Just shut up, Bristol Palin: You are the last person who should talk about birth control

The pregnant Palin gets the facts wrong -- again 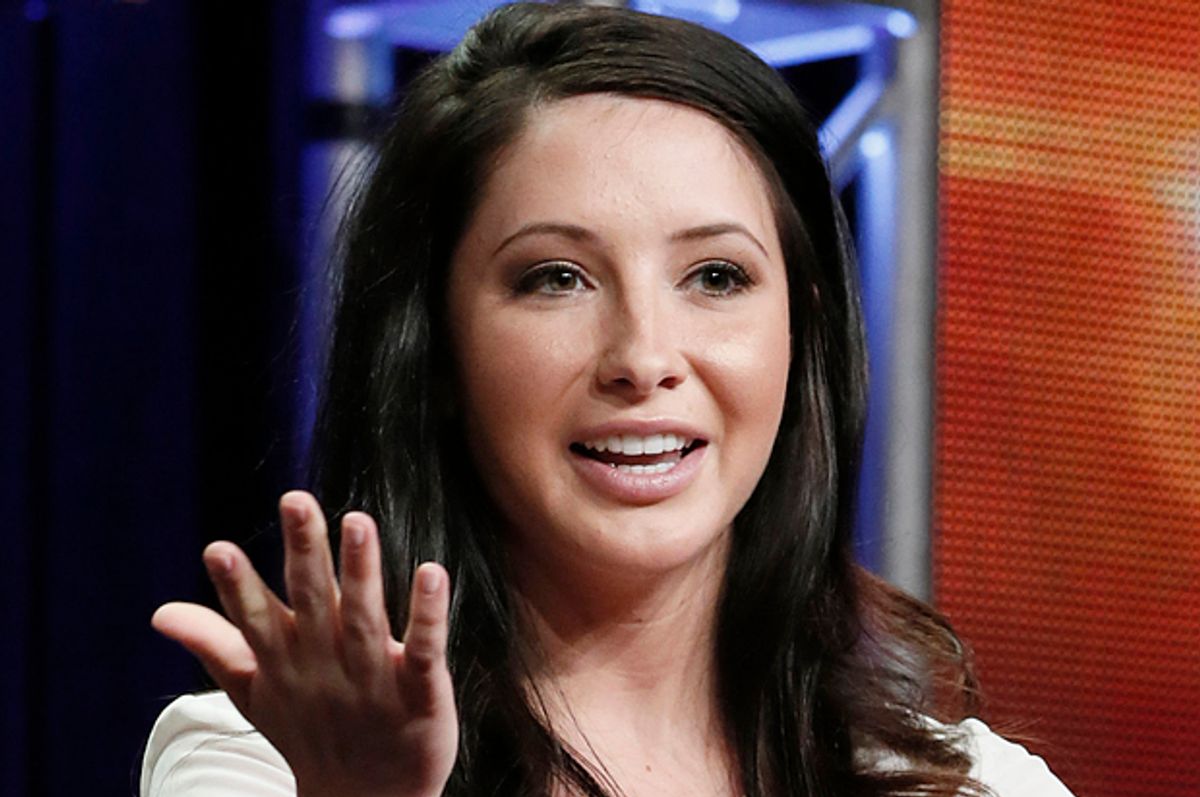 Bristol Palin, I know that you don't care that a lot of us have actually been rooting for you over the past several years. And then you constantly have to go and act like a completely insensitive, ignorant tool.

You've had a lot of obstacles in your life — you've been a small town, teenaged single mom, and frankly, your mother is a goddamn nightmare. This year you went through a broken engagement and the announcement, soon after, that you're pregnant again — not just a major embarrassment for someone who's been a paid ambassador for teen pregnancy prevention but no doubt a genuinely stressful and challenging situation. You're still only 24 years old. You have at times displayed flickering moments of self-deprecation — you've danced on TV in a gorilla suit! And when you went public with your pregnancy, you wrote with a vulnerable candidness, "I’ve been trying my hardest to keep my chin up on this one. At the end of the day there’s nothing I can’t do with God by my side, and I know I am fully capable of handling anything that is put in front of me with dignity and grace. Life moves on no matter what. So no matter how you feel, you get up, get dressed, show up, and never give up." I want to be believe the girl who can look at her life and her choices with that level of self-compassion and hopefulness is capable of saying and doing good things in the world. And then you open your mouth again and it's like, where did that girl go?

In a straight up bonkers recent post on her consistently incoherent Patheos blog, Palin — America's least credible source on the topic of birth control — asserts, "Life isn’t so innocent and carefree for some 10 years old in Washington State. This summer a report came out claiming that some schools in Washington were giving free birth control implants to children as young as 10 years old! These birth control devices are implanted in a girl’s uterus, and all of this can be done without a parent’s consent!" She adds, "It is crazy that the government is offering a controversial form of birth control that can have serious life-long side effects to 10-year-old CHILDREN, but then to do all of this behind a parent’s back is simply outrageous!"

Earlier this year, the conservative site Judicial Watch obtained public records from the state for the past three years that break down the number of students who received birth control implants and their ages. Unsurprisingly, the vast majority of the girls are between the ages of 17 and 20. A small number are between 10 and 12. Before we continue, let's remember here that they don't hand out IUDs at the cafeteria — it's a medical procedure, not, as Judicial Watch suggests, a case of "State Gives 10-Yr-Olds Free Birth Control Implants."

I know this is a radical idea if your last name is Palin, but let's go to the facts. As Snopes explains, "Over half the states in the U.S. allow all minors 12 and older to consent to contraceptive services." That does not mean that they're all having sex -- note how the HPV vaccine is recommended for middle schoolers. But did you know that IUDs can also be used to control periods? It's true. So imagine you're 10 and you're dealing with heavy, difficult menstrual cycles. Maybe you want to explore your options. And if the IUD is so "controversial," why does the American Congress of Obstetricians and Gynecologists say it's safe for adolescents?

Palin acts like schools are tossing IUDs into playgrounds and kids are just running around, grabbing Mirenas without telling their parents. What she isn't doing is: A) Asking if a girl might obtain birth control for a reason other than birth control, B) Considering that just because parental consent is not required that it is never asked for or given. Shockingly, many loving, responsible families understand that as teens get older, many become sexually active, and they want their kids to make smart, healthy choices and protect themselves from unplanned pregnancies. And while Palin is extraordinarily fortunate to have made lemonade of her own circumstances, helping kids avoid unintended pregnancies is great for women, it's great for families, and it saves everybody a whole ton of money in services. She also isn't acknowledging that the reality is that lots of adolescents well over the age of 10 do have sex without their parents' knowledge, so maybe they should go ahead and get contraception without their parents' knowledge too. And wow, you'd think after two pregnancies of her own, she'd finally understand and have a little empathy on that point.