It's not all about you, Bruce and Bono: This is why the Rock Hall is so lame

It's also not the Boss' fault. But as long as Hall of Fame favors personalities over impact, it gets history wrong 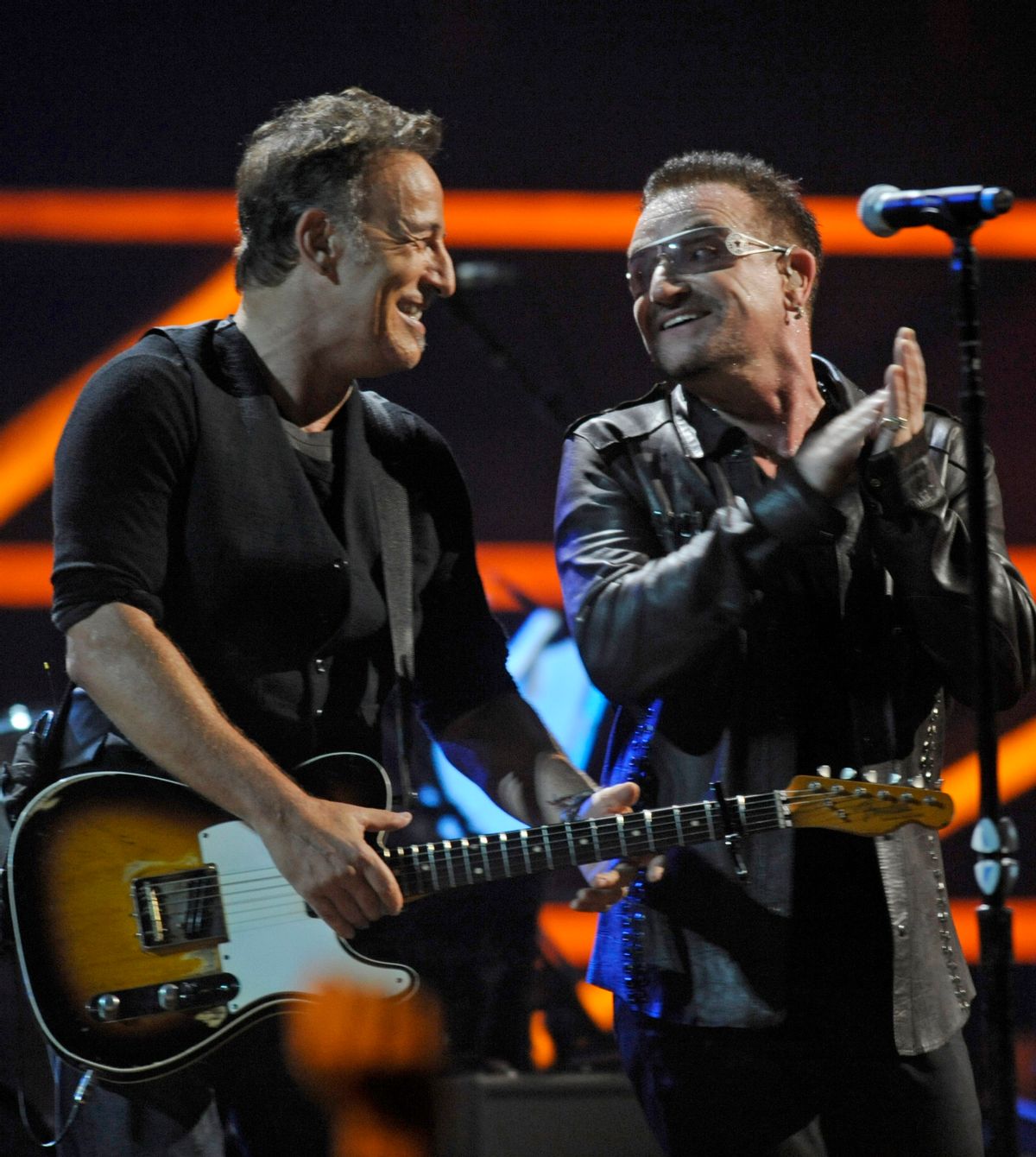 FILE - In this Oct. 30, 2009 file photo, Bono, right, and Bruce Springsteen perform at the 25th Anniversary Rock & Roll Hall of Fame concert at Madison Square Garden, in New York. Springsteen and Coldplays Chris Martin will act as Bono at a concert Monday night, Dec. 1, 2014, in New York City. U2 announced on its website that the singers will perform at Duffy Square in Times Square alongside Kanye West and Carrie Underwood for U2 Minus 1 _ Live in New York Tonight. (AP Photo/Henny Ray Abrams, File) (AP)
--

The history of rock and pop is like a giant iceberg: Only a tiny portion of it is readily visible.

Rock’n’roll can engage you, entertain you and obsess you, regardless of whether you’re aware of the entire iceberg, just the tip, or anywhere in between. In order to love Bruce Springsteen, you don’t have to also know about Ramblin’ Jack Elliot; to enjoy Green Day, you don’t necessarily have to know who Stiff Little Fingers or D.O.A. are; and you can be enthralled by the power of Arcade Fire without ever having heard Pere Ubu, Stereolab, or the Feelies. Like a fractal, the endless permeations of rock and pop are both complete unto themselves and astounding when viewed from a larger perspective.

Creating a monument to the beautiful, complex and diverse history of rock and pop is an exceedingly difficult task. This makes the idea and successful execution of “The” Rock’n’Roll Hall of Fame very challenging (creating a fish-tank full of Hall of Fames targeted towards specific genres and interests would be a more realistic enterprise, though certainly less appealing to HBO). To further complicate matters, those who run the Hall apply a personal bias that diminishes the already limited credibility of the enterprise.

Last week, I addressed one outstanding omission to the Rock’n’Roll Hall of Fame (Kraftwerk). But there’s a lot more to say, including what the new crop of nominees reveal about the organization.

First, let’s address how personal bias is clearly altering the complexion of the Rock’n’Roll Hall of Fame. I only need to say three names: New York Dolls, Todd Rundgren, and the MC5. All clearly belong in any institution honoring creative and stylistic musical innovators who also achieved a high public profile (the omission of the Dolls, inarguably one of the most influential acts in the history of the genre, is especially confounding). These exclusions are so heinous that one can only conclude that somehow, something about these particular acts got under somebody’s skin. If one or more people have the ability to veto deserving artists just because of personal bias, we can basically toss the entire legitimacy of the enterprise out the window.

Other omissions may not be personal, but instead reflect a consistent artistic bias of the Hall. For instance, the Carpenters made exquisite pop records constructed with a grace and skill comparable to Brian Wilson, George Martin, and Phil Spector; they were also a huge part of people’s lives and a generational touchstone. They belong in the Hall as much as other high-pop acts like the Mamas and the Papas, Neil Diamond, and Abba (all selections I agree with, by the way), yet clearly the “While we were listening to Steely Dan and the Doobie Brothers in the 1970s we thought (fill in the blank) were uncool” bias of the Hall is going to block their entry.

How about the Monkees?  They made fantastic music, they contained at least one bona fide musical genius (Michael Nesmith), and they produced not only one of the best rock films ever made (Head), but the strangest and most combative rock TV special ever produced (33 1/3rdRevolutions Per Monkee, which is nothing short of a 60-minute acid blues prime time freak out). But I sincerely doubt the Monkees will ever get in the Hall. Now, listen, and listen close: Joan Jett began her career in a manufactured band, and her most famous hits were written by other artists; it’s arguable (but barely) that she is as artificial a construction as the Monkees, and she’s in the Hall. And true, the Monkees didn’t play instruments on their early hits, but the Dave Clark 5 are in the Hall, and drummer Dave Clark didn’t play on any of his own hit records.

A further problem – and a big one -- is that the people operating the Rock’n’Roll Hall of Fame may know something about the genre, but they don’t know enough. For instance, the 1920s/30s minstrel singer Emmett Miller not only helped mainstream the blues, but his inventive and pioneering vocal style influenced everyone from Hank Williams to Bob Dylan; in his own way, Miller belongs in the Hall as much as Chuck Berry does, but that’ll happen around the same time Jann Wenner calls and asks me to write about Neu! More shockingly, Alan Lomax, the ethnomusicologist and archivist who recorded some of the most important music of the 20th Century (and whose recordings taught everyone from Dylan to the Stones to Zeppelin about authentic American roots music), isn’t in the Hall. I say, without reservation, that Lomax should have been in the first or second Hall of Fame class.

Another flaw of the Hall is a tendency to not pay enough attention to the United Kingdom. Any rock fan outside of the United States would literally find it laughable that Thin Lizzy hasn’t been inducted. And the same applies to Mott the Hoople, another inexplicable omission caused by a careless and ignorant attitude towards British music (they’re trying to make up for that this year by nominating the Smiths, but where’s Joy Division, New Order, or the Cure?).

Oh, and don’t get me started on Motorhead and Slayer. Just don’t. They’re only two of the most influential and visible rock acts of the last quarter century.

On to the 2016 nominees. Cheap Trick certainly belongs in any Rock’n’Roll Hall of Fame; they have credibility, quality, influence, and visibility. But if Cheap Trick are in the Hall, what about Electric Light Orchestra and the Move, two popular bands that were fundamental influences on Cheap Trick? Where do you draw the line and say, “This band is visible, innovative, and popular, but not visible, innovative and popular enough; this act had great influence, but they didn’t influence Springsteen the bands we care about?”

I can’t stand Yes, but they probably belong in the hall. They made conceptually interesting and unique music and were a big part of people’s lives. Chicago are trickier. They were on the radio a lot and they did vaguely interesting things, but are they Hall of Famers? I mean, Madness are a hell of a lot more interesting and ginormous in the UK, but I don’t think anyone’s in a rush to put them in. Steve Miller was also popular during an era that was personally significant to the Hall’s higher-ups and voters; however, Miller had a creative and inventive spark that Chicago lacked, so personally, I’d vote no on Chicago and yes on Miller.

The Cars, an inconsistent and contrived (but generationally significant) band that came up with some very good singles, are probably on their way in, but the idea that they’re going in before Roxy Music or the Modern Lovers is ludicrous. Personally, I’d vote no, unless I knew for sure that they would hand their award to Jonathan Richman, Bryan Ferry, and Brian Eno.

Deep Purple are a no-brainer, a dynamic and influential band who absolutely belong in the Hall. You can’t write the story of heavy metal without them. I’m not a huge fan of Nine Inch Nails, but regardless, NIN are influential, innovative, and successful, and they’re a stone cold yes.

I’m probably a weak yes on Chic, a much weaker yes on Chaka Khan, on the fence-leaning-to-yes on the Spinners and on the fence-leaning-to-no on the J.B.s The J.B.’s are a band of great power and nearly historic impact, but I think regularly inducting bands primarily known via their association with other artists is a dangerous raft to climb on (and one that already sailed, thanks to the ridiculous induction of the E Street Band). Call me when you induct The Witnesses (Louis Prima’s amazing, honking, rollicking and rocking band); then I’ll reconsider.

I don’t think Janet Jackson was any great innovator, and if we’re going to induct state-of-the-art-pop artists who sold gazillions, I’d once again say, “Where are the Carpenters?” But she will draw viewers to the HBO induction show, so that’s a done deal.

Listen, rock’n’roll isn't any one thing. It’s the sound of America's disenfranchised and dispossessed cultures, celebrated, mainstreamed and displayed as art. It’s the angry but ecstatic dynamite of the MC5 and the apocalyptic beauty of Tim Buckley; it’s the dirt-yard hallelujahs of Sid Hemphill and the whorehouse hosannas of ZZ Top; it’s the Southern California Car Dreams of the Beach Boys and the Hollywood Hills Bad Dreams of the Beach Boys. Any attempt to memorialize it within any single building or organization is destined to fail. But it would be nice if the Rock’n’Roll Hall of Fame tried just a little harder; I’d recommend taking a closer look at U.K. innovators and hitmakers, I’d really crawl into the historical alleys where people like Lomax and Miller lie, and most of all, to retain any shred of legitimacy, they have to find a way around the all-too-obvious personal biases that erode the credibility of the Hall enormously.