Hillary vs. Hillary: In the "Alien vs. Predator" cage match between the humane and reasonable debate winner and the cynical neoliberal hawk, do any of us actually win?

Clinton may have clinched the nomination after that debate—but which version of her will we ultimately get? 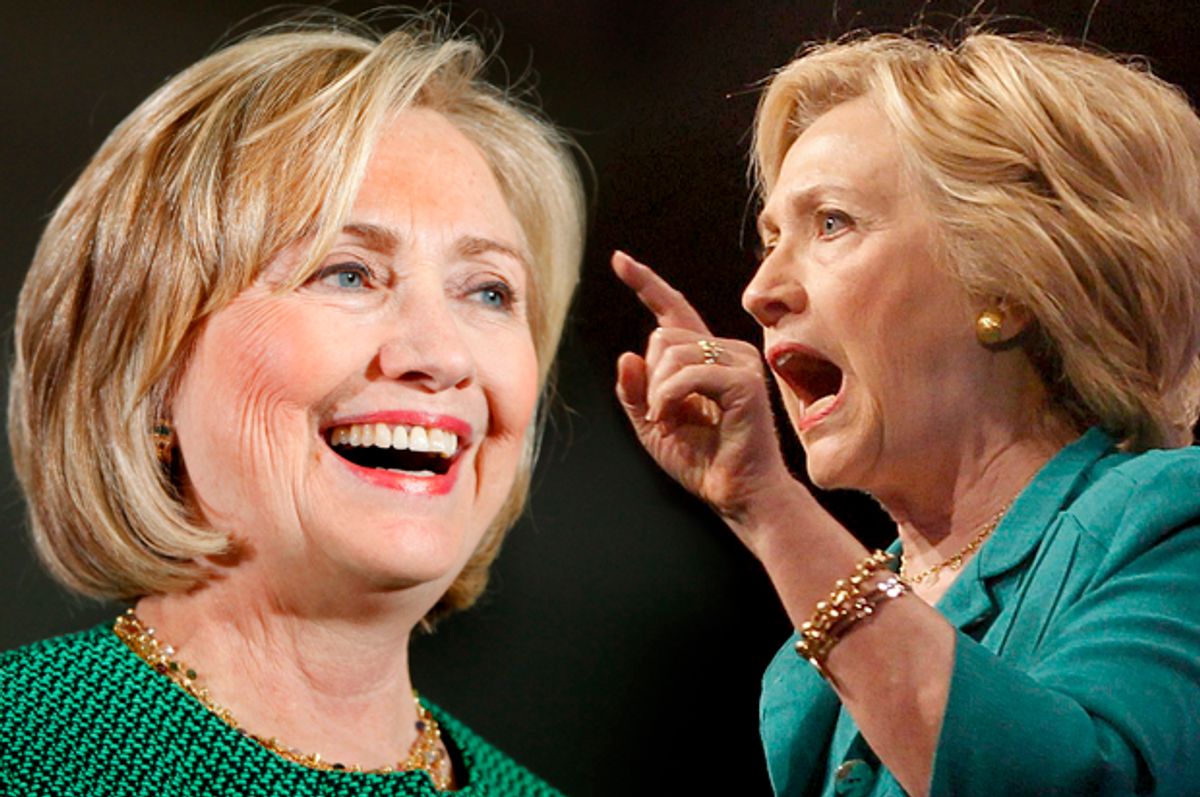 Hillary Clinton’s strong performance in Tuesday night’s Democratic debate in Las Vegas clearly came as an immense relief to her backers and supporters, who have alternately felt offended, perplexed and terrified by the improbable rise of Bernie Sanders. For many people on the Democratic left, not to mention those radicals or progressives with a more agonized or conflicted relationship to the party (or who simply hate its guts), Hillary’s resurgence after many weeks of left-wing rhetorical pummeling also marks the re-emergence of an insoluble paradox.

Which Hillary Clinton will we get, as the presumptive Democratic nominee and as the 45th president of the United States? The humane, reasonable and pragmatic leader who showed up on TV the other night, or the opinion-poll weathervane, foreign policy hawk and shameless Wall Street tool? One Clinton seems to promise a return to effective White House leadership and legislative compromise, with less high-flown rhetoric than the Obama years but greater transparency and more tangible accomplishments. The other suggests a hardened imperial presidency with a friendly female face, where the realm of political reality is defined by neoliberal economics, the Sauron-like reach of the national security state and the global tides of investment capital backed by American military power.

Hillary Clinton’s most formidable opponent on the path to becoming the first female American head of state – a development that will occur embarrassingly late in history, I have to say, after Britain and Germany and Israel and India and Pakistan and Moldova and Senegal, for the love of Christ – is Hillary Clinton. I don’t mean that metaphorically. The monstrous caricature of Hillary Clinton created by her enemies on the right, and to a lesser extent the one created by her enemies on the left, both stand in her way, their bloody fangs bared. So too, and far more significantly, does the reality that has fueled the enduring stereotype that Hillary Clinton cannot be trusted: Her actual record as an endlessly calculating policymaker and political operative whose core ideology has never been clear.

Robert Reich, the staunch liberal economist and former secretary of labor who has known both Hillary and Bill Clinton since all three were classmates at Yale, assured Salon’s readers last spring that he felt no doubt about the strengths of Hillary’s “values and ideals.” Even in that piece of relative puffery, Reich was notably unable or unwilling to explain what they were. A few months later, Reich showed up on Lawrence O’Donnell’s MSNBC show to assign letter grades to Clinton’s economic platform, along with those of Sanders and Jeb Bush. He gave Clinton an A for explaining the central importance of widening economic inequality, but a “C or D or maybe even a failing grade” when it came to explaining what the hell she would actually do about it.

For those of us who will soon face the existential dilemma of supporting Hillary Clinton as the unquestioned lesser of two evils -- however tepidly and against our better judgment -- or turning our backs on the whole damn thing and deciding that “Game of Thrones” is more important, those letter grades delivered by one of her oldest friends sum up the problem. How do we understand the relationship between those two Hillarys, between the A-student analyst and the one who flunks out on actual policy changes that might begin to alter the dark dynamics of money and power in American society? Can we reconcile their areas of overlap and apparent contradiction? Is the first persona a cynical ruse, meant to dupe the gullible Democratic electorate one more time, like Lucy Van Pelt with that football? Does the second persona reflect an understanding that in our disordered nation realpolitik and Machiavellian maneuvering are the only possible ways to get anything done, and the fact that Clinton is too shrewd to make promises she can’t keep?

Those questions will preoccupy Democratic voters, and then the entire nation, for months to come. I don’t propose to answer them here in any definitive way. It’s nearly useless to say this amid the hilariously overheated discourse of the left, but I am neither trying to prop Hillary Clinton up nor chop her down, and I am not so deluded as to believe that I can achieve either objective. (If the great male chauvinist campaign to demolish Hillary, or for that matter the great Establishment crusade to stop Bernie Sanders, would like to ensure my loyalty, they know where to send the check.) A veteran political journalist and insider told me years ago that the only way to say anything interesting about politics was to back away from questions about who will win, or who should win, both because they are self-limiting – a reader either agrees with you or doesn’t – and because they are never as important or useful as the more open-ended questions about why events are unfolding as they are, and what stories we tell ourselves about them.

With all that said, of course the election’s not over just because Hillary Clinton had a good debate, and because lots of well-dressed people in Beverly Hills or on the Upper West Side indulged in a celebratory single-malt on Tuesday night. In fact, the social-media response, along with all those Google searches for alarmingly inadequate dictionary definitions of “socialism,” suggests that Bernie Sanders’ prime-time rollout went pretty doggone well. But the reappearance of Hillary Clinton as a calm, confident, witty and (at least by her standards) personable candidate struck many in the insider class as reassuring evidence that the previously delirious 2016 campaign is coming down from its nitrous oxide high, and that we will soon see political reality reassert its natural laws.

I have a number of responses to that, but here’s what they all boil down to: Be careful what you wish for, O punditocracy! On the Republican side, it is indisputably true that the great sky-obscuring blimp of Donald Trump’s candidacy is beginning to sag and list hither and yon with the shifting winds. Whether the huge crowds who eat up Trump's outrageous pronouncements and outsize persona were ever likely to translate themselves into real-world votes was always open to doubt. I mean, come on: Who votes anymore? The Trump demographic largely consists of people who have concluded that politicians are corrupt and elections are pointless, and it’s difficult to fault their logic. Those who claim to understand things like probability and plausibility and polling data and campaign spending in ways that I would never pretend to are confidently pronouncing that Trump and Carly Fiorina and Ben Carson are daylilies doomed to fade, and that Jeb Bush or Marco Rubio will be beaming down at us from the sun’s face before we know it.

It is equally true that even Bernie Sanders’ true believers are beginning to cast a cold eye on the political calendar, which informs them that after Iowa and New Hampshire in early February come primaries and caucuses in 23 states over the ensuing five weeks, and that Sanders will be extremely fortunate to win four or five of those. He will quite likely be competitive with Clinton in Colorado, Massachusetts, Minnesota, Maine and his home state of Vermont, and might be able to keep it close in Virginia, North Carolina and Michigan. Anything beyond that is wish-casting, pure and simple. Give Bernie any six states of your choosing, just for the hell of it, and the race will still be over after the Florida, Illinois, Missouri and Ohio primaries on March 15, at the very latest.

Again, that isn’t meant as an endorsement, and it isn’t the important part. If the whole thing were up to me – well, let’s just be glad it isn’t. That long, cold drink of political probability is good news for Nate Silver and Karl Rove and the Koch brothers and other people who have a vested interest in not being wrong, and in restoring the universe of American electoral politics to its normal (and profoundly depressing) parameters. But it isn’t good news for the rest of us, and it might not even be good news for Hillary Clinton or for whichever supposedly mainstream Republican – stretching that concept to a ludicrous extreme – emerges from the GOP’s tragicomic primary scrum.

If Donald Trump and Bernie Sanders have accomplished anything, they have made this election seem like fun. On some level it’s no more complicated than that. They have injected the somnolent political process with unpredictable electricity, and no one knows what will happen when all that energy is discharged into the ether and we are faced with the disheartening prospect of a nine-month campaign between two candidates who cannot afford to say what they mean or mean what they say, and who almost no one actually likes. A showdown between Clinton and Marco Rubio next November (let’s just say) might be historically important -- and also might be close enough to make us all sweat. But the "Alien vs. Predator" cage match between Hillary Clinton and Hillary Clinton is the main event, the one whose outcome will shape history and is shrouded in doubt. Does any of that sound like fun? I fear the fun is just about over.