Rathergate and the dark magic of 2004: When the GOP learned how to subvert truth and alter political reality 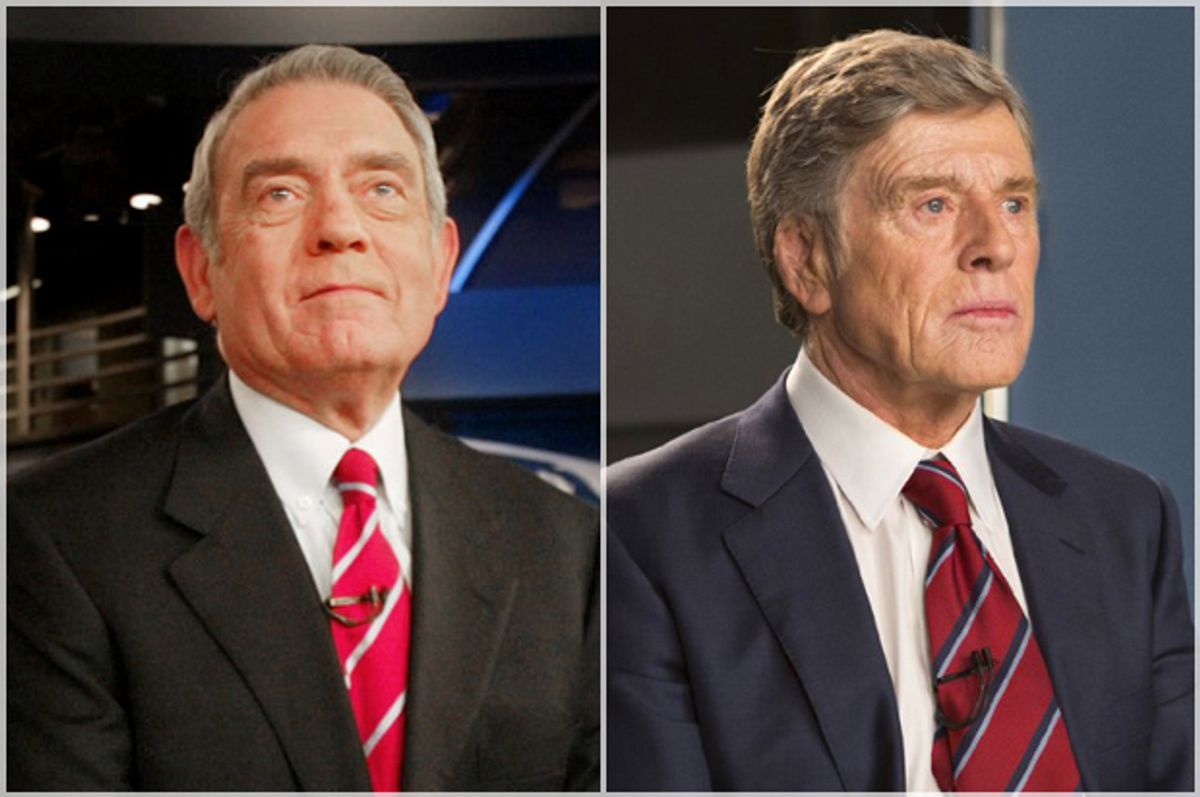 Most of us, I would assume, have eagerly erased all memories of the dismal 2004 presidential campaign between George W. Bush and John Kerry, and for good reasons. It was the post-9/11 election, with each candidate trying to out-pander and out-patriot the other: Remember Kerry snapping off a salute to the Democratic convention and announcing that he was “reporting for duty”? I hope not. Bush was re-elected -- if we accept the fiction that he had ever been elected in the first place -- even though his war in Iraq went badly south that year and the neocon dream of a Pax Americana across the Middle East was clearly falling apart. Indeed, 2004 gave us the only presidential election in the last six in which the Republican candidate won the popular vote.

That campaign lacked the drama of the “hanging chad” stolen election of 2000 or the post-crash Obama landslide of 2008 (although that one also feels like a generation ago). In keeping with the supposed mood of shared trauma and national comity, the two candidates affected not to dislike each other, and expressed their policy differences only in the context of their boundless and unquestioned love for America. But Mary Mapes has not forgotten that election, and neither has Dan Rather. Painful as all of this is to recall, there are reasons we should not forget it either.

Mapes was the CBS News producer who put together Rather’s infamous September 2004 report on "60 Minutes" about George W. Bush’s dubious service record in the Texas Air National Guard, a glamorous flyboy unit that played host in the late ’60s and early ’70s to numerous scions of prominent Lone Star State families who were less than eager to serve in Vietnam. After the story became the focus of a furious Internet-based right-wing counterattack over the disputed authenticity of two documents, which were not essential to the overall case, Rather was forced to resign as anchor of the "CBS Evening News" and Mapes was fired, along with several other executives and producers. (She never worked in TV journalism again.) When paired with the third-party “Swift Boat ads” attacking John Kerry’s record of actual service in Vietnam (and his actual war injuries), Rathergate announced the advent of a new form of Republican political black magic, which could distort reality so severely that truth became lies and lies became truth.

James Vanderbilt’s tendentious docudrama “Truth,” which stars Cate Blanchett as Mapes and Robert Redford as Rather, is not a particularly good movie. It’s full of plucky newsroom banter, colorful Texas coots and craven corporate suits yelling at people. Blanchett uses essentially the same upper-crust American accent that won her an Oscar in “Blue Jasmine” to play Mapes, who grew up in modest circumstances in the Pacific Northwest. Redford, who has never played anything except the “Robert Redford role,” doesn’t look or sound anything like Dan Rather. But along the way, “Truth” makes the point that when right-wing operatives (in this case Karl Rove, Bush’s Gollum-like strategist) discovered that they could topple America’s most venerated newsman over sloppy reporting shortcuts in a story whose basic facts were not in dispute, then or now, a Rubicon had been crossed.

Whether Rathergate actually won that election for Bush is debatable; in the great Democratic middle-road milquetoast tradition of Al Gore and Michael Dukakis, the dithery, soporific Kerry campaign did everything it could to ensure defeat. But that whole episode clearly boosted Republican morale and made Rove and his minions feel that they were in control of the narrative and had the power to transform any possible negative into a positive. Rathergate was certainly not the first counterfactual counterattack strategy in American political history, and was not quite the birth of the right-wing blogosphere (which had surfaced, in embryonic form, during the Clinton years), but it marked a crucial evolution on both fronts. From 2004 flowed many blessings, at least for those who sought to control political discourse and popular perception and in so doing alter the nature of reality.

Suddenly all things were possible, and America became an endless episode of “The X-Files,” brought to you by faceless men in nice suits who are eager to warn you about the ravages of government and the duplicity of the “liberal media.” Every delirious resistance hypothesis previously promulgated by retired pharmacists who hand out mimeographed screeds in the mall now became a conduit for sowing widespread bewilderment and disempowerment. Climate-change denialism and birth-certificate trutherism. Death panels. Benghazi and Planned Parenthood. Every single aspect of what was once Tea Party ideology and has now become Republican orthodoxy, especially the upside-down economics in which high taxes (which are at historic lows) and social spending (which has been slashed) are reducing Americans to poverty and misery, rather than, let’s just say, a pointless $4 trillion war or the intensifying concentration of wealth at the very top of the pyramid.

In watching “Truth,” I remembered why I hadn’t paid much attention to Rather’s original story or the ensuing scandal at the time. Partly because the whole thing seemed to get lost in boring technical minutiae and partly because there were much better reasons to hate George W. Bush than whatever scams he had pulled as a young man to stay out of a stupid and dangerous war. I get that in the flag-waving context of 2004 it made him look like a hypocrite, but I totally didn’t care and still don’t. My older brother starved himself down to 130 pounds (at 6’3”) in order to fail his medical exam during the Vietnam era; some of his friends fled to Canada or faked mental illness or told the draft examiners they were gay when they weren’t.

Mapes and her investigative team dug up a decent amount of documentary and circumstantial evidence that wasn’t especially explosive but tended to support the rumors that had long swirled around Bush’s National Guard years. Bush or his dad, who was then a congressman representing an affluent Houston district, had apparently pulled strings to get him into the unit in the first place, and the young lieutenant had received all sorts of preferential treatment: He skipped a physical exam that might have included a drug test, got a yearlong transfer to an Alabama Guard unit but never showed up there (with no consequences), and finally got an early discharge so he could attend Harvard Business School. News flash: Rich kids have it easy.

But Mapes and Rather couldn’t get any of Bush’s superior officers or Guard comrades to go on camera and testify that the future president had been a youthful hell-raiser who had essentially ditched his military commitment but was seen as politically untouchable. That was hardly surprising, but it was also what lured them into Karl Rove’s alternate universe -- and perhaps, according to some theories of the case, into a trap that Rove or Roger Stone or some other GOP Sith lord had laid for them. This gets played out in “Truth” (which is based on Mapes’ memoir) at far more length than it deserves, but the short version is that they got hold of photocopied documents that purported to be memos from Bush’s commanding officer, complaining about his young lieutenant who had gone AWOL but who couldn’t be disciplined for it.

Those memos provided exactly the evidence Mapes needed to lock down the story, which might have been her first clue that something was wrong. Since her source did not have the originals -- and told bizarre and contradictory stories about who had given him the copies -- document experts could only make guesses as to their provenance and authenticity. Hilarious as this may seem in retrospect, none of the professionals paid by CBS News to examine these documents noticed that the typeface and font size and kerning and margins of military memos supposedly composed on an electric typewriter in the early 1970s precisely matched the default settings in Microsoft Word.

If the account in “Truth” is any indication, Mary Mapes still believes those documents were authentic, or perhaps that their content was genuine but the physical copies she had Dan Rather present on “60 Minutes” had been retyped by unknown persons for unknown reasons. Of course I have no idea and maybe that’s so, but the whole Microsoft Word default settings problem is pretty difficult to get past. On one level, I get it: Mapes sees herself as an old-school, award-winning journalist who got railroaded for doing her job, and she’s right about that. She doesn’t want to admit that she got bamboozled by an easily detectable forgery into a dumb mistake that undermined a good muckraking story, sent Dan Rather into early retirement and drastically accelerated the downsizing, fluff-ification and corporate evisceration of the entire TV news business.

As the title of this mediocre movie suggests, Mapes -- or at least the heroic version of her scripted by James Vanderbilt and portrayed by Cate Blanchett -- can’t get past the idea that the truth matters, whether it’s the truth about those admittedly puzzling documents, the truth about the long-ago military record of a former president we would all rather forget, or truth as the brilliant white beacon toward which all news reporting strives. But the factual accuracy of her “60 Minutes” story wasn’t the point in 2004 and is irrelevant today, when Karl Rove and the Koch brothers and the stewards of the global economy have moved long past such limited conceptions of truth,. Truth is not about finding a superscript “th” key on a vintage typewriter (an actual question of fact in Rathergate). It’s about telling a story that people want to believe. The kinds of stories that Mary Mapes and Dan Rather used to tell on CBS News didn’t make Americans feel good, and so they became untrue and were left behind.