Forget the war on drugs: Alcohol ruins more lives than all other drugs combined

Why aren't policy makers wringing their hands over this? 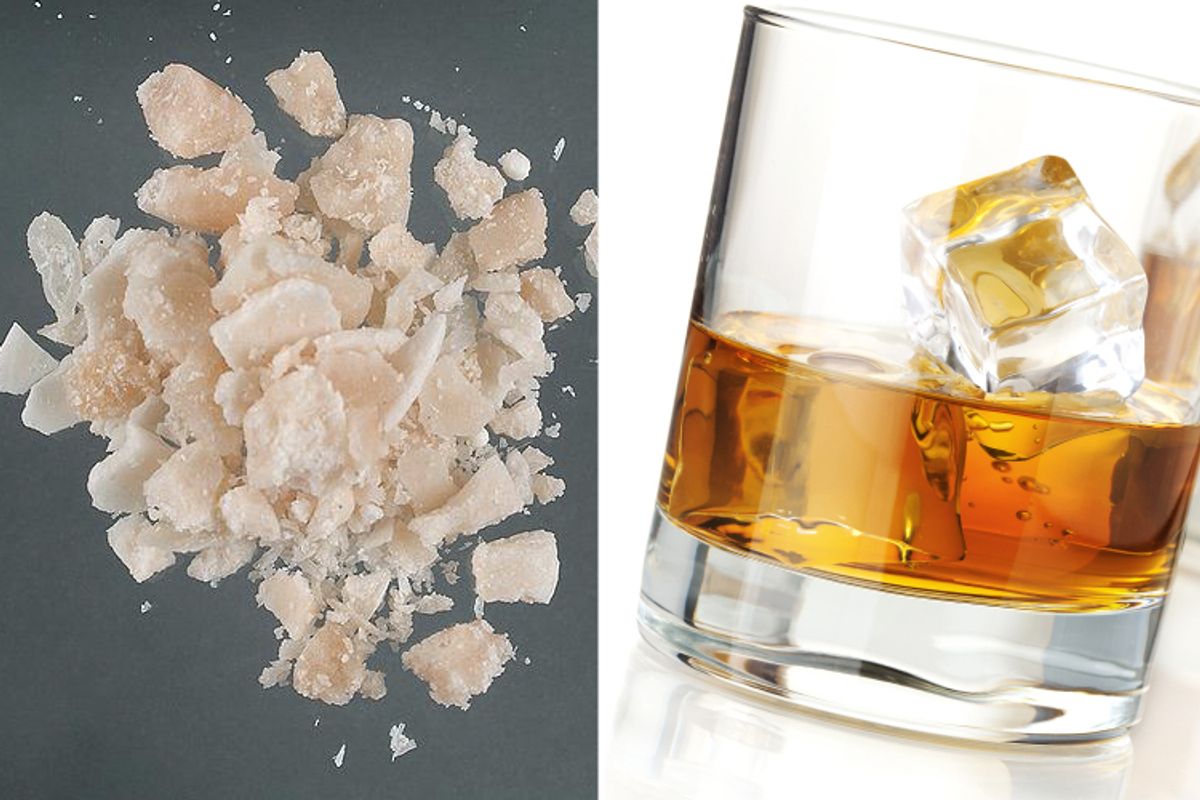 While our current political conversations often involve concerned discussions about marijuana’s imagined dangers or potential benefits (recall that the most recent Republican and Democratic debates both dedicated time to the question of pot legalization), our most problematic relationship actually seems to be with alcohol. America, it seems, has a drinking problem—and studies indicate it is only getting worse. There are real reasons, in addition to the pressing issue of mass incarceration and the failure of the drug war, for us to start thinking seriously about the cost of our increasing reliance on alcohol when we consider the ravages of drug use. Particularly since the toll of alcohol, though often left out of that conversation, actually outpaces those of every other legal and illicit drug combined.

Drinking is on the rise in the U.S. Precipitously. A study released this year from the Institute for Health Metrics and Evaluation finds that heavy drinking among Americans rose 17.2 percent between 2005 and 2012. Not only are Americans drinking more, but in an increasing number of cases, they’re consuming those drinks in rapid succession. The same study found that binge drinking increased 8.9 percent nationally during the same time frame. In 2012, 8.2 percent of Americans were heavy drinkers, meaning they had one drink per day on average over the course of a month. An additional 18.3 percent of Americans that year fit the description of binge drinkers, defined by the CDC as men who have five or more drinks and women who have four or more drinks in a single drinking session.

It's women, by the way, who have largely driven these increases. In the years between 2005 and 2012, binge drinking increased just 4.9 percent among men, but jumped 17.5 percent among women. The reason for such a significant rise is likely due to changing social mores, according to Tom Greenfield, scientific director at the Alcohol Research Group, who spoke with Kaiser Health News. Men still drink more than women do, but women have narrowed the gap in recent years.

Binge drinking, always a favorite sport on college campuses, has also become more prevalent. A 2013 study from the Center for Addiction Medicine at Massachusetts General Hospital found that women in college binge-drink more often than male students. "It's not that the percentage of young people is increasing alcohol use," George Koob, the director of the National Institute on Alcohol, told NBC News. "It's that bingeing is more intense."

Even with so many Americans drinking more, the actual proportion of Americans drinking is the same as it’s long been. Per the HME study, “56 percent of people in the U.S. consumed...alcohol in 2005 [through] 2012.” Ali Mokdad, the lead researcher on the HME study, told USA Today, “The percentage of people who drink is not changing much, but among drinkers, we are seeing more heavy drinking and more binge drinking. We're going in the wrong direction."

In big picture terms, the wealthiest and most educated people are most likely to drink. A Gallup poll released earlier this year confirmed that more affluent Americans drank more often than their poorer peers. “Whereas eight in 10 adults in these socio-economic status groups say they drink, only about half of lower-income Americans and those with a high school diploma or less say they drink.” (There was a racial component as well: 69 percent of non-Hispanic whites say they drink alcohol, compared with just 52 percent of nonwhites.) The reasons for the class discrepancy are likely varied; Gallup theorizes that greater means leads to more frequent involvement in activities that involve drinking, such as going on vacation, dining out and socializing with coworkers.

It also seems likely that the culture of overwork in professional environments contributes to heavier drinking. As office hours grow longer and the average workweek increases, so too does the need to blow off steam. Not to mention that drinking is ingrained in many office social cultures. As Tom Greenfield points out, “The influx of young, wealthy professionals in San Jose, Oakland and San Francisco—many in hard-working, hard-partying tech jobs—may have helped spur the Bay Area’s significant increase in binge-drinking rates.” Big jumps in drinking rates in Silicon Valley (Santa Clara county saw a 28 percent increase in drinking between 2002 and 2012, the largest increase in California) further support this idea.

In a 2009 New York Times piece, Arthur C. Brooks suggests that goal-driven, ambitious people drink because success often feels hollow. Brooks writes that scaling the ranks “may initially relieve stress as people rise into the middle class, [but] it seems to introduce a whole new set of stressful problems for those who keep climbing.” Brooks rhetorically poses, and then answers, the question of coping mechanisms:

“Here’s one that many people try: Drink a lot. Research from 2010 found that people with high incomes reported consuming more alcohol than people of more modest means. Specifically, 81 percent of respondents making over $75,000 per year drink alcohol, versus 66 percent of those making $30,000 to $49,000 and 46 percent earning under $20,000.”

It seems important to recognize that while more affluent people drink on average, the consequences of drinking are often less severe than they are for poorer Americans. Researchers suggest this is partly because, despite drinking similar amounts, poorer people tend to drink to excess more often than wealthier people, who spread their consumption over more time. One study, cited by Psychology Today, found that upper-middle-class drinkers generally had 2-3.5 alcoholic beverages each day. “Conversely, people close to the bottom of the income ladder mostly divide into two extremes. Either they do not drink at all, or they drink to excess.”

"Educated, affluent [people] enjoy a glass of wine every night," Ali Mokdad told USA Today. "They can afford it, and they are cautious about their health."

But Diane Hietpas, of the Menominee Tribal Clinic in Keshena, Wisconsin, seemed to offer the most insightful take on the issue. "[P]eople don't understand that this is a symptom of a much larger problem of poverty and trauma," Hietpas told the paper. "Our people are hurting." Following years of recession, war and social upheaval, it seems likely that her statement has applications across socioeconomic groups.

The price of drinking is astronomical in every way. A recent report from the Centers for Disease Control finds that binge drinking among Americans costs the country nearly $250 billion annually in lost productivity in the workplace, alcohol-related crimes and treatment for the health issues that result from excessive alcohol consumption. While the wages of Americans’ boozing have always been pretty high, the study notes that costs have notably increased in recent years. In 2006, the price of binge drinking for the nation was $223.5 billion, the equivalent of $1.90 per drink. By 2010, the figure rose to $249 billion, or $2.05 a drink. Perhaps unsurprisingly, the lion’s share of those costs, 77 percent, were related to binge drinking.

Of far greater concern should be the ways in which alcohol destroys lives. The CDC estimates that alcohol was linked to 88,000 annual deaths in America between 2006-2010, while the agency found that 38,329 people died of drug overdoses in 2010. According to the Foundation for a Drug-Free World, alcohol is the cause of death for more American teenagers than all other drugs combined, and is “a factor in the three leading causes of death among 15- to 24-year-olds: accidents, homicides and suicides.” The New York Times reports that, on average, six Americans die of alcohol poisoning each day. Three quarters of those who died were 35 to 64 years old. And 30 percent of Americans report that they’ve had enough struggles with alcohol at some point in their lives that it could be considered a problem.

Drinking is, in many ways, America’s pastime. But unlike other culturally shared activities, it often carries a hefty cost. None of this is intended to diminish the impact of a number of other social ills that desperately need to be addressed. Yet it does seem clear that misplaced fearmongering about, say, medical marijuana should be less of a legislative item than how we drink and why we drink, and how we can drink less.