Stop cheering for the old "Hands off my daughter!" shtick

The media's reaction to a viral "whatever you do to my daughter, I do to you" photo shows how little we value girls 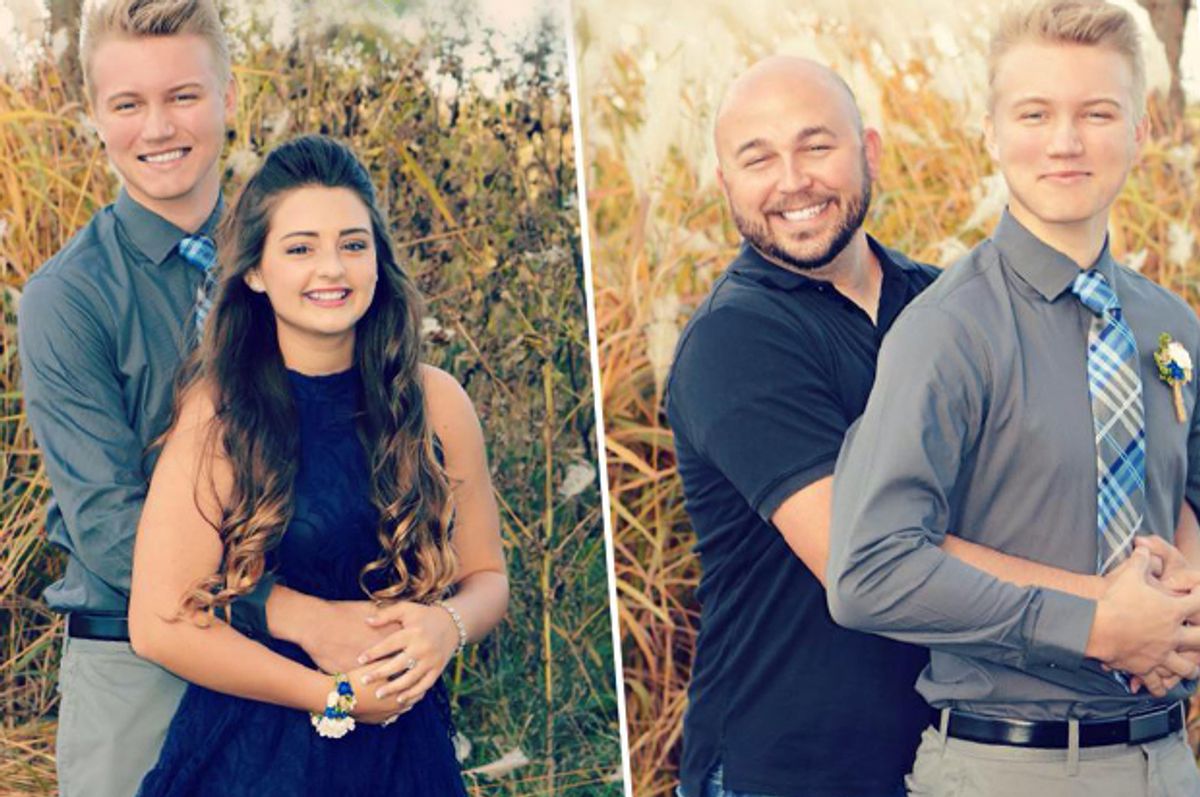 Bangor, Wisconsin father Benjamin Schock seems like a good-natured guy who can appreciate the humor in the whole Papa Bear routine. And his wife, photographer Sharee Schock, also tells Buzzfeed that "her family is focused on having fun and being positive, especially since her husband is currently battling multiple brain tumors." I hope that the whole family has as much fun and laughter in their lives as possible right now, and that they have many more happy memories to come. I also get that not every moment of joshing around is an act of oppression by the patriarchy. So when the Schock's 15-year-old daughter Ricarra posed with her date for photos before the homecoming dance earlier this month — and then Benjamin stepped in for a similar image, standing with his arms clasped around the boy for a shot captioned, "Whatever you do to my daughter, I will do to you" — of course it was all in fun.

Sharee Schock explains to Buzzfeed that "My husband had mentioned previously in humor that he would do to the boyfriend whatever was done to our daughter. So he jumped in the picture and they posed for the picture." She adds, "My husband is a big-hearted teddy bear, so it was his way of being silly with a pinch of 'I'm watching you, buddy…. We hope that above anything else this pictures shows the love and protective nature of a dad with his little girl, but in a playful and not-so intimidating manner." Schock recently put the photo on her photography business page on Facebook, calling it the "Funniest moment of Homecoming." That's when it took off like crazy — it's been shared over two thousand times on Facebook, and racked up nearly three million views on Imgur.

And see, once you get past a million shares on something like this, I'm going to step in to play Humorless Feminist Mom to the Hands Off My Daughter Industrial Complex. Because I have a 15 year-old daughter, too. And when Buzzfeed runs a story like this above the invitation, "Want great parenting tips in your inbox twice a week?" I question whether this constitutes "great parenting tips." When Fox LA reports, "Dads will be dads! A hilarious photo shows a dad posing with his daughter's homecoming date before the teens went to a homecoming dance in Wisconsin," I think that merits some skepticism over whether that's just "Dads being dads." And when Seventeen approvingly reports on this as a tale of "Dad for the win," I'm sorry but now I'm going to have to blow a gasket.

What one family does in the spirit of kidding around is, in context, no big deal. But a media endorsement — especially media aimed at teenage girls — of the notion that adolescent female sexuality is something to be guarded by daddy from outside invaders is actually creepy and gross. It suggests that this isn't about the Schocks any more — it's about "dads being dads," and isn't it cute when a father steps in to police a girl's private life? Isn't what goes on with the person a girl dates just a story of what one male does — or tries to do — to another male's property? Aaaand now we're getting very territorial and messed up. I'm sorry, does a girl get a vote in what happens in her romantic life? It's called agency. It's called bodily autonomy. Live it, learn it!

The Overprotective Dad trope is a timeless punchline. Dads are supposed to protect and love their children. They are also supposed to raise them so they can grow into adults who make their own decisions. But when we talk about "what you do to my daughter," it implies that what happens in dating is something that is done to girls, who are mere passive recipients. It depicts boys as inherently predatory — and even if it's in a jokey way, that's insulting to them too. And that's not really how it works, or certainly not how it should, if we're raising both our sons and daughters to take ownership of their choices and actions. It's definitely not something that merits widespread, legitimizing approval. And when one family's offhand joke becomes a viral reinforcement of the old message that a girls' sexuality is somehow a negotiation between her father and her boyfriend, it's just not so funny any more.