"This is not what a rapist looks like": How this student's defensive rant misses the point about sexual consent 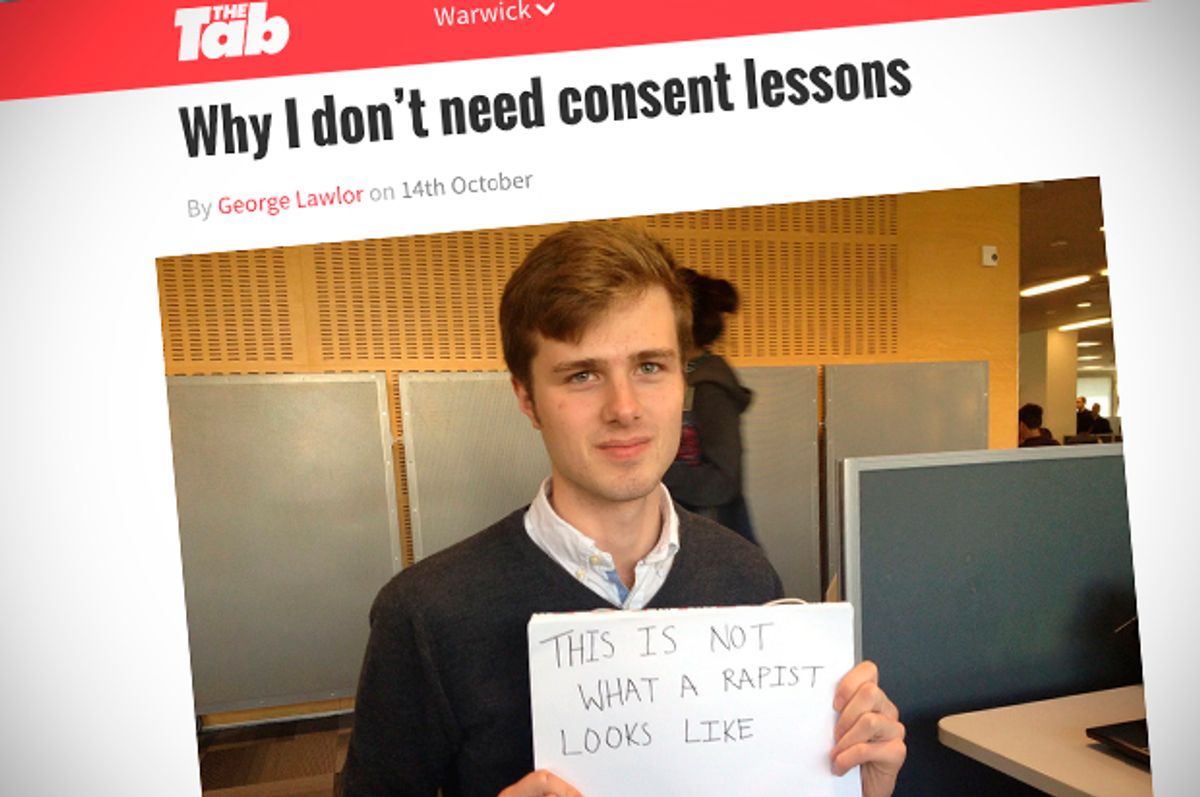 (The Tab/Screen montage by Salon)
--

George Lawlor is a student at the University of Warwick. He is the communications secretary for its Conservative Association. He is in his own description, an "abysmal journalist at worst, slightly above mediocre at best." And he is angry.

In a controversial recent post for The Tab, Lawlor describes his initial excitement — which quickly turned to outrage — at an invitation that he received on Facebook. As he explains, "You’ve been summoned to this year’s 'I Heart Consent Training Sessions.' Your crushing disappointment quickly melts away and is overcome by anger." He goes on to explain, "Like any self-respecting individual would, I found this to be a massive, painful, bitchy slap in the face. To be invited to such a waste of time was the biggest insult I’ve received in a good few years. It implies I have an insufficient understanding of what does and does not constitute consent and that’s incredibly hurtful. I can’t stress that enough."

Because he was invited to a consent training event. An invitation that read, "These interactive 90-minute sessions provide a safe space for you to discuss the myths and facts around sexual violence. Our team of trained Warwick students will guide you through discussion of definitions of consent and healthy relationships."

Well, how dare they.

Lawlor goes on to state firmly that "I don’t have to be taught to not be a rapist. That much comes naturally to me, as I am sure it does to the overwhelming majority of people you and I know. Brand me a bigot, a misogynist, a rape apologist, I don’t care. I stand by that." Continuing to cite absolutely zero facts or data, he insists, "The only people who’ll turn up will be people who (surprise, surprise) already know when it’s okay to shag someone…. Self-appointed teachers of consent: get off your f__king high horse. I don’t need your help to understand basic human interaction. Secondly, go and do something. Real people need your help and they deserve better than you. Next time you consider inviting me or anyone else to another bulls__t event like this, have a little respect for the intelligence and decency of your peers." The feature is accompanied with a photograph of him, holding a sign that says, "This is not what a rapist looks like."

Lawlor, who has recently written on the pain of being a skinny guy who doesn't "get as much sympathy as fat people" and the tragedy of apostrophe misuse, definitely seems sincere in his degree of umbrage taken. And if he says he has a built in aversion to non-consensual behavior, great. What he — and the fellow student who penned a similarly dyspeptic piece for (of course) Breitbart asking, "Why would any normal, right-thinking man attend a class that demonizes them and normal, healthy male sexuality by pretending that all men are latent rapists who would take advantage of women if they thought they could get away with it?" — seem tremendously invested in is misreading a situation because it bruises his ego.

Lawlor's entire argument is fascinating — note how quickly he derides an invitation that was likely sent to a large group of students and not as some specific dis to him as "bitchy." Note how swiftly he resorts to calling the initiative "bulls__t" to telling the organizers to "get off your f__king high horse," and to boldly assert that he is not a rapist because he doesn't look like a rapist. I'm going to generously assume the guy is young, so he doesn't understand the difference between inviting people to get educated on a topic and assuming that they're sex offenders, but I do have questions. Like, what the hell does he think rapists look like, what makes him think anyone's accusing him of behaving like one and why is he so outraged at the idea of sex education?

Writing a rebuttal in The Tab, student Josie Throup admits she's "angry" now too. "I’m not sorry my workshop made this writer feel uncomfortable," she says. "The first time I was confronted with the statistic that 80 per cent of rape survivors know their attacker, I felt the same. When I thought about this and realized most rapists are normal members of society, I felt sick. I still do feel sick when I think about the cycles of abuse perpetrated by partners, parents, and friends of people I know." Two years ago, journalist — and rape survivor — Zerlina Maxwell made a similar argument, saying, "You’re talking about this as if it’s some faceless, nameless criminal, when a lot of times it’s someone you know and trust." And she drew howls of protest when she added, "If you train men not to grow up to become rapists, you prevent rape."

But consent initiatives do seem to work — after a 2011 Canadian campaign rolled out with the simple plea to "Don’t Be That Guy" sexual assault rates dropped ten percent.

Opening up the conversation to explore the issues of boundaries and consent is not an affront to any one man in the room. The invitation to the workshop, by the way, didn't even mention gender. Nor did it use the word "rape." So why did Lawlor and his supporters presume this is such a "bitchy" enterprise, ignoring that consent is not an exclusively hetero male to hetero female negotiation? Why did they take the stance of personal outrage, instead of thinking, "Hey, I'm not a rapist, so I can be useful here. Maybe I help"? And instead of asserting the pointless objection that he doesn't look like a rapist, maybe Lawlor instead could have asked, "Do I look like a person who has things to learn, and things to teach?"