Don't feed the Shkreli: The Turing Pharma CEO's pathetic Twitter antics are about as funny as his price-gouging 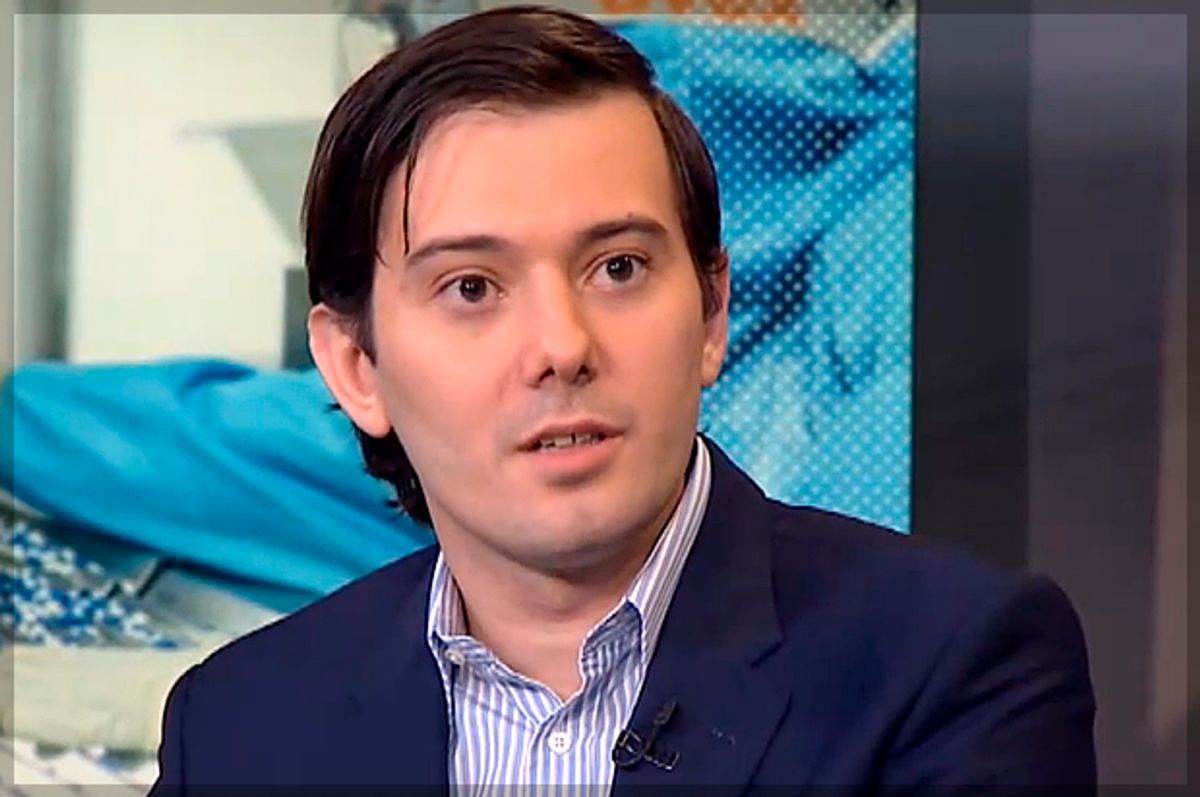 If this were a rom-com, Martin Shkreli and Bernie Sanders would be about twenty minutes away from a breathless confession of love before somebody's plane takes off. But this is ostensibly the real world, so instead we're just going to keep being subjected to Shkreli's strange, dubious and Sanders-obsessed Twitter feed. So glad you made your timeline public again, sir — because this stuff is fascinating.

Turing Pharmaceutics CEO Shkreli, you will recall, gained instant infamy last month when it was revealed that his company had raised the cost of toxoplasmosis drug Daraprim overnight from $13.50 to $750 a pill. Outrage ensued. The Infectious Diseases Society of America sent the company a plea stating that "This cost is unjustifiable for the medically vulnerable patient population." John J. Castellani, president and CEO of the Pharmaceutical Research and Manufacturers of America issued a statement that "We do not embrace either [Turing's] recent actions or the conduct of their CEO." Both Hillary Clinton and Bernie Sanders spoke out against the "price gouging" and a whole lot of people were pretty horrified — especially when they looked through Shkreli's brag-heavy social media profile.

So Shkreli seemed to then do what comes next in these situations — he went on television to vow that "We’ve agreed to lower the price on Daraprim to a point that is more affordable and is able to allow the company to make a profit, but a very small profit," went quiet on Twitter, and announced a "very expensive, well articulated" plan for rehabilitating the company's image. That didn't last too long.

By last week, he was back on Twitter in full force, trolling journalists who "smell liberal" and explaining the lack of movement on adjusting the cost of Daraprim with a brisk, "Until we figure out demand, we won’t lower the price." But when he attempted to donate to Sanders' campaign and get a meeting with the man in the process, he was summarily rebuffed.

And now, it's just getting weirder. In just the past few days, he's announced to the world that "All trolling aside, I've been inundated with support, resumes & even women who want a date. To think the whole world dislikes me is foolish," and talked about Bernie Sanders. A lot. Of particular outrage to Shkreli was that Sanders is now using the Turing CEO in his fundraising outreach. "I don't need money from the billionaire class" the emails read — a rejection too horrible for Shkreli to fathom.

Shrkreli claimed that "The email contains multiple factual errors regarding myself and my business which i am now exploring legal action against." The whole thing made him, and I quote, "FURIOUS!!111." In fact, he was "SO ANGRY AT @BernieSanders I COULD PUNCH A WALL!!!!!!!!!!!!!!!!!!!!!!!1" He then followed up his rage tweet with a petulant "Ugh, does anyone know how to treat a wrist fracture without going to a hospital?" and a claim that, unlike lowering the cost of Daraprim, he'd actually made good on that promise, "and now one bone is sticking out." Yet despite his insistence that "i broke my wrist over @BernieSanders" — and a photo of an x-ray with his name on it and another with his arm in a brace — the story didn't quite add up. As a sharp eyed-tweeter named Mike Leemann noted, the x-ray bears a remarkable resemblance to a Medscape image of a fractured wrist. Soon after, he posted a photo of himself "Bored playing guitar." He then retweeted someone else saying, "Please stop falling for @MartinShkreli's very basic boring trolling. he didn't punch a wall. he's making fun of you."

Look, if you're just some finance guy who wants to tell the world how FURIOUS!!!111111 he is at Bernie Sanders or engage in possible acts of violence against walls, who cares? If that's what's keeping you entertained while you're dealing with the $65 million lawsuits from your former employers or the accusations of harassment, have at it. But this is the head of a company that is buying and developing medicine, potentially your medicine. A guy whose company's page for its board of directors is strangely blank. (I wonder why?) A guy who's busy yelling on social media "WILL EVERYONE PLEASE STOP USING THAT UGLY PIC OF ME. I HATE BLOOMBERG FOR TAKING IT--THERE ARE SO MANY BETTER ONES!!!!!!!!!1111111ONE."

It's not funny. It's not funny when someone who continually refuses to demonstrate appropriate seriousness about medical advancement and patient quality of life is busy posting pics of Bernie Sanders riding on a unicorn. Who is making drug development about his political grudges. It's pointless and petty. And it's enough to make anybody truly furious.