The anti-"Star Wars" lunacy seems laughable, but it's related to the toxic male entitlement corroding our politics 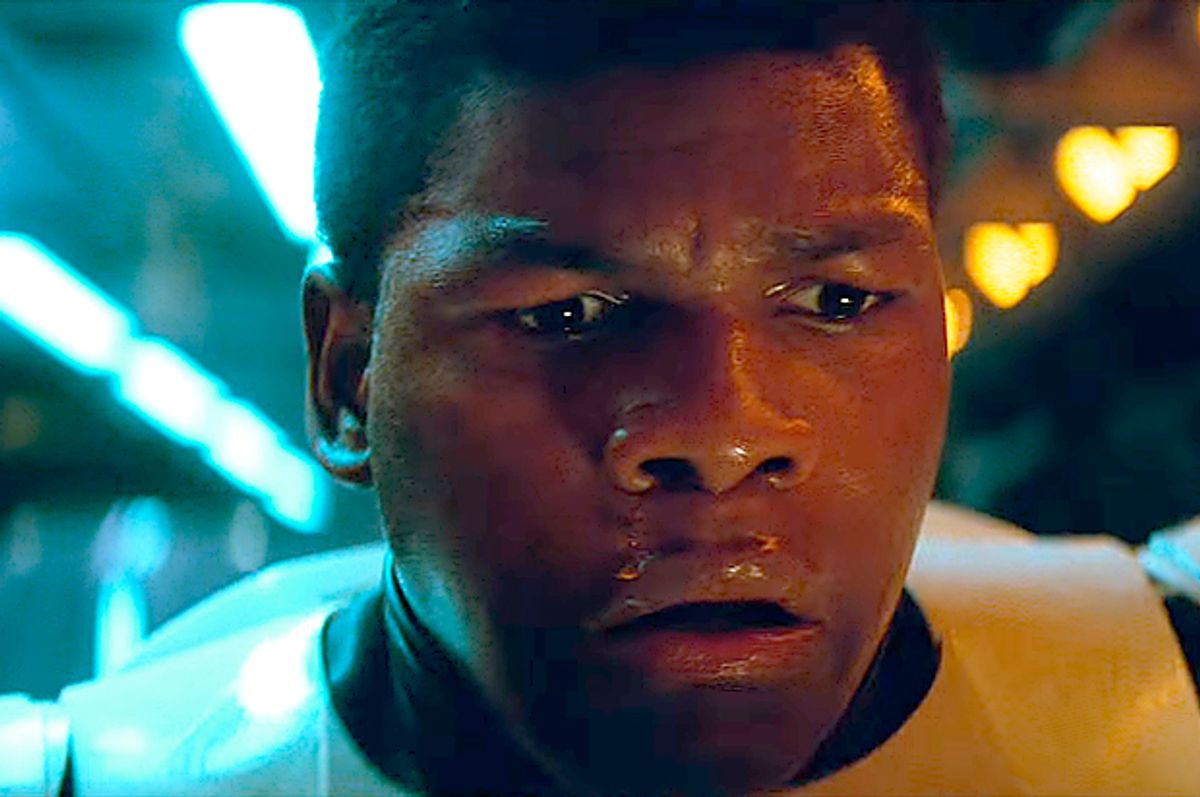 White racists are none too pleased with JJ Abrams’ new "Star Wars" film trilogy. In protest of last evening’s release of the much-anticipated final trailer for this December’s "Star Wars: The Force Awakens," disgruntled members of the White Right began a Twitter hashtag “BoycottStarWarsVII.” It was a pathetic effort at getting attention; the hashtag was subsequently made popular by those who saw fit to mock it.

It is likely that the white supremacists who are upset by the supposed “anti-white propaganda” and themes of “white genocide” in the new Star Wars films will only have their ire further stoked by Monday night’s trailer that opens with an image of a young woman scavenging a crashed Star Destroyer, a voice over by an alien played by African actress Lupita Nyong’o, then proceeds to focus in on a “black” Stormtrooper turned Resistance leader and hero, and then eventually features a “Latino” X-Wing fighter pilot who valiantly fights against The New Order’s (the next iteration of the evil Empire from the earlier films) improved Tie Fighters.

Of course when viewed on the surface, this faux upset by the White Right about “diversity” and lack of “white” “male” “straight” characters in the new "Star Wars" film is laughable.

The previous "Star Wars" films, with one exception, featured an exclusively white cast. The new movie also has an all-white male cast except for John Boyega as the character “Finn,” Daisy Ridley as the presumed main character Rey; and Oscar Isaac, a Latino, as Poe Dameron. With the exception of Carrie Fisher, the remaining human characters as revealed so far are either depicting, or played by white male actors.

The writers, directors, and most of the senior creative staff for "Star Wars: The Force Awakens" are also white men. This is a reflection of Hollywood’s broader demographics where by some estimates are at least 85 percent of the producers, directors, show runners, executives, writers, and other leading creative positions are held by white men.

But when viewed in a broader context, the White Right’s childish and petty protests about "Star Wars" are a reminder of how cultural politics reflect deeper social anxieties, worries, and concerns about power in a given society. And while white American conservatives repeatedly bemoan the “Left’s” supposed “identity politics”—note how the Right only uses that language to defame those causes (for the rights of gays, lesbians, women, and people of color) it disagrees with—in reality white conservatives and their allies deploy “identity politics” most often, and to the greatest effect, of any group in the United States.

The Southern Strategy is a decades-long campaign based on white identity politics that continues to drive the Republican Party; the party itself is the largest white identity organization in the United States.

The Tea Party is the exhalation of an aging white public that yearns for the “good old days," old-fashioned racism, and a Herrenvolk ethic. Donald Trump is a white nativist Know-nothing from the early 20th century turned carnival barker and professional-wrestling wannabe in the Age of Obama.

Jeb Bush yammers about lazy black people stealing the resources of white people. Fox News is a 24/7 right-wing propaganda operation that exists to gin up white racial anxiety, fear, and anger about the "Other" and evil liberals among its almost 93 percent white audience.

The “reverse racism” and “anti-white” complaints about "Star Wars: The Force Awakens," are part of a larger pattern of “white male victimology,” a sentiment that drove the efforts to ruin the 2015 Hugo science fiction awards, fueled “Gamergate,” encourages “Men’s Rights” “activists” and even found umbrage with the most recent "Mad Max" movie because that film’s female lead somehow “emasculated” male viewers.

Science fiction is a space where white men are over-represented in what is problematically termed the “golden age” of American science fiction, and thus quite predictably, also as authors of the genre’s “canonical” texts.

As film scholars such as Adilifu Nama have highlighted, “classic” and “golden age” science fiction (broadened to include space opera and space fantasy) has often “solved” the “race problem” by either writing people of color out of the narrative or transforming them into robots and aliens.

If science fiction has historically represented the White Gaze and Whiteness as the norm, then any efforts to subvert and correct this process of “racial erasure” will be met with anger and upset by those who are invested in it emotionally and/or financially. As a result, including people of color in a space assumed to be exclusive to Whiteness is disruptive to the White Gaze. This is especially true in the alternate realities, outer space, other dimensions, video games and digital media, or a filmic universe that takes place a “long time ago” and in a galaxy “far, far away.”

People of color, women, gays, lesbians, and black people, especially, are an unpleasant reminder of the realities of the world as it actually is, as opposed to the often mythic, fantastic, and ego gratifying ones created by white male privilege and the fantasies of “natural” and “normal” white male dominance.

For those people who exist outside of the spaces where white victimology and toxic (white) masculinity are nurtured and legitimated, complaints that white men are in any way “oppressed” in the world would, quite correctly, be read as absurd. These sentiments are part of a broader right-wing politics of disorientation.

Of course, not all white men are rich. Nor, are they equally advantaged financially, politically, or economically relative to one another. There are many examples of individual people of color and women who are far more successful and powerful than a given white man in American society. But as a group, white men control almost every major social, political, economic, and cultural institution in the United States and West.

In total, white male privilege is an absolute, one with degrees of relative advantage and disadvantage in American society, as compared to other groups, all things being equal.

The complexity comes in how science fiction, video games, online communities, and other spaces often attract (white) men and those others whose masculinity does not conform to the “normal” or “ideal” role offered by those systems of “hegemonic white masculinity.” Unfortunately, many of those men who feel embattled as “betas,” “nerds,” or “losers” idealize toxic (white) masculinity as a norm and ideal, replicating the same types of behavior that actually marginalizes and excludes them.

Cultural politics demand serious attention because they are a privileged insight into a society’s collective subconscious. When a privileged group is forced to experience some measure of equality, however small, they often feel oppressed.

White identity politics and toxic white masculinity-fueled complaints about "Star Wars: The Force Awakens" are not really about a film; they are a reflection of the anxieties felt by the dominant group about losing their real and perceived power to people of color, women, gays, lesbians, and other groups. This power is in no way substantively imperiled; nevertheless the anxieties about losing it are an obsession.

This view of social and political reality is very dangerous. We dismiss it as “just” being about “popular culture” at our own peril.