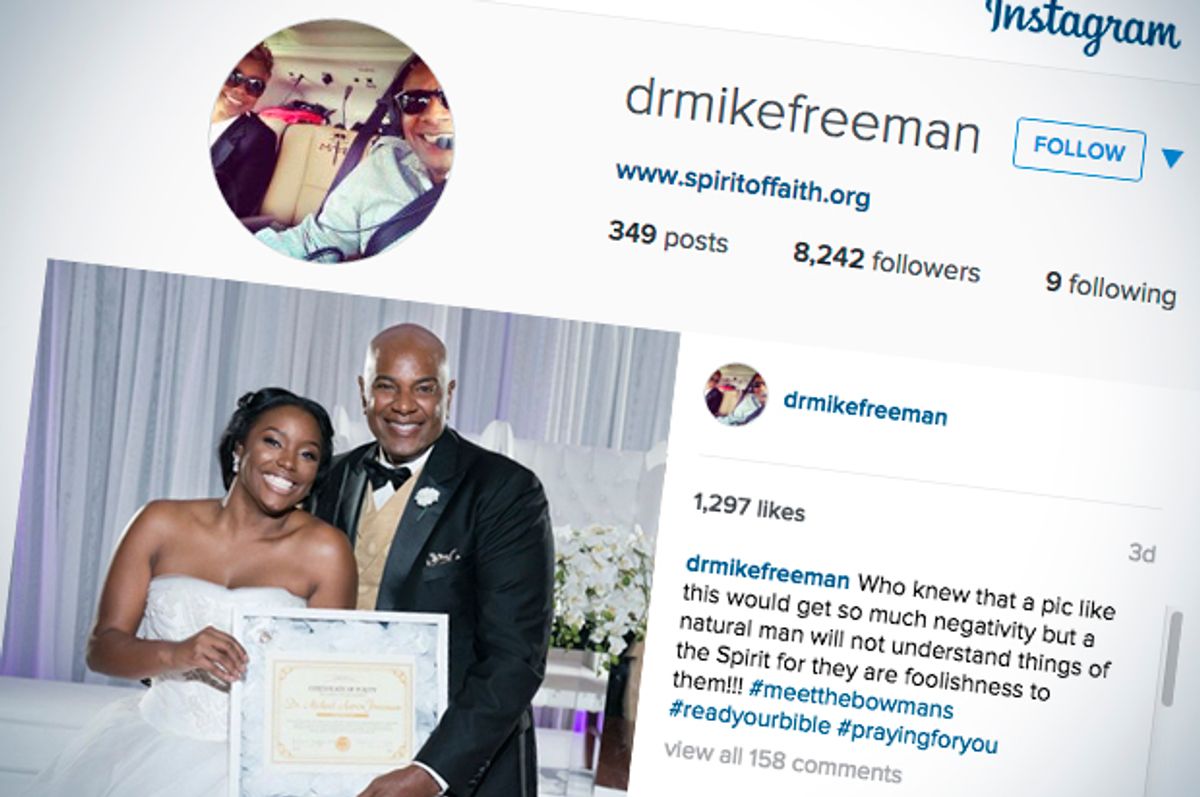 Oh, Internet, take me away to earlier this week, when the commentary around fathers and their daughters' virtue came with some lighthearted humor and no hymen talk.

Brelyn Bowman says that back when she was 13, she signed a "commitment contract," cosigned by her parents, to "abstain from fornication (rubbing and petting) but keep myself until I am united in marriage to the young man that God is preparing for me." And earlier this month, when she married gospel singer Tim Bowman, Jr., that contract ran out. After her Maryland wedding for 3,500 guests, the new Mrs. Bowman posted a photo of her dancing with her dad, Dr. Michael A. Freeman — the Founder and Pastor of Spirit of Faith Christian Center — with the caption, "Another one of my favs! Dancing with my first love! I was able to present a certificate of purity to him signed by my doctor that my hymen was still intact. Also the covenant he gave me when I was 13. When you honor God, your life will automatically honor others! I love you daddy @drmikefreeman."

Freeman also posted a photo of himself with his daughter, smiling and holding their official, doctor signed "certificate of purity." He also added the hashtags "#meetthebowmans #readyourbible #prayingforyou."

The newly married couple, who have a Meet the Bowmans Web site and certainly seem to already believe that they're in their own Christianity-themed reality show, have unsurprisingly received an intense amount of publicity for their hymen-themed announcement, much of it disparaging the "archaic" practice. But Freeman says, "I was totally unaware of what was about to take place. During the remarks, she shared that she wanted to honor me by not allowing any man to touch her before her husband." He adds that all three of his children signed similar pledges, and that while his other daughter gave him a purity certificate at her wedding, his son opted to get out of his contract early. And you will perhaps not be surprised that Bowman apparently did not get up and hand anybody a signed document swearing to his virginity.

I have two young daughters, and I really can't imagine either of them handing them their dad a certificate of intact-ness at any future nuptial event. I don't really get why a girl's purity is something that even on her wedding day is any business of her parents, let alone everyone on Instagram. That's not our family's scene, but you do you, Freemans. And if Mrs. Bowman says she's "So excited to share our story and encourage others to wait!" that's just fine for her. I honestly don't have enough hours in the day to rail against the numerous ways in which the cult of female purity is antiquated at best and profoundly misogynist at worst.

But I think it is worth questioning what the hell kind of doctor says, "Oh sure, I'll get you this certificate of hymen integrity! I keep a stack in my drawer! Just hold up while I just check your vagina. Your dad will be so pleased." Who goes to medical school to issue virginity diplomas?

Conversely, a hymen is not a great indicator of what's actually gone on down there. It's just a tissue, that can be broken in any manner of ways long before a God-approved wedding night. So what happens to young women who've tightly held on to their V cards but lost their hymens? That stuff about horseback riding is real! Are they less pure because they can't flaunt a certificate at their wedding reception? Of course not. So if you're into vows of chastity, knock yourself out. Keep your virginity as long as you want. But please, lose the ignorance of what sex — and the female anatomy — truly are.