Beyond a three-way in 3-D: The awkward delights of "Love," Gaspar Noé's gorgeous real-sex movie

A French bad-boy filmmaker grabs headlines with real sex and a male orgasm comin' atcha. But there's more to "Love" 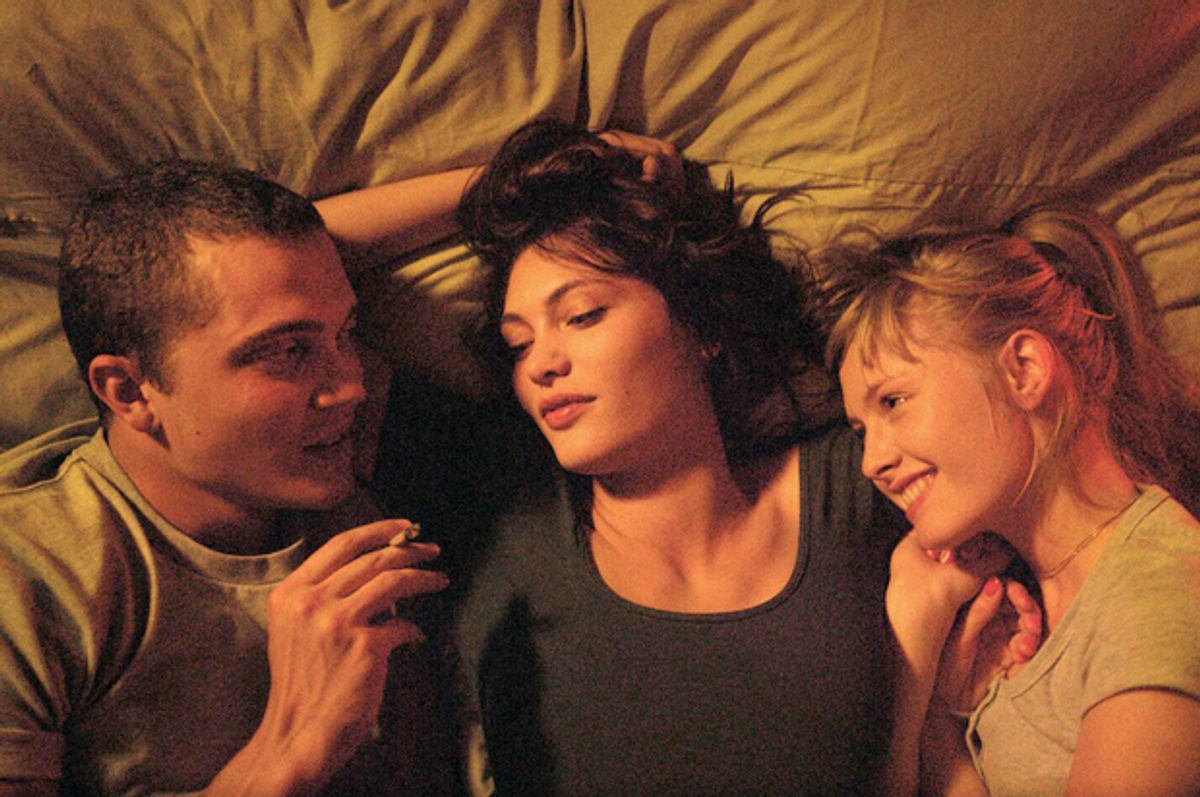 Gaspar Noé is a French filmmaker (although he’s originally from Argentina) who very much belongs to the ambitious, pretentious, self-reflective art-cinema tradition of his country. He also perceives that tradition as a trap, as did Jean-Luc Godard and François Truffaut, two earlier America-obsessed French directors that Noé has carefully avoided emulating, but who are his obvious forebears. He has deliberately pursued controversy and confrontation and extreme storytelling modes in all four of his features, in an effort to tear down the walls of the “art film” ghetto and restore some of the transgressive sizzle that adventurous cinema carried in his youth (and mine, and quite likely yours too).

If you’ve heard of Noé and his films, it’s almost certainly because of these confrontational tactics: He made his big international splash in 2002 with “Irreversible,” a story told backward (in far more disorienting fashion than “Memento”) that featured a brutal rape scene, set in a pedestrian underpass and shot in one nine-minute take. More recently he made “Enter the Void,” which is, among other things, an overt homage to Stanley Kubrick’s “2001: A Space Odyssey” and a hallucinatory journey through the afterlife of a recently deceased Tokyo drug dealer, balanced between the debauched and painful world he has left behind and the unknown infinity ahead.

If you’ve heard anything about Noé’s new film, “Love,” which premiered at Cannes last spring and is now reaching American theaters, you know two things: It was shot in 3-D and it features actors having actual sex, rather than the simulated action that is customary for even the most explicit Euro-sexy films (e.g., “Blue Is the Warmest Color,” whose young female stars were not lesbians and did not have sex with each other).

It would be worse than useless for me to pretend, movie-critic style, that the 3-D three-way in “Love” – or the POV shot of an impressive male orgasm, almost literally in your face -- is somehow secondary or irrelevant to its cinematic quality. The sex scenes in “Love” are the principal reason why I’m writing about it and you’re reading about it, and why a 3-D film by a little-known foreign director will play in every major American city. To be fair, most of the film takes place before and after and in between the hot sexual escapades of Murphy (Karl Glusman), an American film student in Paris, and Electra (Aomi Muyock), his on-again, off-again Parisian girlfriend. But the sex is literally and figuratively the action of “Love.” It is central to the visual craft and identity of the film, to its plot, its central narrative theme, its everything.

Why should you pay money to watch people fucking, if you’ll pardon my French? (Ha! But since we’re on the subject, such dialogue as there is in “Love” is almost entirely in English.) I can’t answer that in the abstract, but Noé and his cinematographer, the endlessly inventive Benoît Debie, have captured some of the most gorgeous sex scenes in film history, largely in a series of fixed-camera overhead shots that allow us to see the protagonists from a slightly detached or semi-divine perspective. Students of Noé’s work will find innumerable references to “Enter the Void” here, and one way of understanding the sex scenes is the possibility that the characters are viewing them from the future, or the afterlife. (Murphy insists at one point that there is nothing after death, but Noé’s metaphysics, we might say, involve an elaborate conception of nothingness.)

Glusman and Muyock are unquestionably beautiful specimens of the human physique (and, ahem, well suited for this activity in various notable respects). But “Love” bears no resemblance to pornography, and not just because it depicts a naked female body with ample pubic hair. I never found it even borderline arousing, or at least not in the “prurient interest” sense. When Murphy tells a girl at a party that he wants to make a sentimental, emotional movie about sex (right before he accompanies her into the bathroom, for some sex of a more perfunctory variety), he is serving as an overly obvious directorial stand-in, not for the first or last time. But it’s a perfect description of the movie he’s in, which possesses a raw, naked, gauche honesty that has always been embedded within Noé’s work but is fully exposed here, sometimes with hazardous results.

Despite all the screwing Murphy and Electra do – sometimes with the erotic, chaotic and ultimately destructive addition of their neighbor, a petite Nordic gamine named Omi (Klara Kristin) – “Love” is by far the least confrontational or overtly challenging of Noé’s four features. This movie is overloaded with film-school gamesmanship: Electra’s older, richer ex-boyfriend is named Noé, and the infant son Murphy doesn’t want is named Gaspar. There are numerous in-joke references to Pasolini’s “Salò” and D.W. Griffith’s “Birth of a Nation” and “Andy Warhol’s Frankenstein,” three controversial and divisive spectacles, the last of which (not actually made by Andy Warhol) was also a 3-D sex movie. But “Love” will surely strike some viewers as not nearly subversive or “progressive” enough, at least in sexual-political terms.

Murphy is an overly possessive alpha-male hothead, who is eager to sleep with Electra and Omi at the same time, but refuses to do it with Electra and another guy. When she hires a trans sex worker, as a “compromise,” Murphy gets so wasted that he doesn’t remember what happens – and Noé doesn’t show us. I think it’s obvious in context, and from the multiple points of similarity between Noé and Murphy, that “Love” is more like an Augustine-style confession – “Here’s how I screwed up my relationship, maybe there’s a lesson there for you” – than a sexual or moral prescription for how to live and whom to love.

But our culture has great difficulty figuring out how to value honesty, in case you hadn’t noticed, and to a certain extent I get it. Gaspar Noé is entitled to his own degree of misogyny and homophobia and sexual narcissism – although transfigured or embodied here as a virile young American, in life Noé is a bald French dude in his 50s – and is at liberty to tell us the truth about it. Whether people actually want to share that experience, along with the peculiar combination of artful, spectacular sexuality and artless, painful emotional exploration in “Love,” is quite another matter.

I might be the guy this movie was made for, pretty much – I’m not far away from Noé in terms of age or artistic temperament or life experience – but I don’t question anyone’s right to find “Love” massively exasperating, and perhaps a step backward after “Irreversible” and “Enter the Void.” It exasperated me too, with its scenes of overly direct, searching and sophomoric dialogue, especially as delivered by Glusman (who was, I’m just saying, perhaps not hired for his acting chops). But the level of risk here – the risk of saying what you really feel, of not being cool -- goes way beyond the expected limits of movies, or the expected limits, period. “Love” is as bewildering and contradictory as its subject, which Electra repeatedly assures Murphy he will never understand. Neither will I, but even with its abundant flaws and its willingness to embarrass itself this strange and extraordinary film never lost me and never let me go; it wrapped me in a dreamlike rapture and then in a sense of profound and nearly universal personal tragedy.

“Love” is now playing at the Angelika Film Center and the Village East Cinema in New York, and opens Nov. 6 at the Aero Theatre in Los Angeles, with a national rollout to follow.