Paging "Dr. Ken": A TV show that should be one small step forward for Asian-Americans feels like two giant steps back

I resent the show's whitewashed portrayal of Asian-Americans, but I'm also starved for more Asian characters on TV 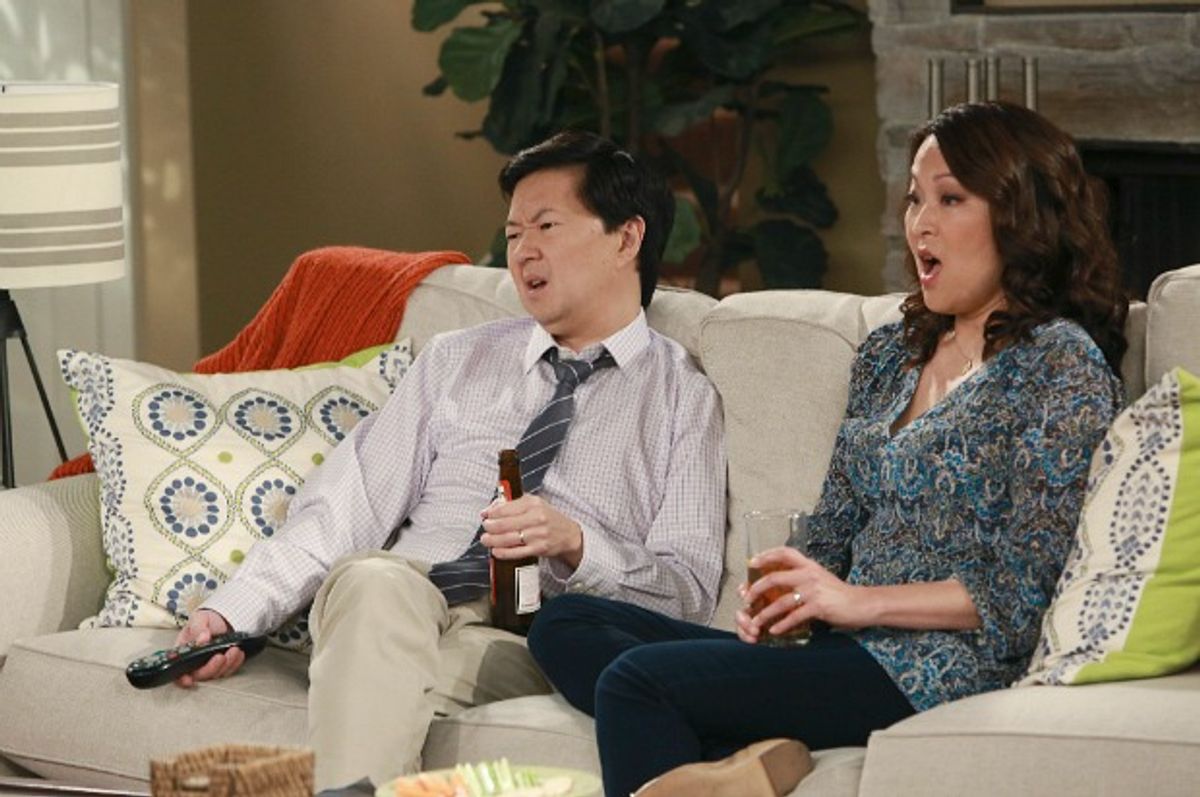 Four episodes in, and despite its popular Friday night ratings, I admit that I'm disappointed to find “Dr. Ken” neither terribly funny/edgy, relevant, or even relatable as an Asian-American viewer. Instead of seizing the rare chance to subvert Asian stereotypes from inside-out, “Dr. Ken” just tends to neutralize them, as if pandering to a white outsider’s gaze for approval.

It's a real shame, because “Dr. Ken,” (after “Fresh Off the Boat,” now in its second season) is the first TV sitcom to portray an Asian-American family in, like, twenty years. The last, of course, was Margaret Cho’s saucily hilarious, game-changing “All-American Girl,” which was unfairly cancelled after one season - despite killer cameos from Quentin Tarantino and Oprah. I also feel frustrated for the multi-talented Ken Jeong, who has impeccable comic timing, and has been unfairly limited by Hollywood to silly, distasteful Orientalist stereotypes, like in “Pineapple Express” and “The Hangover.”

Obviously, one’s ethnicity should not be the sole marker of representation in the media. But for someone who can barely remember any Asian-looking faces on TV growing up, it's annoying that the only current sitcoms sporting all-Asian casts are either model minority “bananas” (yellow on the outside, white on the inside) or “fobs" (unintegrated, but retaining their culture). For Asian-Americans on TV, there's little room to be anything in between.

Not totally unlike “The Cosby Show,” “Dr. Ken” struck me as sanitized of its ethnic flavor: yet another example of a whitewashed, upper middle-class family of color created for a mainstream white audience. Even when Dr. Ken’s traditional Korean parents come to dinner, everyone pointedly uses modern Western cutlery; there's not a single embarrassing chopstick in sight. It's as if Jeong suddenly became polarized from a Fu Manchu type to the other extreme: a conservative establishment figure straight out of the '80s, bearing none other than the preppy, hyper-Anglo name of Kendrick.

The one moment when I see a hint of ethnic heritage in “Dr. Ken” is when Jeong imitates his father's broken English. Otherwise, “Dr. Ken” altogether avoids the natural tensions of family politics, adroitly sidestepping problems of social integration and cultural clashes. It's not just about what is presented on the TV screen, but also what is vitally missing, even from a sitcom: no real dialoging or interiority, raw moments of emotional honesty or inter-generational conflict. The juggling act of Asian-American identity is never broached. At worst, Dr. Ken's son, when bullied at school, is taunted by the toothless nickname “Chompers.”

Unsurprisingly, the show's reactionary tone is accompanied by an unsavory sexist slant. While Dr. Ken remains a peevish, arrogant figure, his perennially good-natured wife/ersatz mama Allison (played by Suzy Nakamura) obviously does all the cooking and is kept busy solving everyone else's problems. Despite the fact that she is a licensed therapist, there are practically no glimpses or references to her own professional life — although there was that moment in the pilot when Ken suggests that she conduct their “session” with her top off and “see where it goes.”

On the Freudian couch, it turns out that Dr. Ken's real source of anxiety is “his baby girl” Molly, who is growing up – what if she doesn't fail her driving test? As an overly possessive pater, he creepily half-jokes: “Kids don't need freedom, they need duct tape,” then mimes binding his legs together tightly. The same day that Molly passes her driving exam, Dr. Ken downloads a DaughterTracker app to spy on her, and eventually hunt her down. An uneasy correlation between potential prostitution and Molly as an Asian female is implied when his colleague Hector quips: “It tracks prostitutes, and every prostitute is someone's daughter.”  For Dr. Ken, driving represents the threat of female sexual freedom. In other words, driving to a friend's house to study will probably make Molly a whore.

As if to maintain parity, every representational step forward for Asian-Americans on TV is usually at the  expense of substantial Asian female roles. In fact, the strongest female role in “Dr. Ken” is also its most minor one: Damona, a typically sassy black nurse, performed nonetheless with refreshing brio by Tisha Campbell-Martin. But even Damona is eventually put in her place by the WASPy, smug hospital boss Pat (Dave Foley), who likes to reminds her that she is a minority before smoothly bribing her silence with two free vacation days. Although Pat is all-too-clearly meant to be the bad guy, it sends mixed signals when Dr. Ken clearly resents Pat's white privilege and sense of entitlement in one scene and then hypocritically strives to emulate him in another. The show's third episode opens with the two men planning a yacht date and congratulating each other on the pristine state of their suede jackets thanks to their access to valet parking, while the lower staff members remain miserably rain-soaked.

Despite the fact that Asians are the fastest growing ethnic group in the U.S., a recent diversity study by GLAAD revealed that only 4 percent of all main characters were Asian of the 2013-2014 broadcast TV season. That's even lower than the previous year, when Asian actors made up 6 percent of main character roles. So at the end of the day, is it better to be misrepresented or underrepresented on the small screen?

Thankfully, there's been substantial recent progress for black and female representation on TV, but Asian-Americans still remain the odd men out. (Forget about Hollywood. Even Aaron Sorkin stated in his Sony-leaked email: "There aren't any Asian movie stars.") They are either trivialized, like the thickly-accented, nonassertive Chang in “Orange is the New Black,” or totally fetishized. When not racebent, like Lucy Liu as "Elementary"'s Joan Watson, Asians are depicted as the perpetual foreigners who cannot assimilate, as strangers in a strange land. Perhaps if there existed more of a variety of Asian-casted TV series in the first place, the literal few that are around wouldn't have to bear the burden of representation; scrutinized for every role and line.

But in the meantime, for Asian-Americans viewers who consider “Dr. Ken” a valid reflection of the times, it might just confirm their deepest integrationist fears: that despite the factual browning of America, the “real" America is still, by and large, of and for whites. If that's true, then obviously the only way for Asians to become “real Americans” is to be seen as honorary whites — or to at least “pass” as accentless and affluent. For now, "Dr. Ken" reads more like a warning tale than a farce: better to not rock the boat at all, than be left behind.