Jeb! Agonistes: Being the sad and gruesome history of a frontrunner who never was and the GOP's zombie apocalypse

Shed no tears for the Bush dynasty, who reap what they have sown. But the undead, crazy GOP isn't finished yet 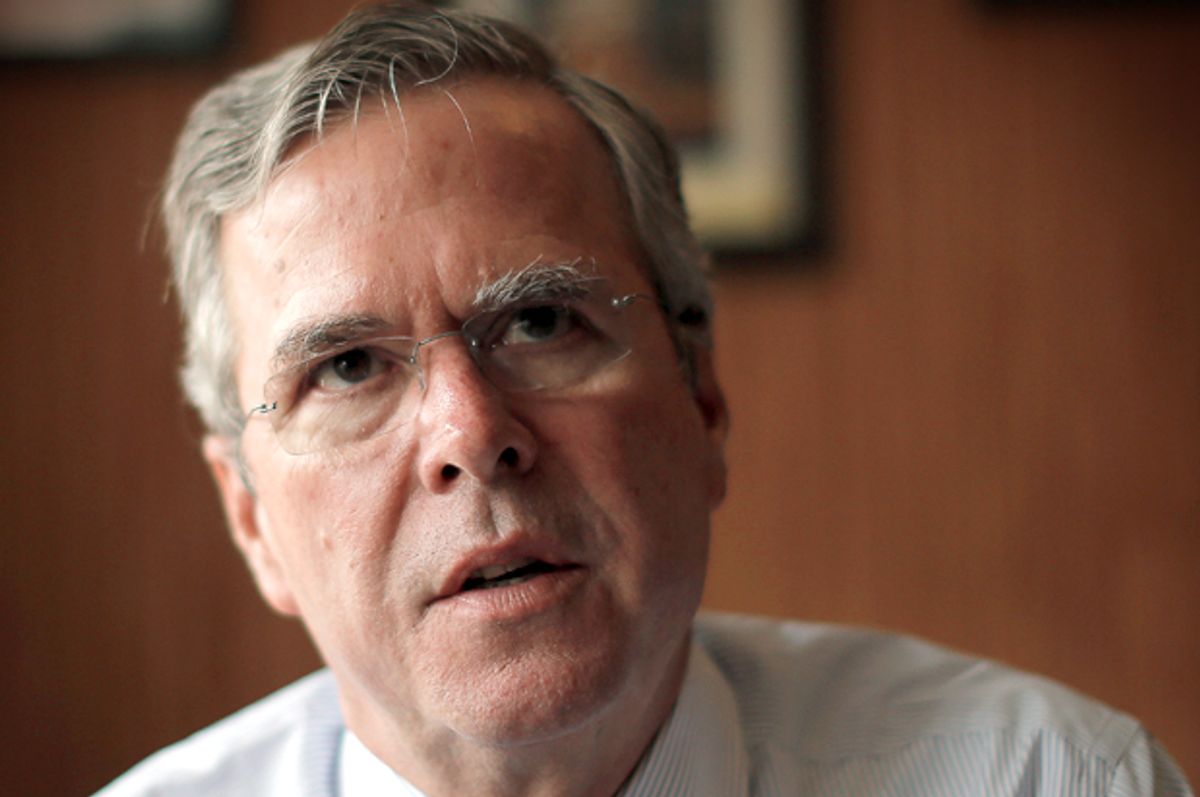 Watching Jeb Bush beached amid the flotsam and offal of this week’s gruesome Republican debate on CNBC, looking less like a deer in the headlights than like some rubbery deep-sea creature out of its element, severely decompressed and struggling to breathe, I almost had an emotion. I’m not claiming that the GOP frontrunner who never was merits our pity or compassion, and I don’t want to default to clichéd utterances about how Jeb! seems like a decent guy despite his disagreeable positions and sinister backers. He doesn’t, actually. Bush’s record as a capable administrator within the crocodile-infested swamp of Florida politics has been greatly exaggerated. If he were such a good guy, maybe he’d have walked away from his family dynasty and the political party it has perverted and done something useful with his life.

Still, there was something interesting going on during and after Wednesday evening’s dreadful spectacle, something beyond the apparent end of the Bush family’s quest for a third president and the anointment of Marco Rubio, Jeb’s Sunshine State nemesis, as the new favorite of the Republican establishment. (That’s conventional wisdom, not a prediction of any sort. I have no clue what will actually happen in the Monster Raving Loony Party’s primaries, and neither does anyone else.) Let’s call it pathos. We don’t have to like Jeb Bush, or agree with anything he has ever said or anything he will ever do, to see him as a doomed literary character blinded by pride and arrogance, abruptly forced to recognize (too late!) that the fate written in the stars for him is not the one he expected.

Bush has been compared to Charlie Brown, after the second or third time Lucy offered him that football, and to Richie Rich the Poor Little Rich Boy, and in both cases the resemblance is striking. On a more elevated level, since Republicans claim to know the Bible so well (except for that one guy who’s been too busy playing the role of Moneychanger in the Temple), Bush suggests the enfeebled and self-pitying Samson, at least as depicted in John Milton’s “Samson Agonistes,” after he’s had his hair cut off and his eyes gouged out. His God-given strength has turned out to be an illusion, and the supposedly indomitable warrior finds himself “Blind among enemies, O worse than chains.” Milton’s chorus intones, “Thou art become (O worst imprisonment!)/ The Dungeon of thy self,” subjected “to th’unjust tribunals, under change of times,/ And condemnation of the ungrateful multitude.”

Changing times and ungrateful multitudes are precisely Jeb’s problem. As Frank Rich observed earlier this week in New York magazine, the would-be strongman of the GOP field apparently hadn’t noticed until now that this isn’t his father’s Republican Party anymore. Enormous piles of money and the promise of “electability” – just enough primary-season red meat for the right-wing zealots, just enough so-called moderation to compete with Hillary Clinton in the swing states – were supposed to quiet the grumbling and smooth the path to victory, as they had for Mitt Romney and John McCain, not to mention Jeb’s supposedly dumber and less adroit big brother.

But Romney and McCain never came close to being elected president, despite all the vigorous election-season “unskewing” from Republican spin doctors, and the most active and devoted loyalists of the GOP base hated their guts all along. Jeb Bush entered the 2016 campaign as the living embodiment of a compromise that has made the angriest white men of the Angry White Men’s Party increasingly bilious: Swallow the smoothed-out candidate sold to them by the fat cats in New York and Washington as the only Republican who can win, and then lose anyway. If only, some of those guys are still telling themselves, we had gone with Rick Santorum last time. (Who is actually still running or has recently quit, but in either case no one noticed.) Or with Pat Buchanan, back in whatever-the-hell year that was! We might just about have saved America by now. I'm sure some of them are still chewing bitterly on the fact that Phil Gramm never got the nomination.

Those are terrifying delusions, but the point is that exactly nobody believes that Jeb Bush will save America. Including him, I would venture. Donald Trump’s jibes about Bush’s “low-energy” campaign have hit home, in a way they haven’t quite with Ben Carson, because it’s so obvious the poor bastard’s heart isn’t in it. At least George W. Bush rebelled against his dad by getting high and going AWOL and playing the role of Texas hell-raiser; the best Jeb can manage is a sad-sack symbolic rebellion in which he blows a kazillion dollars challenging Rick Perry and Fred Thompson for the title of Worst Republican Candidate Ever.

I would love to believe that there’s something not just pathetic but noble about Jeb’s self-immolation, and that he’s either deliberately or unconsciously choosing to stage the Bush family’s Götterdämmerung on a grand scale. But he’s probably just a clueless, entitled dweeb who got sandbagged by history. As Rich notes, much of that history is recent, and stems from the four presidential campaigns waged by his father and his brother, in which Lee Atwater and Karl Rove (respectively) sought out and galvanized the most retrograde, most atavistic and most paranoid tendencies in the Republican voter base. But the GOP overlords could only control or channel the zombie virus they had unleashed for so long, and at some point – we could argue about when exactly this happened – it invaded the Republican brain and took control of the organism.

What Jeb has failed to grasp, in his Samson-like blindness and self-imprisonment, is that today’s Republican Party bears almost no relationship to the reasonably coherent center-right pro-business party of Nixon and Eisenhower (and, for crying out loud, of Jacob Javits and Edward Brooke). Sometimes it strikes the old poses and murmurs the old catchphrases, but whenever it opens its mouth to speak, all you can hear is a horrible insect buzz. Seen in those terms, Jeb’s apparent downfall -- along with those of John Boehner and Kevin McCarthy and the near-implosion of the Republican congressional caucus -- is a classic case of reaping as you have sown. But to understand the GOP’s internal contradictions, and the dangers posed by its rotting, shambling undead carcass, I suspect we need to reach even further back.

All the crazy stuff found in the 21st-century Republican Party – the racism and the anti-immigrant fervor and the hyper-patriotism and the mistrust of big cities and big government and the perverse idolatry of capitalism among the white working class – goes way back in American history. None of that started with the Reagan Revolution or the emergence of the New Right in 1964 or Joe McCarthy. But the evil, self-destructive zombie magic genius of the new GOP lies in the fact that those things had never been combined before.

As historian James McPherson describes the pre-Civil War political climate in his magisterial “Battle Cry of Freedom,” all those ingredients were present. The Whigs, who were soon to split over slavery and give birth to Abraham Lincoln’s Republican Party, were the party of bankers and capitalists – but also the party of a strong central government and massive public investments in railroads, canals, highways and public education, which they saw as the engine of social and economic progress. They opposed the spread of slavery and, at least in theory, supported civil and political rights for free African-Americans. On a less savory level, the Whigs also had pronounced overtones of white Protestant nativism and anti-Catholic bigotry, as McPherson puts it, and reflected elite concerns that the newcomers flooding into America’s cities would change the nation’s fundamental Anglo-Saxon character.

On the other side stood the Democratic Party molded by Andrew Jackson, which embraced the new arrivals from Catholic Europe and championed the cause of industrial workers and small farmers against the “bloodsuckers” and “parasites” of monopoly capitalism and the New York banks. Democrats stood with the “outsiders” who had been left behind by the Industrial Revolution, and angrily denounced the worsening economic inequality that left the top 5 percent of the white male population holding 53 percent of the wealth in 1860, while the bottom half held just 1 percent. (I know, right? The whole situation is like a Philip K. Dick novel, uncannily familiar yet totally off.) In most material respects, those Democrats were much further left than today's attenuated, conflict-averse, Wall Street-friendly party. Yet as McPherson acridly observes, the Democrats’ “professed egalitarianism was for whites only”; they were viciously and overtly racist in the North, and vigorously supported slavery in the South.

Ultimately the conflict between the Whig-Republican and Democratic worldviews of the mid-19th century led to the bloodiest and most dramatic war in American history. Whether that war actually resolved that conflict – and whether, in a certain sense, it ever ended – is open to debate. Chattel slavery is no more, but its legacy lingers on and the underlying cultural and political questions that divided the nation 150 years ago still plague us today. Our problem now is that the Republican Party has managed to position itself on both sides of that ideological divide, as impossible as that sounds, while the Democrats do not clearly represent either.

Jeb Bush, as I said earlier, got sandbagged by history. He thought he was running for president in the boring, hawkish, sanctimonious and innately cautious Republican Party of his parents and grandparents, the one favored by generations of bank vice presidents and hardware-store proprietors and Presbyterian ministers. Or, more likely, he pretended to think that, and believed that his plutocrat backers could stuff the empty carapace of that party with enough money to make it look somewhat convincing. Jeb’s pathetic fallacy lies in refusing to see or admit or confront the true consequences of the change that has been a long time coming, a change that his caste and his family did much to create.

Perhaps it has dawned on our rather dim pathetic hero, after his CNBC Waterloo, that the old Republican Party has been entirely devoured from within and replaced by a hybridized Dr. Mengele concoction that combines the worst populist currents of both the bygone Whigs and the Jacksonian Democrats. It loves big banks and big corporations, but yearns to demolish the central government and defund the public schools. It is nativist and racist, with equal fervor. It claims to represent those left behind by economic change and the downwardly mobile working class, but only if they happen to be English-speaking whites who agree that their problems stem not from unfettered corporate greed and oligarchic rule but from the deranged priorities of big government and the depraved conduct of other poor people.

One might suggest – as even a number of non-insane Republicans have suggested -- that a party so enthusiastically committed to all the most hateful and destructive tendencies in American politics, even when they overtly contradict each other, is a nonsensical and incoherent enterprise that’s doomed to fail. To which I say: Sure, I guess. This is America, folks: Incoherent nonsense is the specialty of the house. All politics are driven more by passion than by reason, and ours more than most. Liberals have been confidently forecasting Republican doomsday for decades now, while the reanimated GOP, stuffed with Kochian cash, has built an impregnable congressional majority, paralyzed the legislative process and pushed the national policy agenda ever further to the right. To the zombie party, impending doom is a great victory, and the political corpse of the last Bush is its greatest trophy.