Chris Christie plays a desperate, shameful race card and will still never, ever be president

Christie is falling behind, so he's fear-mongering on crime. It won't help him, but it will hurt the country 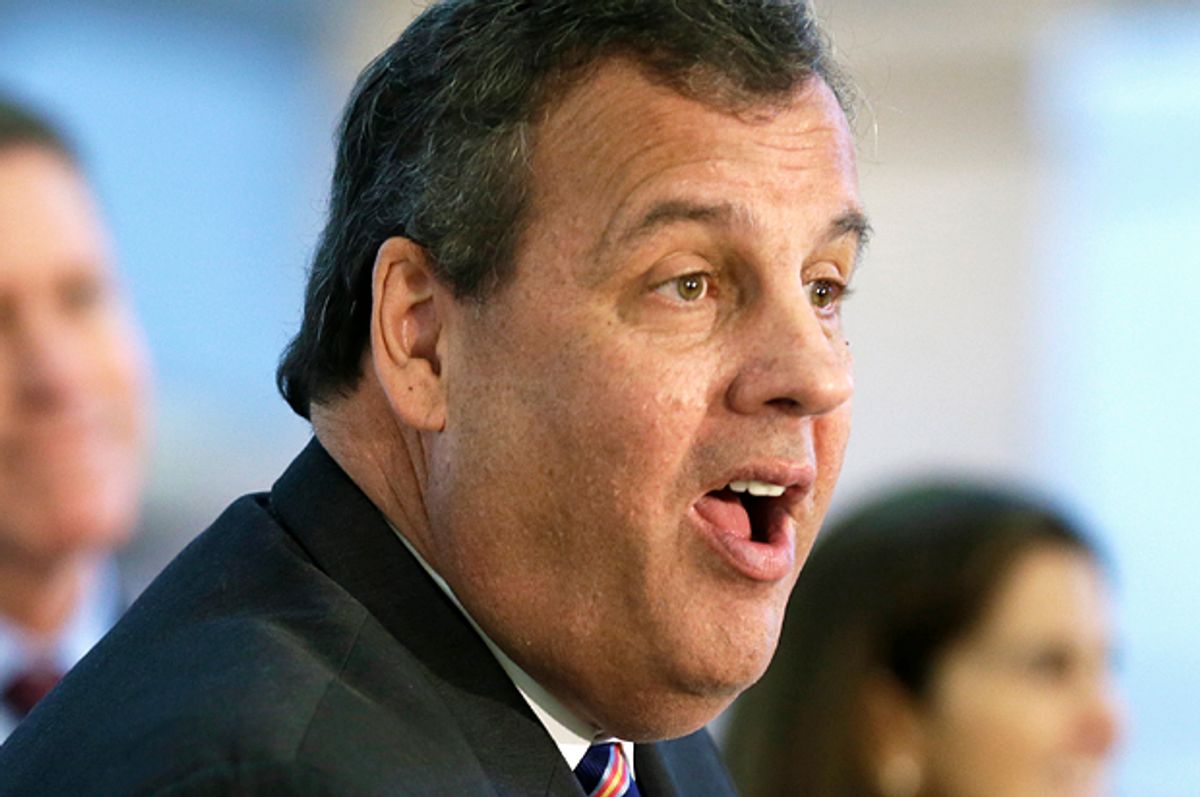 Chris Christie is languishing in the Republican presidential primary polls---even John Kasich is beating him in the latest polling data---so it's not surprising that he's throwing his Hail Mary pass. But boy, is it a distasteful one. Christie is now trying to win Republican voters over with the old Richard Nixon playbook of playing on white, suburban fears of "urban" crime.

Barack Obama has been making moves to address the problem of over-incarceration and police violence in our society, by releasing non-violent drug offenders and pushing employers to be more open-minded about hiring people who have done time. He made this speech in New Jersey, and so naturally, Christie just had to respond. As Talking Points Memo reports, he's not being very subtle about it:

Christie used the president’s visit as an excuse to travel to Camden, a city where the county government’s sheriff’s department took over policing three years ago. There, he did something he has ridiculed in the past: he signed an executive order declaring a day of appreciation for a particular constituency. Because of Christie’s actions, Thursday November 5 will now be Law Enforcement Appreciation Day in the Garden State.

Why did the governor’s office on Friday hastily schedule a Monday event to announce a ceremonial action?

Counter-programming of course. Christie took the opportunity to press what is in many ways a lock-em-up, tough-on-crime agenda just as politicians across the ideological spectrum are deciding that mass incarceration has gone too far.

Why Christie is doing this isn't a big surprise. Huge chunks of the Republican base live in constant fear of crime and mindlessly applaud police violence, the excesses of the war on drugs, and over-incarceration as a response to that fear. This fear has no real attachment to actual risk of being a victim of crime, but continues to be what it was when Richard Nixon's Southern strategy to capture the white vote banked heavily on the phrase "law and order": A socially acceptable way for racist white people to express fear that people of color are out to get them.

The ridiculousness of Christie's gambit was exposed back in September, when Christie went on Morning Joe to claim that he would reinstate "stop and frisk" in New York and that the current mayor, Bill de Blasio, is somehow turning the city into a danger zone by not continuing the policy. "It’s the liberal policies in this city that have led to the lawless that’s been encouraged by the president of the United States,"  he warned.

The problem is that the city Christie believes is devolving into a dystopic nightmare actually had one of the safest summers in years. But Christie pooh-poohed that, because conservative fear-mongering on crime isn't really about crime, but just about perpetuating fears of big cities, racial diversity, and liberalism generally.

The detachment from reality has only grown more bizarre, as Christie went on Face the Nation last Sunday, once again saying that, "There's lawlessness in this country. The president encourages this lawlessness. He encourages it." Then there was this bizarre and unsettling exchange between Christie and host John Dickerson:

DICKERSON: Encourages it how?

DICKERSON: But Black Lives Matter shouldn't be justified at all?

CHRISTIE: Listen, I don't believe that that movement should be justified when they're calling for the murder of police officers, no.

DICKERSON: But they're not calling for the murder of police officers.

Obviously, we're in the email forward, conspiracy theory-mongering zone so beloved by the right. But Christie has his floundering poll numbers to consider, so pushing every unhinged right wing paranoid meme is what he's going with.

While it seemed for a time that the fear-mongering about crime was in decline on the right, in the past few months, it's been coming back to life, which is why Christie is pouncing. A couple of things have been going on to bring it back, starting with the surge of liberal criticism of over-incarceration and the Black Lives Matter movement. There's been a lot of media attention to stories about unarmed black civilians dying at the hands of aggressive cops and other racially loaded violence, particularly against teenagers who haven't really done anything to merit being physically abused by police.

These stories, and the protests that have emerged in response, are creating a defensive reaction in conservatives that support these abusive, racist practices, due to their inchoate fears of crime. There's no police violence against black people that conservative media figures won't excuse. Christie's comments about Black Lives Matter, in fact, stem from a growing narrative on the right that is trying to paint the movement as somehow pro-violence, when obviously their purpose is to stop violence and pointless death at the hands of police.

In addition to all this, you have the issue of gun control. In response to a seemingly endless stream of mass shooting, liberals have been increasing pressure to enact some kind of gun safety regulation. But of course, conservatives need to blame anything but easy access to guns for gun violence. So instead, they raise fears about "lawlessness"---fears that just so happen to justify conservatives who want to buy more guns to protect themselves against this supposed tide of violence.

All this fear-mongering probably won't help Christie's poll numbers---really, coming out for Social Security "reform" will never ingratiate you with the elderly white people that make up the backbone of the Republican Party, making his a lost cause---but that doesn't mean that his behavior isn't a big deal. Stoking baseless, racially loaded fear of crime will likely have ramifications that extend past this election cycle. Putting the face of a ostensibly mainstream figure like Christie on the racist fears that Black Lives Matter activists are out to get you will help justify those fears. It's beyond irresponsible of him to pander like this to gain some points in a race he's never going to win. For shame, Christie.