"Trumbo" and the long, dark shadow of the blacklist: How a Hollywood gossip columnist launched the culture wars 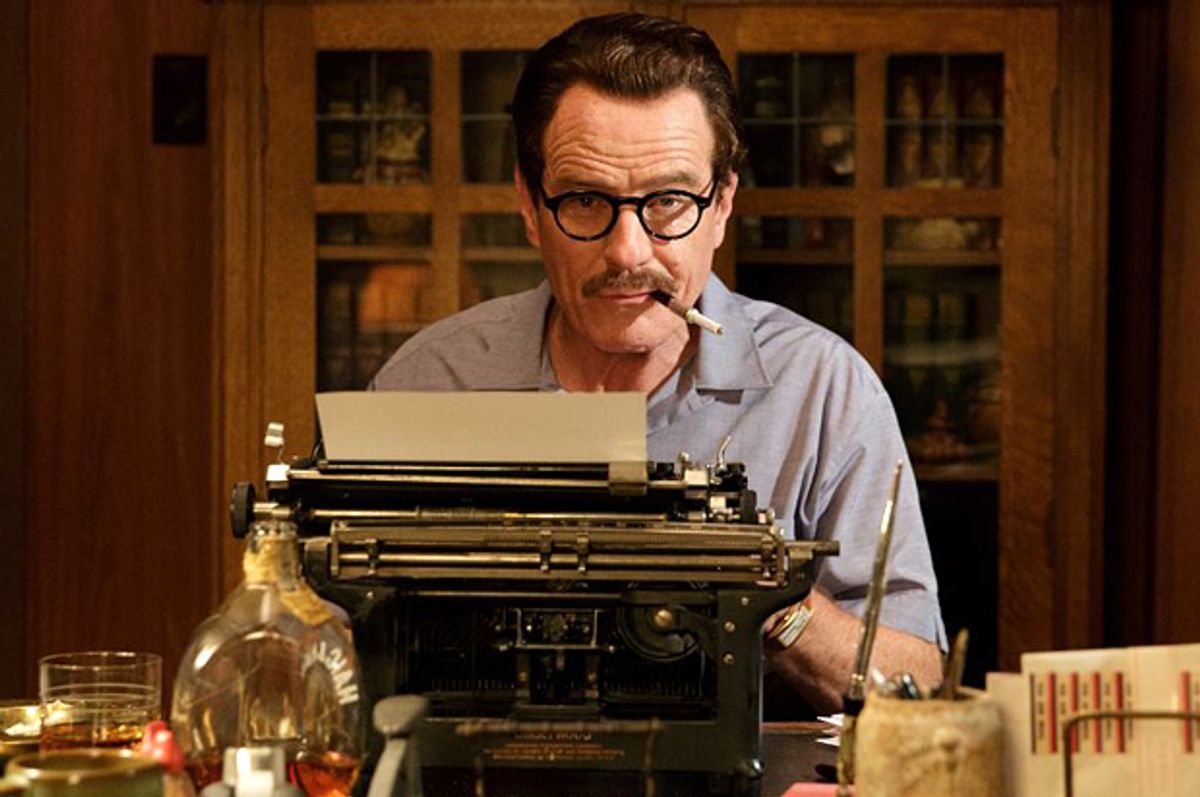 I suspect the most important and most resonant character in Jay Roach’s film “Trumbo” is not Dalton Trumbo, the blacklisted Hollywood screenwriter played by Bryan Cranston, who won two Oscars for scripts he wrote under fictitious names. Instead, it’s the legendarily vicious Hollywood gossip columnist Hedda Hopper, played by Helen Mirren (probably the first American role where Mirren has felt wholly convincing). Once an aspiring actress who had washed out well short of stardom, Hopper channeled her bitterness, and her insider’s understanding of how power worked in Hollywood, into a position of extraordinary power that has no contemporary parallel.

It was Hopper, more than self-appointed Hollywood patriots like John Wayne or Ronald Reagan and far more than any Washington politician, who drove the creation of the blacklist, an informal but inflexible policy under which actual or suspected Communists or “fellow travelers” were barred from working in the movie industry. There has never been a time, going back to the ancient Greeks, when culture was not an instrument of politics (or politics, to put it the other way around, a subset of culture). But in mid-20th-century America, the movie industry proudly presented itself as a business that provided wholesome entertainment for all but had no political agenda, overt or otherwise. Hopper was intelligent enough to see through this ideological fiction, and she strikes me as a central figure in the prehistory of the Internet and the contemporary culture wars. She was a blogger half a century before blogs; she was TMZ, Matt Drudge and Ann Coulter all rolled into one, a hatchet-wielding hitwoman with a ladylike hat and a chatty demeanor.

I’m not trying to write a straightforward movie review of “Trumbo,” which I would describe as a clean and agreeable biopic that restores some vitality to a fascinating episode in 20th-century cultural and political history. I cannot pretend to any objectivity when it comes to this subject, which was equally true from the opposite direction in the case of Clint Eastwood’s execrable “J. Edgar.” My mother and her first husband (who many years later was also her third husband) were both members of the Communist Party. My stepdad knew Dalton Trumbo, and worked on the defense committees for both the Hollywood 10 (a group of movie people, including Trumbo, who went to federal prison for refusing to answer questions before Congress) and for Julius and Ethel Rosenberg, American Communists who were executed as Soviet spies. Given that the blacklist was directly responsible for the breakup of their marriage (after which my mother married my father), one could argue that if it weren’t for Hedda Hopper, I wouldn’t be here.

There’s a scene in “Trumbo,” presumably fictionalized by screenwriter John McNamara but entirely plausible, in which Hopper makes clear to MGM head Louis B. Mayer (Richard Portnow) that she can and will force him to fire all the suspected Reds at his studio, and instruct the other Hollywood bosses to follow his lead. Does the moviegoing public need to be reminded, she wonders aloud, that Mayer is really Lazar Meir, born in Minsk? That Samuel Goldwyn was born in Warsaw as Szmuel Gelbfisz? That the Warner Brothers were really the Wonsal or Wonskolaser brothers, from a shtetl in eastern Poland? Amid the surging nationalism and anti-Communist fervor that followed World War II, how were red-blooded Americans likely to view the dubious loyalties of “an industry run by kikes,” virtually all of them from countries now under Soviet influence?

Maybe that scene thumps the viewer over the head a little with the enduring themes of American fearmongering and intolerance, from Cotton Mather and Salem Village straight on through to the Fox News commentators who will insist, right now, that all Muslims are united in a billion-strong campaign to destroy democracy and Black Lives Matter protesters are calling for the slaughter of cops. But Mirren plays Hopper’s unctuous self-righteousness beautifully, and those connections are in fact what make the much-mythologized Hollywood blacklist a signal event.

Dalton Trumbo was without question a hero in the ongoing struggle for First Amendment liberties, as well as one of the finest craftsmen in the Hollywood dramatic tradition. (And also, as Cranston plays him here, an arrogant and self-absorbed person prepared to bulldoze others for his political and career purposes.) With socialism back on the outer margins of the American political menu, the organizational zeal and left-wing idealism of Trumbo and his comrades may not seem quite as remote as it once did. (The Communist brand, I would say, has been irreparably damaged.) But the material effects of the Hollywood blacklist were undeniably minor, and limited to people like Trumbo – a few hundred relatively privileged cultural workers who were marginalized and persecuted for their beliefs, or just for their associations.

Where the truly insidious and enduring legacy of the blacklist is to be found is not in the stories of a few writers and directors driven into penury and exile, but in its immense and pervasive chilling effect on American cinema in particular and freedom of expression in general. The studio heads’ 1947 agreement to bar all members of a constitutionally protected political party from employment – based on little more than innuendo -- preceded both the House Un-American Activities Committee and Joe McCarthy’s hunt for Red spies in the government, and lent considerable momentum to those crusades.

Old friends testified against each other, and those in Hollywood who named names to the Red-hunters to keep their job, exemplified in the film by Edward G. Robinson (Michael Stuhlbarg), suffered in a different way. Elia Kazan and Budd Schulberg remain controversial figures to this day; actor Sterling Hayden bitterly described himself as “a rat, a stoolie.” Thoroughly spooked by Hopper’s threats, the studios spent years purging all scripts of anything that resembled an undesirable opinion, and purging their talent rosters of any contaminated personalities. If you had once had a drink with someone who had once signed a petition, your phone was liable to stop ringing without explanation. You might not be on the blacklist, but you weren’t exactly off it either.

We heard echoes of the blacklist after 9/11, in Cheney-esque admonitions to be careful what opinions we expressed, lest an ill-advised Op-Ed or some tenured radical’s lecture on imperialism weaken our resolve to fight the Enemy (who is permanent, and to be found everywhere). We hear them in the right-wing media’s “guilty until proven innocent” attitude toward American Muslims, who are assumed to be terrorists or crypto-terrorists even if they’re scooping ice cream at the mall (or building homemade clocks). We hear them from school-board zealots who want to return to “patriotic” history textbooks, rather than those that adhere to the irritating standards of professional historians. We hear them in the enduring memes of the “liberal media” and “liberal Hollywood,” sinister forces perversely devoted to destroying America – when in fact the mainstream movie industry has been notably sluggish and cautious in terms of addressing social change and major political issues.

Nothing about the blacklist was especially new, in terms of American history or Western civilization. Hedda Hopper and her followers did not invent the widespread suspicion that the creative class is inherently treasonous, or the deep currents of xenophobia and anti-Semitism, or the paranoid dark side of American exceptionalism, in which the nation’s character is seen as under constant attack from unseen forces. While the Hollywood blacklist finally collapsed in 1960, when Trumbo was given screen credit as the writer of both Stanley Kubrick’s “Spartacus” and Otto Preminger’s “Exodus,” the American right learned a lesson it has never forgotten: If inoculated with the right doses of fear, a large proportion of the population is delighted to throw away the essential liberties of which Jefferson and Lincoln were so proud in the name of saving “America,” whatever that’s supposed to be with those qualities subtracted. And so we have the nation remade by the Patriot Act and the NSA and the drone war, which are not so much the descendants of the blacklist as its mutant cousins, many times removed.

In 1951, an obscure character actor named Lionel Stander found himself suddenly unemployable after another actor was asked about him during HUAC testimony. (The other actor said he knew nothing about Stander’s political opinions.) Stander himself was called to testify and announced that he knew about “a group of fanatics who are desperately trying to undermine the Constitution of the United States,” and he was prepared to name names and cite details. This group consisted, Stander said, “of ex-Fascists and America-Firsters and anti-Semites, people who hate everybody including Negroes, minority groups and most likely themselves.” These subversives were “engaged in a conspiracy outside all the legal processes to undermine the very fundamental American concepts upon which our entire system of democracy exists.”

That was one of the sweetest burns inflicted by any of the HUAC witnesses, and Stander paid the price for it. He didn’t work as an actor for 10 years after that, although decades later he was cast in a couple of Steven Spielberg movies. If your TV memory goes back far enough, you may remember him as Max, the gravel-voiced butler on the cheesy early-‘80s detective series “Hart to Hart.” Yes – that’s that guy! You almost have to hope that when Stander died in 1994 he didn’t realize how much further that dark anti-American conspiracy had come.