We've reached peak male fragility: A writer sends a box of horse crap to "my cheating husband" and random men tell her she should kill herself 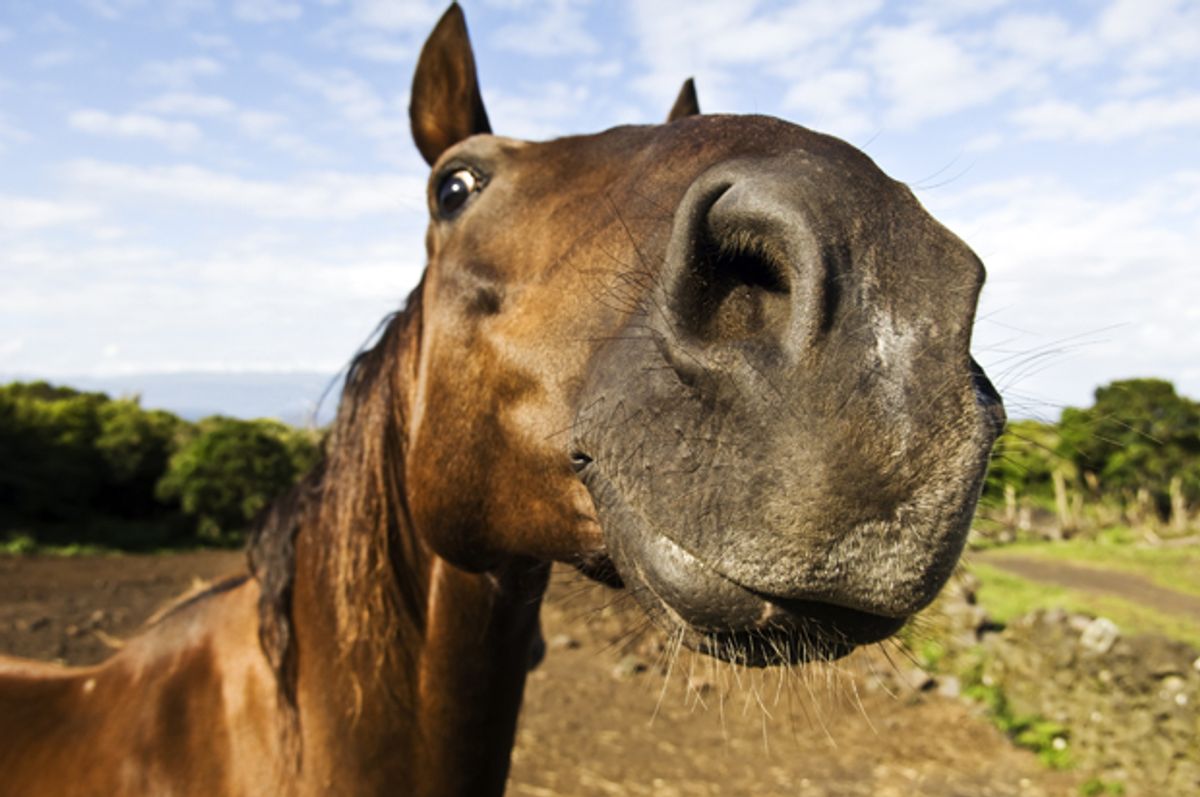 Shocking the internet is not easy to do; earlier this year, a woman who found a ball of cat hair in her vagina managed to transfix those of us who love hearing that someone else’s life is more ridiculous than theirs. This week, freelance writer Amanda Chatel has managed to make jaws drop with her YourTango essay entitled, “I Sent My Cheating Husband An ACTUAL Pile Of Horse SHIT In The Mail.” No, said “horse shit” is not a metaphor, but actual horse shit, mailed via a company called Shitexpress.

Why’d she do it? She says she found out her estranged husband had been in a relationship with a woman 28 years his junior while they were still together, who he called his “soulmate.” When the woman sent Chatel a poem casting herself as the “little girl” in love with Chatel’s husband — Chatel says the poem contained details about her that only her ex could have revealed — she decided she wanted to do something drastic. She considered mailing her own excrement to her ex, but since “such a thing probably wouldn't make it through customs,” she hired professionals. As of today, she hasn’t received confirmation about whether her Shitexpress missive has been received.

Chatel has already chronicled her decision to get divorced, so this latest piece is an extension of an ongoing public confessional, but one that has gotten international attention. I emailed her to find out how things reached the point where she turned to such a smelly solution to her problems, what the fallout has been, her advice is for the next woman (or man) scorned who wants to show their ex just how angry they are and why she’d make the same choice again.

This interview has been lightly edited for length.

How long did it take for you to go from having the idea of sending the shit to actually doing it? Did you tell anyone you were planning to do it?

It was all so quick and sort of blurry in my memory, as fits of rage usually are. I’d say my thought process originated with wanting to send him something—anything—but because I had on the brain what a piece of shit he was, I Googled if sending shit was possible. Bizarrely, it was. The only person I told in that moment was my mom because I was visiting her at the time. She looked at me, rolled her eyes, and said, “Oh, that’s lovely, Amanda.”

Was there a part of you that wanted this to be the final straw in terms of severing any ties to him by doing something so dramatic?

Yes. I realize we still have to get legally divorced in both countries, but I can’t think about that right now. I wanted this to be the equivalent smack in the face of what he’d done to me. Although, to be honest, I do send him random Dorothy Parker and Frank O’Hara quotes, as a means of haunting him. But I’m sure I’ll get bored with that fairly soon.

Has there been fallout from your husband or his new girlfriend about this? Have they responded?

No response [to me] yet.

This story has gone viral; is that something you were expecting? Do you care about what other people are saying or writing about you sending your husband shit?

Honestly, I can’t believe something so ridiculous has gone viral. It all came about when I was pouring my heart out to my editor and told her how I sent him shit in my fury. She said I should write about it. Of the hundreds and hundreds of pieces I’ve written, I can’t believe this had such an impact. But I guess people love a good shit story?

I can’t say I care too much. I do think it’s overwhelming that every time I check my email someone else wants to write about it or I get a thank you email from a woman somewhere in the world, but I guess that the Internet loves to eat this stuff up. To quote my fellow writer friend, people have been behaving badly during breakups since the beginning of time. I don’t think what I’ve done is very groundbreaking, so if people want to talk shit about me for it, so be it.

You wrote on Facebook that you've gotten people telling you to kill yourself. Have most of the responses been negative? Why do you think this has struck such a nerve?

Actually, that was one of a few that came in that day. I’m not sure why I should kill myself for sending shit in the mail, but I imagine for men with a fragile ego, a woman who stands up for herself is a threat. It bothered me a little right after I got it, but as a woman who’s been writing online for over five years now, it’s not the first or last time someone will tell me I’m worthless and need to kill myself. Although it would be nice if these people could not do so anonymously. I put my name on everything; they should woman-up and do the same. Other than those few trolls, most people have been really positive, in a “hell yeah, I wish I’d done the same” sort of way.

If you could go back in time, would you still send it? Was it cathartic to do it and/or to write about it?

Absolutely. It’s shit. If this is the worst thing I ever do, I think I’m okay. It was very cathartic to send it and even more cathartic to write about. I’ve always written candidly about my relationships and my sex life, because it doesn’t just feel freeing, but I like to think that it provides solace to other women. Who hasn’t wanted to do something insane or over the top when they’ve been betrayed?

Has it gotten easier to deal with his cheating since the story has become public?

I’d say yes, in some ways. I know I’m not the first person to have been cheated on, nor will I be the last. At first, I was too humiliated to discuss it or the fact that my love for him was dying even before all this mess took place, because it is a failure and failure can feel embarrassing. But as I said, I’ve been writing about my relationships for so long, that it seemed almost fitting to put this out there, too.

Do you have any advice for a woman (or man) in a similar situation, who's sad and angry and hurt and isn't sure what to do about it?

Honestly, take the high road. I realize that’s contradictory to my own actions, but I do believe the best revenge, if that’s what you’re seeking to quench the sadness or anger, is to go on and live your life and love again when you’re ready. When you take a risk on love, you’re also risking the fact that it might all fall apart someday, but who hasn’t had their heart broken more than once? As much as I’m still reeling over what my husband did, I consider him a lesson in the journey of life, as hokey as that might sound. In loving him and losing him in such a fashion, I’m changed, but I’d say I’m changed for the better and not for the worse.