Sorry, eating chicken is indefensible: The real horrors behind America's most popular meat

Chicken is seen as cheap protein and convenient food. But the labor practices and "killing line" are horrifying 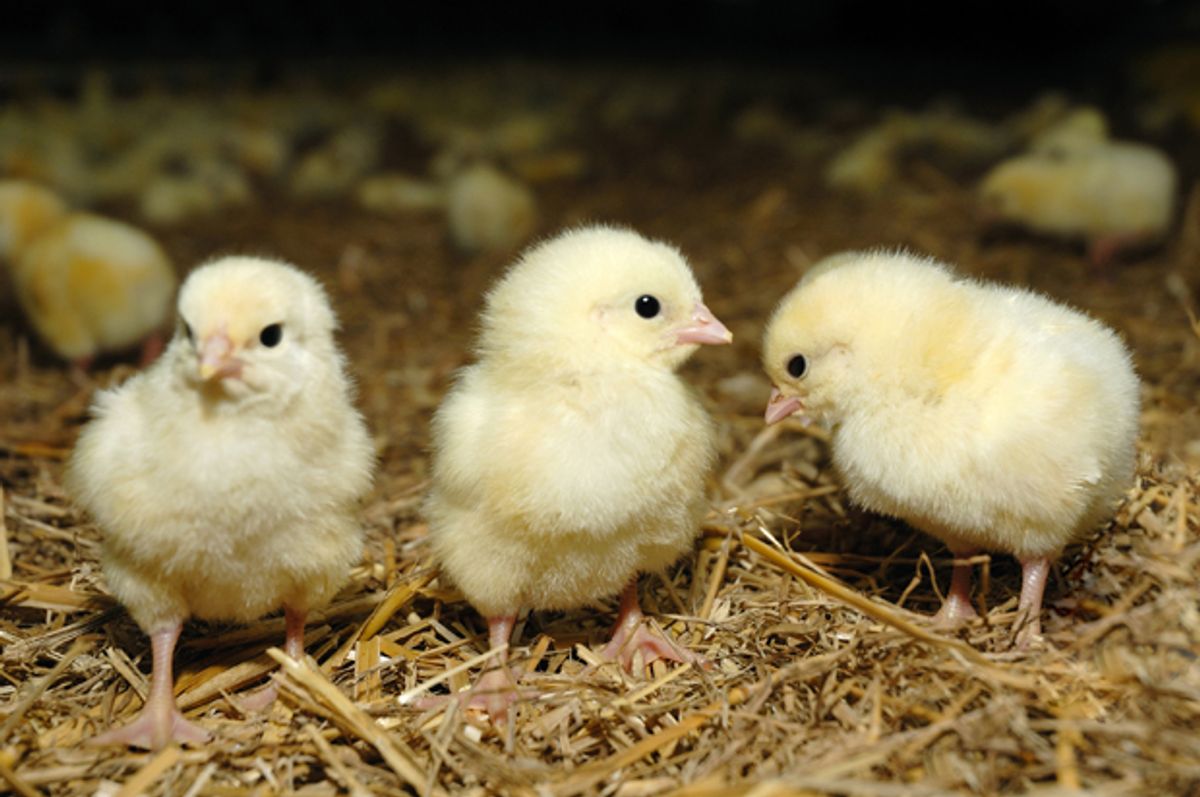 Before slicing off your next bite of chicken, nibble on this for a moment: To get that bird to your table, workers make at least 20,000, sometimes up to 100,000, slicing and grabbing motions every day. To keep up with a "killing line" that runs ever faster to deliver America's most popular meat to our plates – a breakneck rate of 140 birds a minute – a largely immigrant workforce of roughly 250,000 endures chronic and crippling injuries for poverty wages.

To churn out millions of processed chickens – 30 million a day, and a record 89 pounds a year per American consumer – the poultry industry relies on severe yet normalized worker exploitation: chronic pain, lifelong repetitive motion injuries, and humiliation. After hours slicing through thousands of birds, knives grow dull, skid off the cold slippery parts, stabbing workers in the hand or arm. Poultry workers are still routinely denied bathroom breaks; some report wearing diapers to avoid soiling themselves while processing our chicken dinners without a break.

These “lives on the line,” the title of a powerful new Oxfam America report, are the human reality behind our meals – and it turns out we are all paying a heavy price for so-called “cheap chicken.” This toll includes tens of thousands of workers maimed on the job each year, crippling bodies and livelihoods; billions of dollars in federal contracts to Tyson Foods and others, despite their long record of worker mistreatment and safety violations; and massive public expense for workers’ emergency room visits and ongoing healthcare needs. (While there is no specific breakdown for the poultry industry, the National Safety Council estimates all workplace injuries and fatalities cost taxpayers $198 billion in 2012.)

The Oxfam report amplifies a growing movement pressuring the poultry and meat packing industries to both pay and treat their workers better. Just before the report went public, on October 23, Tyson announced it will increase worker pay at some of its plants; that same day, OSHA launched a program to encourage employers to improve worker safety. Earlier this year, after pressure from the Food Chain Alliance and other groups citing labor practices, the Los Angeles Unified School District postponed renewal of contracts with Tyson and Pilgrim’s Pride to provide lunch meat.

At the root of Big Chicken's mistreatment of workers is the economic and political clout of a few powerful corporations and their industry lobbying arms, the National Chicken Council and the American Meat Institute – which have successfully pressured both Democrats and Republicans to speed up the assembly line and weaken regulations such as injury reporting. The top four companies – Tyson Foods, Pilgrim's Pride, Sanderson Farms and Perdue Farms – control 60 percent of the U.S. poultry market, churning out products under more than 30 name brands, according to Oxfam's report.

While the industry touts officially declining injury rates, research by Oxfam, OSHA and others shows poultry companies discourage injury reporting by pressuring ailing workers to return to the assembly line – often leading to severe chronic injuries. A federal rule change secured by the industry in 2012 also restricted which injuries need to be reported. Even official injury data show disturbing hazards: poultry workers are five times more likely than the average employee to get hurt on the job, and seven times more likely to get carpal tunnel syndrome.

Yet more troubling, surveys of chicken factory workers in Alabama, conducted by the Southern Poverty Law Center, found 72 percent had experienced a work-related injury, 77 percent suffered cumulative trauma disorders in their hands and wrists, and 86 percent reported hand and wrist pain, swelling, numbness and inability to close their hands.

At the core of these disastrous conditions is a deadly perfect storm of soaring consumer demand for "convenient" and "cheap" protein, and a government that's far more responsive to the industry’s production concerns than to the health and safety of a quarter of a million workers.

As chicken consumption has tripled since the late 1960s, to 89 pounds a year for the average American today, the industry has ratcheted up production speeds and squeezed its workers ever tighter to maximize profits. As chicken is sliced and diced into smaller parts to meet demands for convenient food, Oxfam reports, workers pay the price through increased repetitive motions to make all those cuts.

What do we do to end the brutalities of the killing line? Oxfam America is urging the industry’s top four companies to clean up their act, increase wages and transparency on worker injuries, and to“publicly commit to core labor rights and to ensuring the health and well-being of their workers.”

We must also insist that government do its job with our tax dollars. Following Oxfam’s report, 15 members of Congress sent a letter urging OSHA to crack down on poultry industry labor abuses. Why only fifteen? Meanwhile, the Obama administration has allowed assembly-line speeds to increase dramatically, and has made matters worse by allowing more companies to conduct their own safety inspections (aka, fox guarding the henhouse). As Food and Water Watch documented in 2012, “Company employees miss many defects in poultry carcasses” – including “defects such as feathers, lungs, oil glands, trachea and bile still on the carcass.” OSHA remains woefully understaffed, able to inspect just 1% of all US workplaces, according to a 2015 study by the AFL-CIO. Hiring more workplace and food safety inspectors, and pressuring companies to hire more workers to staff the killing line, would help enforce protections and reduce both food contamination and worker injuries.

It may not be convenient, but we cannot escape the fact that the chicken we eat comes from sweatshops that endanger both workers and consumers. America’s most popular protein comes to us through the systematic exploitation of immigrants, refugees, prison inmates, and other Americans who have no other job options. This routinized mistreatment – structured into the chicken industry’s production and profit calculations and into our weekly food budgets – must end.

Christopher D. Cook is an award-winning journalist and author. His work has appeared in Harper's, The Economist, the Los Angeles Times and elsewhere. He is the author of "Diet for a Dead Planet: Big Business and the Coming Food Crisis." He can be reached through www.christopherdcook.com.