Wall Street is finally getting its comeuppance: Why new global regulations are a vital step in the right direction

After years of "too big to fail" outrage, an international regulatory body has unveiled a policy with some teeth 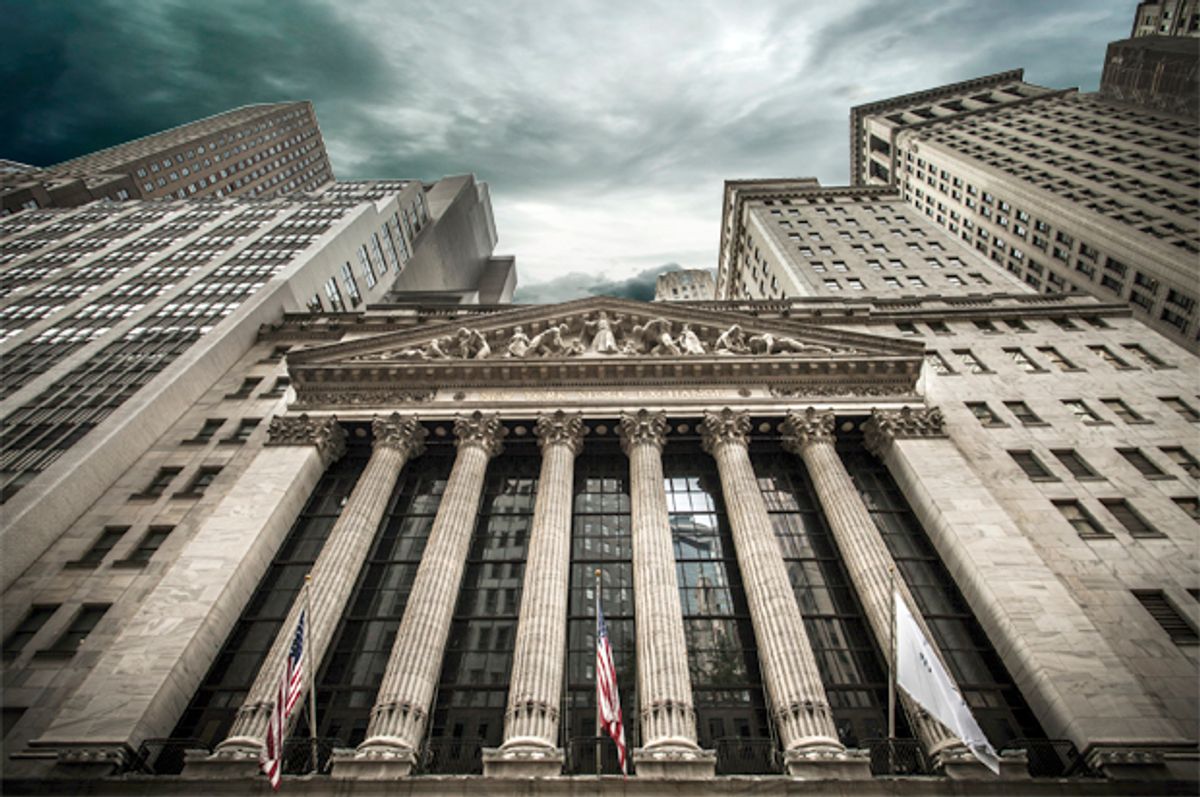 People all over the world have been appalled and infuriated by “too big to fail” banks receiving taxpayer lifelines rather than facing the consequences of their hazardous actions. After the financial crisis, governments vowed to change the rules so this would never happen again, and the public rolled their eyes, cynically figuring that government bailouts of failing banks were as immutable as the seasons.

That public outrage has gradually driven a more robust post-crisis response as we get further and further away from the event, an unusual and encouraging scenario. The latest action, from the global banking regulator known as the Financial Stability Board (FSB), would force the world’s 30 biggest banks to raise over $1 trillion in additional funds that can be used to absorb losses in a downturn.

This welcome turn of events, announced yesterday by the regulatory body, does not eliminate the need for insistent financial reform activism; instead, it proves its worth. Only outside pressure has pushed regulators toward what were previously seen as unattainable targets. And because there’s so much more to be done, reformers should not close up shop but work even harder.

The FSB’s new rule is called the “Total Loss-Absorbing Capital” (TLAC) standard. TLAC represents a new kind of debt that can easily be liquidated in the event of a crisis, with creditors taking the hit, instead of taxpayers in a government bailout. Instead of a bailout, you have a “bail-in,” with the TLAC debt among the first in line to offset losses.

It’s important to understand that banks don’t want high levels of capital; they’d rather finance their operations through borrowing. That’s because increasing borrowing creates more profit. To devise a simple example: If a bank makes a $100 investment and borrows $80, and the investment goes up 10 percent, they’ve made $10 while risking $20 of their own money, a 50 percent gain. But if they borrowed $95 for that investment, they make $10 while risking only $5, a 200 percent gain. Scale that up and you can see how borrowing is much more lucrative.

But it’s also much more risky. If a bank borrows $80 out of every $100 and the investment drops 10 percent, they have enough in reserve to cover the loss. If they borrow $95 out of every $100, the 10 percent loss makes them insolvent. That’s why reformers believe capital requirements are critical for a safe financial system. Indeed, high leverage – i.e. high amounts of borrowing – was a major driver of the 2008 financial crisis, as small losses were enough to virtually bankrupt major firms.

The strongest intellectual force for higher capital requirements has been Anat Admati of Stanford University. Her book "The Banker’s New Clothes," written with Martin Hellwig, called for a 25 percent leverage ratio, or a limit of $75 of borrowing for every $100 invested.

The idea gained adherents from both sides of the aisle. Conservatives tend to use capital requirements as a catch-all financial reform solution, to deflect even more stringent controls on the industry. (That appears to be Alan Greenspan’s gambit.)

But with both sides making common cause, the momentum has pushed in the same direction. The first post-crisis global capital standard was only 7 percent for the biggest banks. Now, the FSB’s capital standard phases in at 16 percent in 2019, rising to 18 percent by 2022.

Importantly, this is not a straight leverage ratio, which the FSB sets at a peak of only 6.75 percent. The TLAC allows something called risk-weighting, requiring less capital for allegedly safer assets on the balance sheet. This can be gamed, and also tends to move banks into lower risk-weighted assets, which then become very risky. For example, before the crisis sovereign debt issued by countries like Greece had no risk weights, and became a popular investment class, contributing to the Greek debt crisis.

But even with the risk weights, the plan still forces globally important banks to finance more of their operations with loss-absorbing equity. The FSB estimates that the 30 banks affected, from JPMorgan Chase in America to Deutsche Bank in Germany, will have to raise $1.19 trillion by 2022 to meet the requirement. And national governments have the ability to go beyond the floor set by FSB. By one measure, the Federal Reserve’s proposal is even tougher.

The biggest positive to this setup is that creditors know when they lend to a bank that they will take losses if the bank fails. They cannot rely on a government bailout to protect them. And that alone will force more discipline on banks and more scrutiny of the risks they take, at least in theory.

More funding through equity will make banks less profitable. It will also make the world safer. And that trade-off is completely acceptable. Not only does it lower the risk of massively destructive financial crisis, but it ensures that less economic activity leaks out to executive compensation for the financial industry, a key driver of inequality. Indeed, bonuses on Wall Street are expected to come in lower this year, in part due to several new regulatory requirements around capital.

Major mainstream commentators like Bloomberg’s editorial board are already grousing about the FSB’s plan, arguing that the TLAC hybrid of debt that operates as equity is unnecessarily complicated and untested. “How is this better than simply requiring banks to have more equity in the first place?” they ask.

The answer is that it’s not. And that’s why reformers can’t afford to be content. The drumbeat on capital has already moved international regulatory bodies whose typical response to crisis is, well, nothing. Having proven the concept, the prescription for tighter restrictions that get us even closer to Anat Admati’s standard is, naturally, more agitation.

Moreover, capital requirements cannot be the single solution to potential problems on Wall Street. It’s not enough to make sure banks protect themselves when they gorge on risk; we should be limiting that risk appetite in the first place. The Democratic nominating fight has generated several other possibilities, from a tax on bank liabilities and short-term debt to a separation of investment and commercial banking activities. Limiting the interconnection between large financial institutions is more critical to me than loss-absorbing capital, because otherwise the contagion spreads and the system becomes irretrievably fragile.

The good news is that reformers are putting the regulators on the proper track, building walls to protect the public from financial excesses. But it’s just the beginning. Activism doesn’t typically find an endpoint; there is never a Mission Accomplished sign at the end of the trail. The work endures, and the victories along the way are just spurs to even more action.