“Daddy Don’t Go” smashes stereotypes of disadvantaged "deadbeat" dads: "Stability is the biggest gift that you get when you enter the middle class" 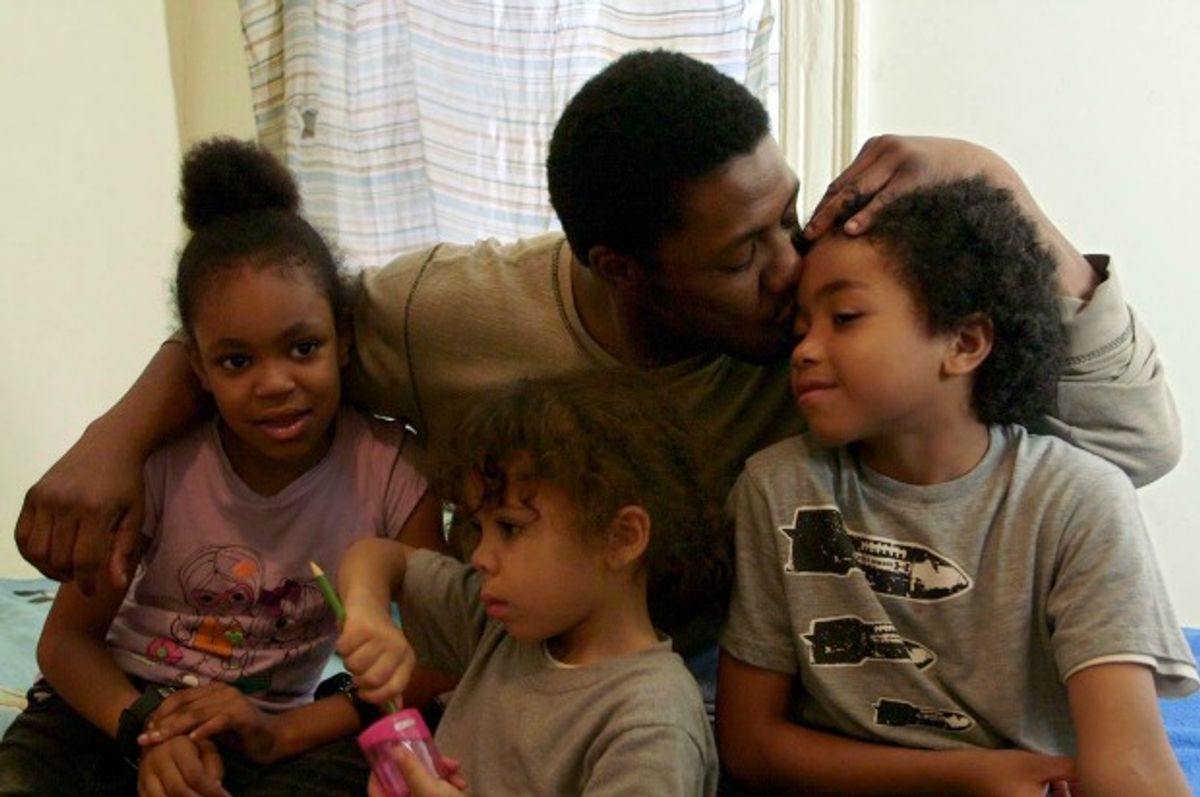 A refreshing highlight at this year’s DOC NYC Festival is Emily Abt and Andrew Osborne’s “Daddy Don’t Go,” which challenges the all-too-familiar, conveniently reductive and hardened stereotype of minority dads that tends to dominate the Hollywood landscape. Shot over two years in the greater New York City area, the documentary’s four main protagonists — Nelson, Omar, Alex, and Roy — prove themselves self-sacrificing, committed and unexpectedly tender fathers as they struggle against homelessness, unemployment, bureaucracy and, in some cases, a criminal past.

The flashing statistics in “Daddy Don’t Go” are brutal: 1 in 3 American children grow up without fathers, and there are at least 1.1 million incarcerated fathers who live in the US. But the numbers also belie a deeper, concealed truth about low-income fathers. A John Hopkins study found that those who might be labeled "deadbeat dads" often spend as much on their children as parents in formal child-support arrangements, but prefer to invest in provisions like baby food, school supplies, and clothing, rather than hand out cash — support that goes unacknowledged in any government surveys or statistics. Even more surprisingly, the study also reported that the proportion of total support offered in-kind was higher among black fathers (44 percent) than non-black fathers (35 percent).

The human factor behind the demographic data emerges within scenes of Nelson, Omar, Alex, and Roy reading to their kids on a subway ride, doing laundry, braiding hair, sharing a sandwich, or tucking them into bed; it’s the small mundane rituals which finally resonate as the significant and poetic in childhood.

I chatted with Abt — named one of Variety Magazine’s “Ten Top Directors to Watch”- about the new kinds of social dialogue and support she hopes to inspire in filming “dads with real, real problems,” as well as the changing gender roles motivated by the rising trend of stay-at-home fathers in the U.S.

Can you tell me what sparked your documentary on disadvantaged dads in the first place?

I have an amazing dad who was a wonderful father to me, but he didn’t have a father himself. So I always had this built-in empathy for disadvantaged fathers who were lacking in role models themselves, who didn’t feel well-parented, but were trying to do things differently by their kids.

But also, I started out as a caseworker in my early twenties — that was my first job. And that was how I came to make my first documentary, which followed four of my clients as they transitioned from welfare to work. I was making films that focused on women protagonists, but men were also often very active in their children’s lives, and I was hearing these stories and wondering, why isn’t their story being told?

Ironically, I think this is my most feminist film to date. What we’re hoping with this film is that it inspires all kinds of dads to lean into the domestic sphere and their parenting roles. Because women can’t progress in a professional setting until men really step up in terms of the home arena.

Absolutely. A good example of that in your film is when Nelson decides to support his girlfriend and her two kids while she gets her GED and trains as an EMT — she even calls  Nelson her “home wife.”

Definitely, fatherhood in general is in the zeitgeist. But more specifically, this whole deadbeat dad stereotype that characterizes disadvantaged dads — often minority dads — as not able and willing seems so played out and tired. So that was our big mission, to replace that deadbeat dad stereotype with positive images of disadvantaged dads who might not be resource-rich or even have stable employment, but definitely want to be present in their kids’ lives.

Right now, our current court system does not support that. Men are seen as wallets, basically. But what if a guy doesn’t have money, but really wants to be a good dad?

Good point. As a filmmaker and an ex-caseworker, what kind of policy changes for disadvantaged dads were you hoping to inspire?

Malik Yoba has been very active in the political arena around this issue, and we’re starting to put together an outreach plan and identify legislative areas where we feel like this film could inspire change. Having Malik and Omar Epps on board to kind of shepherd this project along to make sure that it gets seen by a broader audience is super-important. They both grew up in New York City without dads, and now both have three kids themselves. So they really understand on a very personal level how important this film is.

A lot of surprising reversals of fate happen to these four dads. Was there anything that you wanted to leave in the film, but left out because it was too controversial or personal?

We didn’t actually end up including this in the final cut, but Omar was homeless for a period while we were making the film. Alex was in a shelter, there was domestic violence — just every tough social issue that’s happening in this country happened to those guys.

We wanted the audience to be pushed and pulled and sometimes confused by their decisions, but ultimately, we wanted to present a positive, hopeful portrait of these guys. So that guided a lot of decisions in the editing room. Because there were moments that were less flattering that we felt were very interesting, but not consistent with this overall message of men being there for their kids, against all the odds.

It’s a sad truism, but people who struggle in this country really struggle. We shot almost 300 hours of footage, and there were major ups and downs. Stability is the biggest gift that you get when you enter the middle class.

So true. I think your film reflects that by mentioning the fact that 60 percent of felons in NY state are still unemployed a year after their release. Also, Omar shares that he’s been through 15 different jobs because of his ex-offender past — in your opinion, is there really a second chance for dads with a criminal record in America?

Well, it’s funny that you should mention that because in New York there’s been this movement called Ban the Box. But I’m really happy to say that that’s gone away, because if you’ve gone to prison, when you’re released, you should be able to return to mainstream society. We’re so punitive in this country, and not sympathetic to guys who have made mistakes — sometimes huge mistakes.

Nonetheless, I personally believe in second chances. I know I’ve needed second chances sometimes. If you look at the environment that these guys are growing up in, a lot of times criminal activity seems almost inevitable.

Definitely. At some point in the film, all four protagonists refer to the temptation of “easy money.” Nelson says: “In three days, I could come back with $1,000.” Realistically speaking, if you found yourself in his situation, how could you not at least consider it?

For me the bottom line there is that, yes, they were unemployed, but it’s not like they weren’t trying. I think we have a hard time recognizing in this country that not everybody who wants a job can actually get a job. And people say, “Oh, McDonald’s is always hiring” and stuff like that. Well, if you don’t have teeth, then even McDonald’s doesn’t want you. We have a stubborn unemployment problem that really affects disadvantaged men in this city — I think 50 percent of African-American men in New York City are unemployed. And the Bronx, it has the highest poverty rate of any congressional district in America. That’s why we wove in those statistics, because that was part of the story. We couldn’t ignore it; it just kept slapping us in the face.

Speaking along racial lines, I couldn't help but notice that Roy, who is also an ex-offender, is the only dad in the documentary who ends up receiving any counseling and finding a job. Do you think it’s because he's white?

I don’t think it’s unrelated to the fact that he’s white. It’s always really important to me when I’m making a film that the demographic representation of our subjects mirrors reality, and I definitely wanted to be sure that we had a Caucasian subject because I didn’t want people to say, “My god, this is a black and brown thing.” If you look at actual socio-economic statistics in our country, a lot of times white people are more privileged than minorities; that is the reality. And while he’s an ex-offender and is parenting on his own and can’t afford his own home, he does have these support systems that the other guys don’t.

Do you think disadvantaged fathers in the U.S. should have free access to counseling services to help them become better parents? Roy starts off as the most emotionally repressed character in your film, so it really struck me when, after some therapy, he reveals his nightmares of his father and abused sisters.

I think that story moves a lot of people. But the good news is that we now have President Obama, who is the first President to speak openly about commitment to parenting. He’s kicked off this whole fatherhood initiative, and there’s been some funding earmarked for what they call “father-friendly programs.” That program that you see in our film, nonprofit Forestdale, they’ve certainly been the beneficiary of those kind of government funds. I think any program that puts fathers in a room together to have real talk, kind of AA style, is a very powerful thing.

Now the harder thing is, how do you get the guys there? I hope the film opens more doors for funding along those lines. I really believe in work programs, training programs, because I think for men in particular, it really hurts their self-esteem when they’re not working. If we can incentivize guys to stay away from street life and criminal activity by giving them a job - it doesn’t have to pay that much, just a decent, steady job — that seems like good policy to me.

What also struck me about these disadvantaged dads was that they weren’t just great parents. They were also trying to be better human beings by addressing their own fractured childhoods, by giving their own kids a better childhood.

Totally. We had this line from Alex that I wanted in the movie so bad, but it didn’t work for various editing reasons. Basically he was saying, “My son really needs me, and I really need him too.” That to me is just the unspoken theme throughout the film, which is that as much as these kids need their fathers, the fathers derive so much love and satisfaction and self-esteem from being dads.

We were talking about it to Omar once and he was like, “If people see my story, and they see that with all the problems I have, I’m still a great dad, then hopefully they’ll say, ‘Well, maybe I can step up too. I can do a better job too.’ ”