The truth about the P.C. wars: Radicalized wingnuts & disdainful liberal elites are the real problem

For all the handwringing about "p.c. run amok," the truth is that there are far more pernicious forces at work 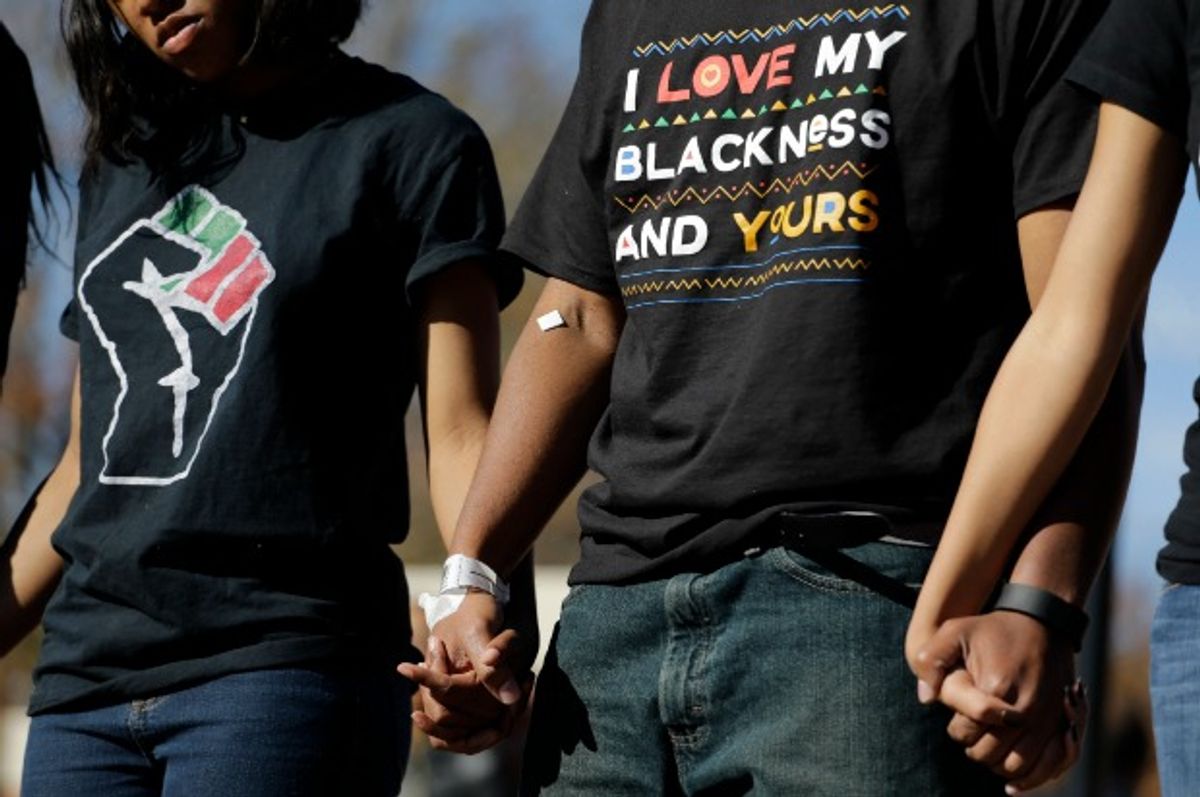 Student protesters at the University of Missouri-Columbia (Jeff Roberson/AP)
--

Over the last week, students protesting racism at Yale and Mizzou (and other campuses) became national news. The backlash has been vociferous, both from the right and from many liberals. To take extreme examples, the Federalist declared that the protests show “that it’s time to burn the universities to the ground,” and RedState called the Mizzou football strikers “Cowardly Liberal Lazy Douchebags.” At its core, the “PC culture” backlash is driven by fear of young people, particularly young women and young people of color, challenging unjust institutions. But the hand-wringing also illustrates a key divide between the left and right: how they treat activists.

One leading liberal writer declared that the campus protests represent something deeper, and more sinister, than anti-racism activism: “American political correctness has obviously never perpetrated the brutality of a communist government, but it has also never acquired the powers that come with full control of the machinery of the state.” The event that led to the protestors being unfavorably compared to past Marxist governments. The event may be distasteful, but it takes quite an imagination to conjure up a scenario in which it is evidence of creeping Stalinism.

However, there are indeed movements in the United States that consider violence or threat of it a legitimate means to political change, that frequently harass reporters, that silence academics and researchers. The problem is you find them on the right. There are the conservative activists who brandish fully-automatic weapons in public spaces. There are the pro-life activists who harass, both verbally and physically, women obtaining abortions -- on a wide scale and in an organized manner. One in five abortion clinics reported “severe violence” in the past year (blockades, clinic invasions, bombing, arson, chemical attacks, stalking, physical violence, gunfire, bomb threats, arson threats, and death threats), and other forms of harassment have increased dramatically in the past four years (see chart). The gun rights movement has muzzled research about gun violence by the Centers for Disease Control. Recently a conservative billionaire sued Mother Jones in an effort to tie up funds and destroy the magazine. The Koch brothers have succeeded in funding hundreds of university departments and have attempted to use their clout to determine curriculum. Republican governors have used their political power to cut funding to university centers that they find ideologically inconvenient. Though the real police have killed nearly 1,000 people this year, many elite columnists are more concerned about the “PC police” who have merely called for more inclusive universities.

“What we saw at that student rally was democracy in action, not fascism. Fascism means something more than a thing one does not like. Fascism means a system of social organization that concentrates power and doesn’t just discourage dissent but organizes the State against it.”

There are many things in the world today, and even in America, that resemble actual fascism or creeping fascism. Student activism is not one of those things.

The liberal reaction to many recent events points to an asymmetry in how party elites treat their activist bases. Consider the Keystone XL protestors, who recently won a key victory in the fight against climate change. Though Jonathan Chait considers climate change “the most dire threat to humanity,” he condemned the Keystone XL fight as a “huge mistake” (and even compared the protestors to Republicans trying to shut down the government). Similarly, though liberals are deeply concerned about rising inequality and stagnant wages, the Fight For $15 was widely denounced by elite liberals as either a “hopeless waste of time” or “worrisome.” This disdain of activism also applies to the #BlackLivesMatter movement, which has been vociferously criticized for shaking up various Democratic presidential campaigns this year.

The vein connecting each story is the same: Very Serious Liberal Elites care about the environment and black lives and higher wages, certainly, but they want to bring about change without the pesky business of actually involving environmentalists, black people or workers. At its core, this is what the complaints about “p.c. culture” and “campus radicalism” are about: The right will criticize any movement for the advancement of subordinated groups and elite liberals will criticize any movement they can’t control. Liberal elites want to help the oppressed but not listen to them, and certainly not give them a seat at the negotiating table.

This isn’t surprising: The powerful always want to dictate how social change will occur, and they will condemn whatever means those fighting oppression use. Just three years before key civil rights victories:

“In May 1961, of those respondents (63 percent) who had read or heard something about the freedom rides, nearly two-thirds (64 percent) disapproved while only 24 percent approved. When asked if civil rights demonstrations such as ‘sit-ins’ or ‘freedom buses’ would ‘hurt or help’ the civil rights movement, over half the respondents opined that they would hurt.”

The same demonization of #BlackLivesMatter has already occurred: in a recent poll, 59 percent of whites said BLM “distracts attention from real issues” compared to 26 percent of African Americans.

Yet, on the right, activists are praised, even when their tactics are violent, deeply anti-democratic and antithetical to free speech. The reason is simple: Liberal columnists (overwhelmingly white and male) tend to want to be seen as arbiters of sensibility and bastions of Very Serious Thought. Right-wing columnists see themselves as foot soldiers in a movement. Though liberals hasten to criticize the Fight For $15 because it might kill jobs, conservatives cheer on activists who want to hold the national debt hostage (threatening economic collapse) to achieve partisan political goals. Liberal columnists criticize students for demanding a safe space, but conservative columnists are more than happy to support a movement that regularly resorts to violence, even assassination. This is not to say liberals should begin tolerating violence as a means to political progress, merely that they should stop pretending progressive activists are a threat to American democracy, and start criticizing the actually illiberal activity of conservatives. They should further recognize that activists have an important role to play in creating progressive reform, even though their tactics may reflect the fact that they don’t have access to many levers of power.

There are some signs that this may be changing, with recent news suggesting that liberal donors may consider funding Black Lives Matter. That is a welcome change. As I have noted numerous times, a key asymmetry between the left and right is that on the right, donor networks are far more comfortable working both within and outside of the Republican Party. There will always be a money advantage on the right: consider that Americans For Prosperity, just one arm of the Koch network, has a budget of $150 million in 2015, while the State Innovation Exchange, proclaimed by the media to be an ALEC-killer, is hoping to raise $10 million. However, the right’s organizing advantage is manufactured: the product of a liberal elite that sees activism as a malign force to be crushed and marginalized rather than a movement to be encouraged.