The West vs. the world: Facebook, the media, and the ignorance which guarantees more attacks

We ignore terror in Kenya, Beirut and when our bombs destroy a Doctors Without Borders hospital. It's at our peril 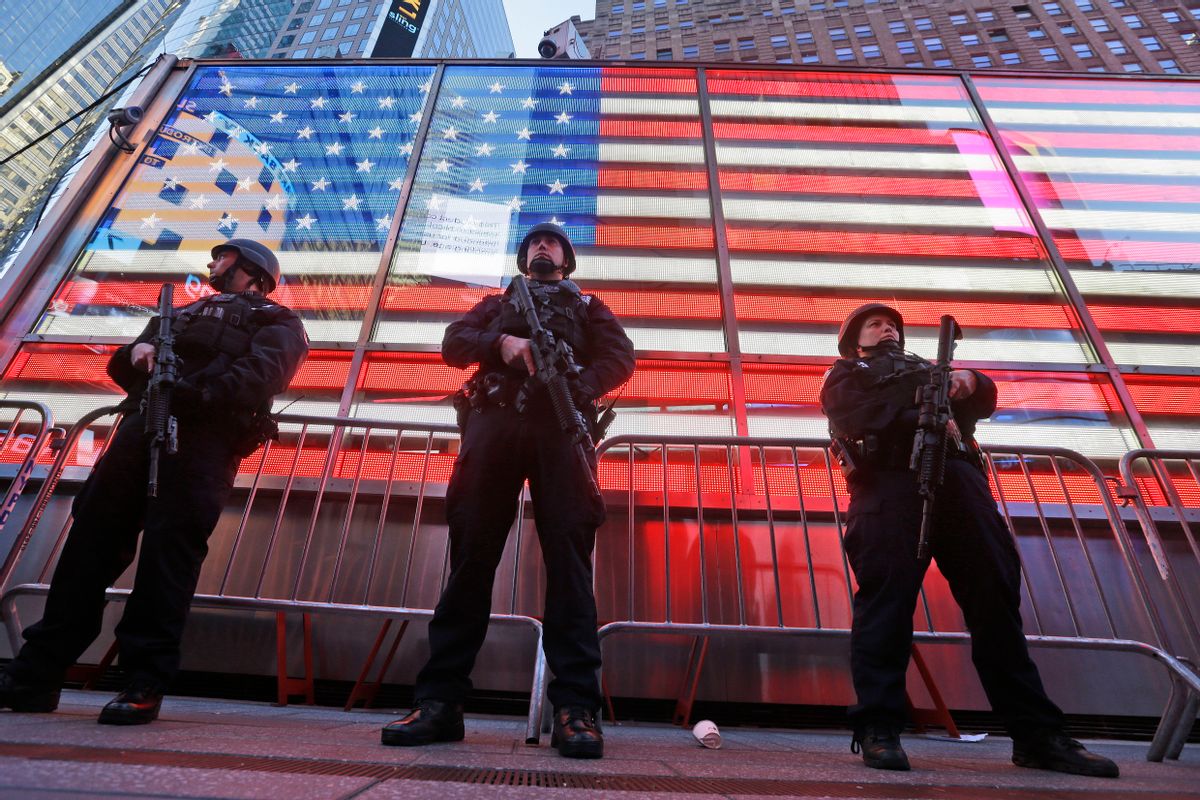 The terrorist massacre in Paris was a gruesome illustration of an ideology opposed to modernity, frightened of freedom, and hostile to life. The live music fans, restaurant patrons, and pedestrians who lost their lives in brutality and without warning deserve the world’s sympathy and support. The human impulse to mourn is an expression of the goodness in direct competition with the atrocity vendors and death merchants who too often dominate headlines.

If only the West, and most specifically the American media and political establishment, felt the same way about all victims of violence and warfare, the world could begin to measure progress for shared security.

While the attacks in Paris provided further revelation of the sickly embrace of the death instinct from ISIS, the mass media reaction to the coordinated killing exposes how the American mainstream operates according to a hierarchy of victims. The hierarchy functions as an appraisal process; assigning some lives high value, some lives low value, and summarily dismissing others with hideous euphemisms like “collateral damage.”

At the highest level of the hierarchy of victims are Americans killed by terrorists. The prioritization of American death for American coverage makes sense to a certain degree. Any nation’s media is going to report, first and foremost, stories that affect those living that country, but the American-centric concentration on international developments often produces political blindness. The U.S. government’s murderous drone strike program became a topic of debate, for about five minutes, after Anwar Al-Awlaki, an American citizen turned radical cleric for jihadists, became a target and casualty. The Middle Eastern residents of countries America regularly bombs – many of whom are much more sympathetic than a religious fanatic who gives theological justification for terrorism – rarely, if ever receive mention.

Just below Americans on the hierarchy of victims are inhabitants of Western nations. The global 1 percent includes anyone who makes over $34,000 a year. Relatively wealthy and educated residents of cities like Paris, Madrid, and London, who generally share American values, will receive an outpouring of compassion and grief when terrorists commit the crime and moral evil of murder. President Obama will immediately issue an official statement. The American media will drop all domestic stories to provide viewers with around the clock coverage of the attack’s aftermath, and millions of Facebook users, because they are aware of the atrocity, will express solidarity with the victims and their families. Any show of kindness and camaraderie with people undergoing pain and suffering is healthy and just, but the inconsistency of mourning among Americans is transparent and outrageous to poor people throughout the developed world, especially those who fall victim to similar attacks.

The third hierarchy of victims are those who live in the undeveloped world; hungry, uneducated, and unlike those lucky enough to live in the international elite. Days before the massacre in Paris, suicide bombers murdered dozens of people in Beirut. Shortly after the Paris attack, terrorists slaughtered 149 people in Kenya. High officials of the United States government did not immediately respond to the attacks with statements of support for the Lebanese or Kenyans, the American media has barely even acknowledged the attacks, and Facebook has not made the flags of those respective nations available for profile picture covers. The piety of most Americans would cause them to claim that innocent life in Kenya or Lebanon has the same value as innocent life in France, but the political, cultural, and popular reaction to the respective attacks in all of those countries indicates a dark double standard. When First World people are murdered, America must stop and mourn. When Third World people are murdered – in equal or greater numbers – business as usual continues. The dead are barely worthy of a headline on an internet sidebar.

The lowest level of the hierarchy of victims lives so far deep in the basement of American consciousness that many people are unaware that they even exist. The corpses collect dust, while politicians and pundits delightfully and ignorantly sleep, dine, and go about their business upstairs. These victims are those who the American government kills.

Joanne Liu, the international president of Doctors Without Borders, condemned the airstrike as a war crime. If that language seems inflammatory, one might want to consider that since the U.S. did not give any advanced warning of the bombing to hospital staff, it violated even its own rules of war. The Pentagon’s justification for the attack changed four times in four days, inviting skepticism from even the most committed nationalist.

The possibility of the United States violating the Geneva Accords with a deliberate assault on a hospital, administered by one of the most reputable and effective charities in the world, is a scandal of drama, intrigue, and lawlessness possessing catastrophic consequences. American media coverage – from investigate reports to talking head debates – has barely even looked in the direction of the ashes of the bombing. The story rates lower than minor developments in local politics, because its victims have no value in American culture. According to recent polls, fewer than half of Americans expressed concern that drone strikes result in the loss of innocent life, and the commander of those strikes – President Barack Obama – reportedly told a White House aide that he is “really good at killing people.” The leader of the free world allegedly bragging about his ability to end life elicited little commentary from members of his own political party, the oppositional party, or the press.

Most disturbing is the inarguable reality that America destroying a Doctors Without Borders hospital is not an aberration, but an apotheosis of a campaign to kill throughout the Middle East. On a weekly basis and without debate or discussion, the United States continues to bomb Afghanistan, Pakistan, Yemen, Somalia, Syria, and Iraq. A recent report on theIntercept uses a cache of classified government documents to demonstrate that ninety percent of drone strikes result in the loss of innocent life. The leaked data coalesces with the conclusion of the human rights group, Reprieve, stating that the U.S. government has targeted 41 terrorists for assassination, but killed 1,147 people. Stanford Law School and the law school at New York University collaborated in the early stages of the drone program to thoroughly search all the available data on its victims. They too determined that the overwhelming majority were innocent civilians.

It is now the official policy of America to casually disregard the destruction of innocent life, including children, throughout the Middle East. The victims of the drone strikes are invisible – never appearing in the news or receiving acknowledgement in political debate – because they have no value. The American appraisal relegates them to mere props and set pieces in the endless, ever expanding “war on terror.”

The bodies left in bomb craters are also props for terrorists organizations, such as ISIS, who cynically use them for recruitment posters and promotions; convincing a generation of angry, young men to live with one foot in the afterlife in the name of vengeance and martyrdom.

Michael Scheuer, the former CIA officer who led the unit dedicated to studying and monitoring Osama Bin Laden, has long maintained that American intervention in the Middle East is the primary motivation for terrorism against the West. It should surprise no one that ISIS has claimed responsibility for the ghastly display of cruelty in Paris, and that they have cited the French “crusader campaign,” meaning military involvement in Muslim territories, as its reason. “Blowback” is the internal CIA term for unintended, and often fatal, consequences of Western invasion and intervention in the Third World. It is naïve to believe that the nihilistic and oppressive soldiers of ISIS, Al Qaeda, or any other terrorist organization would instantly transform into Quakers if the West extracted itself from Muslim countries, but without Western targets, they would eventually turn on each other to fight their sectarian conflicts over faith-based visions of the apocalypse.

ISIS is a monster, and like many monsters, it deserves slaying. History teaches, however, that meddling in the medieval furor of religious wars by invading countries and bombing cities will only create more monsters, and write more headlines like those out of Lebanon, Kunduz, Kenya and Paris.

As even CIA testimony proves, anti-war and anti-interventionist advocacy is not the property of hippie fantasy. It is a rare intersection of morality and practicality. People in the Third World hate watching their family and friends die just as much Westerners do.

The heartbreaking and horrific sights out of France, Lebanon and Kenya remind everyone of the nobility and necessity in working to reduce the amount of violence in the world. The work begins with the dismantlement of the hierarchy of victims, and the inculcation of the conviction that all innocent life has the same value.