5 months ago, Sheen was hurling insults at his ex online. Now he wants to "better" himself through HIV fundraising 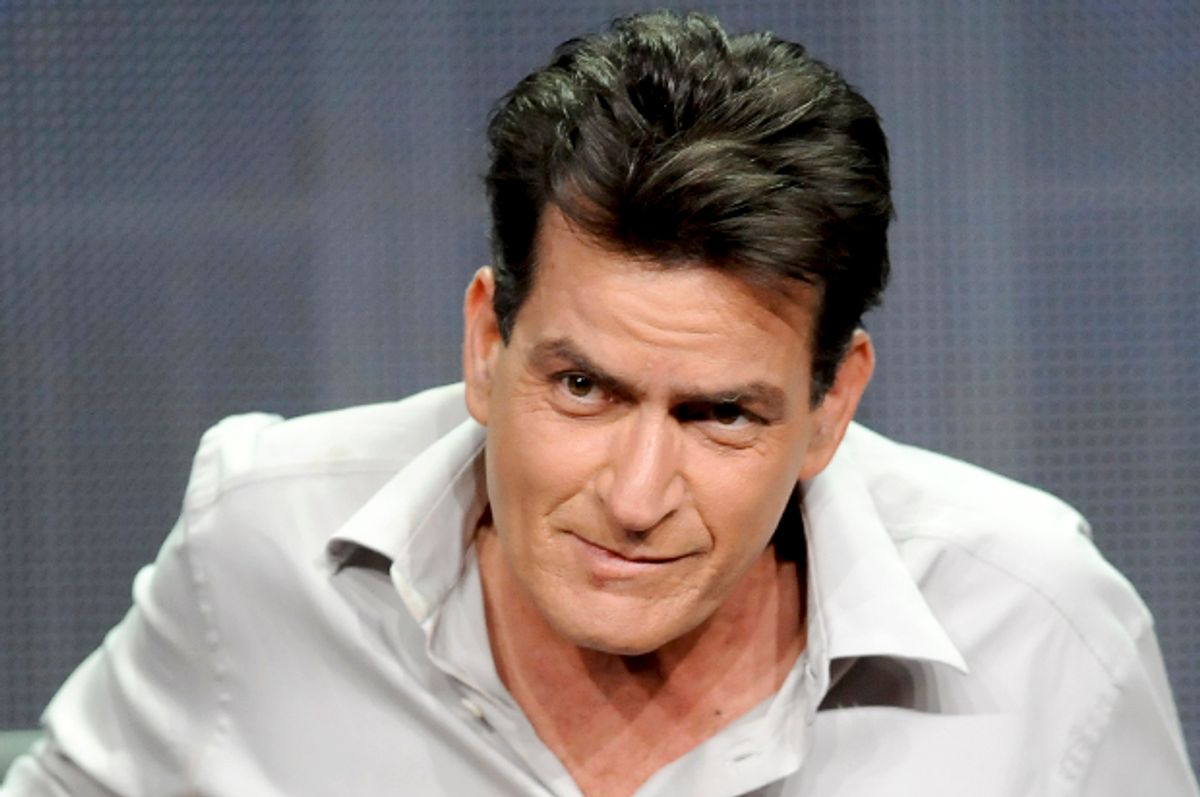 It was a very different Charlie Sheen from the notorious libertine of reputation. This was not a man who trashes hotel rooms and brags of “banging seven-gram rocks." Instead, confirming long-standing rumors and saying, "I'm here to admit that I am in fact HIV positive," Charlie Sheen took to the "Today" show Tuesday morning to announce he's entering "a time of more of a philanthropic approach in my life."

Sitting with Matt Lauer in front of a very special "CHARLIE SHEEN SPEAKS OUT" backdrop, the former highest-paid actor in television appeared relaxed and relieved as he disclosed that he was diagnosed "roughly four years ago." Sheen says he decided to come forward because "I have to put a stop to this onslaught, this barrage of attacks and of sub-truths and very harmful and mercurial stories that are about me, that threaten the health of so many others that couldn't be further from the truth."

Sheen's health has been the subject of vivid speculation from tabloids of late -- including The National Enquirer, which recently referred to him as a "sex-crazed 50-year-old actor." The Enquirer has claimed Sheen was "indulging in high-risk sex practices" and "potentially spread the devastating virus to dozens of unsuspecting women."

But Sheen tells Matt Lauer that simply isn't true. "It's a hard three letters to absorb; it's a turning point in one's life," he says, but adds he's told every sexual partner he's been with of his diagnosis and that it's "impossible" he's transmitted the virus. In a statement in his typically colorful way with words, Sheen now says, "In and around this perplexity of difficult time, I dazedly chose or hired the companionship of unsavory types. Regardless of their saltless reputations, I always led with condoms and honesty when it came to my condition. My truth became their treason as a deluge of blackmail and circus of deceit."

He says that over the past few years, he's been blackmailed to the tune of several million dollars. He insists he never withheld his medical information, saying, "Having divulged it is the reason I'm in the mess I'm in with all the shakedowns." He tells Lauer that he recalls a sex worker going into his bathroom and taking photos of his medication, and threaten to share the image. But he's not paying anybody any more, he says, "Not after today, I'm not. I release myself from this prison after today."

Later in the broadcast, Sheen appeared with his physician, Dr. Robert Huizenga, who says that Sheen is doing well on his medication but also acknowledges, "We're petrified about Charlie. We're so, so anxious that if he was overly depressed, if he was abusing substance, he would forget these pills -- and that's been an incredible worry." Sheen says he is not doing any drugs currently and only drinking "a little," and that he's been diligent about taking his medication. He wants now to use his platform as an opportunity. "I have a responsibility now to better myself and to help a lot of other people," he says, "and hopefully with what we're doing today others will come forward and say, 'Thanks Charlie.'"

Sheen's seemingly well-rehearsed message is quite a departure from the man who, in 2011 — right around the time he says he learned of his HIV status — was showing off his "goddess" girlfriends and boasting that his exploits could make the Rat Pack look like "droopy-eyed armless children." But while Lauer, Huizenga and Sheen acknowledge the actor's allegedly previous wild ways and his propensity for a dark side, what was conspicuously ignored Tuesday was Sheen's long and well documented history of downright scary and cruel behavior.

Lauer introduced Sheen as a man "known to millions for his award winning body of work on television and the movies" — but you may also know him as a man who just five months ago publicly referred to his ex-wife and mother of two of his children Denise Richards as "a despicable charlatan who sux ISIS ass" and an "evil terrorist sack of landfill rash." Or maybe as the man Richards claimed threatened her life, and who served two years probation after his then-girlfriend Brittany Ashland claimed in 1997 he'd "knocked her unconscious and split her lip so badly that she required seven stitches…. and threatened to kill her if she told anyone about the assault." Six years ago, Sheen's now ex-wife  Brooke Mueller placed a 911 call in which she claimed, "My husband had me with a knife and I'm scared for my life, and he threatened me. I thought I was going to die." And watching three men on "Today" gently talk about the actor's condition, I suspected that's what plenty of viewers remember him for.

No one deserves HIV. A virus is not a punishment. Consensual private sexual behavior is nobody's business. And blackmail and extortion are crimes. But as outlets like "Today" focus on Sheen's "troubled history with drug addiction, pornography and prostitutes," they seem to forget that he also he as a troubled history that includes serious allegations of physical and verbal abuse. Sheen says he now "will not shun away from responsibilities and opportunities that drive me to help others, and deliver a cure." I hope he means it and I hope he can do it. It'd be a welcome change from the Charlie Sheen we've all been watching — and haven't forgotten — of the last several years.