Preying on irrational fear over refugees, Rand Paul wants to cut off their "welfare" 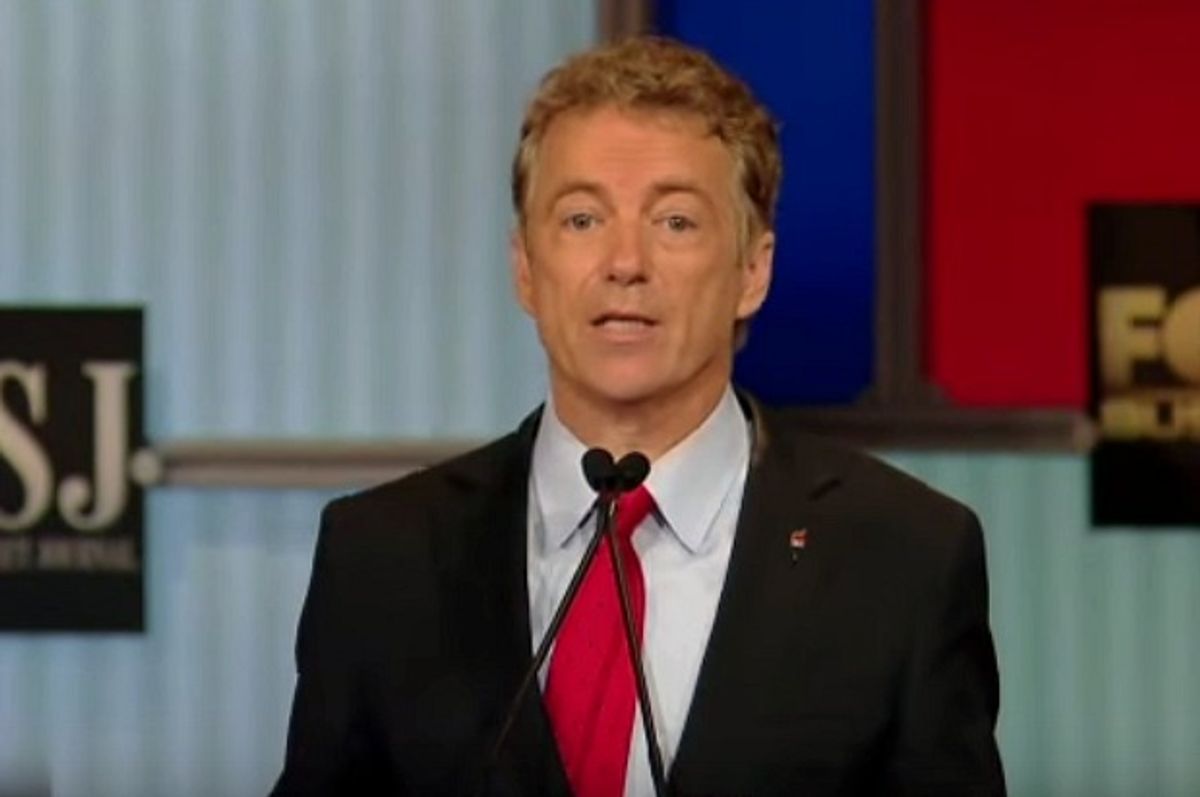 Trying to figure out who has offered the worst reaction to the Paris terrorist attacks and the irrational panic over Syrian refugee resettlement is a difficult task, given the wealth of horrid proposals put forth by our elected officials and leading political candidates. You have budding fascists like Donald Trump, who is talking about surveilling and closing down mosques and is open to the idea of forcing American Muslims to register with the government and carry special IDs. A top Tennessee Republican wants to round up all the Syrian refugees in his state and force them to leave, while the Democratic mayor of Roanoake, Virginia argues that Japanese internment is the precedent we should adhere to. Indiana governor Mike Pence has already turned away one Syrian refugee family. We’re sending a strong message that we’re ready to abandon our democratic ideals and treat highly vulnerable people like garbage because we’re spooked.

I want to carve out a special mention for Sen. Rand Paul, who responded to the refugee panic with a petty and punitive piece of legislation that is politically craven and morally unjustifiable. Here’s Paul on the Senate floor making the case that refugees can be very dangerous people, and we should stop giving them “welfare.”

Here’s the actual amendment Paul has drafted, which cuts off aid to refugees from Syria and pretty much every other country from Morocco to Indonesia. Paul is framing this measure as a pushback to President Obama, the refugee-lover-in-chief, and a nod to fiscal responsibility.

This is disgusting. Paul’s amendment is not a message to the president – it’s an unsubtle effort to portray Muslim refugees as terrorists. There’s a good reason for making federal aid available to refugees: they’re a highly vulnerable population in a foreign country with little in the way of a support network and significantly diminished economic opportunity. “Most refugees enter the U.S. without income or assets with which to support themselves during their first few months,” the Office of Refugee Resettlement explains. The idea behind providing federal assistance to refugees is to ease their economic adjustment and increase the pace at which they eventually become economically self-sufficient. Paul wants to cut off this aid and make the already difficult life of a refugee even harder, just to teach Obama a lesson. He wants to punish refugees for no other reason than they’re refugees.

Presenting this as a measure in prudent cost-cutting is also nonsense. Even if you agree that the government is borrowing and spending too much, slashing refugee benefits really won’t do anything to fix that problem. The total amount appropriated to the Office of Refugee Resettlement in FY2013 for all refugee services was $623 million – or about 0.02 percent of all federal spending that year. We’re not exactly breaking the bank when it comes to providing a minimum standard of living for people fleeing from war zones and human rights abuses. If you’re honestly concerned about the state of the country’s finances, “welfare for refugees” should not be at the top of your list of things to cut.

And that’s just it – Rand’s not really concerned about how much federal aid for refugees is costing us. He’s more interested in fostering resentment against refugees and stoking fears of terrorism for political gain.