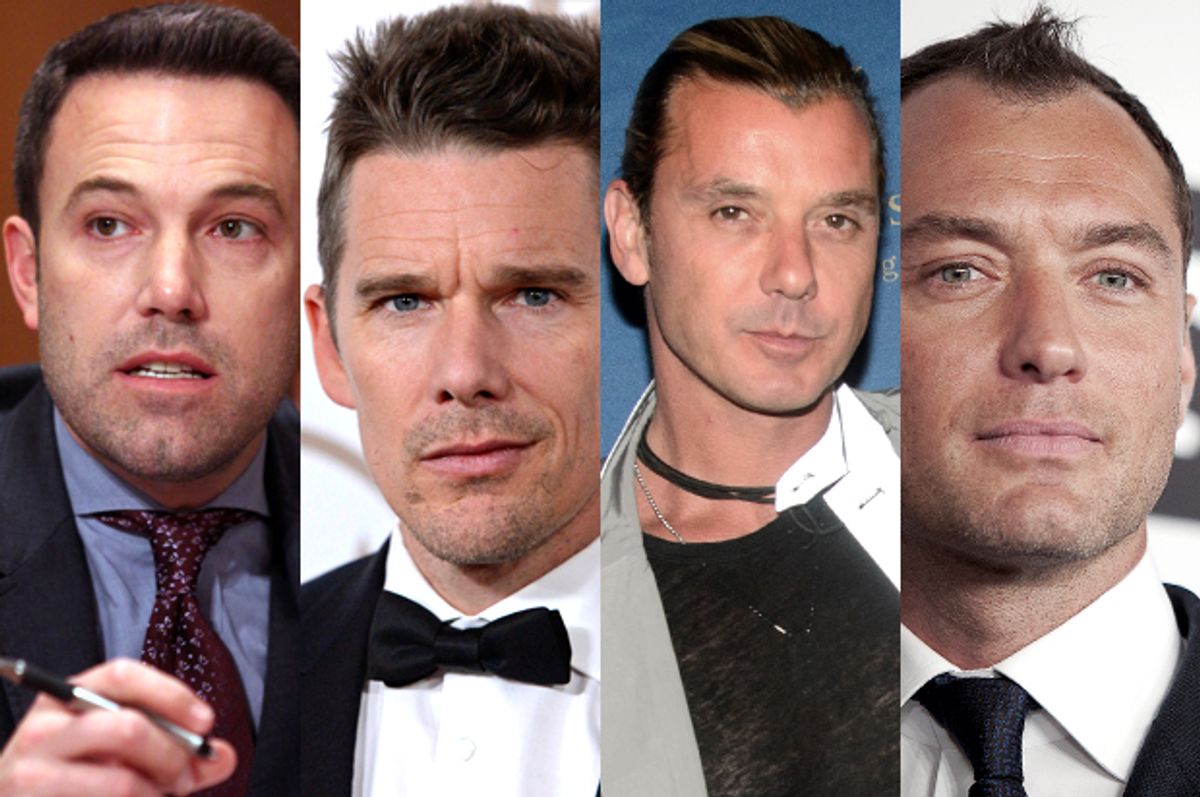 The economy may be terrifying and jobs may be drying up, but according to the New York Times' Styles section, it looks like there's at least one potential new booming career path. Ladies, maybe you could be the plain-looking nanny to a rich and famous family. (No hot chicks need apply.)

In a piece this weekend that's so New York York Times Styles' section it hurts, writer Laura M. Holson explores "The Nanny Factor in Hollywood Marriages." Sure, plenty of American families seem to survive without Dad and the babysitter hooking up, but let's look at the GROWING MENACE. There's the recent implosion of Gavin Rossdale and Gwen Stefani's thirteen year marriage, replete with rumors Rossdale "had a three-year fling with Melinda Mann, the babysitter for their three sons." And it was only this summer that Ben Affleck and Jennifer Garner consciously uncoupled along with whispers that Affleck, likewise, has been putting it to "the winsome 28-year-old who had cared for their three children."

Is your marriage safe from winsome 28 year-olds? Is anyone's, really?

Given the "Hey, it happened to Uma Thurman" evidence, you can see why some cautious mothers are apparently deciding to try to game the system. Katie Provinziano, the founder of a Beverly Hills nanny agency, tells the Times, "We get those requests all the time, 'I don’t want someone pretty.' People are picky. They tell you what they want." But she adds, "We can’t discriminate based on those factors. It’s our job to take that mom and tell her, 'You can’t have that conversation.'" And the founder of a Silicon Valley agency gets around the issue by explaining, "When we present candidates, we don’t present a photo. So there isn’t an opportunity for people to say: ‘Whoa, she’s awfully pretty. We don’t want her to come.’” Writer Holson, meanwhile, says that some moms insist they hire "older" nannies "not out of jealousy" but "they want a professional uninterested in becoming a member of the Gulfstream entourage."

I suppose the idea that stories like this are meant to illuminate is that if you are living with someone who's trying not to drink, you don't stock the bar with tequila — though as Provinziano notes, "If cheating is going to happen, it’s going to happen, whether it’s the nanny or not." Yet the prevailing tone of the piece is one that puts forth the idea that a portion of the male population — one significant enough to merit a full feature about them — will helplessly reach for the nearest woman in their house in much the same manner that a drunk would, in fact, reach for a bottle of tequila. Men, victims of their poor impulse control, need to be patrolled, need to have their opportunities to bang anyone younger than their wives and handy limited. Somehow, this can be achieved via the hiring choices of their well-heeled wives.

Of course, closeness can breed intimacy in any dynamic involving adults of the same sexual orientation. But while the salacious story of the predatory woman who's supposed to be innocently minding the children but is romping with the dad instead is the stuff of porn plotlines, hot nannies are not exactly a growing threat to the institution of marriage. Though Holson certainly doesn't seem to be approving of this thinking, she — and more importantly, the Times — aren't doing a whole lot to challenge it, either. And while it's not sexy or newsworthy, here it is: Men are not babies whose temptations need to be placed on the high shelf lest they be reached for. And fictional murderers from schlocky movies of the early nineties don't prove anything about real families.