We need to abolish the DEA: There's no federal agency that does more harm to the people it serves

Republicans are fond of listing the federal agencies they'd get rid of. Let's start with this one 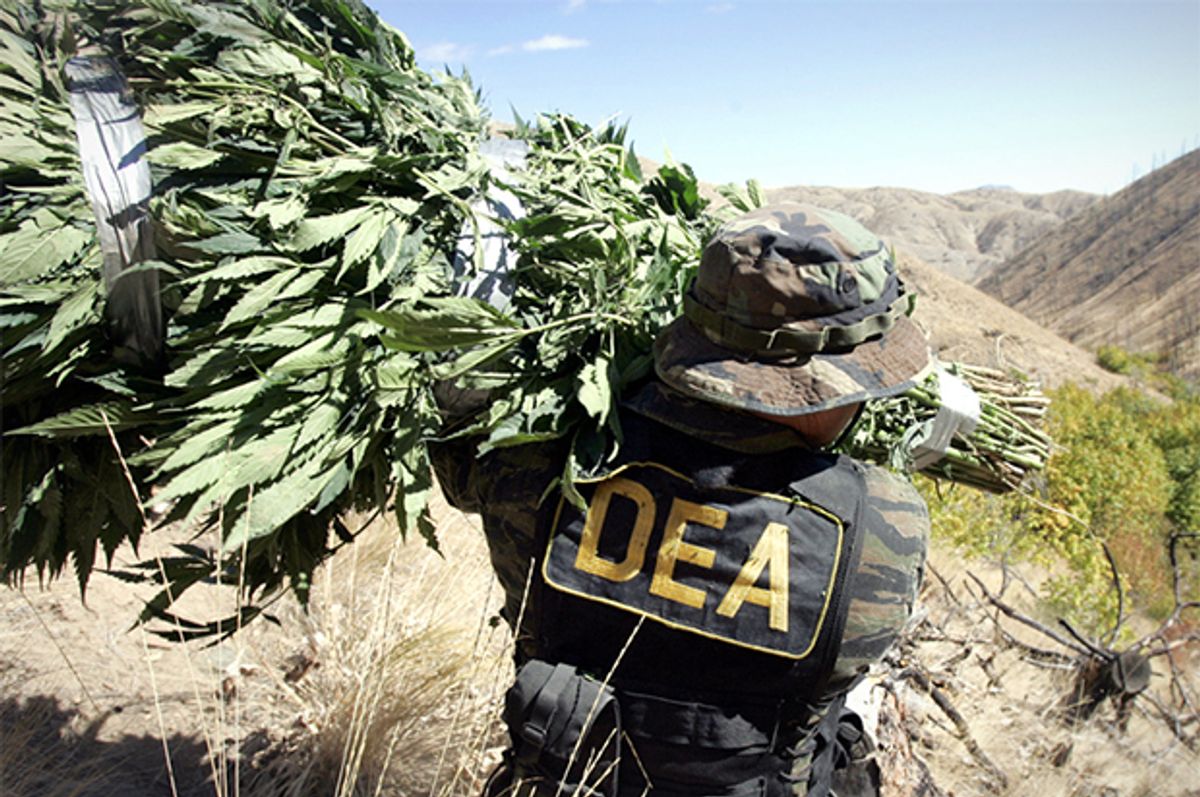 Over the years, Republican presidential candidates have boasted of plans to eliminate wide swaths of the federal government. Sometimes, they have trouble coming up with concrete ideas. In 2011, Rick Perry famously claimed that he wanted to eliminate three federal agencies but faltered after naming the Commerce and Education Departments. During the most recent debate, Ted Cruz named the Commerce Department as one of the five federal departments he would eliminate—twice.

I am here to help: We should eliminate the Drug Enforcement Administration, an agency that has so much trouble holding employees accountable that, as USA Today reported earlier this year, it failed to fire "agents who investigators found attended 'sex parties' with prostitutes paid with drug cartel money while they were on assignment in Colombia."

The DEA was recently the subject of another damning USA Today investigation, this one revealing a dragnet domestic wiretap program that appears to use a pliant state court judge to get around federal laws. The DEA, according to USA Today, has "built a massive wiretapping operation in the Los Angeles suburbs, secretly intercepting tens of thousands of Americans' phone calls and text messages to monitor drug traffickers across the United States despite objections from Justice Department lawyers who fear the practice may not be legal." One state court judge in Riverside County, Calif., who previously work as the county's chief narcotics prosecutor, authorized nearly all of the intercepted calls in question, an unknown but apparently very large number being DEA-related, totaling "more than 2 million conversations involving 44,000 people."

Last year, Riverside County Superior Court Judge Helios Hernandez "signed off on almost five times as many wiretaps as any other judge in the United States."

The wiretaps are supposed to be closely related to Riverside but are in fact being used, sometimes secretly, for nationwide enforcement operations.

The program looks so sketchy, in fact, that Justice Department lawyers in Los Angeles "have mostly refused to use the results in federal court because they have concluded the state court's eavesdropping orders are unlikely to withstand a legal challenge." That they are at least sometimes kept secret—because of a practice called "parallel construction" where agents use sketchy wiretaps to find evidence, and then use that evidence as the basis to tip off other investigators to develop independent evidence on a suspect—means that they won't have to.

In plain English, federal prosecutors reportedly believe that a federal court judge would likely deem that these wiretaps are illegal under federal law. This raises some unanswered questions. The DEA and federal prosecutors are all part of the very same Department of Justice. Are higher ups, including Attorney General Loretta Lynch, aware that DEA agents, her subordinates, are engaged in a massive wiretap dragnet that other DOJ employees appear to think might run afoul of federal law?

Prior USA Today reporting investigated a former program in which "the Drug Enforcement Administration had been secretly gathering logs of Americans' international phone calls...nearly a decade before the 9/11 terrorist attacks, and provided a blueprint for the far broader National Security Agency surveillance program that followed"

Many federal law enforcement agencies rampantly violate people's rights. But what's remarkable about the DEA is that they do so with perhaps the least evidence that they are advancing any public good whatsoever.

On any given day, the DEA is boasting about a new drug seizure, conveying the commonsense but totally wrong idea that every pound of marijuana, heroin and cocaine seized is a pound of drugs that won't be on American streets and in the lungs, veins and noses of its people. That is a profound misunderstanding of how drug markets work. Every pound of drugs the DEA seizes is part and parcel of an enforcement campaign that is itself creating the very profits that drug cartels exploit: the risk of death and imprisonment created by prohibition, after all, is what adds a premium to the price. That prohibition premium is a drug traffickers' lifeblood.

The recently installed DEA chief Chuck Rosenberg has so far proven to represent the worst of drug warrior dogma. He has embraced the so-called "Ferguson effect," which dangerously and without any evidence posits that violent crime is on the rise (which by and large its not) because protesters have made police too scared to do their jobs. This drew a rebuke from the White House. And he recently called medical marijuana a "joke." In response, tens of thousands have signed a Change.org petition calling for his ouster. But why stop with Rosenberg?

The DEA's sole responsibility is to prosecute a drug war that has been a total failure. Rather than effectively suppressing drugs, its very enforcement activity calls forth the most ruthless entrepreneurs who can reap the extra profit created by prohibition. It is time to end the drug war and abolish the DEA.