The Donald now contends U.S. Muslims celebrated the attacks. Conservatives have convinced themselves of even worse 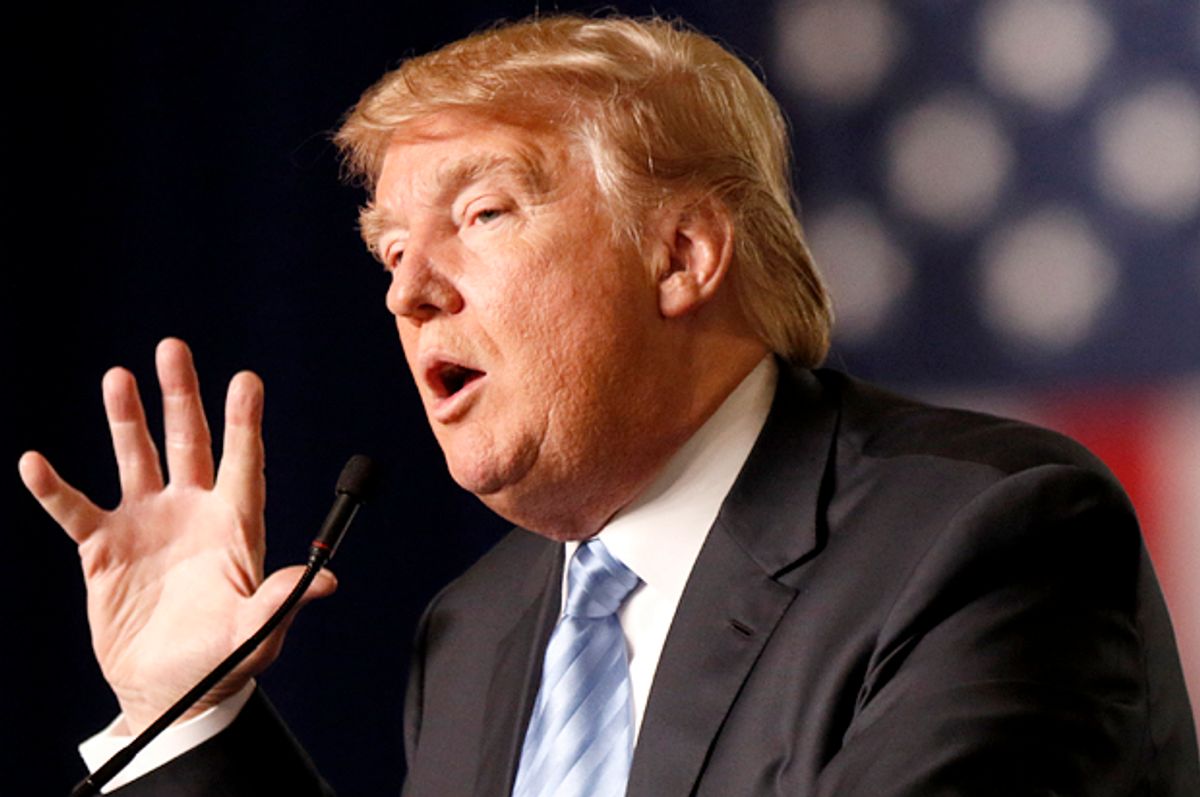 Donald Trump claims thousands of Muslims in New Jersey rejoiced as the Twin Towers fell during the 9/11 attacks. He says he knows this because he saw it in the news, a magical news that no one else but Ben Carson saw, although Ben Carson now says oh wait, no he didn’t. So Trump is alone on this one, and I have a theory as to why, and it goes something like this: It never happened. Like 99 percent of the crap that comes out of Donald Trump’s mouth (and Donald Trump’s garbage Twitter feed!), it’s just a thing he made up as he went along. Trump knows his followers love red meat almost as much as they love attacking black and Latino people (though not quite as much), so he throws it to them with regularity. The truth be damned.

These kinds of conspiracy theories are par for the course in the GOP these days. Muslim no-go zones, Benghazi, gun confiscations, FEMA concentration camps, yadda, yadda, yadda, the list goes on and on. Just throw Trump’s totally fabricated cheering jihadist Muslims on top of the pile, right between a million “false flags” and unopened boxes of Manchurian candidates.

Boy, did Republicans ever hit the fear-mongering jackpot in 2014! First, an unprecedented number of unaccompanied Central American children arrived at the U.S. border. About the same time, an Ebola outbreak in West Africa caused massive waves of public panic. Seeing an opportunity to combine two boogeymen—immigrants and infectious disease—a bunch of right-wingers got right on that, spreading the word that the arrival of unaccompanied migrant children in the country could have lethal consequences. Georgia Rep. Phil Gingrey, Indiana’s Todd Rokita and Iowa’s Steve King all made sure to concern troll the country with open letters and speeches that essentially stated, I’m not saying those kids have Ebola, I’m just saying that if they do, we’re all gonna die. Right Wing Watch recalls that Phyllis Schlafly, who really should give it a rest sometimes, outdid everyone with little speech that also threw Obama-blaming into the mix, thus winning Republican bingo.

“Out of all the things he’s done, I think this thing of letting these diseased people into this country to infect our own people is just the most outrageous of all,” said Schafly, just getting warmed up. “Obama doesn’t want America to believe that we’re exceptional. He wants us to be just like everybody else, and if Africa is suffering from Ebola, we ought to join the group and be suffering from it, too. That’s his attitude.”

The funny thing about conservatives is that they frequently accuse the left of deifying Obama, yet they credit him with powers only some otherworldly being would possess. He’s going to kill all the old people! He hypnotized all the young people! He makes tornadoes and hurricanes and droughts! And he’s the secret scion of one of the most famous African-American activists of all time.

Back in 2008, right-wing caricature Pamela Gellar posted a long, nutty, faux-investigative piece purporting to reveal that Obama is the secret love child of Malcolm X. The theory rests precariously on the “fact” that Obama doesn’t have Kenyan physical features, which the post says includes “modest stature under six feet, round faces, small chins, wide set eyes, slanted back foreheads, and retracted hairlines.” You know who else did not have those features? Malcolm X. Case closed, amiright? We could stop there, because things are already pretty airtight, but Gellar also offers this:

Drunk on radical ideology, Stanley “Ann” Dunham became pregnant in the summer of 1960 in Seattle WA with the baby of a prominent black liberal activist...In the early 1960’s there were noticeable very few African Americans on the streets of Honolulu, and Obama Sr. was the only Black man from Africa on the island. Ann Dunham, in an effort to legitimize her mixed race baby, would have sought out one of the only black men on the island to convince him to use his name. And so Barack Hussein Obama Sr. was likely pressed into service as father and husband in name only.

After everyone started to make fun of her, Gellar posted a note saying she wasn't the author of the post and doesn’t think Malcolm X is Obama’s dad, but that she posted the article because she liked how well-researched it was. Uh, okay.

3. A forcible gay takeover is coming.

There’s an old Onion article headlined, “'98 Homosexual-Recruitment Drive Nearing Goal,” which is funny because there are people who actually think the gays are out there actively trying to up their numbers. One of these people is Pat Robertson, who last year matter-of-factly stated that “girl-on-girl movies” are turning kids gay, as films so often do. Then there’s pastor Kevin Swanson, who claims parents who let their kids watch Frozen don’t realize “this cute little movie is going to indoctrinate my 5-year-old to be a lesbian or treat homosexuality or bestiality in a light sort of way.” (What is it with conservatives and Frozen, by the way? Mormon blogger Kathryn Skaggs said the movie, which is really just a bunch of drawings made to look like they're moving, promotes “normalization of same-sex sexual behavior.”)

Family Research Council president Tony Perkins compared the LGBT community to the Gestapo, stating, “I’m beginning to think, are re-education camps next? When are they going to start rolling out the boxcars to start hauling off Christians?” Jody Hice, a Baptist pastor and U.S. rep. from Georgia authored a book in which he reprints the “gay manifesto,” which claims the gays are planning to sodomize pretty much everybody, except that it’s actually taken from a satirical piece written in 1987 by Michael Swift. And Charles Van Zant, a Baptist minister who sits in the Florida House, told parents that the Common Core curriculum will “attract every one of your children to become as homosexual as they possibly can.”

4. Walmarts are being turned into prison camps, or something.

The broader conspiracy theory here is that Jade Helm 15, a series of exercises in military preparedness staged in states around the country, was a covert test run for the imposition of martial law. But my favorite part of the theory—because the nuttier, the better—is that Walmart would play some part in the nefarious scheme. After the big box retailer closed stores in California, Florida, Oklahoma and Texas for plumbing repairs, the wingnut blogosphere lit up with paranoid theories. There was the one about how “the military is secretly using recently closed Walmarts to stockpile supplies for Chinese troops who will be arriving to disarm Americans.” And the other one that “tunnels were being built by the U.S. military beneath closed stores in an attempt to launch a takeover of Texas.” Some, like conspiracy site All News Pipeline, didn’t offer up specifics, but let people make up their own nightmare scenarios.

“Something sinister is going on at Walmart and there's a big reason for them to be hiding what that is," the site's authors wrote, based on no evidence at all. "Could these monstrous buildings with underground tunnels be transformed into something out of our worst dreams?”

There are plenty of reasons to be suspicious of Walmart, but leave it to conservatives to choose the one that isn’t real.

5. Earth Day is a socialist plot.

This one is probably popular with the type of person who thinks feminists get pregnant just to enjoy aborting their babies and the Klan is really more of a social club. Pretty much the only “evidence”—I’m using that term so loosely it’s basically meaningless here—is that April 22, when Earth Day is celebrated, is also Vladimir Lenin’s birthday. (A more reliable source says the date was probably chosen because it fell between spring break and finals, so college students could take part.) Conservative talk radio host Brian Sussman has a whole rundown on the "real" history of Earth Day, which he describes as “an event designed to assault capitalism, free-markets and mankind” and a “Marxist falderal designed to hammer the American way.” I was struck by another conservative description of the day, which really goes for it:

Earth Day was created to champion the control of all property by a centralized government. This has already been achieved to a large degree in the United States by the use of the Endangered Species Act and the actions of the Environmental Protection Agency. When the politicians and bureaucrats are in control, the goal of the government is not to own everything but to control everything. This is the Fascist brand of Socialism.

Just wow, right? What a bunch of drama queens.