We've never had a break from ELO: Do ya really need to hear this song, ever again?

Jeff Lynne is back with ELO's first album of new material in almost 15 years, but the old stuff will not die 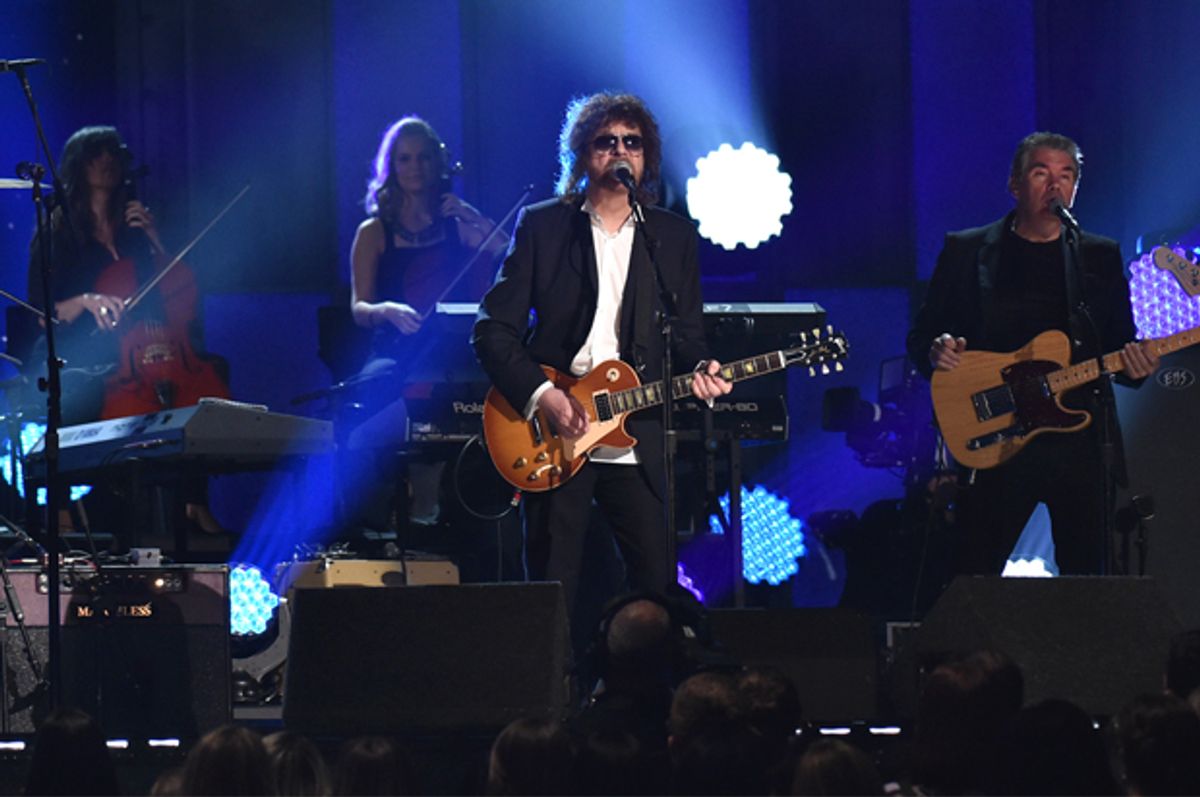 I have the Electric Light Orchestra on my iPod because… I own an iPod. And I tear up when I hear the do wop, dooby doo do wop background vocals to the ballad “Telephone Line,” because my brain is connected to my body and I’m not a fucking monster. But I have never truly embraced ELO., who are currently having a moment thanks to the release of their first album of new material in a decade and a half, "Alone in the Universe" (credited to Jeff Lynne’s ELO) and a few key TV appearances including the Grammy Awards, Jimmy Fallon’s "Tonight Show" and "Jimmy Kimmel Live."

Part of my trouble with the band is Mr. Lynne himself. I like to look a man in the eye before I play air guitar to his towering riffs like that on “Ma-Ma-Ma Belle,” and the guy (who is sighted) has not removed his sunglasses in public in 40 years. There’s also a beard issue. Lynne’s persona is so un-rock 'n’ roll that he makes Dave Stewart of Eurythmics look like Darby Crash. In the ’70s, ELO’s colorful logo was inescapable, but it always reminded me of Milton Bradley’s remedial computerized “game” Simon.

My father, a gambling man, once had a stake in a horse called “Strange Magic,” after another ballad which appears in Sofia Coppola’s "The Virgin Suicides" (although maybe Dad merely posed in the winner’s circle with the horse, as he used to like to do that). AM and FM radio were saturated with ELO hits. “Turn to Stone,” “Sweet Talkin’ Woman,” and “Rockaria!”— an aria… made of rock! You just couldn’t get them out of your head.

In the ’80s and early ’90s, while ELO went into something of a false hiatus (they still ruled radio, only now it was the “classic rock” format), Lynne gained a reputation for taking once nitty gritty guitar playing singer-songwriters like George Harrison and Tom Petty and making their records sound like they were recorded at the bottom of a wet Heinz beans can … and backed by ELO. People bought these records by the multi-millions. Lynne was also the second Traveling Wilbury to never remove those fucking shades (it’s amazing Ian Hunter wasn’t in that band).

Now before you roll up your sleeves, I’m not saying ELO were charmless or even pretentious (the whole O thing with the strings and the classical gas). I am confessing that I simply chose to resist them (I even had a very beautiful woman re-enact most of "Xanadu" in my apartment, to my utter lack of interest, but that could be my antidepressants in action). However, there’s a difference between resistance and escape, and there ain’t no escaping Mr. Beardo Shades. These days, it feels like I’m the only one who even wants to try.

Yes, when Paul Thomas Anderson ended his masterpiece "Boogie Nights" with the then-20-year-old (give or take) “Livin’ Thing,” it was a nifty touch. We had taken a realistic tour through the lurid ’70s and come out in the tacky early ’80s, just in time for the L.A. Olympics of ’84. The gifted Generation X director, who’d clearly grown up on the band, and his talented team had primed us for something a bit retro and kitsch.

But now, ELO has no context. Its licensing is a shark frenzy thrashing wildly along popular culture’s reef and devouring every bit of flesh in its path. The Great White of the bunch is easily “Mr. Blue Sky.” What is it with that song? Is it medicinal? Our era’s “Happy Days are Here Again?” I don’t know if we need “Mr. Blue Sky” in these perilous times, but I know I could never hear it again and be nearly ace, which is sad because structurally it’s a more or less perfect song, as close as Lynne gets to his beloved Fab Four. According to the band’s IMDB entry, “Mr. Blue Sky” has been used about 18 times in various film and television projects over the years. It’s as if there’s a conference room somewhere filled with a music supervision team drinking cold coffee and one says, “OK, for this act break, when all seems lost, Evan looks deep within himsel… oh fuck it, let’s just use ‘Mr. Blue Sky,’ how much is it again?”

It’s like how they used to use Jeff Buckley’s version of “Hallelujah” whenever something tragic happened on-screen, like Mark Harmon getting shot in a bodega on "The West Wing" (all he wanted was a candy bar). Such lassitude takes us really to the point where “Mr. Blue Sky” achieves the opposite of what Lynne most likely intended — his own genuinely uplifting and optimistic version of “Here Comes the Sun.” Instead of elevating the masses, it brings us down (“groos…” ) and drills open a hole in our heads where the rain comes in.

Speaking of, have you ever actually read the lyrics to “Evil Woman?” It’s some mean shit.

OK, now that I’ve had my say, I'm good. No, I am not proposing a moratorium on the use of ELO songs here; especially in the midst of their triumphant comeback. I simply want to see them used more creatively and less literally — "Kingpin," an otherwise perfect film, uses “Showdown” during a bowling… showdown. How about something from the new album, or what the kids used to call a “deep cut?” Or maybe a cut from "The Move," Lynne’s pre-ELO band? But before you reach for “Do Ya,” their big hit, just… think… of Evan… okay?