"America has forgotten about us": Former allies in Vietnam flee persecution

During the Vietnam War, we fought alongside the Montagnards. Now they live in hiding -- with no aid on the horizon 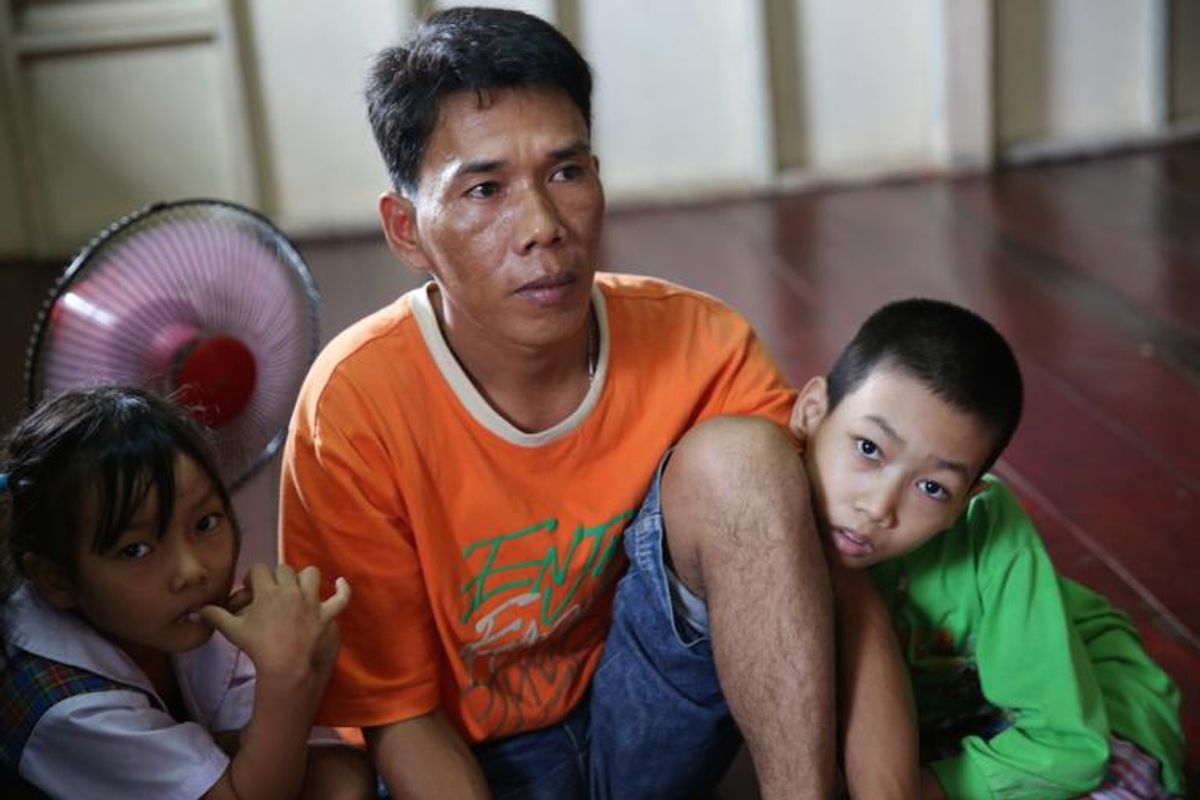 But after the war, the ethnic and religious minority Montagnards, or “mountain people,” long at odds with the Vietnamese government, paid a steep price. Some were imprisoned, others fled into jungles or suffered years of ethnic discrimination and religious repression, human rights groups say.

Today Kpa is living in hiding in a dingy house on the outskirts of Bangkok, among a wave of hundreds of Montagnards who fled to Thailand and Cambodia in the last year claiming religious persecution — the latest chapter of a troubled history.

Kpa said local Vietnamese authorities last year harassed and detained him and others. But while he’s pinning his hopes on getting to the United States, so far he and other asylum seekers among the former US tribal allies are fighting an uphill battle for both refugee status and international attention to their plight.

Cambodia has refused to offer asylum interviews to nearly 200 Montagnards, dismissing most as economic migrants. A roughly equal number are in Thailand, facing a years-long wait for an interview with the United Nations refugee agency, unable to work legally, living in poverty and under the threat of detention.

Human rights groups and US Montagnard exiles — who want to see the US put more pressure on Vietnam to halt abuses or help expedite resettlement — say the issue is being sidelined by other migrant crises, regional geopolitics and the Trans-Pacific Partnership trade agreement pending before Congress.

“America has forgotten about us,” said Rev. Y Hin Nie, of the United Montagnard Christian Church in Greensboro, North Carolina, a state that’s home to the world’s largest Montagnard population outside Vietnam. At least 12,000 Montagnards and their descendants live there today, including the first resettled in the 1980s, partly because of a Special Forces base at Fort Bragg.

US State Department officials said many asylum seekers have some connection to the US, and all are treated equally. US officials have raised human rights concerns with Vietnam. And while there are reported instances of people being persecuted on religious grounds, officials said they have not seen evidence of a “coordinated plan” to do so by Vietnam’s central government, which has denied abuses.

But Human Rights Watch says abuses continue against the Montagnards. While Vietnam’s constitution gives all people the right to freedom of religion, the US Commission on International Religious Freedom this year again recommended that Vietnam be named a “country of particular concern,” partly because of repression of religious groups — including Montagnard Christians, independent Buddhists and others — that the government views as challenging its authority.

John Alles, a Special Forces veteran who advocates for the Montagnards, said the US could do more for the group, but their limited numbers in the US mean they haven’t been a priority.

“If you asked most Americans about the Montagnards, they wouldn’t have a clue what you were talking about,” he said, despite their depictions in Vietnam War movies from John Wayne’s ‘The Green Berets’ to ‘Apocalypse Now.’

Montagnard is a term coined by the colonial French for various indigenous Central Highland tribes who speak a handful of different languages. Many were converted from animist religions to Christianity by French and US missionaries, and were courted by the French military during its war with Vietnamese communists in the 1940s and ’50s.

In the 1960s, it was America’s turn: an estimated 61,000 Montagnards helped the US fight against the North Vietnamese. Tens of thousands were recruited and trained by US Special Forces to help hold the highlands or as mobile strike forces, according toa 2014 Senate resolution introduced by US Senator Richard Burr, R-NC, to recognize their contribution. (It was never enacted.)

“They were good fighters, fearless. And very loyal. They bonded with us,” said Joe Rimar, a former Green Beret who served with the “Yards,” as American soldiers nicknamed their indigenous allies. He fought alongside them in 1966 and 1967 in Kon Tum Province, where he said many of the men’s families lived near their camps in bamboo huts.

Rimar said many Montagnards believed the US would help them secure autonomy, only to see American military involvement end in 1973. “We betrayed them,” he said.

While some fled into jungles, where they spent years as guerrillas before the last gave up arms in 1992, others faced what they saw as ethnic discrimination (Montagnards say they were referred to as “moi,” or savages), economic and educational disparities and the loss of traditional farming lands.

In addition, spreading Protestantism mixed evangelism with cultural pride and identity, fueling government suspicion that Montagnard Christianity was linked to political activity — and sparking repeated instances of repression, said Phil Robertson, Human Rights Watch’s deputy director for Asia. Between 2001 and 2008, Montagnards mounted a series of demonstrations over religion and land issues, followed in some cases by crackdowns, Robertson said.

“Because of their history, they’ve been under suspicion and facing continuous harassment,” said Robertson, whose group in June issued a report based on interviews with asylum seekers that documented accounts of ongoing repression. It cited official Vietnamese media reports accusing some Montagnards of religious “evil ways” and politically “autonomous thoughts.”

Yet the case for those seeking asylum based on religious persecution is complicated by a number of factors.

Restricted access to parts of the highlands makes it difficult for journalists or human rights investigators to verify firsthand allegations of religious persecution. Heiner Bielefeldt, a UN Special Rapporteur on freedom of religion or belief, said that during his 2014 visit to Vietnam police intimidated and kept some people from meeting with him, a charge Vietnam has denied.

In addition, at least some Montagnards are fleeing for economic reasons that don’t qualify them for asylum, according to officials with the Jesuit Refugee Service in Cambodia, which is working with the refugees.

More than a dozen Montagnard asylum seekers interviewed recently in Phnom Penh and Bangkok said that they fled provinces such as Gai Lai and Dak Lak because local authorities had subjected them to intimidation and short-term detentions for attending unregistered “house churches,” whose gatherings they broke up. They said they were interrogated about their religious and political activities, and some reported being beaten in custody.

“The authorities of Vietnam think Christian religion is connected to the US, is against the government. But it is not,” said a 40-year-old Montagnard asylum seeker in Phnom Penh, who asked that his name not be used for fear of reprisals. He said he walked for days through the jungle in August to reach Cambodia and is afraid to return home. Now he’s living in a hidden safe house in the city, reluctant to leave for fear he’ll be arrested and deported.

Yet neighboring Cambodia, which HRW’s Robertson said has close ties to Vietnam, has made it clear that Montagnards aren’t welcome there. In April, the Phnom Penh Post reported that nearly 1,000 soldiers were deployed near the Vietnamese border to stop Montagnards crossing. Cambodia has forcibly returned others, according toAmnesty International. And this fall it has refused to grant interviews to most of those seeking refugee status, despite what Robertson said was a legal obligation to do so.

Rmah Ble, a former church leader who came to Thailand via Cambodia in 2011, said Montagnards are able to apply for refugee status with the United Nations in Thailand, where the UN refugee agency UNHCR, not the government as is the case in Cambodia, is responsible for making the determination. Still, waits are long and life is a struggle. He often doesn’t know “where to live, what to eat, and sometimes I cannot work, I’m afraid of arrest.”

He lives packed into a house with 16 other Montagnards, including a 45-year-old rice farmer and church leader who finally fled in January when his wife was detained and beaten. Even after a long wait, advocates said many are denied refugee status, unable to document their persecution.

Ble and others want to be resettled to the United States, where many have relatives. But some have given up waiting and gone back to Vietnam, where Robertson said he did not put much faith in the ability of the US or UNHCR to ensure they aren’t retaliated against upon their return.

Ultimately, Bielefeldt said, pressure on the Montagnard Christians is less about religion than perceived threats to the government.

“So many tourists, coming to Vietnam, they say, ‘Oh my goodness, there are pagodas, there are churches, they’re open, people can worship.’ But not everyone can worship,” he said. “It’s not the old ideological battlefield — religion versus communism. It’s freedom versus control.”