When "The Office" is Wal-Mart: "Superstore" tackles workplace comedy with an eye on the minimum wage 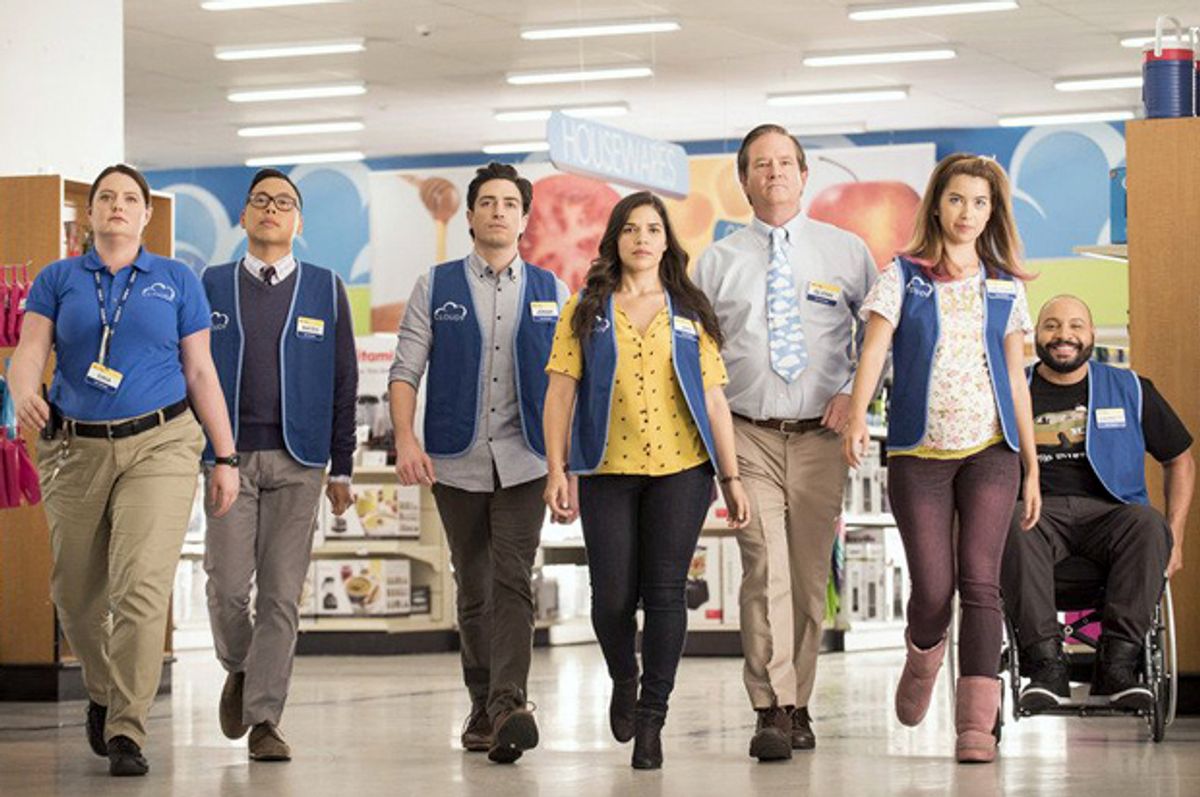 “Superstore,” an upcoming NBC comedy that is airing a sneak peek of its pilot tonight, aims to do something quite difficult: to make the answer to the question “What is it like to work at Wal-Mart?” into a punch line. It’s an inherently political question, one that cuts through both the corporate greed of the megacorporation and the elitism of those who never have to consider taking a (part-time, minimum-wage) job at Wal-Mart in order to make ends meet. And it’s a far sharper question than NBC has been in the habit of making, as the network has struggled to find even the niche success that “Parks and Recreation” and “Community” had before they left the network.

Indeed, what “Superstore” reminds the viewer of most is “The Office,” right from the pilot episode. (Showrunner Justin Spitzer worked on “The Office.”) “Superstore” doesn’t have an analogue to the desperate and narcissistic Michael Scott (Steve Carell), who was the key to “The Office’s" overall brilliance. But it does have a sense of bleak desperation about work—about capitalism, really—and what making ends meet does to people’s souls; it’s a story that has both been told many times and is perennially relevant. St. Louis isn’t Scranton—and from the four episodes I watched, “Superstore” does not seem as committed to the grim void that has replaced the American dream as early episodes of “The Office” were—but the debut sitcom is leaning in the right direction. “Superstore” is a little sleeker and brighter than Dunder-Mifflin, but that makes sense; the fluorescent lights of the megastore make warehouses into cavernous bright mini-communities, where unsightly truths are bleached out of sight. The office of “The Office” wore its considerable flaws on its dirty, well-worn sleeve.

“Superstore” follows the employees of Cloud 9, a store that is so indistinguishable from Wal-Mart that it is, functionally, Wal-Mart. The show costumes the employees with those signature blue vests and striped nametags. A few slight changes here and there keep the lawyers at bay, but this is not the red-and-white, marginally upscale world of Target, or the assemblage-and-meatballs world of IKEA. There are rifles and $8 engagement rings for sale on different ends of the building, in uniquely American fashion; a pregnant 17-year-old employee struggles to stack boxes in a mid-aisle display. This is the combination of ignored exurban America and an insatiable desire for things; the confluence of poor social services, low quality of life and minimum wage. This is Wal-Mart.

“Superstore” keeps its politics backgrounded in the four first-season episodes I saw—including the eighth episode, “Wedding Day Sale”—and instead lets its characters do the ideological bickering. This is showcased with the leads, Amy (America Ferrera) and Jonah (Ben Feldman), who are both more worldly than the rest of their co-workers but also don’t know what to do about it; Amy is all thwarted ambition, while Jonah exhibits a total lack of it, but both are similar for not quite belonging to the environment they’re embedded in. It’s this tension that creates the show’s first dramatic stakes. Jonah, afflicted with chronic foot-in-mouth syndrome—because he’s kind of an asshole—tells Amy that he’s not the kind of person you’d expect to be working at Cloud 9, thinking that she is a random customer. Amy—who, like Ferrera, is Latina—is instantly offended. Jonah, who is that particular kind of thoughtless, jerky “nice guy” who constantly wants to talk about documentaries but can’t pay attention to the world around him, can’t find a way to talk to Amy or most of his other co-workers without sounding condescending. But when he can get out of his own way, he’s smart, optimistic and genuinely interested in the world—all characteristics the Cloud 9 employees are not encouraged to have. The pilot ends with Jonah being able to surprise Amy, which she averred, earlier in the episode, was not possible—and how he surprises her is kind of touching, even if you can see it coming.

Obviously—for anyone who has watched even just one television show—Amy and Jonah’s dynamic will become the show’s primary romantic relationship. Feldman, after he left “Mad Men,” has made a real play for romantic lead roles, and in “Superstore” his cute puppy-dog eyes are so on-the-nose that one of the characters observes he looks like “a panda and a Disney princess had a baby.” And Ferrera, who came on the scene with “Real Women Have Curves” in 2002 and then led the TV series “Ugly Betty,” has struggled for many years to find a role that lets her be both beautiful and adult. As Amy, she is “Superstore’s" conscience and emotional center; she is the one that makes Cloud 9 feel like Wal-Mart, as the place she has worked for a decade slowly saws at her nerves. Jonah is an extremely irritating distraction from the hard work of being a person, because he reminds her of who she wanted to be, many years ago. There is a lot to say, in “Superstore,” about class and code-switching and who succeeds in American corporate culture; what is smartest of all about the show, though, is that it is restrained enough to let its characters say those things. Both Amy and Jonah are extremely aware of their class, education and background differences; so aware, that it sometimes doesn’t even need to be said at all.

It’s not just them, though; if anything, because Amy and Jonah are more complex characters, it takes a while for the audience to warm up to them. Ferrera is cold and standoffish and Feldman is so smart-alecky he’s almost snotty. But that’s when the rest of “Superstore” comes into play—including Colton Dunn, Mark McKinney and Lauren Ash, who has been quietly killing it in ensemble parts for the last few years. All three are far more settled characters, and so they deliver most of the show’s punch lines. The show could certainly stand to find some more rhythm to its comedy, as it hammers out the right tone for the tricky comedy of minimum-wage Middle America. It’s neither the wildly confident (and brilliant) “Carmichael Show” nor the wildly predictable (and bad) “Undateable,” both on the same network. But even its raw edges and sticking points are appealing; there’s something catching about “Superstore,” on a network that has for too long been invested in delivering smooth, glitzy and easily digestible shows that leave no impression at all on its viewers.