America’s gun insanity is crazier than you think: Our delusional era of everyday mass shootings — and record low crime rates

Yes, there's a mass shootings epidemic—and violent crime is near a historic low. Only in America! 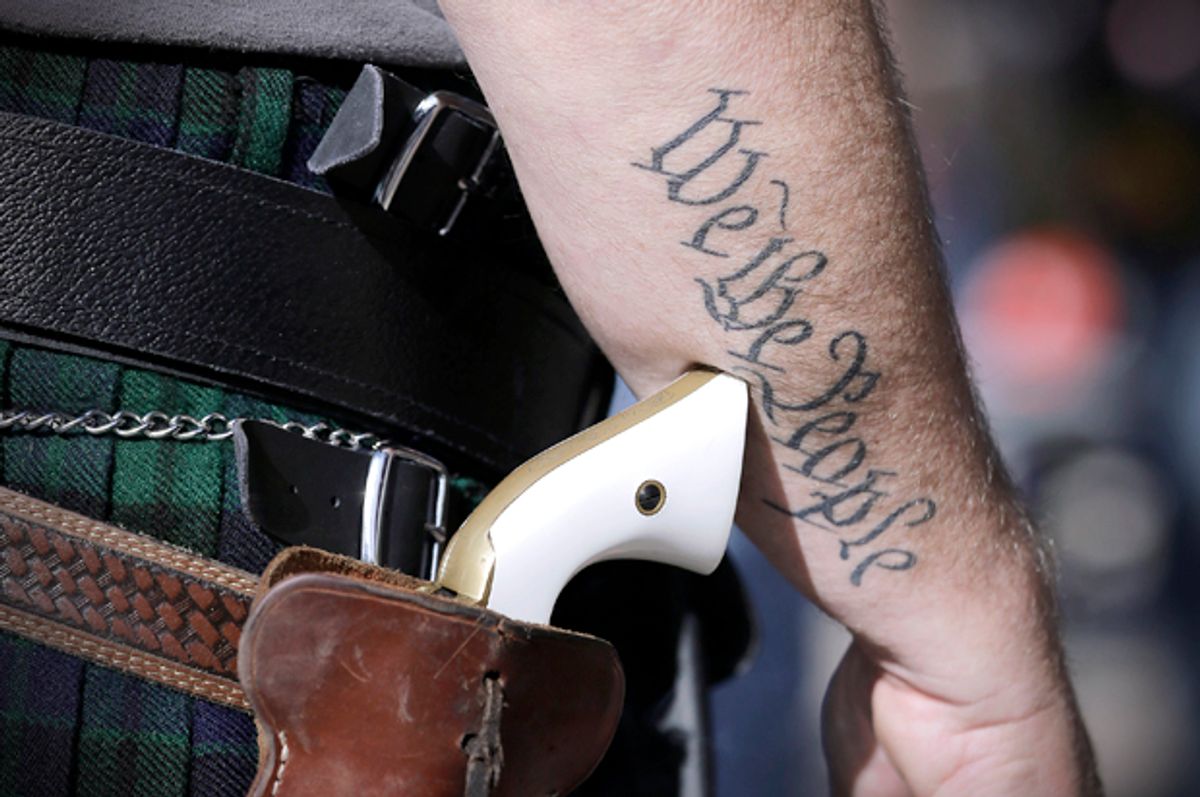 I have avoided writing about America’s gun insanity the last several times it has erupted into the headlines. There are certainly things to say, and I’m grateful to those who keep on saying them. But honestly, what’s the point? The pain and despair repeat themselves over and over, without ever producing the desired moment of crisis and catharsis, let alone change or redemption. It’s like being trapped in an endlessly recursive bad dream, without ever waking up.

Insanity is not just a metaphor in this case. It appears to describe the actual situation. People die in some mass shooting staged for maximum spectacle — schoolchildren die, healthcare workers die, TV reporters die, sorority girls die; it’s hard to keep up — and we walk through our meaningless ritual of lamentation, without quite telling ourselves the truth about what is happening and with little or no belief that anything will be done to prevent the next one and the one after that.

Perverse as the comparison may seem, America’s gun problem has something in common with the Israeli-Palestinian standoff that has produced a similar level of blood and tears. In both cases we are obligated to pretend that some breakthrough that will change everything lies just beyond the horizon, while privately feeling sure that horizon will never be reached. In both cases, things probably have to get worse – a lot worse – before they will get better. In both cases, Mitt Romney’s famous canard about kicking the can down the road (even though Romney did not actually say that) offers the ultimate realpolitik policy option.

And here’s another parallel, which will sound deeply illogical at first: In both cases, the problem is not necessarily that we are trapped in a worsening cycle of violence as that we are trapped in a worsening narrative or spectacle of violence. Shocking events like the San Bernardino shooting or the Planned Parenthood shooting or the Charleston church shooting reinforce that narrative, and make it appear impossible to escape. It’s a narrative that fuels ghastly and addictive media images and contradictory political agendas, which is why it’s so powerful and so difficult to resist. But that doesn’t make it true.

After each new outrage, President Obama makes his customary mournful utterance about how other major Western nations don’t have these kinds of shootings on anything close to the American scale (which is perfectly true), while knowing perfectly well that nothing whatever will be done to address the situation during his last year in office. Republican politicians, whose souls have been sucked from their bodies and replaced by National Rifle Association talking points, manifest the symptoms of gun insanity in their most obvious and offensive form. They pull long faces and tell us that prayer is more effective than gun control and that if only teachers and medical providers and social-service workers and, I don’t know, line cooks at Pizza Hut were all strapping Glocks, this issue would take care of itself. In the case of the San Bernardino shooting this week, we then get the level of meta-madness in which right-wingers are openly gleeful that the shooter appears to have been a Muslim, and may (or may not) have been motivated by some degree of religious zealotry.

I suppose the zombies and ghouls of the 21st-century Republican Party have a point, in ass-backwards fashion: If our entire nation of 300 million-odd people was conducted like Dodge City, where every public disagreement or altercation risked becoming an all-hands shootout out of a Tarantino movie, social life would certainly have a different character. This is where Wednesday’s Los Angeles Times editorial arguing that we seem to have a conscious or half-conscious national death wish comes in (I’ve held that view for years), not to mention Nicholas Kristof’s startling observation that Ronald Reagan once made a White House speech arguing for moderate gun-control regulations that might reduce the alarming rate of firearm homicides. Today’s GOP has left its supposed revolutionary hero far behind, and embraced a platform built on death. It draws ever closer to the all-encompassing position of Cthulhu, the Lovecraftian Elder God turned presidential candidate: #NoLivesMatter.

But it isn’t just the Republicans who have been driven into full-bore, Hannibal Lecter-grade batshit insanity by the gun issue. Arguably the whole country is crazy, and even the facts about gun violence seem crazy, or at least deeply paradoxical. Moreover, liberals and conservatives are almost equally guilty of distorting or ignoring the perplexing evidence to fit their own perceptions of the world or their political agendas, which is not to say that the consequences of these distortions are equivalent. Broadly speaking, Republicans want two blatantly contradictory things to be true: They want violent crime rates to go down in order to prove that widespread gun ownership has beneficial effects, and want them to go up in order to prove that people of color are spreading mayhem in the cities while Black Lives Matter protesters terrorize the cops into inaction. So conservative think tanks labor to correlate the long-term decrease in crime with concealed-carry laws, while the right-wing media spreads anecdotal panic with every micro-uptick in urban crime.

If the liberal agenda is less overtly mendacious and has more rational goals – Reagan was quite right to observe that even a 10 percent decrease in gun murders means 1,000 Americans a year who are alive rather than dead – that doesn’t make it entirely honest. I support gun control. Every major Western industrial nation limits and regulates the ownership of handguns and military-style weapons, and it’s not coincidental that they all have drastically lower murder rates than the United States. The authors of the disastrously awkward Second Amendment were thinking about farm households with a musket behind the front door and a shotgun above the hearth; it’s ludicrous for anyone to pretend that they meant to grant an unlimited right to own military-style weapons whose sole purpose is to kill large numbers of human beings.

But it doesn’t help the cause of gun control for its advocates to ignore or deny the strange but undeniable fact that gun violence has declined significantly in the United States, even during a period when we have had virtually no effective gun control. And it hasn’t declined by just a little, either. Mass shootings — a special variety of gun violence, orchestrated for maximum media effect and maximum panic — barely existed before the 1970s, and have clearly increased both in absolute terms and in terms of cultural prominence. But overall, gun-related deaths in the U.S. have fallen by nearly one-third since hitting a postwar peak in 1993.

This is an inconvenient fact that doesn’t precisely suit anyone’s political agenda, and as a result almost no one believes it. It simply doesn’t feel true, because we are all locked into a narrative that things are always and invariably getting worse. I had to haul out FBI statistics to convince my older brother of this last Thanksgiving, and I had to do it again this year. I’m pretty sure he still thinks I’m making it all up. I spent part of Wednesday evening flinging numbers at some guy on Twitter who found this inconceivable, and suggested that the stats had been cooked in some widespread government cover-up. He and my brother are not alone. As a Pew Research study published in October reports, 56 percent of Americans polled in 2013 said they believed gun violence had increased over the last 20 years, while another 26 percent said it had remained about the same. Only 12 percent perceived, correctly, that gun crimes had declined.

It appears likely or probable that in 2014 and 2015 we have seen a slight upsurge in urban crime (feeding Republican paranoia) along with an obvious wave of mass shootings, largely but not exclusively carried out by the stereotypical white male loners (and thereby feeding liberal outrage). Every gun murder should be viewed as a preventable tragedy, of course, and every mass shooting stands as a profound indictment of our national obsession with violent fantasy and our narcissistic tendency to confuse spectacle and reality. Our murder rate remains three to four times higher than those found in generally similar multicultural democracies like Britain, Canada or France, and I’m not saying that should be viewed as an acceptable standard.

But the perception shared by all sides that gun violence is worse than ever before, whether we blame that inexorable worse-ness on black gangsters in baggy pants or white nutjobs in dad pants, is itself a symptom of our widespread national delusion. In fact, the numbers for 2013 (the most recent for which FBI data is available), provide a murder rate of 4.5 deaths per 100,000 people — the lowest since 1957. Yes, I said Nineteen hundred and fifty-seven, the year Dwight Eisenhower sent federal troops to desegregate the schools in Little Rock and the year Elvis Presley bought Graceland and the year the Brooklyn Dodgers moved to Los Angeles. In that impossibly distant era, we had approximately the same murder rate we have right now. What political consequences derive from facing that improbable fact? I have no idea, but setting ourselves free from any aspect of the paranoid thinking and collective powerlessness that define so much of American life is a pretty good start.