The genius of "Tusk": Fleetwood Mac could have followed "Rumours" with more of the same — but they made this visionary masterpiece instead 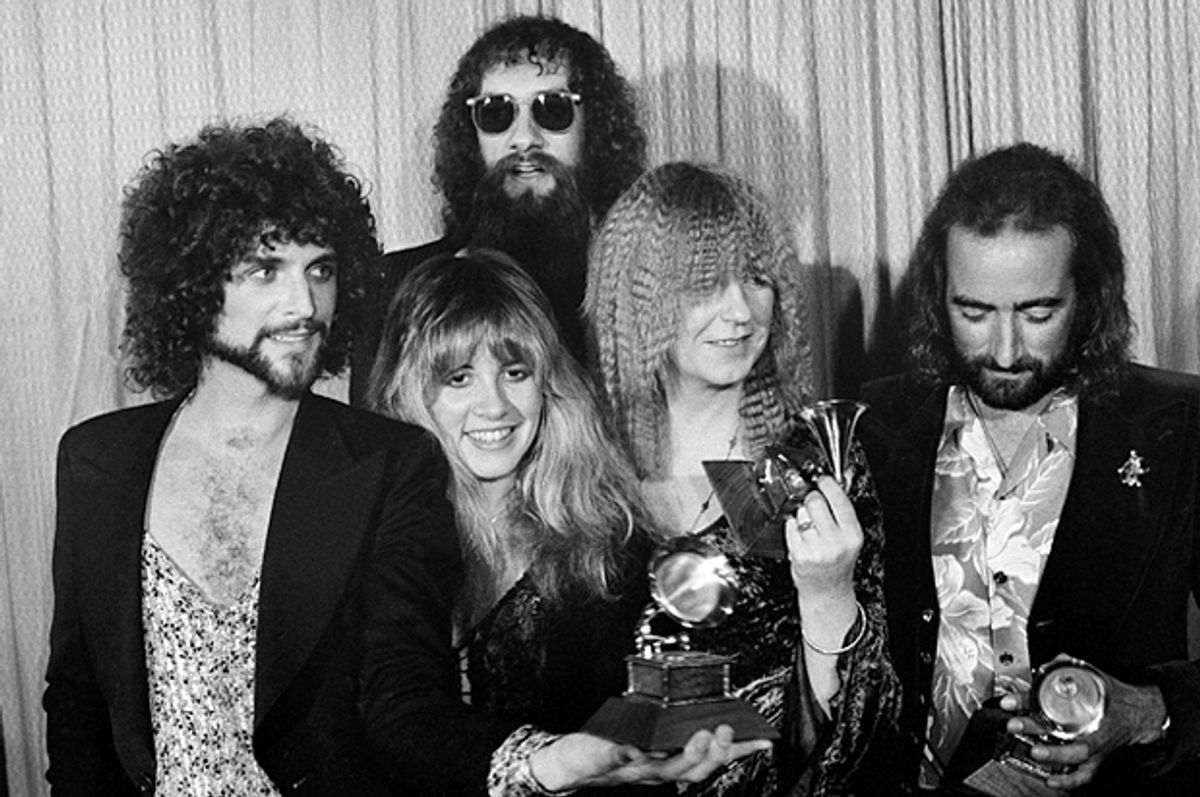 Evidence exists proving Fleetwood Mac could have followed-up "Rumours" with something similar had the spirit moved them, instead of the alienating departure of the double album called "Tusk" that they did make as the follow-up to one of the most universally appealing albums ever.

When singer-guitarist-producer Lindsey Buckingham wasn't making like a lo-fi indie rocker from the future playing in Brian Wilson's sandbox on "Tusk," Stevie Nicks and Christine McVie were singing songs that sounded like the Fleetwood Mac the world knew and loved — songs like "Sara," "Think About Me," "Over and Over," "Sisters of the Moon," "Never Forget" and "Angel."

There's further evidence sprinkled among the many demos and alternate takes featured on an expansive new “Tusk” box set Rhino Records just released, and unreleased “Tusk”-era tracks out there in the digital ether like Nicks's "The Dealer," which she re-recorded for her 2014 solo album “24 Karat Gold: Songs From the Vault.” "That's Alright," a beautiful country shuffle dating back to the Buckingham-Nicks days that ended up on 1982's "Mirage" could have been folded neatly into this batch of songs. Mix those tunes in with some of the least-threatening Lindsey stuff from "Tusk," like "Save Me a Place," "I Know I'm Not Wrong" and "That's Enough for Me" and you've got yourself a follow-up that doesn't stray too far from the “Rumours” formula — one that could be squeezed onto two sides of vinyl as opposed to four by tightening up the fade-outs on a few tunes. Think something along these lines:

This "Rumours II" scenario seems commercial enough, with a pretty equitable balance of Stevie's mystique, Christine's hopefulness and Lindsey's intensity. All the familiar pieces are in place: the songs contain the requisite three-part harmonies, plenty of Lindsey's sick fingerpicking and those hypnotic grooves from Mick Fleetwood and John McVie. And you know co-producers/co-engineers Richard Dashut and Ken Caillat could have dialed in that warm sonic glow they achieved on “Rumours.”

But there's a significant void. The emotional lightning of two in-house romances simultaneously crumbling, which sparked the fire in "Rumours" songs like “Dreams,” “Go Your Own Way,” “The Chain,” “Never Going Back Again” and “Gold Dust Woman,” couldn’t strike twice. An attempt to repeat the "Rumours" formula without that kind of fire down below would’ve resulted in a hollow imitation. Maybe they sell an extra million or two records in the short term by making the follow-up a single, safer kind of album. Ultimately it would've rendered Fleetwood Mac just another big '70s rock commodity that liked to stick to the script, like the Eagles, Peter Frampton or Boston.

So rather than following the path of least resistance, Fleetwood Mac took the most radical left turn a huge band has ever taken at the peak of its commercial and artistic powers. With Lindsey Buckingham hogging the ball, they spent $1.4 million in 1978-79 dollars making the most punk rock soft rock album ever in "Tusk." Next to making “Rumours” (and also the band hiring Lindsey and Stevie after Bob Welch left), letting Buckingham take the lead on "Tusk" was the best career move Fleetwood Mac ever made, though it would take years for its impact to be measured accurately.

Once people started recognizing “Tusk” as the enduring masterpiece that it is, it began to serve as a gateway for evaluating Fleetwood Mac from another perspective. It proved there was more to Fleetwood Mac than just "Rumours" and a bunch of other classic rock radio staples; that they weren't just a pretty cool band you could share with your mom and dad or older brother or sister. “Tusk” showed Fleetwood Mac were also a risk-taking bunch, artists of great depth and integrity. A younger generation of cutting edge artists including Peter Buck, Trent Reznor, Stephin Merritt of Magnetic Fields, Joanna Newsom and Kurt Vile, to name just a handful, have championed the album over the years — Buckingham's work on it in particular. Other musicians have taken things a step further, by forming groups to cover "Tusk" (and other Mac tunes) live. Mick Fleetwood, in his 1990 autobiography, basically said Fleetwood Mac needed to make “Tusk” if they had any hopes of continuing: "It's a great album and probably the only reason Fleetwood Mac is still together today ... it released a lot of creative frustrations."

That was not a widely held view when "Tusk" was released in October 1979. To the millions of jilted fans — along with Warner Bros. Records executives and some members of the band — that didn’t hear anything as immediately satisfying as “Dreams” or “Go Your Own Way” among Tusk’s 20 songs, it seemed as if Buckingham had steered this very expensive, high-performing vehicle into a ditch. But time has shown Buckingham steered the band exactly where it needed to go if it hoped to remain relevant in the long term, steering them away from that '70s FM rock comfort zone into a passing lane where new influences like the Talking Heads and the Clash informed his Elvis/Beach Boys/Everlys roots. As a songwriter, he found a link between David Byrne and Buddy Holly and milked it to manic effect on songs like "Not That Funny" and "The Ledge." As a producer, he stripped away familiar elements from songs, favoring raw process over the perfection of "Rumours."

Christine's spare and heartbreaking "Never Make Me Cry" features the solitary strum of reverb-y electric guitar; it's not dressed up with a stately grand piano tracked in a concert hall a la "Songbird." The longing in Stevie's "Storms" is anchored by the muted pulse of a kick drum, electric piano and a delicate weave of electric guitars — no traces of dainty "Landslide"-isms here. Lindsey's own "That's Enough For Me" plays like "Second Hand News" at warp speed and feels like a purely solo exercise — just Lindsey's double-tracked vocal, a few tracks of frantic guitar picking and a stomping drum track. It's telling to note the subtle changes from the demos of these songs featured on the new box set to the finished versions: The shifts aren't drastic but they're crucial, as if Buckingham is trying to scrub away any scent of "Rumours." With a heavier hand on the drums and acoustic guitar up in the mix in one demo version of “Storms,” it feels like the band is trying to figure out how to make the song sound like Fleetwood Mac. In a demo version of "Never Make Me Cry," Christine's on piano and trying to sell the vocal just a little bit harder. It's beautiful — it's Christine Fucking McVie singing, how on earth can it not be beautiful? — but it’s a shade too familiar. The demo of "That's Enough For Me" (titled "Out on the Road") is fleshed out with a harmony vocal from Stevie and piano — definitely been there, done that territory.

This was a band that had to re-invent itself to varying degrees several times due to membership changes. Here they did it again, but for different reasons. In many ways, Fleetwood Mac had become the embodiment of '70s rock (still are, really) and it's as if Lindsey's did all he could to drag the band into the '80s ahead of schedule. A lot of people just weren't ready for it. Opening the album with Christine’s dreamy “Over and Over” drifting into Lindsey’s harsh two-step “The Ledge” certainly was not a segue that went down easy, like “Second Hand News” into “Dreams.” Those pristine snare drum sounds that felt like liquid gold flowing from stereo speakers being replaced on some songs by what sounded like a sack of loose change hitting a phone book and Lindsey playing a box of reel-to-reel tape with his hands surely gave radio programmers pause. And can we be certain that Mick Fleetwood is, in fact, playing the same song as the rest of the band (i.e. Buckingham playing everything) on “What Makes You Think You’re the One”?

If there's one song that best represents the departure and experimentation at the core of “Tusk,” it's the title track. Thirty-six years after its release, it can still prompt the listener to wonder what the fuck it was they just heard as Buckingham's symphony of marching band brass and woodwinds, jungle-drum rhythms, grunting, chanting, barking vocals and gnarly guitars fades to black after a chaotic three minutes and thirty-seven seconds. Where the Eagles teased their big follow-up to "Hotel California," "The Long Run," with the yacht R & B of “Heartache Tonight” in September 1979, Fleetwood Mac introduced its big follow-up that very same month with what is perhaps the strangest song to ever reach the Top 10 on Billboard’s Hot 100 singles chart. In a year where disco and Styx and the Knack and "The Pina Colada Song" were all over the radio, "Tusk"  reached number 8. That's how hungry people were for new Fleetwood Mac music.

Fleetwood Mac eventually got around to making “Rumours II,” in a sense. In the wake of “Tusk”’s relative commercial flameout (selling “only” four million copies domestically, to “Rumours’” 20 million) the follow-up “Mirage” felt like a calculated return to the comforting creative bosom of “Rumours.” The album's 12 songs are pleasing enough (with a few Mac classics like "Hold Me," "Gypsy" and "Oh Diane" highlighting the collection) but on the whole it feels more deliberately cohesive than it does inspired. It’s the anti-”Tusk.” And time has shown the anti-”Rumours” to have left a much greater impact on the band’s legacy.