Tyson Fury is a champion and a loser

The controversial boxer stands by his homophobic, sexist comments 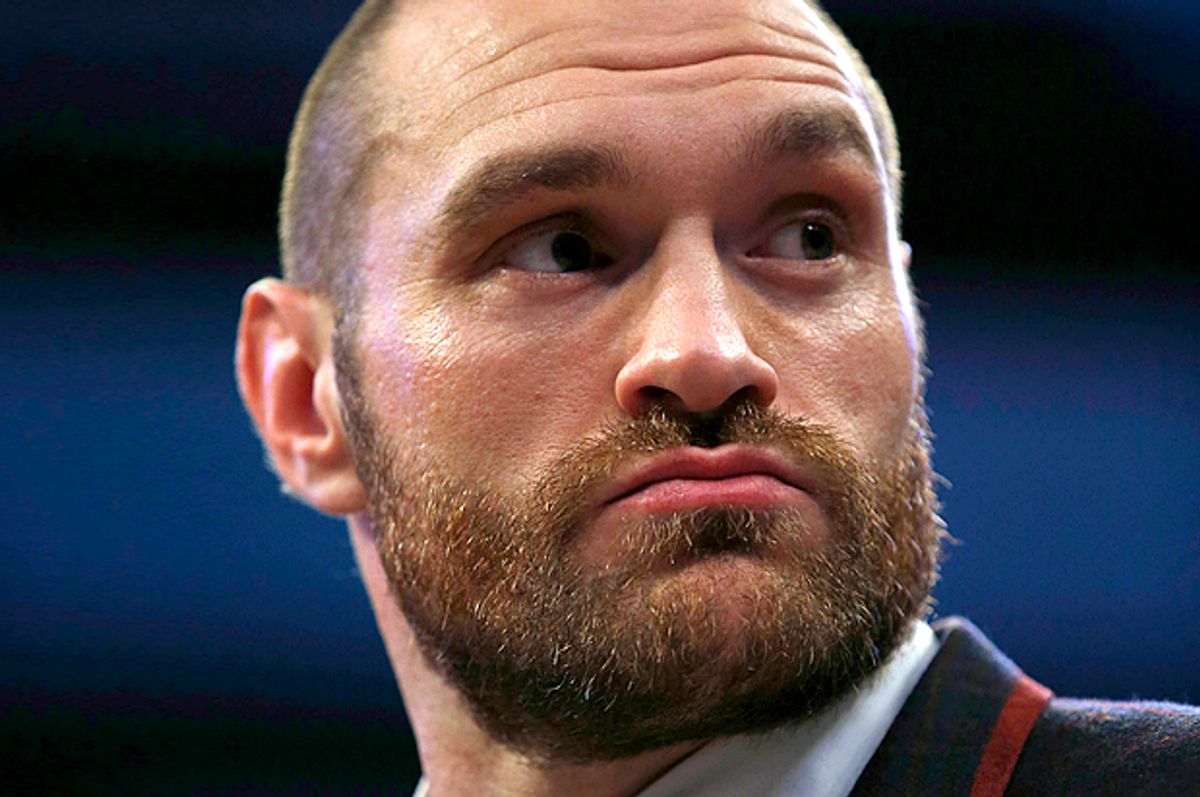 In an era of terribly offensive statements followed by insincere shows contrition, it's so refreshing to have someone like Tyson Fury on the scene. Because Tyson Fury is one unrepentant, hateful jackass. And I feel fine saying that because Fury doesn't care.

One can understand how the 27 year-old British boxer, who in November was crowned heavyweight champion of the world, would seem a natural to find on the BBC Sports Personality of the Year's 2015 shortlist. It's not Fury's unquestionable athletic aptitude that's the reason that over 80 thousand people have already signed a change.org petition asking the BBC to reconsider his place on the list. It's his mouth.

In an interview last month with the Mail on Sunday's Oliver Holt, he claimed, "I believe the end is near. The bible tells me the end is near." He then went on to explain what he believes "needs to be accomplished before the Devil comes home... One of them is homosexuality being legal in countries, one of them is abortion and the other is pedophilia. So who would have thought in the 50s and early 60s that those first two would be legalized? When I say pedophiles can be made legal, that sounds like crazy talk doesn’t it? But back in the 50s and early 60s, for them first two to be made legal would have been looked on as a crazy man again."

Tyson then followed up the interview by claiming the piece was "all misquotes," calling the reporter a "wankstain" and threatening to have a colleague "break his jaw completely with one straight right hand." Charming. So precisely what someone who says "I follow Jesus" would say. And just to be clear on how he still feels, on Sunday he posted on his Twitter feed a message to his haters: a video of two bros singing, "Go suck a d__k," an apparent reiteration of his message, during a recent iFL TV interview, "They can't knock my achievement, can they? I beat the man who nobody could beat. Until somebody can go in and beat him again, they can s__k my b__ls, how about that for a bit of heavyweight champion talking?" I'd say it's odd, coming from a man who also says, "Tyson Fury loves his fellow humans. He doesn't hate anybody."

As so often is the case, Fury's not a single issue jerk. He's also said of his fellow BBC nominee Jessica Ennis-Hill, "That’s the runner, isn’t it? She’s good, she’s won quite a few medals for Great Britain. She slaps up good as well. When she’s got a dress on she looks quite fit." And speaking about females in the ring, he's declared, "I think they are very nice when they're walking around that ring holding them cards. I like them actually; they give me inspiration when I'm tired and I see them wiggling around with their Round 2, Round 8. I think women in boxing is very good." He added, "It's up to everybody what they want to do. I'm all for it; I'm not a sexist. I believe if a man should to go work all his life a woman can… Who am I to say 'Don't do that 'cause you're a girl?' But I believe a woman's best place is in the kitchen and on her back. That's my personal belief. Making me a good cup of tea -- that's what I believe."

As soon as his comments began to arouse questions about his qualifications to be reigning sports figure of the year, Fury took to Twitter to say "Just to recap, I stick by anything I've said in the past, 10000% being the heavyweight champion makes no difference to me, I'm a roll model." [sic] Which is funny considering that until the Mail published the transcript of his homophobic interview, he was not sticking what he'd said at all.

Fury now facetiously claims he doesn't care about the BBC list, explaining, "I'm not the best roll [sic] model in the world for the kids, give it to someone who would appreciate it." A BBC spokesperson, meanwhile, has explained the decision to add Fury to the shortlist by saying his presence on it is "not an endorsement of an individual’s personal beliefs" and that "The Sports Personality shortlist is compiled by a panel of industry experts and is based on an individual’s sporting achievement." But winning boxing matches does not make someone the best sports personality of the year. And it's clear from his recent deluge of offensive commentary that while he knows how to fight, he has no idea — in every possible sense — what it means to be a role model.