Is France going fascist? Extreme-right National Front is now the most popular party 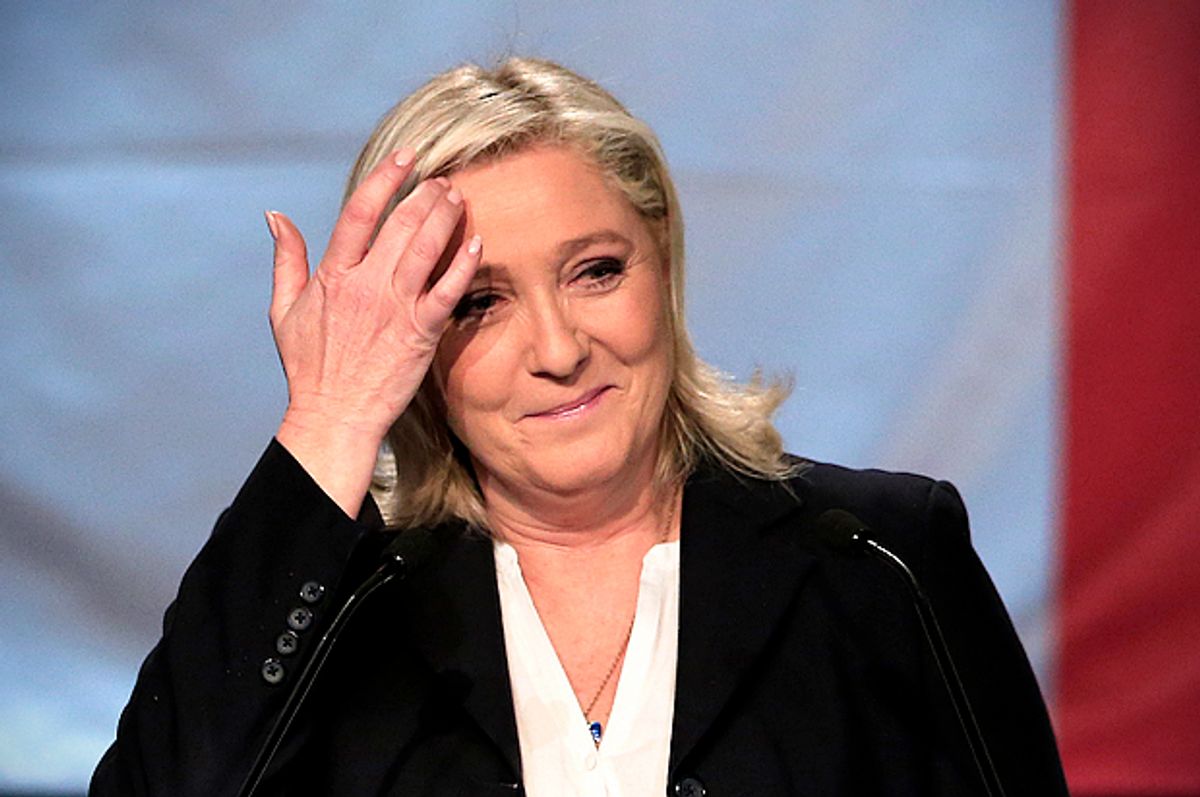 The most popular party in France today was founded by a neo-fascist Holocaust denier.

In the first round of the regional elections on December 6, the extreme-right National Front (FN) came out on top, with 28 percent of the vote. Following closely in second place, with 27 percent, were The Republicans (LR) -- the center-right party, formerly known as the Union for a Popular Movement (UMP), led by ex-President Nicolas Sarkozy. The ruling Socialist Party (PS) came in third, with 23 percent.

FN leader Marine Le Pen said the results proved the far-right party was "without contest the first party of France."

The National Front runs on a harshly anti-immigrant and anti-Muslim platform. Le Pen, who vociferously opposes France providing asylum to Middle Eastern refugees, wants to reduce immigration by 2,000 percent and make it much more difficult for migrants already in the country to attain citizenship. The FN says it has zero tolerance for undocumented immigrants, and hopes to ban dual nationality for non-Europeans. The far-right party also wants priority to be given to French citizens over foreigners for jobs and social programs.

Since the January and November Paris attacks, the latter for which ISIS claimed responsibility, the National Front has rapidly grown in popularity. The extreme-right party has capitalized upon the incidents, portraying them as confirmation of its narrative that Muslims, and even the religion of Islam itself, have supposedly declared war upon the West.

The party has employed such xenophobic, right-wing populist rhetoric for years. In 2010, Le Pen compared French Muslims praying in the street to Nazis in German-occupied Vichy France. The irony of this comparison is that the founder of the National Front, Marine's father Jean-Marie Le Pen, is himself a Holocaust denier with ties to neo-Nazi groups.

In 2008, Jean-Marie was found guilty of Holocaust denial, which is a crime in many European countries. Jean-Marie, still to this day, insists that the Nazi gas chambers were a mere "detail of history." He has also defended French Nazi collaborators, and early members of his FN were former collaborators. According to the FN founder, the Nazi occupation of France -- under which Jews, communists, and the mentally ill were executed -- was "not particularly inhuman."

During the 2012 presidential campaign, French socialist politician Jean-Luc Mélenchon called Le Pen and her party fascist. She subsequently sued him for defamation, yet a French court ruled in 2014 that it is indeed appropriate to call Le Pen and the National Front "fascist."

FN supporters often chant slogans like "France to the French." In court, a National Front supporter referred to foreign-born French citizens as "dogs" and "barbarians."

In the past few years, with the influx of refugees from the Middle East and the rise of ISIS, Le Pen's party has continued to demonize immigrants and Muslims as enemies of French secularism. France has a long and proud history of laïcité (secularism), going back more than a century. Although the FN uses laïcité when it is to its political advantage, however, the far-right party has not been consistent.

Marion Le Pen, another leading figure in the extreme-right party -- and a granddaughter of Jean-Marie and niece of Marine -- has characterized France as a Christian nation, and even gone so far as to insist that Muslims "cannot have exactly the same rank" as Catholics in society.

"France is not a land of Islam," Marion maintains. "Therefore, it was normal that we demand that they conform to a lifestyle, to values, shaped, among others, by centuries of Christianity." It is hence "normal, given that the dominant culture is pervaded by Catholicism, that the place of this religion in the public is more important," the FN Member of Parliament says.

Marine has distanced herself from her father and his extremist ties. She threatened to sue individuals and groups who call the party "extreme," yet the media regularly continues to do so. To steer clear of her father's virulent anti-Semitism, Le Pen asked Jewish organizations to join in an an-Islam coalition with other far-right European parties.

Re-branding the neo-fascist movement has been one of Le Pen's primary goals. She even expelled her father from the party, along with other members with links to Nazi groups. But, although she has tried to give the National Front a makeover, the party is still decidedly far-right.

Le Pen has called for the reestablishment of the death penalty, which was abolished by the Socialist Party in 1981.

FN founder Jean-Marie Le Pen was infamous for using gendered language to paint Muslims and immigrants as a threat to native-born French women. "These immigrants tomorrow will sleep with your wife and your daughter," he told xenophobic voters, warning that Islam "slowly penetrates Europe."

Marine has cooled off this overtly racist rhetoric, but the National Front has maintained some of its founders positions on women's rights issues. Jean-Marie controversially called France's liberal abortion laws "official anti-French genocide," and ironically compared it to the Auschwitz crematorium -- the cruelty of which he simultaneously downplays. Although the FN no longer uses such extreme rhetoric, many of its members, including Marion, oppose abortion rights.

In fact, at the same moment that the National Front accuses Muslims and Middle Eastern immigrants of being patriarchal, the far-right party calls for the de-funding of France's equivalent of Planned Parenthood and restriction on women's access to abortion.

In the U.S., all of these positions may sound like those of the Republican Party, but this is because U.S. politics is inordinately far to the right. In much of the world, and in Europe in particular, these views are extreme. Indian-American historian Vijay Prashad has remarked, "If the Democratic Party were in any other country in the world, it would be considered a party of the far right." The GOP is practically off of the spectrum of mainstream parties.

The National Front, however, the party that now appears to be in the forefront of French politics, is catching up, and may push France far to the right -- and bring Europe along with it in the process.