Trump's dark victory: Even Republicans are speaking out against the Donald's hateful Mussolini parody. But can the damage be undone?

Yes, it's time to use the F-word, and to stand against tyranny and hate. But the problem goes way beyond Trump 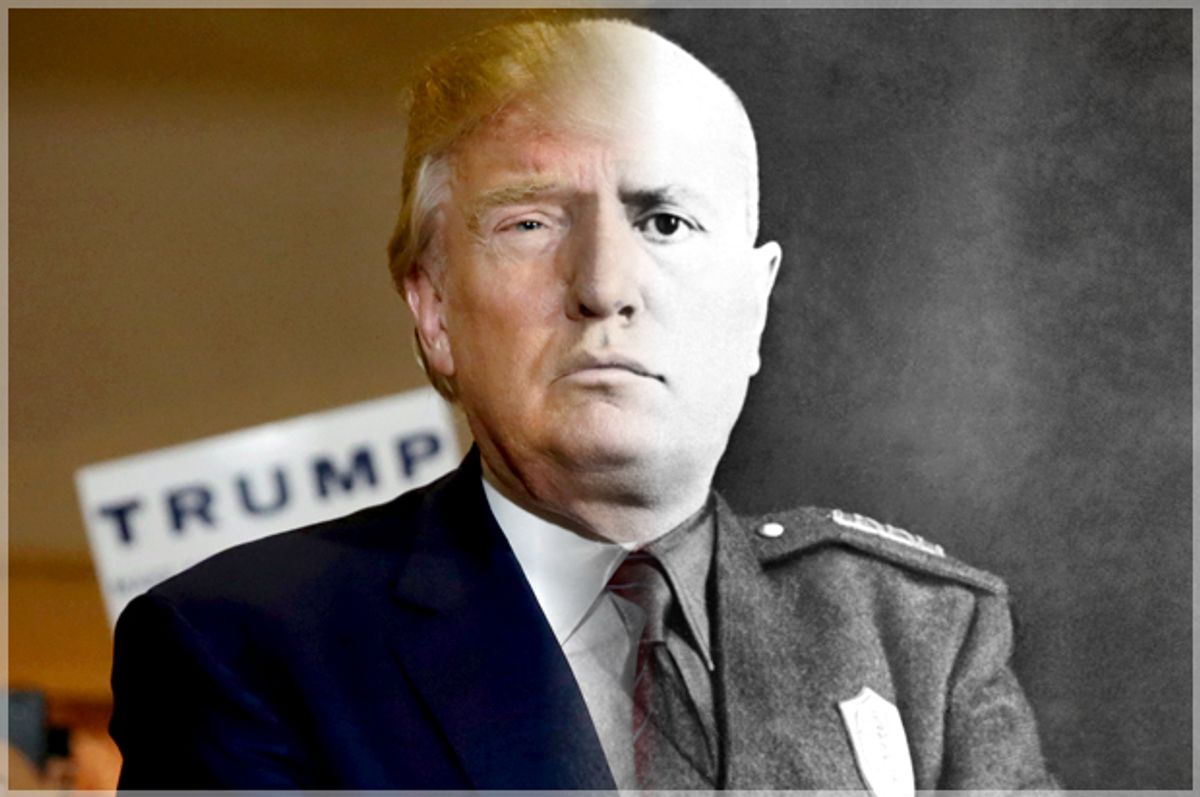 It is time, brothers and sisters, to haul out the clichés, because for once they are not unwarranted. For most of my adult lifetime, which extends well back into the 20th century, people on the American left have been complaining about the slow march toward fascism. Now we have reached the day when such expressions no longer feel like metaphorical overkill.

When a purportedly major presidential candidate, leading in the polls less than two months before the first votes are cast, proposes that we keep people out of the country based entirely on their religion – well, it feels like apocalyptic science-fiction, as if we were all living inside “The Man in the High Castle,” but I can only conclude that the moment to stand up and be counted is upon us. This is the moment to draw a line in the political sand and the moment to observe that it can happen here. It’s the moment to ask yourself whose side you’re on, and the moment to observe that those who would sacrifice essential liberty for the sake of temporary safety will get neither. Would you have spoken out in Germany in 1933, or 1936, or 1939, risking your own safety and that of your family, or would you have kept on going with your head down? It is time for those questions too, and also for the one that U.S. Army chief counsel Joseph N. Welch famously asked Sen. Joseph McCarthy in 1954: “Have you no sense of decency, sir, at long last?”

We don’t have to ask that question about Donald Trump, whose chief selling point has been his thoroughgoing lack of decency, along with his complete disconnection from political reality, legal plausibility and rational discourse. But all those questions apply with bitter and urgent relevance, however, to the rest of us. Trump, c’est nous -- or at least it is we who have created him and enabled his outrages. Now we face Victor Frankenstein’s problem: Having unleashed evil upon the world, largely because we wanted to see what would happen, how do we unmake the monster or undo his deeds? Win or lose, as Heather Digby Parton has noted, Trump has left his reeking polecat stench on American politics. From now on, the wholesale deportation of immigrants, or the exclusion and persecution of adherents to a particular faith, are mainstream political positions and not just the province of white supremacists with weird beards and multicolored Geocities-style websites.

Trump dropped his latest xenophobic bombshell on Monday, quite likely in response to a dip in his Iowa poll numbers, by suggesting that all Muslims should be barred from entering the United States “until we get ahold of what’s going on.” Here’s one thing that’s going on: We should not dignify such a blatantly unconstitutional piece of rhetorical pandering by calling it a “proposal” or even an “idea.” It’s more like a masturbatory fantasy for the disempowered Trumpian demographic, a little blue pill of super-concentrated hate that will take us back to a magic land of full employment for white people, where campus radicals and transgender people will disappear and black lives demonstrably do not matter.

Has Trump finally gone too far? Well, by now we ought to understand that’s a stupid question. His job is to go too far, and to drag the rest of us along with him, inch by inch. Everyone who wants to be seen as respectable in politics and media and any other arena of public life has backed away from Trump’s latest policy brain-fart in pearl-clutching horror, including most but not quite all of the other Republican presidential candidates. That’s better than hearing people agree with him, I guess, and it’s somewhat reassuring to discover that even in this year of upside-down politics there are things that still strike almost everyone as beyond the pale. But in some cases you have to be surprised that the words of shock and dismay didn’t curdle on their lips, or that the phrases of righteous indignation didn’t turn into scorpions and sting their utterers to death on the way out.

When Chris Christie has argued that not even 5-year-old children from Syria should be admitted to the United States as refugees, and Jeb Bush has suggested that we should admit only those refugees who happen to be Christians, and Marco Rubio has argued whatever version of the no-refugees position he has been told puts him slightly to the right of Bush and slightly to the left of Trump and Ted Cruz, what possible right do those craven and spineless hypocrites, those mollusks of the shifting ideological tides, have to object to Trump pushing those ideas toward their logical extreme? Without even considering the 24/7 Father Coughlin-style demagoguery of Fox News, which has been spreading indiscriminate anti-Muslim hatred for the last 14 years, what right do Joe Scarborough or Chris Matthews or the false-equivalence talking heads of CNN have to pull long faces and announce that this, at last, is unacceptable and un-American, whereas all the crazy stuff we were talking about yesterday was totally fine?

For that matter, what right do the sober and serious “liberal” critics of Islam, in the mold of Sam Harris and Bill Maher, have to protest today that they despise everything Trump stands for and reject his noxious views? Quite simply, they don’t. It is entirely valid for Westerners to observe that there is a serious internal conflict within Islam, and that a zealous minority within the Muslim world is seeking to drive the faith toward increasing intolerance and apocalyptic violence. But Maher and Harris have been pushing a subtler and more sophisticated version of the Trump line on Islam for more than a decade: Muslims en masse present a threat to Western civilization; many of them covertly support terrorist violence or do nothing to prevent it; Islam is ideologically incompatible with pluralist democracy. Once you accept all that, why the hell wouldn’t you support Trump’s plan? Because its symbolism is overly crude, or because its author is so clearly psyched about shredding the Constitution?

Cable TV and social media and the amphetamine-fueled mania of the news cycle have nurtured and fed Donald Trump all along – he isn’t the first politician to be a celebrity first, but he’s the first to have been a reality TV star before he was a candidate – and has delighted in the fact that it couldn’t quite control him or predict what he would do next. As Trump and Roger Ailes were both clearly aware, their semi-manufactured feud was beneficial for both of their brands and for the ultimate cause they both serve, which has a scary name I will try to avoid saying again, lest sensitive readers get the vapors. (F-word trigger warning!) For now let’s just call it “replacing our screwed-up political system with something awesome.”

From the beginning of his campaign, Trump has served as the release valve for the Republican Id, saying things that we all know many “base voters” and “ordinary Americans” are thinking – you don’t need me to decode those terms, I imagine -- but that the party’s “establishment” candidates feel compelled to pussyfoot around or cloak in euphemism. He has repeatedly stripped those cloaks of euphemism and equivocation away from his rivals, and especially from Rubio and Bush, the two candidates whom the Koch brothers and other deep-pockets GOP backers would presumably prefer.

Those guys (and Christie, to a lesser extent) have variously tried to tack with the Trumpian wind and then against it, tried to stay in his shadow, and tried to attach themselves to him like limpets, suggesting that they will accomplish almost the same impossible things he has promised without being quite as mean. Once again he has played them for fools, and forced them to face an unpalatable political choice: They can slither closer to the Trump position than they have already, revealing themselves to be craven, soulless panderers who will stop at nothing. Maybe we can bar Muslim tourists on alternate days? Or subject them all to cavity searches and blasts of radiation? Or exclude the ones who really “look Muslim”? Failing that, Trump’s rivals can stand there like doofuses, soberly announcing that the Donald has finally gone too far, and revealing themselves to the Republican electorate as Obama-loving, terrorist-coddling pantywaist traitors.

Ted Cruz and Lindsey Graham at least deserve credit for political clarity, if nothing else, although the results of their strategies are quite different. Cruz has never distanced himself from Trump to any meaningful extent, and has not done so this week. He has wrapped himself around Trump’s trunk like the Serpent around the Tree of Knowledge, waiting for that apple to fall into his mouth. Cruz’s only response to the ban-all-Muslims notion has been to say “No, that is not my policy,” trying to keep that forked tongue in his mouth while making clear yet again that he feels the pain of the Trump demographic and shares their deep concern about the impending Islamic takeover of America, and that if they ultimately decide they want someone a little smoother, with a bit more book-learning and less obvious signs of mental illness, he is available. Trump scares me plenty, but Cruz scares me more.

Graham, on the other hand, is an old-time Bush-Cheney neocon who forcefully supported the war that got us into this mess in the first place and now wants to wage another, bigger one. He is wrong on virtually every substantive policy issue and has no chance of being nominated or elected president (albeit for reasons unrelated to his wrongness). But God love the guy, he is not a fascist and he has understood from the beginning that the GOP's big 2015 swerve into Muslim-bashing and immigrant-bashing is terrible news for his party and for the entire country. On Tuesday morning, Graham called in to Scarborough’s show on MSNBC to describe Trump as “a xenophobic, race-baiting religious bigot.” It was by far the strongest language heard from any Republican candidate, and was entirely consistent with what Graham has said about Trump all along.

You will notice, of course, which of those two guys presents a viable threat to Trump’s front-runner status and which is running a Don Quixote campaign to save the Republican Party’s soul. We keep pretending to be surprised by the current of ugly sentiment that Trump has ridden for months now, but the time for shock and disbelief is over. Trump’s new plan to combat the Muslim menace overlapped on Monday with the news from France, where Marine Le Pen’s anti-immigrant, anti-Muslim National Front scored big gains in local and regional elections. One should not overstate the parallels; the European right and the American right are different creatures with different histories and major areas of divergence. (Le Pen's party is entirely secular, for instance, and has vowed to preserve social spending, at least for native-born French citizens.) But those events are hardly coincidental, and the obvious symbiotic relationship between them is deeply disturbing.

I was an early adopter of the journalistic thesis that Trump and Bernie Sanders were closely related phenomena, and represented opposing faces of populist resistance to the failed politics of the Republicrat duopoly. That remains a valid analysis, to some extent, but my enraged Bernie-loving friends were right about its limitations. Trump’s gargoyle act isn’t funny or useful or “provocative” anymore, and his comic-opera portrayal of Benito Mussolini -- can you parody someone who was a parody in the first place? – is getting closer to the real thing with every passing day. Has Trump gone too far? It’s the wrong question. America has gone much too far down a dark road, and we don’t have a light or a map to find our way back.