Nigella Lawson nails the smug #CleanEating trend: "People are using certain diets as a way to hide an eating disorder"

Healthy eating habits are one thing, but a life out of balance—and without cake—can be harmful, too 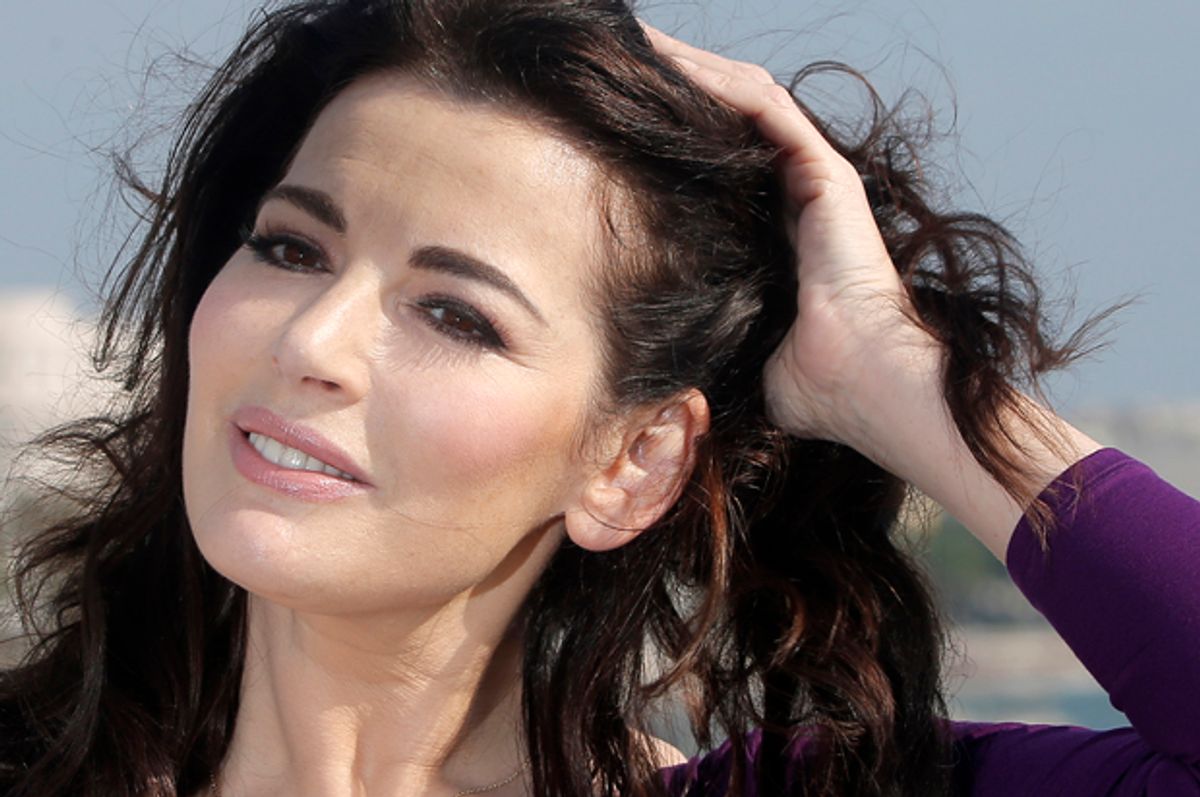 Let's make one thing very clear — eating kale does not put you on a higher spiritual level than everybody else. Speaking recently at the JW3 Speaker Series in London, domestic goddess Nigella Lawson has ripped, yet again, into the cult of "clean eating" and the hazards of equating food with virtue.

The Irish Independent reports this week that the author and television personality has left no room for doubt about her thoughts on deprivation as a lifestyle. "People are using certain diets as a way to hide an eating disorder or a great sense of unhappiness and unease with their own body. There is a way in which food is used either to self congratulate – you’re a better person because you’re eating like that," she said, "or to self-persecute, because you’ll not allow yourself to eat the foods you want."

It's a continuation of a theme she's been eagerly addressing while out promoting her latest cookbook, "Simply Nigella." On Ireland's "Late Late Show" last week, she observed, "When women say 'You have lost weight,' that is not a good thing. Generally I think it's not good if it's thought that being thinner is always better, and then what happens as a result of that is that somehow you're a better person. We've been reading about all this fat-shaming that's been going on. What's important is that you're healthy and you're fully embracing life. If you are naturally thin that's fantastic – but if you have to starve yourself to get thin, it is not good to encourage people to be that shape. I think my views are slightly different because I've seen people get very ill and very thin so I don't equate thinness with healthiness, so I think what looks healthy is when people have a bit of juice to them."

Lawson's mother, sister Thomasina and first husband John Diamond all died of cancer. On her "Late Late Show" show appearance, she added that she realized "later" in life that her mother likely had an eating disorder, saying, "I kind of put two and two together. I knew she had a thing about thinness but I worked it out later. When she was dying she allowed herself to eat. To wait until you've got a terminal disease to enjoy eating is an awful thing."

Earlier this year, Fast Company first reported that orthorexia — an unhealthy obsession with food believed healthy — was under consideration for entry into the Diagnostic and Statistical Manual of Mental Disorders. And while lifestyle bloggers like the Balanced Blonde's Jordan Younger have gone public with their struggles with what they call "disordered eating habits," you need only look as far as the sudden spike in juice joints in your nearest gentrifying neighborhood, the bestseller list, your Facebook friend's epic, incessant accounts from a recent cleanse, or God forbid, the last time you went to a restaurant with a large group of people to recognize how emotionally fraught eating has become.

And no phrase captures our cultural fetishization of food quite like the phrase "clean eating." There's a Clean Eating magazine. An Amazon search for cookbooks deploying those two words will yield a trove of results. You can find thousands of YouTube videos and nearly as many blogs devoted to the topic. Yet as Lawson told the BBC earlier this fall, "I think behind the notion of ‘clean eating’ is an implication that any other form of eating is dirty or shameful. I think that food should not be used as a way of persecuting oneself and I think, really, one should look to get pleasure and revel in what’s good rather than either think, 'Oh no, that’s dirty, bad or sinful' or that eating is virtuous."

Obesity rates — and with them serious health consequences — continue to soar. We are in the throes of a climate change crisis that could be dramatically curtailed by consuming less meat. Eighty percent of Americans eat fast food at least once a month, and half of us drink soda every day. And 20 percent of our meals are consumed in the car. There's no denying our habits are hurting us and the planet. But making the daily act of consuming food into some kind of holy ritual is not helping. The clean eating obsession takes the basic and relatively simple work of making and eating food and turns it into a vicious cycle of self-congratulation and guilt. So especially in this season of indulgence followed by shame, take Nigella's words as a call to sanity. "There are times when you need a slice of cake," she says. "You don't eat it every day but life has to be balanced and not too restricted."