"The Big Short": Financial catastrophe considered as a star-studded postmodern farce — where the joke's on us

Ryan Gosling, Steve Carell, Christian Bale and Brad Pitt bet on misery in a dazzling farce about a massive crime 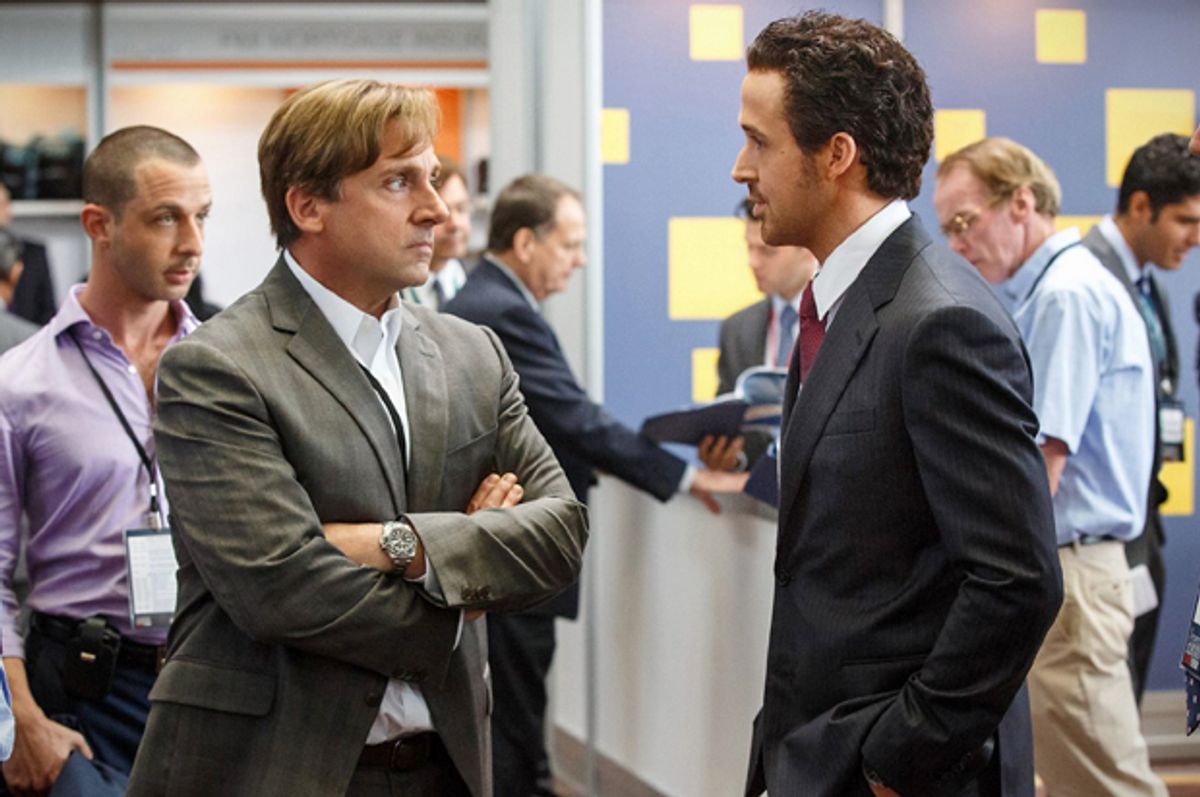 Adam McKay’s movie “The Big Short” is loaded with Hollywood stars showing off – Christian Bale playing a dysfunctional genius, Steve Carell playing a self-righteous jerk, Brad Pitt playing a Colorado hippie recluse – and calls attention to its own cleverness somewhat too often. It’s like a collaboration between Judd Apatow and Bertolt Brecht, or just a recognition that theatrical devices that used to seem confrontational or postmodern have now been completely mainstreamed. At one point Ryan Gosling, playing a contrarian Wall Street hotshot named Jared Vennett who correctly bets that the mortgage market would collapse in 2008, turns to the camera amid a heated conversation to observe that of course we don’t understand the complex financial instruments he’s talking about. That’s because we’re not supposed to, he says. “But here’s Margot Robbie in a bubble bath to explain it all.”

That sounds like bizarre pandering, and of course it is. But it works brilliantly because it cuts to the heart of Michael Lewis’ nonfiction bestseller, which McKay and co-writer Charles Randolph have adapted pretty faithfully, despite all the gamesmanship. The financial collapse and economic crisis of 2008 was a gigantic con job, enabled by politicians from both parties – most of all by the Clinton administration, frankly – and perpetrated by an elite caste of predatory criminals who looted the American people (and the people of the world) and got away with it scot-free. Both Lewis and the movie remain agnostic about whether the principal driving force behind the collapse was widespread fraud and corruption or simply widespread stupidity. Both were clearly implicated, and in either case unregulated and undisciplined greed – which apostles of the free market consider the ultimate virtue – proved instead to be immensely destructive.

Not all of McKay’s devices work as well as Margot Robbie in that bubble bath, doing her best to explain the mortgage-backed securities (MBSs) and collateralized debt obligations (CDOs) that made immense fortunes for Wall Street bankers, even as a few guys like Vennett or mid-level fund manager Mark Baum (Carell) or loner investment guru Michael Burry (Bale) began to suspect they were junk. Later interpolations involving Anthony Bourdain throwing day-old seafood in the stew pot, or Selena Gomez at the blackjack table, don’t quite pay off. But McKay’s highly entertaining thrill ride on the economic roller coaster never loses sight of the fact that Lewis’ central characters are ambiguous figures driven by familiar forces of self-interest, not Robin Hood heroes or Bernie Sanders activists.

There’s no doubt that the pugnacious, anger-fueled Baum and the smooth, stylish, above-it-all Vennett – both characters are fictionalized composites, but their real-life models can be found in Lewis’ book – yearn to stick it in the eye of The Man and prove they are smarter than anyone else. In a sense they have some shreds of social conscience, in that they see the entire financial system as corrupt (either purposefully or through idiocy) and are eager to prove it. But they make a historic deal despite their mutual mistrust, investing heavily in a newly invented instrument called a “credit default swap” that would pay off if the banks’ crazy-house of bogus securities collapsed, because they stood to make a fortune if they were right. Which they did: In the film, Baum’s fund clears $2 billion all by itself from the financial collapse in which at least 6 million Americans lost their jobs, 7 million homes were foreclosed and an estimated $16 trillion in household wealth was subtracted from the economy. In the real world, there were guys who profited on a similar scale from this catastrophe, which was of course many times larger than that if we consider the world economy.

McKay is Will Ferrell’s longtime writing partner and the director of both “Anchorman” movies and “Talladega Nights,” so he’s a conspicuously odd choice to dramatize a book that is both a complex morality tale and a work of power-nerd investigative journalism. But if “The Big Short” didn’t have these layers of absurdist splash and sizzle, and didn’t have four of the biggest male stars of our era playing deliberately outrageous outsiders and renegades, would you be even remotely interested in watching it? With its cartoonish pace, larger-than-life characters and detours into farce and agitprop, this movie captures the accelerated pace of life in the financial markets and the vast scale of their mendacity far more vividly than a naturalistic drama could. (I liked J.C. Chandor’s “Margin Call” quite a bit, for example, but it’s a totally different animal.)

As in “Moneyball,” Lewis is fascinated by the issue of data – why certain people can read it and understand it, and how they use it to gain advantages over others. But in the case of Billy Beane and the Oakland Athletics, the marketplace inefficiencies Beane exploited only involved baseball teams spending too much money on bad players, not a global economic catastrophe. In the case of “The Big Short,” we are left to wonder why Bale’s character, Michael Burry – who really exists, a Stanford-educated doctor who quit medicine to run a small but exclusive hedge fund from a California office park – was pretty much the only person who actually peered under the hood at the millions of mortgages beneath Wall Street’s elaborate Ponzi scheme of indecipherable interlocking debt.

What Burry discovered through his number-crunching was not especially difficult to understand, and should have been noticed by government regulators, ratings agencies and the banks themselves: By the mid-2000s, mortgage defaults were creeping inexorably upward, and in 2007 and 2008 a large proportion of subprime adjustable-rate mortgages, which lenders had been handing out to anyone with a pulse, would convert to higher rates that borrowers probably could not pay. Billions of dollars of investments that had been sold with supposedly ironclad AA or AAA rating would likely be rendered worthless. In McKay’s screen version of the story, of course we end up rooting for the irascible Mark Baum and the unctuous Jared Vennett, because they are Steve Carell and Ryan Gosling and we know they’re right when everyone else is wrong. But one could easily portray those guys as shameless sleazebags: Their “big short” rested on the premise that you and I and Aunt Tillie had been played for suckers, and that the real-estate boom that had apparently ensured the financial future of millions of American families was a collective delusion.

It seems clear in context that McKay wants Brad Pitt’s understated character, a onetime Wall Street whiz kid named Ben Rickert who now lives in the Colorado mountains nurturing home-grown organics and conspiracy theories, to serve as a moral counterpoint. Rickert serves as the private Yoda to a couple of enterprising kids from his hometown, played by Finn Wittrock and John Magaro, who land in Manhattan with a few bucks to invest and catch wind of Vennett’s illogical but irresistible credit default swap scheme. He repeatedly reminds them that there’s no such thing as non-dirty money, especially when you’re essentially taking side bets on other people’s misery.

Pitt helped produce this movie (as he also did with “Moneyball”) and I appreciate his desire not to hog the spotlight and to play the voice of quiet, Dickensian decency. But Rickert simply isn’t as compelling as conflicted characters like Vennett or Baum, who are driven to do what they do by larger forces they either can’t evade or don’t try to. I don’t think McKay meant to make an anti-capitalist manifesto (or that Lewis meant to write one), but to my taste such is the intriguing effect of “The Big Short.” The system is much bigger than anyone, and overwhelms all notions of individual good or evil. Its internal logic dictated that the bankers should steal from us and wreck the economy, while blaming the whole thing on injudicious decisions made by ordinary people, and then that we should bail them out and they should go unpunished. Given all that, can anyone doubt it will happen again, and sooner than we think?