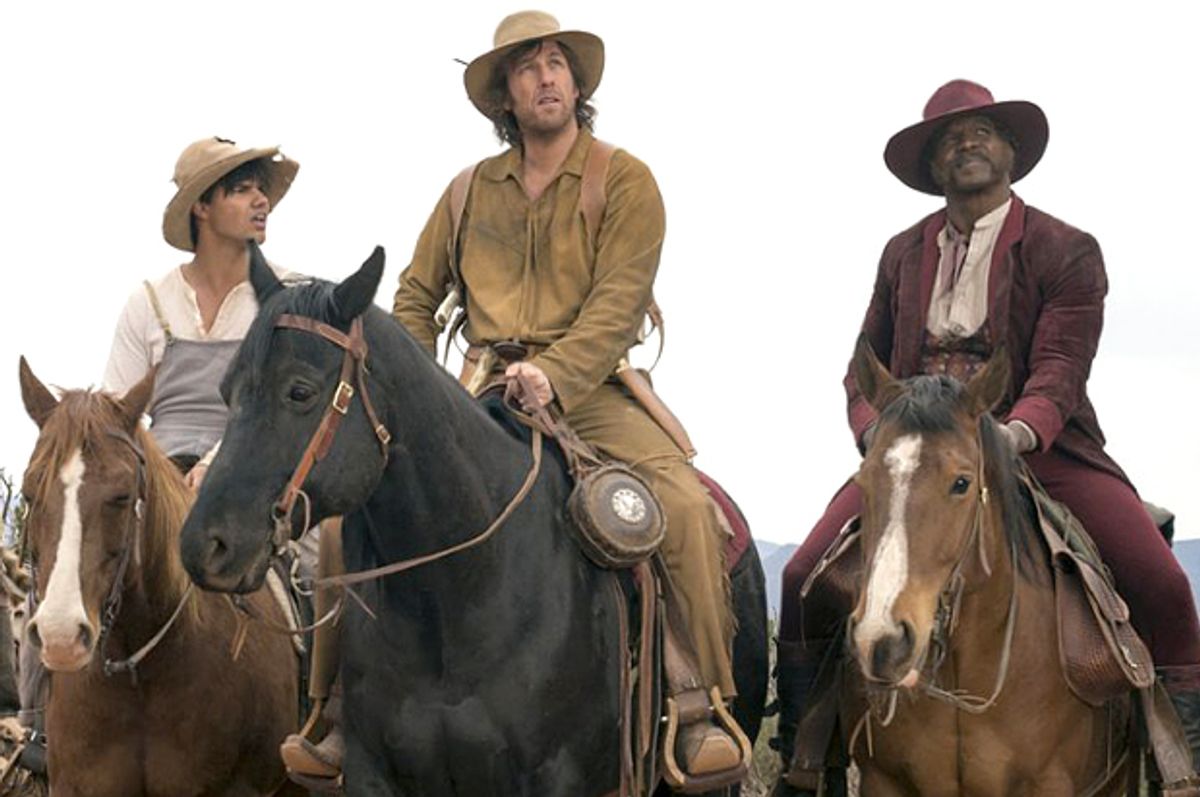 As I watched “The Ridiculous Six,” my mind kept returning to an old episode from the popular Web series “Half in the Bag.” While reviewing the comedy “Jack and Jill,” critic Jay Bauman came up with a list of stale tropes that predictably appear in all of Adam Sandler’s movies. Nestled between entries like “general whorish product placement” and “scenes of forced sentimentality to trick the audience into thinking the movie has a heart,” there was one that applied perfectly to the inherently problematic nature of his comedy – namely, “jokes at the expense of physical abnormality or ethnicity,” or as Bauman puts it, “jokes at the expense of people who are different.”

In other words, Sandler movies contain lots of jokes that punch down.

Even before it premiered on Netflix today, “The Ridiculous Six” managed to incur controversy for punching down against Native Americans, who feature prominently in the film’s story. As I discussed last April, several Native American actors walked off the movie’s set to protest what they considered insensitive jokes about Apaches (more on those in a moment). Later a cellphone video leaked in which producer Barry Bernardi told the actors they “shouldn’t be in the movie” if they’re “overly sensitive” about those types of jokes. Shortly after that, another Native American actor from the picture spoke out in Sandler’s defense, observing that there were 150 other Native American extras who happily participated in the production and claiming the leaked video omitted Bernardi’s promise to include a disclaimer noting that the movie is historically inaccurate. He even noted that during a private meeting “the last thing that [Sandler] said before he got up was that the thing that made him feel the worst is that four people got their feelings hurt.”

Watching “The Ridiculous Six,” it’s easy to see how the filmmakers – including director Frank Coraci and co-writers Tim Herlihy and Sandler himself – could believe their movie was harmless. The Apache characters are depicted in unambiguously sympathetic terms, and while there are plenty of racial jokes, the movie seems determined to be an equal opportunity offender, even by occasionally putting white people in its cross hairs. Indeed, numerous white characters are depicted as vicious bigots (and as such worthy of being robbed or in other ways receiving karmic punishment), and one early joke shows an American Indian doing his white people impression by shouting, “Hey, guys, let’s play with our chest hair and eat potato chips.”

Nevertheless, when it comes to its underlying racial message, “The Ridiculous Six” still grates, and there are obvious moments when it appears to be punching down almost without realizing it. To understand why, it is necessary to briefly analyze the kinds of jokes that appear in the movie. Warning: Spoilers ahead.

The difference between telling a decent joke about historically marginalized groups and simply punching down is simple: While both expect the audience to laugh at sensitive subjects, the latter hold no meaningful social insight and go no further than laughing at someone else’s expense for being different. The most conspicuous example of this in “The Ridiculous Six” is Rob Schneider’s character Ramon, whose half-Mexican heritage is appropriated by Schneider, who is Jewish and Filipino, with a garishly stereotypical mustache and exaggerated accent. Even though Ramon is one of the film’s heroes, it’s hard to argue that he isn’t meant to be a walking punch line against Mexicans (a group Sandler also took potshots at in “Jack and Jill”), particularly with the running gag about an implicitly bestial relationship between him and his donkey. This, regrettably, is consistent with Schneider’s long tradition of pantomiming other races and ethnicities for laughs (Cajuns in “The Waterboy,” Hawaiians in “50 First Dates,” Chinese-Americans in “I Now Pronounce You Chuck and Larry”).

Schneider’s contribution to the movie may be its most offensive, but the punching down hardly stops with him. There is a cross-eyed outlaw who is forced to gouge out his one working eye for a gruesome gross-out gag, an obese hairy half-mute who lives in a shack, an American Indian woman who is mocked for having an ugly face … The list of characters who exist mainly to serve as punch lines at the expense of their marginalization goes on and on and on, in big ways and small. The movie is littered with these examples, to the point where one suspects that the Sandler comedy crew is so entrenched in the habit that they can’t snap themselves out of it.

What makes this particularly unfortunate is that there is a brain behind Sandler’s comedy as well, which is evident in the movie’s more successful moments. My personal favorite was a scene in which John Turturro appears as Abner Doubleday and teaches the main characters how to play baseball. The joke here is that the arbitrary rules of the modern game were actually created by Doubleday to cover up his transparent efforts to cheat, a sly satire on the absurd randomness that we take for granted when participating in America’s pastime. On another occasion, Luke Wilson plays a presidential bodyguard on the night of Abraham Lincoln’s assassination and lets John Wilkes Booth into the back of Ford’s Theater because he is so star-struck, a particularly clever gag that pokes fun at our celebrity culture (after all, Booth was indeed a famous actor before he shot Lincoln).

While these scenes are worth seeing on their own, however, they are regrettably lost in a tidal wave of lame cheap shots. And yes, “The Ridiculous Six” does indeed promote the same lazy stereotypes about American Indians that audiences have already seen countless times: The Apache costumes, instead of being authentic, are the same generic “Indian” garb from every other stock Western; there is a running joke about Sandler having powers to do “mystical shit” because he was a white man raised by the Apaches; and even some of the jokes that prompted the initial walk-out remain intact, such as the character names Never Wears Bra and Beaver Breath.

Are these hateful? My sense is no – as mentioned earlier, the Native Americans are clearly meant to be sympathetic. That said, a joke doesn’t have to be born out of hate for it to be offensive. In this movie as with so many of Sandler’s others, the offensiveness comes from its juvenile and mean-spirited milieu. “The Ridiculous Six” expects us to laugh at Mexican and American Indian stereotypes in the same way that we’re expected to guffaw at bathroom humor and elementary slapstick. In so doing, it cheapens the feelings of people who are no longer willing to have their experiences reduced to the same tired comedy tropes … and, in the process, takes the fun out of what might otherwise be funny for a lot of people.

The shame of it is that Sandler can, and has, done better. Even though I’d still say “The Ridiculous Six” is worth seeing (at least if you’re a fan of Sandler’s comedy style), it hasn’t quite managed to free itself from the controversial reputation it developed during its production. One can only hope that Sandler learns from his mistakes here in his future movies.