Rahm Emanuel's catastrophic downfall: Why it should be a much bigger deal for Hillary Clinton

Chicago's mayor has been embroiled in a horrifying police-abuse scandal. This should be front-page news nationwide 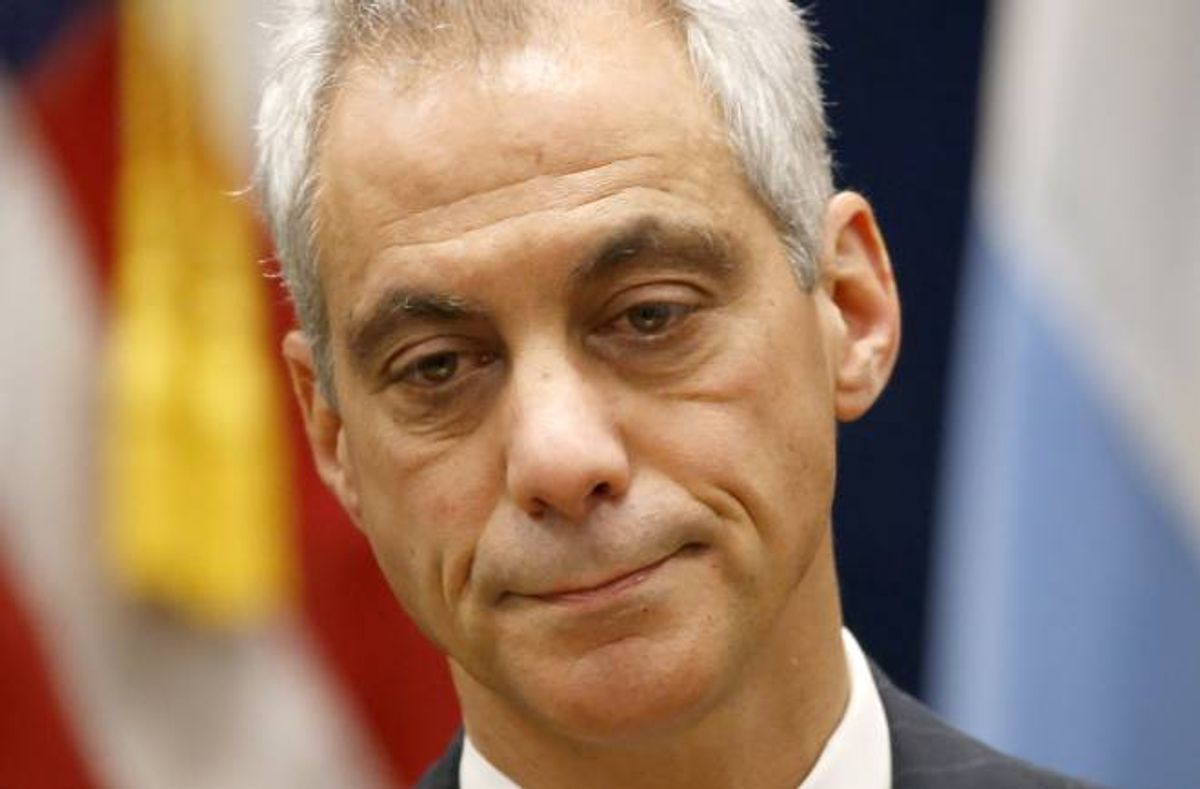 Chicago mayor Rahm Emanuel is in big trouble. In the wake of the scandal surrounding his police department's execution of teenager Laquan McDonald, local columnists have declared that he has permanently lost his grip on the city. More than half of Chicago residents in a recent poll said he should resign. His teary apology for McDonald's killing got him nowhere.

The mayor of the third-biggest city in America—whose stewardship of Chicago was dire enough before you even got to the police—is on the ropes. He is a former right-hand man to both Barack Obama and Bill Clinton, whose wife, you may have heard, is now running for president.

Why isn't any of this a bigger deal in the 2016 presidential race?

Hillary Clinton—who goes a long way back with Emanuel— has gotten away with saying very little about the crisis unfolding in Chicago. She backed the Justice Department investigation into the Chicago Police Department and said that she continued to have confidence in Emanuel. And that's about it.

NBC News speculated on Friday that Clinton's dominance in the polls is shielding her from having to more fully respond to Emanuel's misdeeds and preventing the Chicago crisis from becoming a more central issue in the campaign. If that is so, then it's a disgrace. Clinton should be made to face the Emanuel issue over and over again–both because of her history with Emanuel and because of the despicable nature of what has happened on his watch.  So should every other 2016 candidate.

Let's just remind ourselves of why Emanuel is in such a bind. There is ample evidence that, at the very least, people close to him were aware just two months after McDonald's death that a video of his killing existed. The video thoroughly contradicted the initial lies that the CPD told about McDonald's death. The Chicago government then kept the video under lock and key for over a year, crucially allowing Emanuel to win re-election in the interval. After evidence of the video surfaced, made every effort to suppress it—including tacking a clause prohibiting its release into a settlement with the McDonald family—only releasing it after an independent journalist successfully sued the city to get it unsealed.

And it's not just the McDonald scandal. There is also the issue of Homan Square, the secret facility that the CPD has used to literally disappear thousands of people, almost all of them stuffed into a virtual domestic black site without charge or access to an attorney. The overwhelming majority of those detained are black. Some detainees have described horrific sexual abuse at police hands. One lawyer who knows what goes on at Homan Square told Mother Jones that the conditions there meet the international standard for torture. Faced with this, Emanuel replied that Homan Square was "by the books."

So here we have a city whose police department lied about and then tried to cover up the brutal killing of a young black man. The same department is also running its own personal gulag. Oh, and it's also the same department that has cost Chicago nearly $500 million in misconduct settlements since just 2004, and that has a lengthy history of torture and other abuse. It is now under federal investigation. By any measure, what is happening in Chicago, and to Rahm Emanuel, is a terrible scandal that cuts to the heart of the debate we've been having about how the police operate in this country and whether black lives are treated with any value.

This debate has become a major theme of the Democratic primary. Hillary Clinton has tried to make it a major theme of her campaign. Whether she is doing that successfully is up for debate, but it would be a huge mistake if she was allowed to sidestep the injustice taking place in such a key Democratic stronghold as Chicago, especially when she has such an extensive political history with the man overseeing the mess there. One of the most important places in the United States has an institutionally bigoted police force. What does Clinton think of that? What does it mean for her plans to tackle these problems? If someone other than Emanuel was running Chicago, would she be supporting that person?

People need to demand that Clinton truly grapple with the details of the scandal, and to ask her if her support of Emanuel really can be squared with her purportedly aggressive stance on criminal justice issues. She should be questioned about why she still has confidence in Emanuel when the majority of his constituents don't. If she is really going to put her loyalty to Emanuel above what is so clearly a cesspool of corruption and racism, then she should be made to fully articulate that stance. Bernie Sanders has been tougher on the Emanuel question, but he should be held more clearly to account as well. It's easy to predict what Republicans will say about all of this, but they also need to be put on the record.