Serena Williams earned this: It is 2015, and some people would still rather see a horse named Sportsperson of the Year than a human woman 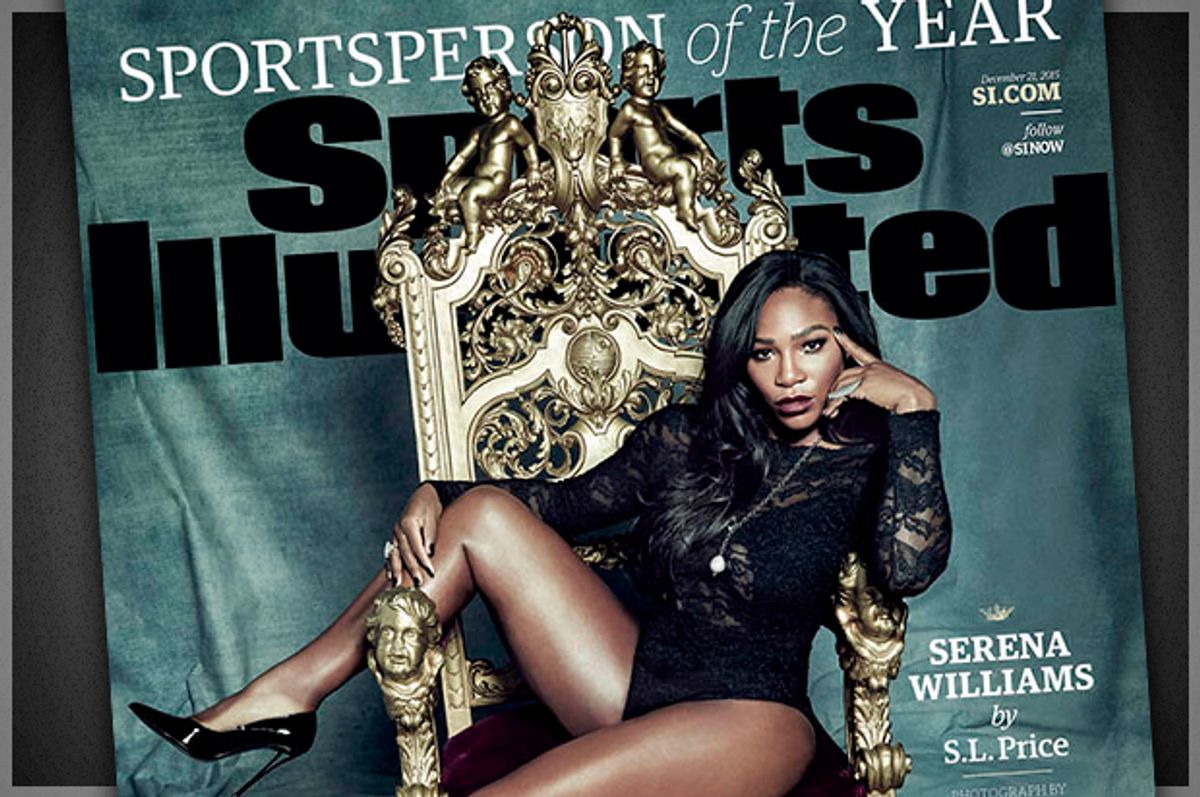 Serena Williams is one of the greatest athletes of all time. Period. She needs no qualifiers: male, female, human… horse. How is this even a question? And yet, when Sports Illustrated named Williams its 2015 Sportsperson of the Year, the pick was greeted in some circles with howls and neighs of protest.

On Sunday, SI announced that American Pharoah had won its online reader poll, "as the one who embodied the spirit of sportsmanship and achievement this year." There's no question the 3-year-old colt achieved a tremendous amount this year, winning the Triple Crown for the first time since Affirmed in 1978. He then scored an unprecedented further victory by taking the Breeders' Cup Classic. Comparatively speaking, perhaps Serena Williams had a relatively so-so year. Sure, she won at the French Open and at Wimbledon — for her sixth time in 13 years -- but big whoop, she lost at the US Open. Yet as SI explained, when it named her and not American Pharoah its Sportsperson of the Year, "Williams, 34, won three major titles, went 53–3 and provided at least one new measure of her tyrannical three-year reign at No. 1. For six weeks this summer — and for the first time in the 40-year history of the WTA rankings — Williams amassed twice as many ranking points as the world No. 2." She also returned to Indian Wells for the first time since she received a famously hostile reception from the crowd there in 2001, explaining, "I needed to go back there and speak out against racism."

Williams has, as SI notes, spent this year using her power and platform for social change, guest editing the October issue of Wired and urging, "To those of you involved in equality movements like Black Lives Matter. I say this: Keep it up. Don’t let those trolls stop you." And she certainly knows all about trolls of all stripes. In July, the New York Times profiled her with the damning observation she has "large biceps and a mold-breaking muscular frame, which packs the power and athleticism that have dominated women’s tennis for years. Her rivals could try to emulate her physique, but most of them choose not to." Yet she refuses to be defined by critics who flinch at her power. Last month, she was revealed as one of the models for the 2016 Pirelli calendar, looking stunning and strong.

Sports Illustrated has only named a solo woman its Sportsperson of the Year twice before — the last time was Mary Decker in 1983. The magazine rarely puts women on the cover at all — at least actual athletes, not bikini models— and even more rarely spotlights women of color. A 2013 study from the International Review for the Sociology of Sport found that over an 11-year span, women appeared on only 4.9 percent of the magazine's covers — and many of them were "minimized by sharing covers with male counterparts, featuring anonymous women not related directly to sports participation, sexually objectifying female athletes, and promoting women in more socially acceptable gender-neutral or feminine sports."

In naming Williams — who sits on the cover perched authoritatively on a throne like the boss she is — the magazine is acknowledging a bona fide sports legend who has been winning major titles since the '90s. But it has also incited those who dispute that it was American Pharoah who had the truly banger year. Horse Racing Nation groused on Monday that "But … American Pharoah won the Grand Slam, and Serena Williams did not." The LA Times, meanwhile, invited readers to reply, "Serena Williams or American Pharoah: Who's the real sportsperson of 2015?" (Hot take: The one who's a person.)

It all feels strangely familiar — six years ago when Williams edged out the thoroughbred Zenyatta for AP Female Athlete of the Year, Bleacher Report complained that "Angry nag edges horse," calling Williams a "big-boned diva" in the process. Charming!

Nothing against American Pharoah, who has been put out to stud now, but give the queen her due. The colt had a great year. Williams has had 16 of them. As Andy Roddick explained as he made the case for her, "We can’t penalize Serena because she’s been winning everything for so long. Someone shouldn’t be punished because we’ve grown to expect it from them."