Auschwitz as an industrial workplace: Devastating Holocaust drama "Son of Saul" finds a new story in the Nazi death camp

Spend a riveting, nightmarish two days with a death-camp worker in the amazing Holocaust film "Son of Saul" 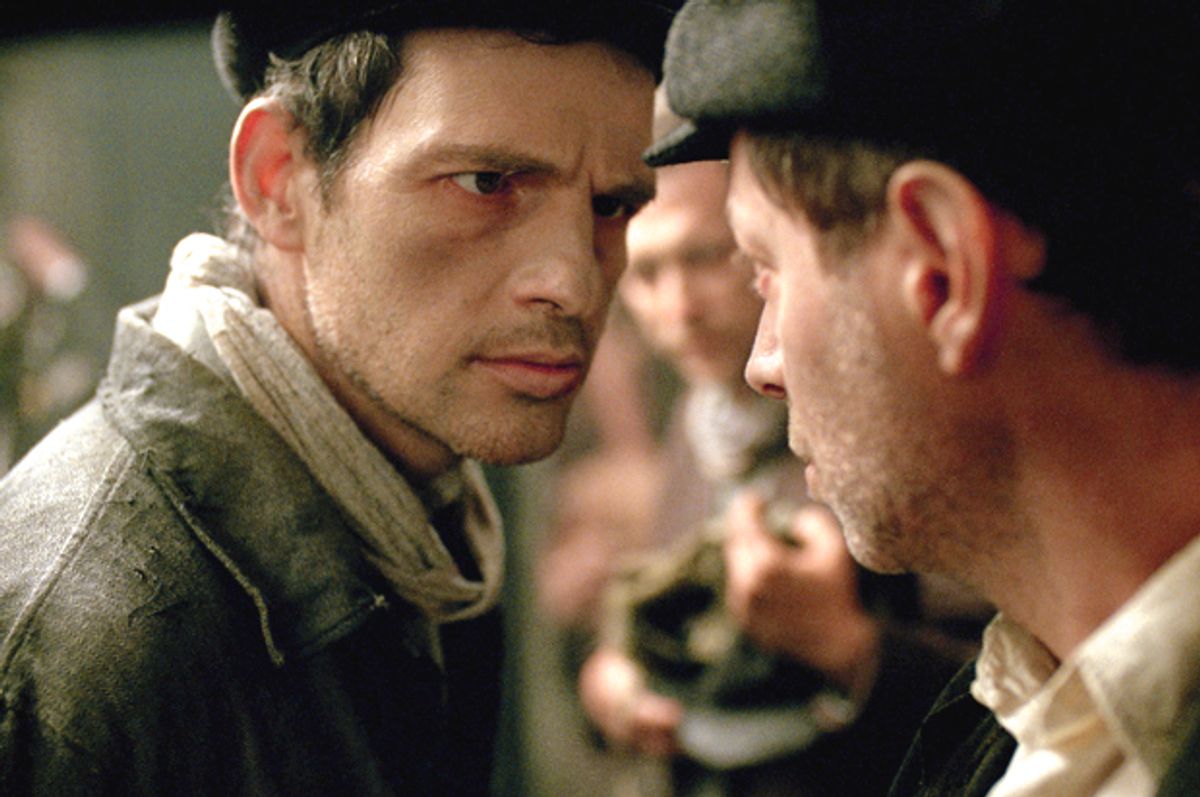 You may suspect there are no more untold stories about the Holocaust, the central signifying event of the 20th century, or at any rate no new ways of telling them. I suspected that myself, but “Son of Saul,” the riveting debut feature from Hungarian director László Nemes, proves otherwise. Gripping from its first frame to its last, and ending with a shot of unforgettable and heartbreaking simplicity – just a stand of trees in a Polish wood, through which we have seen a small boy running away, stirring in a gentle breeze – “Son of Saul” is a work of superlative filmmaking craft and moral intensity.

Most of the film is shot in medium close-up or extreme close-up, so there are often background or foreground events occurring out of focus that we can only partly apprehend. (Sometimes we may not want to.) For most of the running time, cinematographer Mátyás Erdély (shooting on old-school 35mm film) remains tightly focused on the face of a concentration-camp inmate named Saul Ausländer, who is played by the remarkable Hungarian actor Géza Röhrig. If my rudimentary German does not fail me, Saul’s last name means “foreigner,” and the clear implication is that (like the actor Röhrig) he is a Hungarian of German background, who may understand more of the Nazi guards’ language than he lets on.

Saul is a Sonderkommando, a Jewish inmate compelled to work as slave labor in a death camp. Although the camp in “Son of Saul” has been identified as Auschwitz, it might as well be Treblinka or Belzec or Sobibór or a number of other places. If this is indeed Auschwitz, we are late in World War II, probably the summer or fall of 1944, when the tide of war had turned decisively against Germany and Hitler’s administrators devoted considerable resources to exterminating as many Jews as possible during the time left to them. Of course the Nazi regime had already committed unforgivable war crimes by that time, but one measure of its insanity lies here: Faced with imminent defeat, the Germans did not make the logical decision to abandon the Final Solution and pour all available money and manpower into military counterattack. It would appear they decided that killing Jews was more important than winning the war.

We never see that level of contest in Nemes’ film, but Saul and his fellow Sonderkommando have no illusions about what’s going on. They have been selected from most able-bodied of male arrivals, and they are being kept alive for a few months, with enough food and sleep to sustain them, because the SS needs them to perform the menial labor that keeps the camp running. For the first time in any Holocaust movie I can remember, we understand a death camp as an industrial production system – as a workplace built around repetitious tasks, with laborers who shirk and complain and steal and bosses who grumble, make unreasonable demands, take bribes and pass the buck.

Is it obscene to consider the gas chambers of Auschwitz as a factory, not inherently unlike one where trousers are sewn or automobiles banged together? (Or where cattle are slaughtered, to take the obvious parallel.) Of course it is, but that was precisely the displacement mechanism that allowed the officers, guards and inmates to move from one day to the next in a semblance of normal behavior. The industrial process in which Saul works is mass murder, to be sure, and its principal output is dead bodies by the thousands, which create an increasingly difficult disposal problem. (The men, women and children to be dragged from the gas chambers are always described as “pieces” by the guards.) As in any industrial process, there are important byproducts as well. One of Saul’s jobs is to pull down and sort all the clothing that new arrivals have hung on hooks before being sent to the “showers,” looking for hidden gold, jewelry and other valuables.

All that loot is supposed to be surrendered to the SS guards, of course, but everyone understands that some of it disappears along the way. Such hidden valuables are the most important camp currency, and as we learn during the two-day narrative arc of “Son of Saul,” they can be used to acquire almost anything short of actual freedom: Food, liquor, sexual liaisons and even packages delivered from the outside. Saul and the other Sonderkommando display no visible emotion about the tasks they perform, which include participating in the killing of other Jews and then stealing their belongings. How would despair or grief help them to survive? But that is not to say there is no humanity left in them, or no moral sensibility.

Saul wants to spend his ill-gotten loot to pay for rabbinical services from another inmate, for reasons that become clear very early in the film. This puts him in potential collision with a cabal of inmates who are stockpiling smuggled arms and planning an uprising, and want all the stolen gold to go toward that end. There were several acts of armed rebellion in the extermination camps, most famously at Sobibór, where roughly 400 inmates broke out in October 1943 and at least 58 are known to have survived the war. Nemes’ screenplay, co-written with Clara Royer, is no doubt based on a documented uprising at Auschwitz-Birkenau that happened about a year after that, but I would advise you not to look up that history before you see the film.

I would say that Nemes never cheats for one second in “Son of Saul.” He never tries to make this dire episode of human history any better than it was, never looks for extraordinary humanity or decency among the Nazis and does not try to make the unpalatable moral dilemma of someone like Saul any easier to manage. Yet in telling a story that we know can have no good outcome, about a man who has been compelled to aid in the destruction of his own people and also compelled to crush or quell his own instincts and emotions, “Son of Saul” actually finds the possibility of freedom and transcendence and even hope. Röhrig’s impassive, single-minded performance as Saul breaks exactly once, just before that last shot of the trees in the Polish wind, and at that moment we see a human being who has not surrendered, and who sees that there is life beyond this living hell.

"Son of Saul" opens this week in New York and Los Angeles, with wider national release to follow.