How do Republicans convince voters they're not the party of the rich? The Koch brothers have a lame, shallow plan 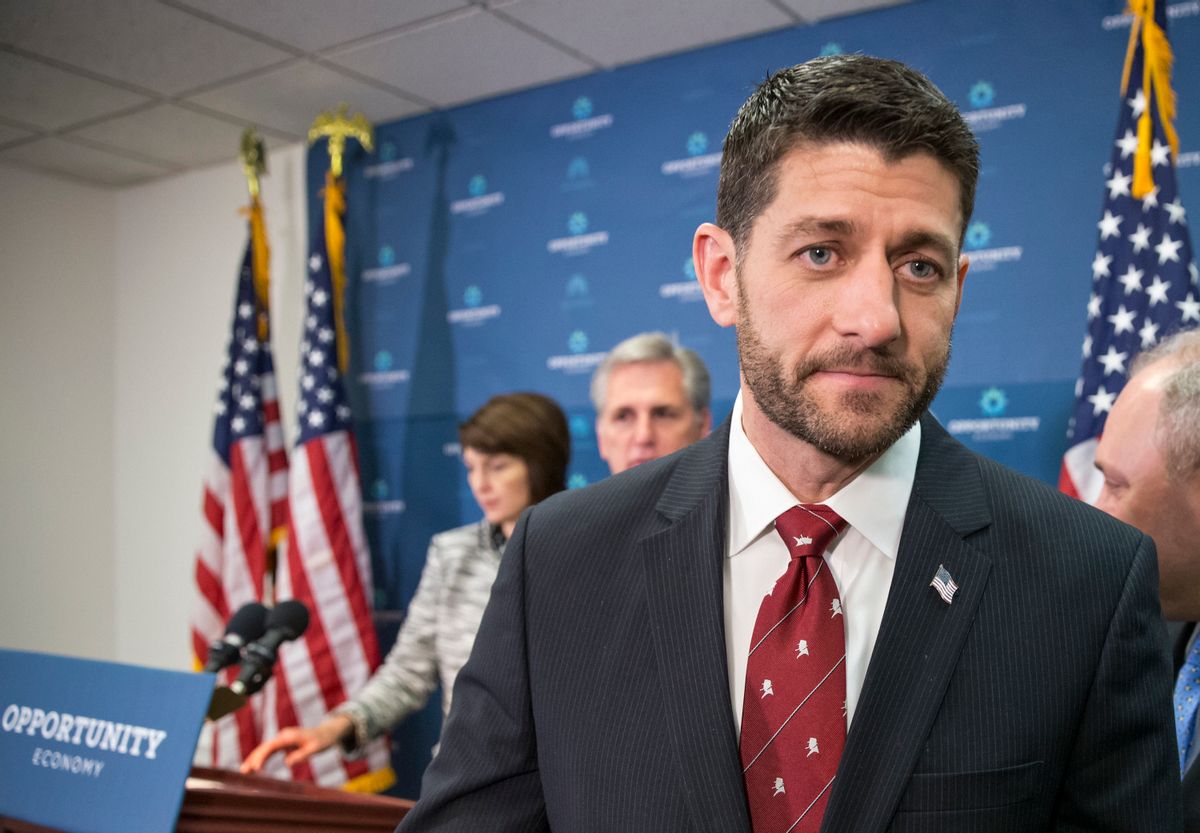 In this Dec. 1, 2015 photo, Speaker of the House Paul Ryan, R-Wis., departs a news conference following a GOP strategy session at the Capitol in Washington, Tuesday, Dec. 1, 2015. From left are Rep. Cathy McMorris Rodgers, R-Wash., chair of the Republican Conference, Majority Leader Kevin McCarthy, R-Calif., Speaker Ryan, and Majority Whip Steve Scalise, R-La. After months where tea party lawmakers provoked crisis and unrest in Congress, even driving out a speaker, GOP leaders have turned to the business of governing, pushing forward a series of bills destined to get a presidential signature. (AP Photo/J. Scott Applewhite) (AP)
--

There’s been a recent upsurge in very public conservative hand-wringing over the plight of the American poor. Coming off the 2012 election as part of the losing presidential ticket, newly ensconced House Speaker Paul Ryan went on an under-the-radar-but-not-quite-so-under-the-radar-that-a-few-prominent-journalists-didn’t-hear-about-it poverty “listening tour” that culminated in a big report on how to fight poverty the free-market way. Republican Sens. Rob Portman and Tim Scott got in on the action, as did presidential candidates Marco Rubio and Rand Paul. It was a coordinated effort intended to convey one simple message: the Republican Party cares about the poor.

Sending that message became a necessity in the aftermath of Mitt Romney’s defeat at the hands of Barack Obama. Romney lost that election in part because he was a living caricature of a comically out-of-touch plutocrat, and in part because the policies he backed were obviously and inarguably designed to favor the rich. The problem facing Republicans is that those policies – wild tax cuts for the wealthy, massive cuts to social welfare programs – form the backbone of the party’s economic agenda and couldn’t just be jettisoned. So they had to set about changing their image while holding on to the same basic ideas that sunk Mitt “47 Percent” Romney.

That’s where Americans for Prosperity, the Koch brothers’ primary outlet for political activism, comes in. Last year, the organization resolved to set about revamping the image of conservatives and Republicans as a party concerned primarily with the wealthy. “If the presidential election told us anything,” read an internal AFP strategy memo from 2014, “it’s that Americans place a great importance on taking care of those in need and avoiding harm to the weak.” Their primary concern was the “misconception” that “free-market policy – and its advocates – benefit the rich and powerful more than the most vulnerable of society.”

And as Politico’s Ken Vogel reports, the fruit of this AFP strategy memo is a multimillion-dollar effort by the group to provide “turkey giveaways, GED training and English-language instruction for Hispanic immigrants to community holiday meals and healthy living classes for predominantly African American groups to vocational training and couponing classes for the under-employed.” Along with these handy tips on how to be a more effective poor person, the Koch outfit is also throwing in “a healthy dose of proselytizing about free enterprise and how it can do more than government to lift people out of poverty.” Well hot dang. It’s bargain-hunting and bootstrap-lifting with Charles and David Koch.

All of this is based on the idea that government programs don't effectively combat poverty. This is untrue – recent research has found that “government policies have significantly reduced the share of the population in poverty, and the share in deep poverty, throughout the 45 year period” between 1967 and 2012. But the conservative and Republican war on the War on Poverty insists that government action serves only to make poverty more entrenched, the idea being that if you simply give a low-income person the basics to eke out an existence below the poverty line, they’ll never be incentivized to get out there and chase the American dream of upward economic mobility. Where they run into trouble is in trying to pitch this idea without insulting the people who receive the benefits as entitled layabouts who would rather live comfortably on the taxpayer dime than find productive work.

It used to be that they just didn’t care. If you were poor and receiving government benefits, Republicans derided you as a lazy mooch or a “welfare queen.” Paul Ryan would talk about the safety net as a “hammock” and split people into two groups: the “makers” (hardworking taxpayers) and the “takers” (welfare recipients). He’s since abandoned that sort of talk, as have other image-conscious Republicans who now try to push responsibility for persistent poverty more onto the government programs than the impoverished themselves. Thus you have Charles Koch, quoted in Politico, saying the aim of the AFP program “is to remove the shackles preventing all Americans, especially the disadvantaged, from pursuing their dreams.”

On a basic level this shift in rhetoric makes sense – nobody wants to be in shackles – but some fundamental problems remain. The conservative push to curtail welfare programs is based on the idea that if you cut off the benefits, people will be forced to find work. This overlooks the fact that a large percentage of welfare recipients already work full- and part-time jobs. And, as Greg Sargent notes, the policies that Republicans and the Koch network support are still either skewed hugely in favor of the rich (literally every Republican presidential candidate's tax policy, for example) or would, in some cases, actively punish lower-income people (literally every Republican candidate's promise to undo Obamacare’s Medicaid expansion).

“Sometimes, we have not been as good at explaining the virtues of economic freedom and individual liberty to people who are struggling,” AFP’s president told Politico. It’s a problem that goes beyond simple messaging or “connecting” with low-income voters, and it seems unlikely that it will be solved with a few free turkeys.