Having been urged to die and singled out on social media as an Enemy of the People, I come to beg forgiveness 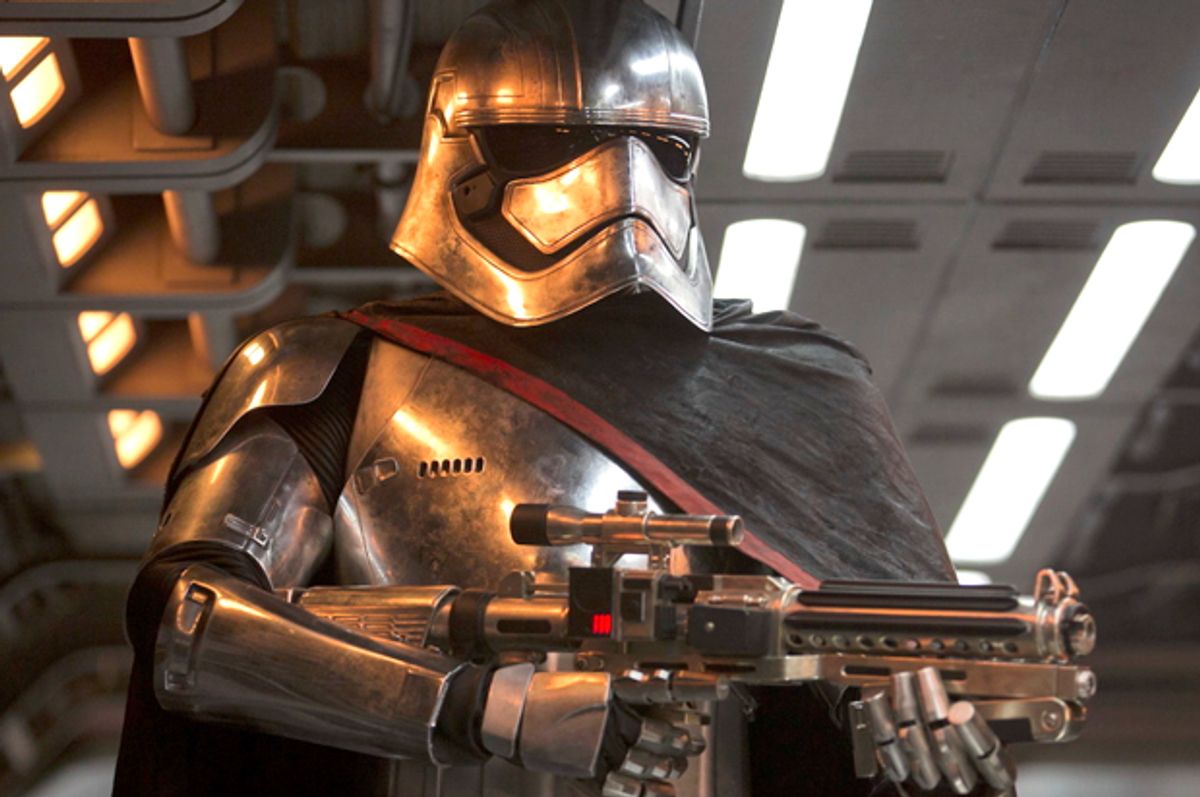 After Josef Stalin’s death in 1953, a mysterious note was found among his private papers. It had been sent by Nikolai Bukharin, Stalin’s revolutionary comrade and for many years the Communist Party’s intellectual figurehead, while awaiting execution after his 1938 show trial for numerous imaginary crimes. Using a nickname only known to the dictator’s oldest friends, Bukharin wrote: “Koba, why is my death necessary for you?”

I would like to ask the same question to the guy who wrote to me on Wednesday – from his work email! In Canada! – in response to my review of “Star Wars: The Force Awakens.” “Dear Mister O’Hehir,” he wrote. “Please just die (like Roger Ebert did) and leave us alone.”

I got a number of other angry responses from “Star Wars” fans through various channels, and was identified in a Twitter meme as one of the “Hateful Four” -- the only four critics, at that writing, who had supposedly rendered negative verdicts on “The Force Awakens.” (That number is quite a bit larger now.) I considered writing to the Rotten Tomatoes people to say, “You know, I honestly think that review is 53 percent positive.” But fame is hard to give up, even when it’s the fame that comes along with being an Enemy of the People. But no one else came close to Mister Angry Canadian.

Now, I have been doing this for a while, and weird hate mail comes with the job. I have gotten way worse emails than that from right-wingers over my political columns. (I especially hate it when they call me a “liberal.” Such a burn.) Last year someone described in graphic detail what would become of me and my family after white patriots seize power in the Second American Revolution. My recent article about a tepid press event promoting Michael Bay’s forthcoming Benghazi movie – jocular and lightweight in tone, I thought – attracted numerous incoherent tweets from people whose profile photos involved American flags and semiautomatic rifles.

I know that dude in Canada is not actually going to kill me. For one thing, he’s Canadian, so if he owns a gun at all it’s his grandpa’s single-shot hunting rifle. My analogy with Josef Stalin is totally facetious, although I am, in a roundabout fashion, hoping to make a point there. No doubt he was having a bad day at his real estate office or whatever. (I’m serious: This guy is in the sales profession.) But the thing is, he felt angry enough about a movie review that he told a total stranger to please go die, and for good measure threw in a drive-by assault against the most beloved figure in Internet history.

Roger Ebert would probably have written back and tried to engage that guy in an actual discussion – Have you seen the movie? What did you like about it? Why does it make you so unhappy that I had a different reaction? – and somehow drag the exchange back to the ground of human decency. Roger was without doubt a more generous person than I am.

But still: Why is it important to fans of a hugely popular movie, which has already dominated the entertainment media for weeks and will surely wind up among the top-grossing releases of all time, that no one disagrees with them or adopts a more detached perspective? Why are dissenters from a mass-culture wave phenomenon like “The Force Awakens” or the “Avengers” and “Dark Knight” movies so often subjected to venom and name-calling, as if they had simultaneously run over someone’s dog, spat on a wounded veteran and begun a conversation by loudly saying, “Not to be racist, but …”?

I’m not claiming that kind of exaggerated rancor is unanimous, because it definitely isn’t. I’m sure the vast majority of “Star Wars” fans could not care less what I or Stephanie Zacharek of Time or Kate Taylor of the Toronto Globe and Mail or the authors of the other “splat” reviews listed on Rotten Tomatoes have to say about the franchise reboot they have awaited so long and embraced with such enthusiasm. Why in God’s name should they? Have we dampened their enormous collective love-fest with our complaints (many of which are exceptionally mild in nature) or our attitudes of irritating intellectual dispassion? Have we cast doubt on the movie’s box-office prospects, or endangered the production of future sequels?

The answers to both of those questions ought to be “no,” and the answer to the second one is NO in boldface and capital letters with a whole lot of exclamation marks and 1’s after it. That throws us back toward an irresistible conclusion that is likely to make me even more friends than that “Star Wars” review did. When some subgroup of fans becomes enraged about a few critics pissing in the punch bowl at the super-fun party to which everyone in the world was invited, that isn’t really about the critics.

It’s about something else, most likely a lingering sense of insecurity and doubt. It seems laughable for people who love “Star Wars” or the Marvel movie-verse to feel insecure about anything, but I can understand it a little. Despite the total global victory of ComiCon-style pop culture on all fronts – which happened years or decades ago, at this point – the last ghostly vestiges of the old, defeated high culture still linger on the margins of the battlefield, wearing pince-nez and translucent cardigans and murmuring in disapproval. Victory was total, yes, but not yet totalitarian. Fans of space operas and comic-book movies and other dominant popcorn genres in film and TV can dimly remember, or think they can remember, a not-so-distant past when “culture” was the province of severe-looking Susan Sontag people out of New Yorker cartoons who looked down on them and viewed everything they loved with contempt.

That past existed, I guess, but it was a lot longer ago than they think. The first time I got paid to write a movie review was in 1987, and for at least that long (and probably much longer) the so-called intellectual mandarins of the cultural sphere have desperately labored to embrace pop culture and mass-market tastes. Consult your local university library for a full list of all the dissertations about Madonna written in the ‘90s. Back when I still got invited to New York magazine parties, I attended one where Tina Brown held forth at length on the cultural significance of “Hulk.” That would have been Ang Lee’s 2003 “Hulk,” by the way, an oddball misfire now remembered by approximately nobody.

That nagging insecurity within the pop-culture army is a hangover from the first half of the 20th century, pretty much. By 1948, we already encounter cultural-studies pioneers Theodor Adorno and Max Horkheimer, having fled the philistinism of Hitler, complaining that Americans were a bunch of brainwashed morons who thought jazz and Charlie Chaplin movies were art. Those guys were idiots, of course – I don’t mean in general, but definitely about that stuff.

If there is still a tiny clique of cinephiles who would rather see “Son of Saul” or “Phoenix” than “The Force Awakens” – and you can like both things, for Christ’s sake – and if the mere existence of such people and their continued willingness to raise their artsy-fartsy objections in print invades the safe space of those who long to bask in a uniform golden tide of Lucas-Disney-Big Brother adulation … well, where have we gotten to, anyway?

As for the review I personally wrote, I enjoyed watching “The Force Awakens” and I said so. I’m delighted to see so many people having a great time at the movies, and don’t begrudge anyone a second of it. I will be taking my kids this weekend, with no accompanying lecture about Godard or Heinrich Heine. I approached the task of writing about that film as I always approach Hollywood movies: Given that this is a corporate entertainment product with an enormous role to play in the symbolic economy of the moment, can I shed any light on how it functions, or on the nature of the story we tell ourselves about it?

That last part strikes me as the problem. To go back to Bukharin’s question, how would my death help Mr. Condo Salesman celebrate the cultural hegemony of “Star Wars”? Would it destroy the last remnants of cultural resistance, or dispel the lingering suspicion that someone somewhere, in an antique library armchair, is snickering at him? Would it banish whatever inward doubts he may feel about whether corporate-packaged fun for all is actually as much fun as it’s supposed to be, or is the only kind of fun? Well, of course not. Historians and biographers have puzzled over why Stalin kept that note in his desk to the end of his life: Was he just gloating over a fallen rival? I’ve never thought that. The question wouldn’t go away, and he never found an answer.