This is Colbert's real problem: Conservatives aren't the issue, it's mainstream America 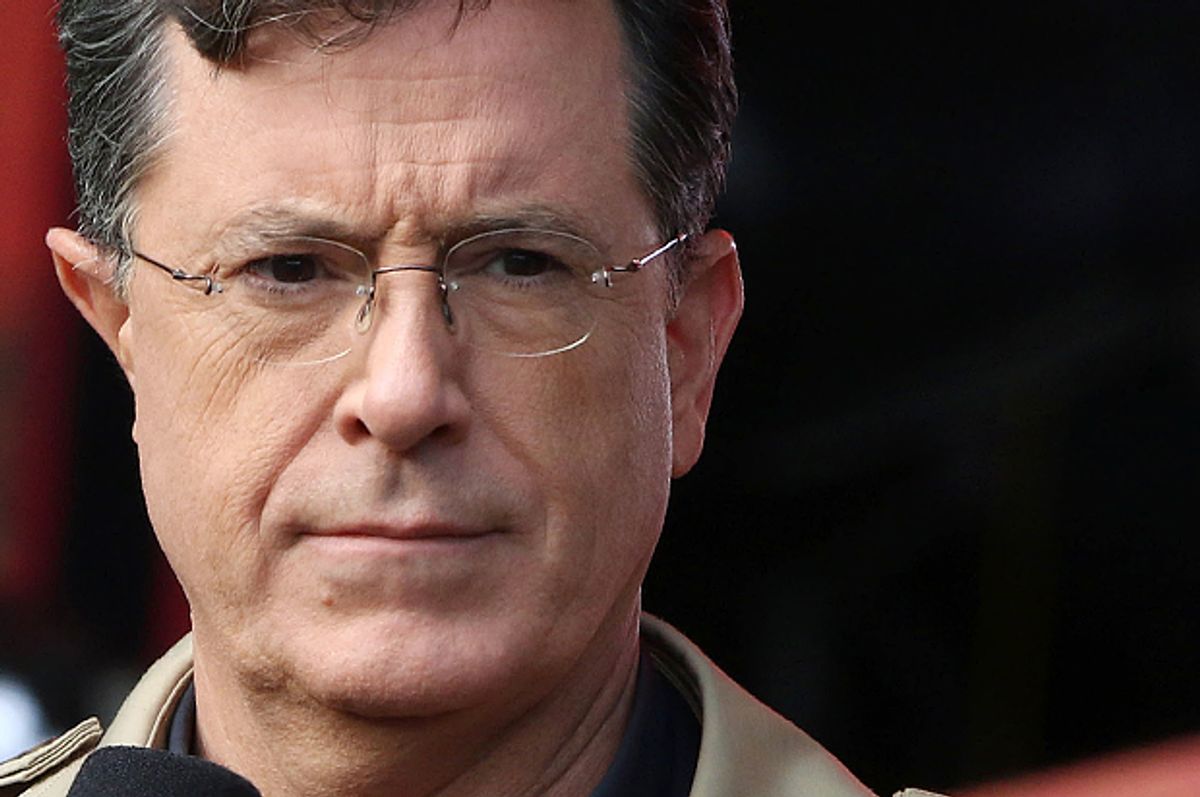 Stephen Colbert's "Late Show" keeps slipping in the ratings. In November, it even fell behind Seth Meyers who comes on an hour later than him.

My Salon colleague Sophia McClennnan suggested when Colbert slipped to third that it might have something to do with a Republican audience having problems with complex satire. While it's true that Colbert does get a little more advanced than the silly games you see on other shows, I would also propose that hosts Jimmy Fallon and Jimmy Kimmel are giving dumb Americans exactly what they want: pre-digested content that says nothing and doesn't make anyone mad.

Bill Carter, who has chronicled late-night brilliantly in books and in the New York Times for years, has a new Hollywood Reporter piece examining Colbert's problem and what some have called the panic inside CBS.

Several theories have been floated as to why Colbert's opening splash seemed to dry faster than expected. One veteran late-night writer calls him a very funny guy doing a quality show, but "maybe too smart for a mass audience?" Another longtime producer says, simply, "He needs to be more commercial, more social media friendly."

Some speculate Republican viewers have tuned Colbert out, given his Colbert Report incarnation as a blowhard conservative. (A THR poll showed Colbert's audience is only 17 percent Republican, as opposed to 33 percent for Kimmel and 31 percent for Fallon.) Or it simply might be a case of a big talent trying to find footing on a new dance floor. Colbert placed an early emphasis on serious interviews, like his memorable exchange with Joe Biden, but the focus of late seems to be shifting away from talk and toward performance.

He went on to note that:

What has surprised some Colbert fans — including this one — is that he did not fashion surefire pretaped bits for his early weeks. Few of his segments truly have exploded on YouTube, and that might be contributing to the perception that he is not breaking out as many expected. Fortunately, Colbert will get a big platform after CBS' Super Bowl broadcast in February.

As McClennan also noted, that earlier poll published by the Hollywood Reporter blames Colbert's ratings slump on his GOP problem. "Only 17 percent of Colbert’s viewers are Republican compared to 31 percent for Fallon and 33 percent for Kimmel."

Kimmel clearly has the GOP crowd locked in where Fallon has a decent balance in pulling in both parties. Republicans hate Colbert and some believe it's because he spent so many years mocking the GOP and brought such "jiggery-pokery" with him to CBS. Are Republicans punishing him by not watching?

Like most explanations in Hollywood or on Wall Street, these number studies are all highly paid, surface-level guesswork. If you dive deeper, you discover that Colbert has had more political guests than both of the Jimmys combined. Just counting elected officials and candidates for office, Colbert wins with 11 since September. During that same time, Fallon had four and Kimmel just one. That doesn't even count news personalities, and Colbert even had a colonel and Medal of Honor recipient to discuss what a ground war would look like if the United States went after ISIS. These are complex issues Colbert is dealing with while Fallon is lip-syncing.

But here's the important number: Each political leader Colbert has had on the show brings with it a 28 percent increase in ratings for both left- and right-leaning viewers. Similarly, saying Colbert's political approach to the show is what is hurting him doesn't hold water when you look at hosts like James Corden and Seth Meyers, both of whom rock some political humor. Nearly every night Corden is making fun of Republican politicians, typically Donald Trump, and Meyers' "Closer Look" segment is just as political as John Oliver's big final segment on his Sunday evening show. So if he's on the move over Colbert, it's not because conservatives are punishing the CBS host.

Complex political issues are oftentimes difficult to handle when you've been dealing with the doldrums of life from 9 to 5. Turn on the news and you hear the daily horror and the shooting du jour, and for some, the last thing you want to end the day with is an interview with Ted Cruz. The problem with this kind of thinking is that it contributes to the dumbing-down of the American public. Strong, thoughtful content and interviews are like telling viewers to eat their vegetables.

But then there are problems even the funniest comedian couldn't laugh their way out of. CBS isn't all that well known for being tech savvy. Only in the last few years did they start offering a streaming video option and Colbert's show isn't on it or on services like Hulu. If you want to see "The Late Show" when it's on, you have to have an actual TV, something many millennials go without. For those who view the late shows the following day, CBS doesn't make it easy to find it online.

The other factor here is that Colbert is likely held to different standards than Fallon and Kimmel. Back in the day, networks needed their late-night programming to launch them into successful morning shows. The thinking was that people would turn their TVs off at night and it would be on Carson -- and the next morning they would turn them on and be tuned to the "Today" show. Late-night hosts were on the hook for holding people to help give a boost to morning shows and that programming makes an obscene amount of money. These shows are several hours of programming that have tons of sponsors, product placement as well as advertising. Both NBC and ABC have huge morning shows that are done like massive productions with concerts, Web engagement and top guests booked. The CBS morning show, co-hosted by Charlie Rose, seems to exist for a different reason than mass audience. It's entirely possible CBS also wants Colbert for a more microtargeted audience that has more education and higher income for a specific type of ad sales.

As much as I hate to admit it, Colbert also has some complications with the show itself. I've been a Colbert watcher from day one on Comedy Central. Growing up in a red state and hearing some of the absurd nonsense that comes out of politicians' mouths, I felt a special kinship with Colbert's mockery. Many audience members might have followed him there expecting a longer version of "The Colbert Report" and were disappointed when they got something different. While Colbert still has a segment of his show that is a throwback to the old show, it's still a totally different animal. His opening monologues are also a little watered-down and if there's one thing you learn in the South it's that the thing in the middle of the road is usually dead.

Additionally, some of the guests are about as zippy as a two-day-old piece of fried chicken, and the interview suffers as a result. The booking person needs to step it up.

Finally, there's Jon Batiste. The band leader has a special role in a late-night show. Think about Paul Shaffer as a sidekick, always there to pitch in to Letterman's quirky commentary between segments. He was a natural at using music as a joke itself. When Letterman had a zinger, Shaffer was there with the music to accompany it. Batiste isn't jumping in with little sound effects and engaging the way Shaffer did. Some nights he doesn't feel like a presence at all.

It took Larry Wilmore a little while to figure things out and now his show is hilarious. Hopefully, comedians like Colbert and Trevor Noah will find their footing.