Bernie Sanders vs. the world: How the political & media elite are trying to set him up to fail

After Saturday night's debate, it's more evident than ever that the senator from Vermont isn't getting a fair shake 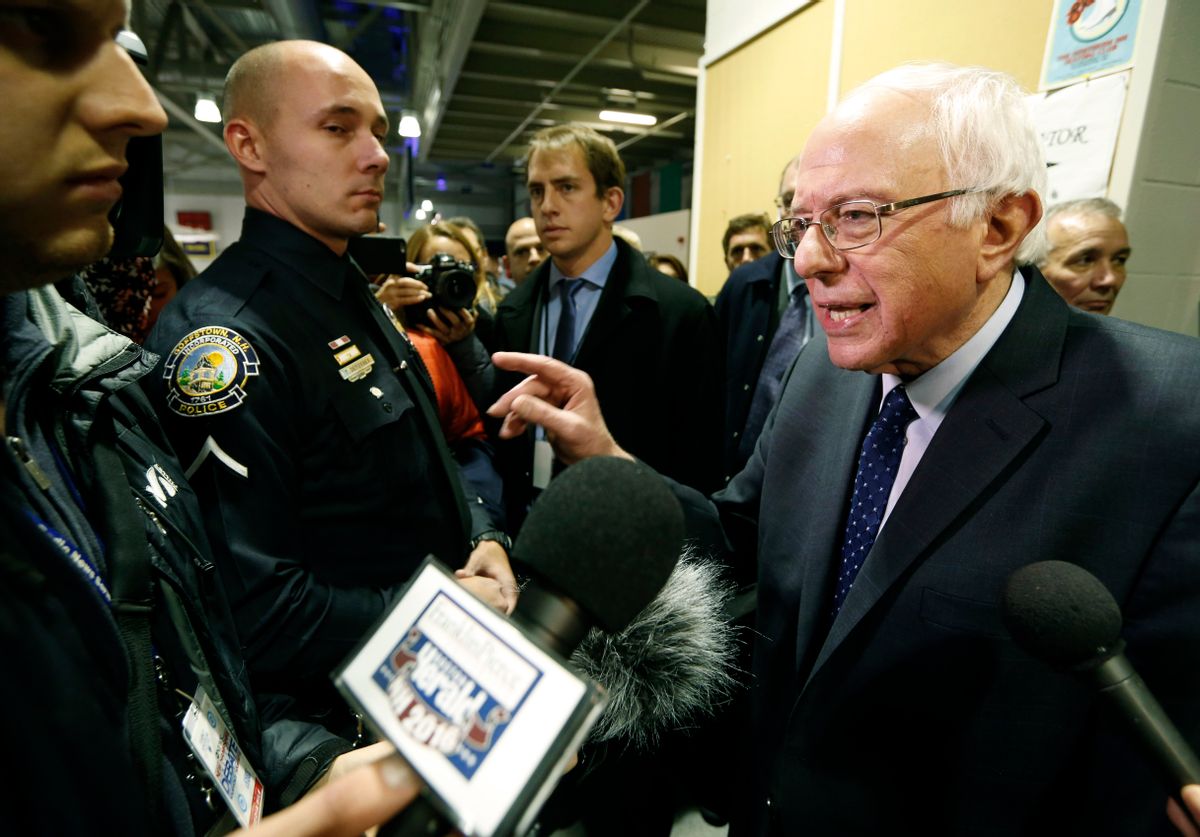 David Muir, setting up the first in an endless stream of questions about terrorism in Saturday evening's Democratic primary debate, of which he was moderator, reminded Americans that it was “just six days before Christmas, as we all know in this country. It’s typically a joyful time, as it is this year, as well. But it’s also an anxious time.”

The question at hand was not the age-old one of war or peace, or even, for that matter, the war on Christmas. After all, as Muir noted, Americans are united by their knowledge that it's almost Christmas. The critical uncertainty, rather, is what kind of war this country, which has been ceaselessly at war for 14 years, should fight.

“I’m going to ask the secretary [Clinton] here, because there does appear to be some daylight here between the policies, at least in respect to when you take out Syrian President Bashar al-Assad,” said Muir. “Right now or do you wait? Do you tackle ISIS first?”

More than a decade ago, media credulity fomented in the jingoistic afterglow of 9/11 made the case for the U.S. invading Iraq. In one notably toxic New York Times article, Michael R. Gordon and Judy Miller reported that Saddam Hussein had sought to obtain aluminum tubes that American officials— and anonymous ones at that—believed were meant to enrich uranium, ominously warning that “the first sign of a 'smoking gun,' they argue, may be a mushroom cloud.”

One year prior, the media cheered on the toppling of the Taliban government in Afghanistan with even less skepticism, failing to question the justifications for or consequences of a war that has turned out just slightly less disastrous than Iraq.

The Iraq War created ISIS, and the media helped create the Iraq war. Now, the media demands to know, what are we going to do about ISIS? Obama's relative constraint, the conventional wisdom goes, is not working. And now, as a result, the terrorists are once again at our door.

The San Bernardino massacre closely resembled the near-daily mass shootings typical to the United States. No matter. The shooting has been officially classified as terrorism so there is a general consensus that everything has now changed. Politics, reporters intone, is now all about national security. And that's mandatory. Political figures who persist in insisting that Americans do or should care about anything else will be declared out of touch. Irrelevant.

“Bernie Sanders Falls Behind in a Race Centered on Security,” the New York Times headline announced, seemingly unaware of their pivotal role in centering the race.

Hillary Clinton is a longtime supporter of the sort of militaristic foreign policy adventures that help to foment terrorism. Nonetheless, the Times reports, “all of this plays to Mrs. Clinton’s strengths — not only as a hawkish former secretary of state but also as a savvy politician who follows the public mood.”

This media diktat was first issued after Paris and had become conventional wisdom by the time a disaffected and ISIS-inspired county worker and his wife shot down coworkers in San Bernardino. Sanders has disobeyed orders, maintaining that poverty and global warming are the greatest threat to Americans. That this has the virtue of being true does not impress the arbiters of consensus political wisdom.

"In his opening remarks at the Democratic presidential debate on Saturday, Senator Bernie Sanders railed against 'establishment politics and establishment economics' and then the nation’s 'rigged economy.' He moved on to the 'corrupt' campaign finance system, then the 'planetary crisis of climate change,'" the Times yawned. "Only after that did he say he wanted to destroy the Islamic State. It was a litany of priorities that made good sense when Mr. Sanders announced his presidential bid in April. But after the terrorist attacks in Paris and San Bernardino, Calif., he made fighting terrorism sound like an afterthought."

History, in the guise of political reporting, is repeating itself. It's both farcical and terrifying.

It was recently reported reported that ABC's "World News Tonight" devoted 81 minutes to covering the Trump campaign this year compared to just about 20 seconds on Sanders. The media is unimpressed by these findings.

“Here's the thing,” the Washington Post's Callum Borchers writes. “Winning matters. While Sanders trails Hillary Clinton in the race for the Democratic presidential nomination by 23 points, Trump leads the Republican contest by almost 15. Trump looks like a real contender -- maybe even the favorite. Sanders, still, looks like a long shot.”

Borchers justified that take by comparing presidential politics to the NFL: sure, the Eagles and the Bears have the same record but the Eagles merit more coverage because they actually have a shot at winning their division.

Politics, of course, is not football. Political reporters must no doubt look at the practical dynamics of the presidential race: Who stands a good chance at winning, and why? But that's not close to everything that matters. The wisdom and ethics of policy proposals matter. And so does the bigger picture that a huge number of young people back Sanders while a population of older white people support Trump. Sanders represents the future of American politics. Trump represents the last gasps of the past.

This insight should not be left for historians to describe in retrospect. It matters right now.

The horse race approach blows Trump's frightening bigotry out of proportion, encouraging people both here and abroad to falsely conclude that Americans are far worse than they actually are. A large minority of Americans believe that Muslims should be barred from entering the country. That's scary. But more than a third of young people, according to a YouGov survey, view socialism favorably.

“while the media's priorities are comprehensible, the horse race fact that mainstream Democrats have consolidated around a single champion while the non-Trump Republicans remain badly divided is creating a distorted picture of the real state of the country. Wall-to-wall Trump coverage is, for example, helping boost morale at white supremacist groups, which are now benefiting from a newfound sense of momentum. But while there is clearly significance in the fact that a large minority of Republicans are willing to flock to Trump's banner and the cause of ethnic chauvinism, the reality that an equal number of people are flocking to Sanders's banner and the vision of an expansive Nordic welfare state is equally significant.”

It is no doubt true that, for some voters, rising public fears over terrorism plays to Clinton's advantage. But that narrative is also a creature of a media echo chamber that makes the Washington consensus into an historical inevitability.

Better political reporting is possible. Reporters could report on the hawkish views that prevail amongst much of the American electorate while still asking tough and objective questions about the country's longstanding militarism. But history keeps on repeating itself, a problem for which those who write its first draft bear great responsibility.