2015: The year in political theater, from Trump to ISIS — and then there's the scary stuff

Was the political spectacle of 2015 about something more than terror, panic and a certain real estate mogul? Maybe! 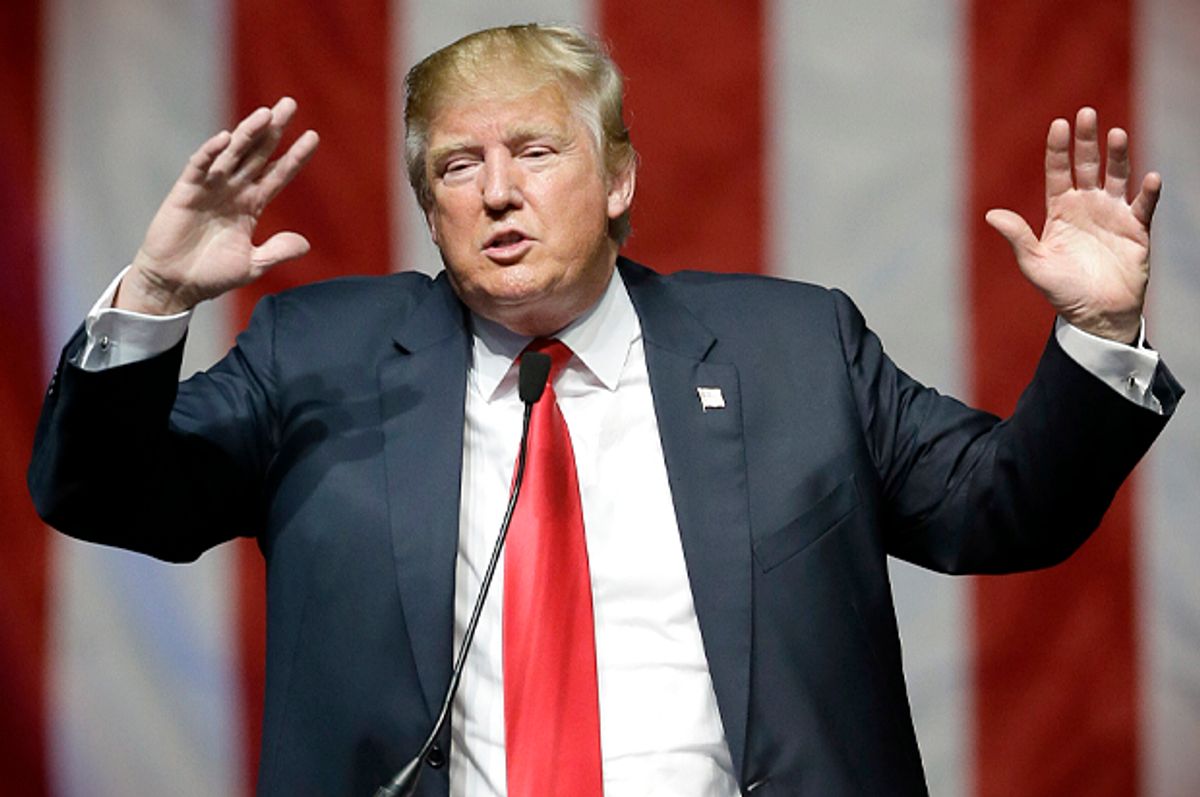 You might think that any discussion of 2015 as political theater begins and ends with Donald Trump, with a whole lot of cheesy Trump-burger stuffed into the middle and rich, chocolatey Trump sauce poured over the top. You would not be entirely wrong. If we understand Trump’s presidential campaign as a performance—and, honestly, how can we do otherwise? Every single one of the thousands of articles published this year about the irresistible rise of this impossible candidate begins from the presumption that it’s a performance first, and other things later. So if we start there, Trump is all-purpose tragicomedy, a guy playing King Lear and the Fool and Henry V and, I don’t know, the moronic cop from “Much Ado About Nothing,” all at the same time. He’s the clown in the circus and also the lion, the diabolical ringmaster and also the guy in a silk hat who’s buying the circus and tearing it down to build another ghastly condo tower.

Addictive as the Trump spectacle may be, if we stop there we have essentially surrendered to the Trumpian worldview, which holds that only the spectacle of politics matters, and the substance is illusory or nonexistent. That’s a salutary perspective in many ways, but politics is not just about the gang of idiots who run for elective office. They’re the stars, but not the writers and directors. And political theater can mean much more than empty pandering. It can be an instrument for change, beneficial or otherwise, and we saw that in 2015 as well.

As the year began, the nation was captivated by political theater of a very different kind, diametrically opposed to Trump-mania: the wave of Black Lives Matter protests that rippled outward from Ferguson, Missouri, after the death of Michael Brown the previous October. Whether the activist outrage of BLM has accomplished meaningful change, and how much, remains to be seen. But there’s no doubt that the movement and its moment at least temporarily focused national attention on an issue many white people had actively avoided confronting. The role played by BLM protesters as cop-killing, America-hating villains in the fantasy universe of Bill O’Reilly and Sean Hannity makes that clear enough.

BLM and its causes certainly did not disappear as the year progressed, and the street theater of Ferguson and Baltimore helped to galvanize racial protests that upended the normal social order at the University of Missouri, Yale and numerous other colleges and universities later in the year. But we’re getting ahead of ourselves. BLM was abruptly shunted off the stage late in January by another form of radical political theater whose goals are nebulous, but do not include democratic social reforms. I’m talking about the Charlie Hebdo attacks in Paris, which fundamentally defined the character of 2015, and whose consequences go far beyond anything Donald Trump has ever done or will ever do.

Is it obscene to consider the crimes of ISIS, and those of its acolytes and copycats, as modes of political theater? I don’t think so. The fact that real people died does not mean that those events had no symbolic power; the true object of terrorism, after all, is not the people who are killed but those who are terrorized. Even in bringing this up, I’m compelled to fend off the notion that ISIS is the most terrifying thing in human history, or at least the very worst thing in the world at this moment. That testifies to the would-be caliphate’s enormous success as theater. With a handful of gruesome YouTube videos and two murderous attacks on the cultural capital of Europe, ISIS has provoked a worldwide reaction grossly out of scale to the actual danger.

Unlike al-Qaida, whose symbolic messaging was always hokey and tedious—Osama riding his stupid charger, or delivering endless lectures on websites apparently designed in 1991—ISIS is a cultural phenomenon hatched within the Western media spectacle itself, like the monster in “Alien.” It looks menacing in large part because its political agenda is nonsensical, and isn’t even really an agenda. (By contrast, al-Qaida’s goals were coherent if unachievable: Western withdrawal from the Muslim world, and the defeat or destruction of Israel.) The Islamic State is a non-state, with none of the desires or behavior patterns of normal states. It doesn’t want to sign treaties or forge alliances or exchange ambassadors, not with Western nations, not with Russia or China, and least of all with its Muslim neighbors. Its only vision of the future is the Islamic zombie apocalypse, which is above all a theatrical vision drawn from the deepest nightmares of Western philosophy and psychology.

In political terms, Trump benefited immensely from both Paris attacks and the thematically related mass shooting in San Bernardino. Whether or not he actually appears in an ISIS recruitment video, his theatrics and those of the would-be caliphate reinforce each other in a toxic feedback loop. With the resurgence of youth activism exemplified by BLM, the campus protests of early fall and the Bernie Sanders campaign, we can perceive glimmers of a more promising Third Way in political theater, a possible pathway through the swampy morass between Trump and ISIS. (It’s something like the Dead Marshes in “Lord of the Rings,” with ghostly faces—Joe McCarthy, Adolf Eichmann, Vlad the Impaler—leering in the stagnant water.)

There are always minor players to consider, the ones who strut and fret on the national stage for 15 minutes (or less) and then are heard no more: Ben Carson had his moment of mild-mannered cluelessness, and Carly Fiorina looked like the thinking woman’s conservative candidate for a split second, until she was revealed as a pathological liar even by Republican standards. Lindsey Graham barely bothered to treat his own campaign seriously, and I miss him already. But the actors to watch out for are always the ones who appear not to be acting, and who announce that their performance is not a performance at all. (According to Jesse Eisenberg, Al Pacino once gave him the following advice about acting in the movies: “Just because they say ‘action’ doesn’t mean you have to do anything.”) Bernie Sanders’ garrulous anti-charisma is a key aspect of his appeal, while his principal Democratic opponent is a woman famous for being devoid of warmth and inept at retail politics.

If Hillary Clinton’s performance persona is that of the banker who’s about to turn you down for a loan, while Sanders is the grandpa you just awakened from his nap, they are struggling to outdo each other in earnestness and sincerity, as if those qualities could not possibly be packaged or rehearsed. Across the aisle we have a dark horse Best Bad Actor contender coming up on the outside: Ted Cruz, with his Peter Parker haircut, his weaponized daughters and his pristine Western wear ensembles, which appear to have been purchased by his mother for the first day of school. Cruz delivers Trump’s paranoid-fantasy dialogue in the manner of an irritable suburban drama teacher telling his charges for the love of Mike not to leave their costumes lying on the floor. ISIS won’t want him for the recruitment video; he’s just too creepy. We can only hope Americans agree.