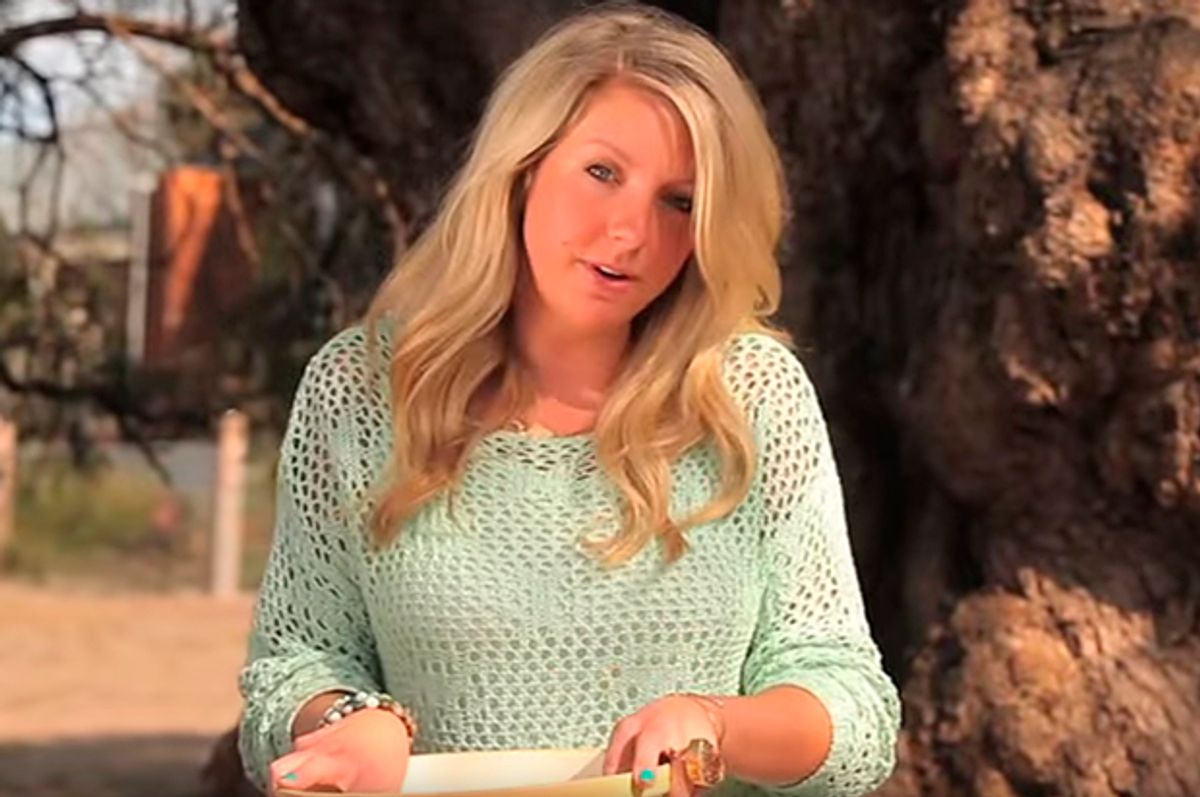 It's a telling duo of social media announcements, posted less than two hours apart. First, on December 26, Australian nutritionist Lola Berry posted the exciting news: "STOP BEING A FAT B_TCH!! It's here!!! My first ever 4 week weight loss plan! Launching now!!" She also linked to her site of the same name, and, in an unfortunate attempt to go viral, tried to make #StopBeingAFatBitch a thing. And then soon after, as anyone who knows how these things go, she was apologizing. "I'm really sorry the name of the eating plan has upset lots of people, that's not my intention at all," she declared. "The whole point of it was to evoke a change in self talk, but I can see how it's too strong and I'm sorry for that. The content is all about changing your mindset to achieve your health goals. So, I would love you guys to name it. What would you like it to be called?" Uhhhh, something other than "Fat B_tch"?

Berry also issued a video apology, in which she admitted, "I call it that because it's something that I've called myself, and I thought that people might relate to that. But the only thing I've caused is hurt, and I'm so sorry." As evidence of her intended context, she shared the first two pages of her four week plan, in which she explains what she perhaps thought was a critique on body shaming instead of what it appeared to be — just regular old body shaming. "I promise you that while you're self-hating it'll be almost impossible to get results," it reads. "You choose your mental dialogue; is it 'Stop being a fat bitch,' or is it, 'I am a healthy beautiful thriving human who is living their dreams?" Or maybe it was meant as a hopeful nod to the runaway decade of success of the bonkers advice and the mean girl voice of the "Skinny B_tch" empire?

As one of her more restrained Facebook commenters put it, "Reinforcing the horrible stuff people say to themselves daily, seems to very much be the opposite of what I assume you're trying to achieve!" Another more efficiently suggested, "stop calling yourself a fat bitch." Others were more cynical, calling the plan's name a "Lame attention seeking program to make a buck," and observing, "#stopbeingafatbitch actually achieved its aim. The amount of people now aware of it has skyrocketed." As another person on Twitter mused, "I smell giant PR plan. And its smells really bad."

It's certainly true that headlines around the world took note of Berry's gambit, questioning whether it was "derogatory towards women." Any notoriety is good notoriety, right? Especially when, based on her site, Berry's actual recipes and food plans don't sound strikingly innovative or even all that good. And frankly, it's unnerving when someone who dubs herself a nutrition expert peppers her writing with phrases like, "We all want to be slim, so this a great one when it comes to making your metabolic rate nice and fast."

The idea of a slender blonde woman tossing around the word "fat" as a fast track to attention is not without precedent. Earlier this year, Nicole Arbour achieved instant fame — and near universal loathing — when she posted a "comedy" YouTube clip addressed "Dear Fat People." But speaking with Cosmopolitan last week, Arbour insisted it was all part of the grand plan. "There's been tens of thousands of dollars just from that one specifically," she claims. "It's changed my life financially. I've got a bunch of really cool TV offers coming my way right now, and lots of sponsors coming to me to make cool videos for them, branded content for them or ad campaigns for them. Just lots of stuff coming in." And all she had to do was be mean to a large group of people for being physically different! Writer Kate Storey says that "Arbour's claim that she made thousands of dollars off that single video is likely legit," even though she also points out that becoming a hate watch star can backfire on a person looking for any real career durability. And while Berry's "Fat B_tch" strategy may not have had the obvious stench of trolling that Arbour's did, it nonetheless does seem to have the whiff of massive insensitivity. And if you're preaching health and trying to win fans, that's a big fat no no.