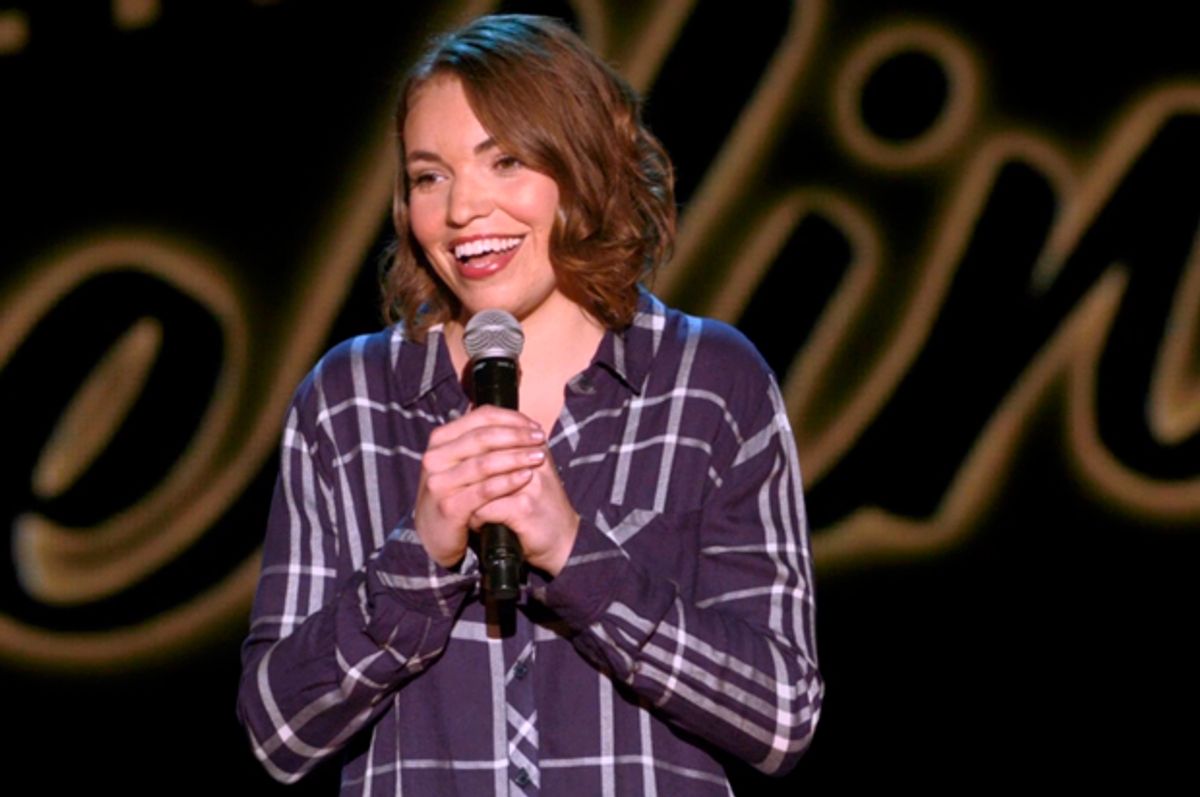 When someone has the courage to come forward with a story of physical or sexual abuse — or both — it's not always easy to know how to respond in the most supportive and respectful way possible. It requires sensitivity to what that person wants to come from the disclosure. But here's a good first step: Don't make it about you and what you need.

On Monday, Beth Stelling, who has had a banner career year and who Vulture recently dubbed "a young comedian to watch," posted a shocking image on Instagram. It was a quartet of photos: one of her smiling and holding a microphone, and three of her limbs, covered in bruises. "Same girl in all of these photos (me)," she wrote. "I've had an amazing year and you've seen the highlights here, so these photos are an uncommon thing to share but not an uncommon issue…. When I broke up with my ex this summer, it wasn't because I didn't love him, it was because of this. And I absolutely relapsed and contacted him with things I shouldn’t have, but there are no 'best practices' with this. When friends or comics ask why we broke up it's not easy or comfortable to reply; it doesn't seem like the appropriate thing to say at a stand-up show, a party or a wedding. It's embarrassing. I feel stupid. After being verbally, physically abused and raped, I dated him for two more months. It's not simple." Stelling went on to state, "After I broke up with him he said, 'You're very open and honest in your stand-up, and I just ask that you consider me when you talk about your ex because everyone knows who you're talking about.' And I abided. I wrote vague jokes because we both live in L.A. and I didn't want to hurt him, start a war, press charges, be interrogated or harassed by him or his friends and family. I wanted to move on and forget because I didn’t understand." It seemed a continuation of a message she'd hinted at back in October, when she tweeted, "I was my ex-boyfriend's best quality. Pls RT."

The response has been immediate and deeply supportive. John Hodgman praised her "profound courage"  Rachel Bloom said, "I am in awe of @BethStelling," and Kumail Nanjiani said, "This makes me feel many things but chief among them is that @BethStelling is awesome & I'm happy we are friends." Megan Amram added, "@BethStelling is my hero." But though Stelling has made it clear many people in and out of the industry know who he is, she did not name her ex. And this has proven very frustrating for some.

"Nothing brave about not saying who the abusive ex is," wrote one commenter on HuffPo. "Covering up for him is going to allow him to find his next victim." Another chimed in, "Who is this guy? I think he should be named to help other women avoid him at all costs." On Variety, another commenter said, "If he is a serial rapist and abuser, which I am guessing he is, then he should be exposed with his name. What he told you he has also told the other women he has abused. Time to shine the spotlight on him." Perhaps sensing what was coming, the comic widely assumed to be Stelling's abuser appears to have quickly deleted his social media accounts on Monday. A search of his name on Twitter, however, quickly turns up mentions that he "rapes and tortures women," messages that "Everyone should know so they don't support him or his comedy," and warnings that "We ain't stopping til we find you. Sleep tight pal :)."

Yet as author Sara Benincasa helpfully explained on Monday, "I get the urge. I've been the reactionary person who wants to kick somebody's ass or make their life hell because they hurt somebody I cared about or admired. Guess what? I didn't fix anything and I just ended up hurting the person I loved, all over again. Personally, when I talked about abuse in a public setting and people were like WHO IS HE? LET'S KILL HIM! it just upset me and scared me and caused stress and drama for people I loved. It made the whole experience of telling the story almost more traumatic than the event itself. So until you get the go-ahead from somebody to cowboy up and be a Wild West West hero aka the great Will Smith, settle down and just be a support, an ally, and a friend. If you have to do something, make a donation to a group that helps abuse survivors in your area."

In a year in which women have come forward to accuse porn star James Deen and comic Bill Cosby of abuse, others still have a right to make different choices in how they share their experiences. If Stelling wants to disclose more details about her ex, that's for her to decide. It's not a job for the Internet justice league. And supporting Stelling's choice to reveal her abuse means supporting every aspect of that choice, including, for now, what details of her story she wants to disclose. In her Instagram post she explained, "I don't want revenge or to hurt him now, but it's unhealthy to keep this inside because my stand-up is pulled directly from my life." And that's enough.