If, as the prosecutor said, officers followed policy in the killing of Tamir Rice something is horribly wrong 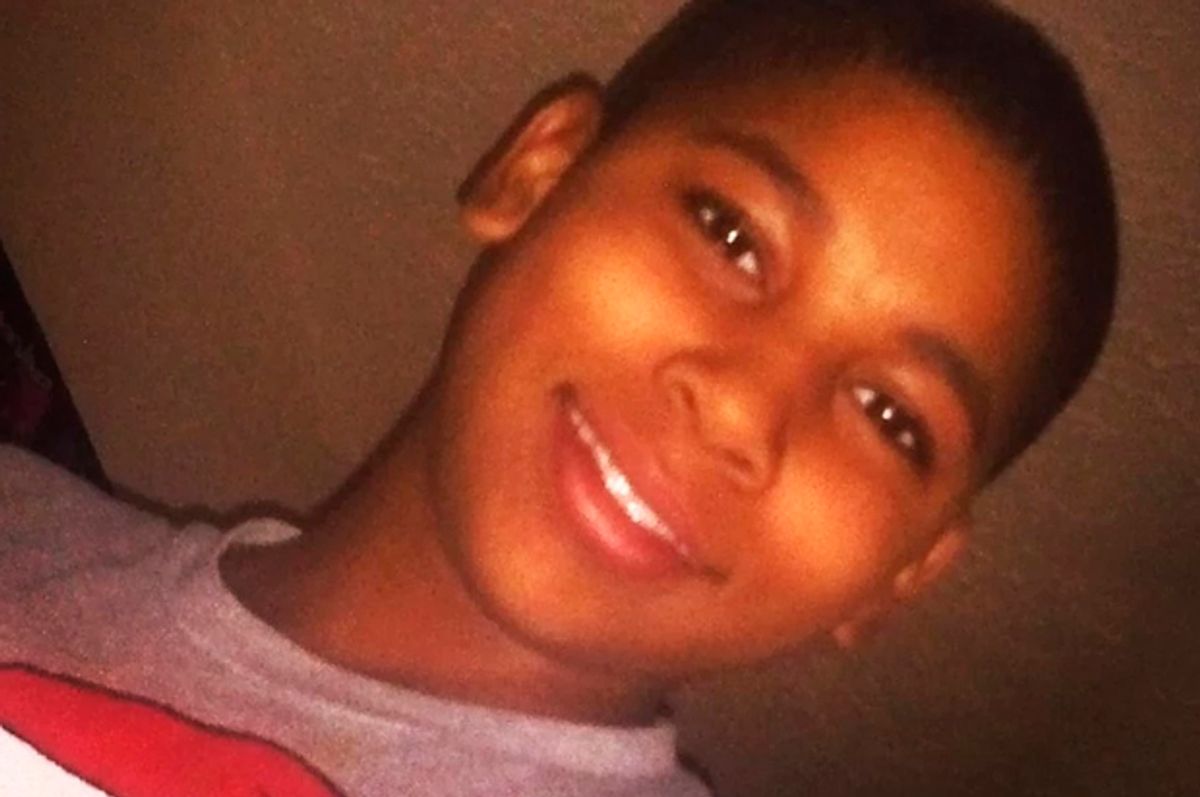 The decision to not indict officers in Tamir Rice's death has understandably sparked outrage. But if the officers didn't commit a crime, then the conclusion to be drawn is actually far more radical and serious: institutionalized policing practices and policies killed a 12-year old child.

Even Cuyahoga County Prosecuting Attorney Timothy J. McGinty readily concedes that Rice should never have been shot dead. McGinty found, however, that Cleveland Police Officers Timothy Loehmann (the shooter) and Frank Garmback (the police car driver) did not commit a crime because they reasonably (if in retrospect falsely) believed that Rice posed a dangerous threat: they had a report that a man was pointing a gun at people; Rice's pellet gun looked like the real thing; and a video shows that he was reaching for it.

That last point is disputed. Roger Clark, a policing expert retained by the Rice family, found that the 1.7 seconds it took for Officer Loehmann to shoot Rice, after jumping from his car, was nowhere near enough time for Rice to pull the gun, or for the officers to have issued any intelligible commands — let alone for Rice to have responded to those commands.

But if McGinty's argument is accurate — that the two officers reasonably believed that Rice posed a threat — that absolves neither the Cleveland Police Department nor American policing as a whole. To the contrary, it indicts them: if the officers followed policy in confronting and then killing Rice, something is horribly wrong.

As Clark notes, multiple failures precipitated the shooting, including the fact that the dispatcher did not inform officers that the 911 caller reporting Rice had stated that he was “probably a juvenile” carrying a gun that was “probably fake.” But that fact, he writes, “is irrelevant” as to explaining why Loehmann decided “to jump out with his gun drawn and immediately open fire within 1.7 seconds at a person he could not be sure was the subject of the dispatch.”

More serious than the fact that critical information was not passed along, Clark suggests, are the actions Loehmann and Garmback took before the shooting. If the officers had “followed proper police practices and were at a safe distance, with cover, and communicating with Tamir, then they would have been able to assess whether or not he was actually reaching for a gun and that he was actually a 12 year old boy with a toy gun,” writes Clark.

Instead, the officers quickly drove to just feet away from Rice, who was sitting alone, putting themselves in the sort of close and dangerous proximity, with limited information, that created the very sort of (it turns out false) threat that would legitimate the use of lethal force.

McGinty, however, said that these questions don't matter, writing that “the actions of the officers during the events leading up to the deadly force encounter” are not legally relevant to evaluating “the split‐second judgments made immediately before the deadly force incident.”

That may be true. But McGinty still makes a point of defending the officers' response, arguing that it comported with policy: The Cleveland Police Department in 2011 enacted an active shooter policy, he notes, that mandates “officers responding to an active shooter incident shall have the authority to and shall attempt to make immediate contact with and stop the active shooter.”

The trouble, as a good friend of mine discovered earlier this month while walking through downtown Chicago, is that police often don't get it right: my friend, Erik Cameron, suddenly found a police officer pointing a gun at his head and demanding that he drop his cup of tea. They had the wrong guy. But if he had made a wrong move, and perhaps if he hadn't been white, he wouldn't have been writing a chilling essay about the frightening incident on Medium once it was over.

McGinty, however, defends American police's troublemaking tactics, dismissing the argument that police officers can be blamed for having “recklessly created the circumstances that led to the deadly confrontation."

"Other than random attacks, all such cases begin with the decision of a police officer to do something, to help, to arrest, to inquire,” the report quotes from a 1996 6th Circuit Court ruling. “If the officer had decided to do nothing, then no force would have been used. In this sense, the police officer always causes the trouble. But it is trouble which the police officer is sworn to cause, which society pays him to cause and which, if kept within constitutional limits, society praises the officer for causing.”

McGinty may be right about the legal precedents. But he is wrong if he thinks that the police tactics that emphasize causing trouble are a good idea.

The New York Times recently reported on a trip made by curious and somewhat incredulous American police officials to Scotland, where police emphasize “tactical withdrawal” over fast confrontation and are taught that “calming a situation through talk, rather than escalating it with weapons, is an essential policing tool.” If American police were trained to be peacemakers instead of cowboys, it is hard to imagine how a 12-year old boy with a toy gun would have ended up shot dead in the park.

As Ta-Nehisi Coates wrote in October, “At some point the discussion of police violence will have to move beyond the individual actions of officers to the level of policy.”

In Baltimore, State's Attorney Marilyn Mosby has been criticized for casting a wide net in filing tough charges against six officers who allegedly played a role in Freddie Gray's death. The hung jury and mistrial in the first case, against Officer William Porter, confirmed what many legal experts predicted: the charges will be very difficult to prove beyond a reasonable doubt.

The legitimacy of the criminal justice system is for many increasingly determined by its ability to find police officers who shoot people dead guilty of murder and send them to prison for decades or life. This is understandable. Nearly one thousand people were shot and killed by American police this year, as the Washington Post reports. Precious few officers were tried and fewer still were convicted.

There are no doubt many instances when officers break the law by beating, shooting and lying.

Mosby has been celebrated by some and condemned by others for her decision to bring charges against the officers. What's received less attention is that Mosby's office, whose job primarily consists of sending Baltimore residents to state prison, personally requested a heavy police presence on the very corner Gray was chased from, The Baltimore Sun reports. Mosby's office, responding to neighborhood complaints, had directed police to target the corner with “enhanced” drug enforcement efforts.

Injustice is a feature, and not a bug. America has a formidable gun culture, and an enormous number of guns. The country has extraordinary poverty concentrated in segregated neighborhoods, and lots of street violence. Americans use a lot of drugs and, because many drugs are illegal, a large illicit market to feed narcotic appetites. American politics has for decades fruitlessly tried to solve these problems through mass incarceration and aggressive policing. Police officers are on the front lines of a war created by politicians.