Warren Buffett is a phony: Every liberal's favorite billionaire is actually cut-throat, not cuddly

Buffett's brand is progressive, and Democrats love to bask in his endorsements. The reality is very different 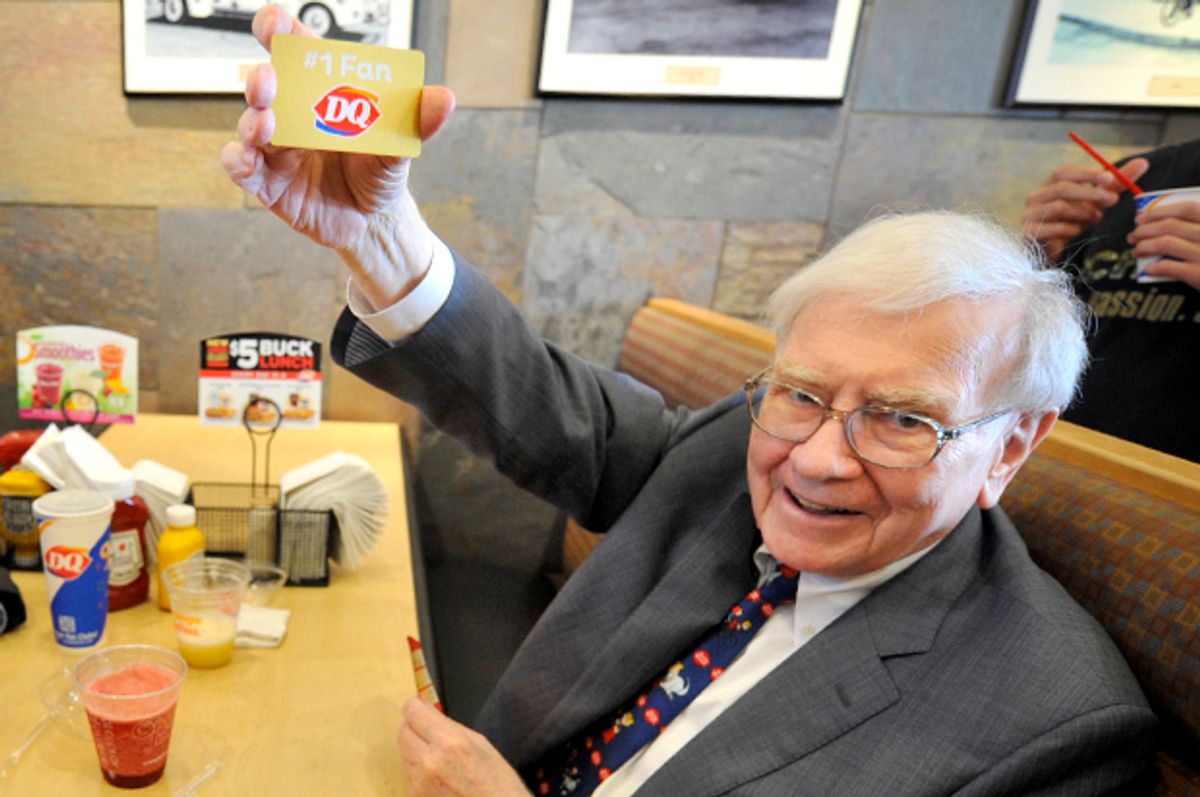 In 2008, when Barack Obama needed a general election validator to soften the liberal edges played up by his opponents, he touted an endorsement from Warren Buffett in his first national ad. A couple weeks ago, Hillary Clinton campaigned with Buffett in Nebraska. Congressional Democrats use him as an identifier for their signature tax policy, the Buffett rule.

When the Democratic Party wants to prove to the nation – or maybe to the media – that they have non-threatening, common-sense, middle-America values and ideas, they turn to the Oracle of Omaha. Maybe it’s because he doesn’t map culturally as a liberal. He’s rich! He’s a businessman! He’s from flyover country! And yet he wants to pay a higher tax rate than his secretary! (Mind you, he doesn’t right now, but his heart is in the right place, I suppose.)

Because this narrative is forged in steel, it doesn’t seem to bother any Democratic strategist that their go-to supporter has spent the past couple of years evading taxes, ripping off poor people and minorities, and throwing up roadblocks to renewable energy. Warren Buffett the cuddly icon doesn’t match Warren Buffett the ruthless capitalist, but they’re the same person. And the question Democrats must ask themselves is: At what point do they stop swooning over this guy?

Buffett’s company Berkshire Hathaway owns Clayton Homes and Vanderbilt Mortgage, the nation’s largest mobile-home empire and its companion predatory lender. An investigation by the Seattle Times and BuzzFeed over the weekend detailed Clayton and Vanderbilt’s schemes.

Clayton Homes targets minority communities with advertising and high-pressure sales tactics. Those borrowers are led to believe that only Vanderbilt can finance their mobile home purchases. Then, Vanderbilt issues them loans swollen with thousands of dollars in hidden fees. And black, Native American and Hispanic borrowers receive far higher interest rates than their white counterparts, even if the white borrowers earn less.

One Latina woman received a loan at 14.2 percent after being approved at 8 percent. They didn’t even translate the mortgage documents into Spanish or provide an interpreter, after making the sale based off Spanish-language ads. When loans like this inevitably fail, Clayton repossesses the home and resells it, marking up the price and earning more in fees each time.

These discriminatory tactics match a chronic problem inside Clayton’s offices, with seven documented court cases from workers alleging racism on the job. As Clayton’s customers are increasingly non-white – nearly one in three last year, compared to one in five in 2008 – the company obviously finds gouging minorities extremely lucrative. Clayton made more than $500 million in just the first three quarters of 2015.

This is not the first major mortgage fraud investigation targeting Buffett’s mobile-home business this year; the same reporting team detailed other underhanded Clayton/Vanderbilt tales back in April, stories of high-cost lending that traps borrowers. Buffett publicly defended the businesses in May, saying, “I make no apologies whatsoever about Clayton’s lending terms.” Buffett even tried to disparage the credibility of one of the investigation’s reporters, because his sister worked at a law firm that sued home lenders, including Clayton. The company called the most recent story “activism masquerading as journalism.”

But Buffett’s home lending business isn’t the only red flag. NV Energy, a Nevada power company, just profited greatly from a ruling by the state’s Public Utilities Commission. Previously, NV Energy had to pay individual homeowners who installed solar roof systems “net metering” credits for feeding electricity back into the grid, to encourage the adoption of renewable energy. The Nevada PUC cut those payout rates by 75 percent, and increased fees on homeowners to connect to the larger system. The new rates will retroactively apply to 12,000 solar customers who put up the systems while expecting the prior benefits.

This ruling drove SolarCity, the largest rooftop solar installer, to abandon one of the nation’s sunniest states. While Politico characterized the fight as one between Harry Reid and the Koch brothers, it’s Buffett’s company that profits the most from halting rooftop solar adoption.

Buffett does not even follow his own populist guidelines on taxes that national Democrats love to parrot. His business model of buying companies and canceling their dividends shields most of his net worth from taxable income. Berkshire Hathaway’s deferred tax liabilities total around $61 billion, money owed but not yet paid to the government. He has used stock splits to buy companies without paying taxes on the acquisition, like the 2014 purchase of Duracell, which saved him $1 billion. And Buffett provided financing to a high-profile merger between Burger King and Tim Hortons, done at least in part to save on taxes, even if it wasn’t a classic “inversion” deal to move a corporate headquarters overseas.

Warren Buffett may be a charming guy in person. The spectacle of a billionaire who drinks Coke and eats potato sticks every day is surefire media catnip. But Buffett’s drive for profit comes at the direct expense of key elements of the Democratic coalition, from environmentalists to minorities. Yet Hillary Clinton and Barack Obama and the DNC wear his endorsement as a badge of honor. This may not be toxic right now, but it’s only a matter of time if the headlines pile up.

In the post-Citizens United age, politicians would be stupid to push away a wealthy donor. But they also don’t have to go out of their way to plaster that donor’s name all over their advertising. I’m sure Clinton wouldn’t campaign with Lloyd Blankfein or David Koch. Warren Buffett’s brand sets him apart, but the style of capitalism he practices doesn’t. There’s nothing unique or benign about how Buffett’s money is made and who loses in the equation. Either Democrats are so desperate to have a billionaire validator that they overlook these flaws, or they sincerely believe in how Buffett earns his fortune. Either one isn’t exactly flattering.