From "BoJack Horseman" to "The Leftovers," here are the 10 best shows of the year 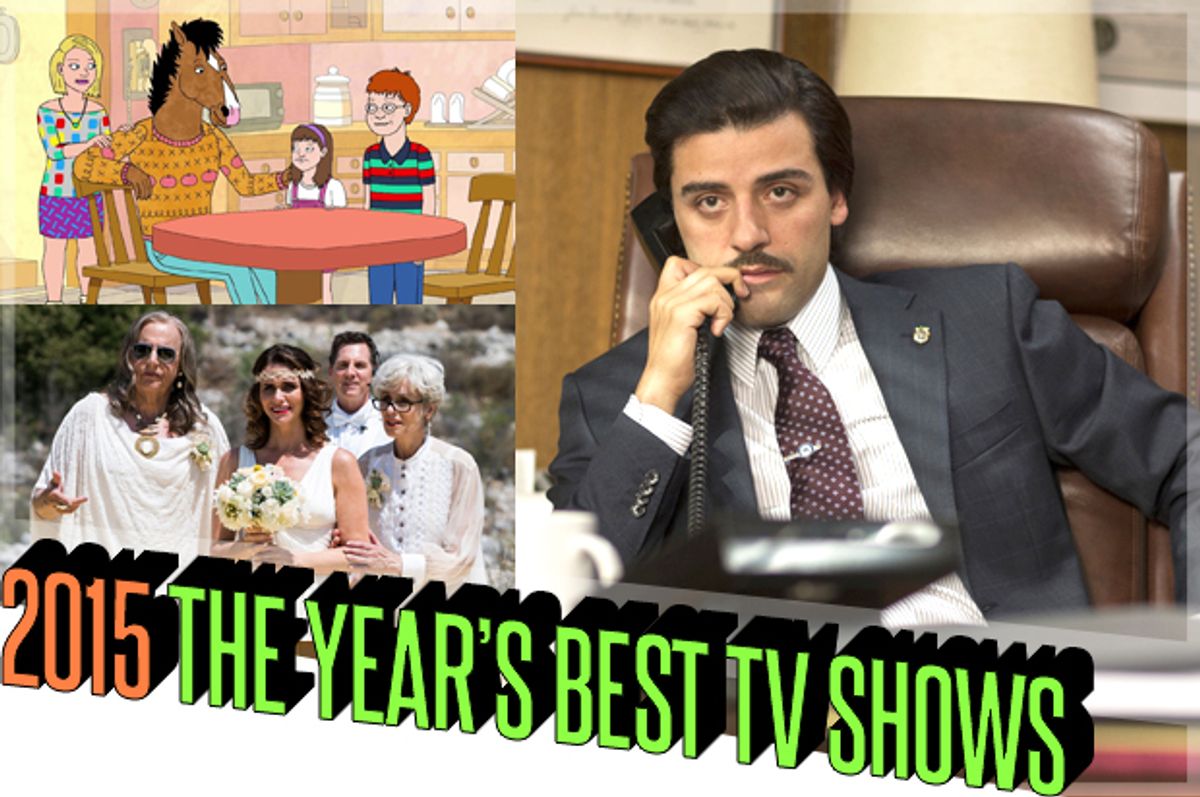 This year was the year this little Comedy Central sketch show became must-see TV, as creator and star Amy Schumer’s facility for exposing the hypocrisies of life as a woman in this world. Some of the show’s imaginings, like “Last Fuckable Day,” have become part of our lexicon. Some, like the sketch where Schumer plays a character with three buttholes, are just hilarious. And the season’s third episode, “12 Angry Men Inside Amy Schumer,” is one of the most brilliant episodes of the year. In terms of sheer virality alone, “Inside Amy Schumer” earns a spot on this list.

“Mr. Robot” was beset by an obscure title and a marginal network, but that couldn’t stop the science-fiction/cyberpunk show from finding sudden popularity this summer. That was due mostly to the incredible assurance and totality of vision presented by creator Sam Esmail, who ended up creating a kind of “Fight Club” for 2015, complete with an awful real-world correlation on the day its finale was supposed to air. Ambitious and addictive, “Mr. Robot” is a unique and well-crafted journey into corporate structures and cybersecurity, and easily one of the most enjoyable binge-watches of the year.

8. “Fresh Off the Boat,” seasons one and two. Showrunner: Nahnatchka Khan. (ABC)

It’s hard to overstate the ambition of this unassuming little family sitcom, which tells the story of a Taiwanese-American family that moves to suburban Orlando in 1995. What makes the sitcom so brilliant is how prickly and complicated the Huang family is, headed by Jessica (Constance Wu) and Louis (Randall Park). They’re not cookie-cutter, but they’re not entirely idiosyncratic, either. And at its core is a lot of pain—the immigrant experience, the struggle to make ends meet with a new business, and that actual thing called structural racism, which always finds a new way to rear its ugly head. The sitcom finds ways to transmute the pain into humor, and in some ways, its failures are as compelling as its successes; the show’s roughest edges still invite warmth and intimacy. Plus, an embrace of ’90s nostalgia that includes Ol’ Dirty Bastard, Mr. T and Air Jordans.

I’m a sucker for ambitious worlds, and John Logan’s demimonde in “Penny Dreadful” always finds a way to exceed expectations. In addition to swirling fact, fantasy, history and myth together in one heady cocktail, “Penny Dreadful” has incredible performances—from Eva Green, Harry Treadaway, and Billie Piper, especially. Above all, it feels like you’ve stepped into the Victorian Gothic mindset, complete with doubts, superstitions and a pure terror of eternal damnation.

There is obviously a place on every list for “Mad Men,” a show that changed television when it debuted just seven seasons ago. The split seventh season didn’t do the story or the show any favors, but it’s hard to quarrel with episodes like “Time & Life,” which displayed the show’s powers at their considerable height. I have my quibbles with the finale, but I can at least cop to finding it the most thought-provoking of the year. I’m not sure if I’ve completely decided what it means, but I am more than happy to be left pondering such an odd but indelible vision.

Last year, if you’d told me that “The Leftovers” was going to make my list, I would have laughed all the way to January. And yet here we are, with Damon Lindelof’s post-“Lost” existential fantasy turning out a second season that made the first season retroactively much better. “The Leftovers” works with dreams, spirituality and suffering to create a show that addresses, somehow, the fundamental horrors and mysteries of being a human being. Season two zeroed in on a single strange evening of events in a place colloquially called “Miracle,” and it proved to be enough to blow the show’s potential wide open.

When people ask me for television recommendations, the show I near-universally recommend is “Black-ish.” Of the shows that focus on families of color, it’s “Black-ish” that finds the most elegant balance between humor, identity and universal constants. The Johnsons are an incredible and almost elastic family, able to withstand a lot of pressure without losing their shape. It gives them the ability to walk into (or push each other into) all kinds of situations—from gun control to heart failure to church, depending on the order of the day.

“Show me a hero, and I’ll write you a tragedy,” F. Scott Fitzgerald wrote. This HBO miniseries tells the story of Yonkers mayor Nick Wasicsko, who unexpectedly became the spokesperson for a national conversation on desegregating American neighborhoods. In the capable hands of Simon and Zorzi (who adapted Belkin’s book), a bureaucratic nightmare is turned into human drama, as a neighborhood struggles to grow up a little.

Watching “BoJack Horseman” is an experience quite unlike any other. This completely bizarre animated series took a while, in its first season, to find its voice; by season two, though, it became a surreal meditation on Hollywood, depression and aging, told through the mouth, literally, of a talking horse (voiced by Will Arnett). Perhaps because it’s so disarmingly quirky, the emotional impact of “BoJack Horseman” hit me like a ton of bricks—able to say something profound about humanity by making a lot of very silly jokes about animals.

In addition to straight-up changing the national conversation on transgender awareness, Jill Soloway’s “Transparent” has made a strong attempt to invent the female gaze and in the process created the most affecting season of television I’ve watched this year. It’s some kind of magic. And my guess is that Soloway, and “Transparent,” are nowhere close to done dazzling us.